• Curcumin, a substance found in turmeric, is witnessing rising acceptance in the pharmaceutical, food and cosmetic industries due to growing awareness on its anti-oxidant & anti-inflammatory properties.
• India is the world’s largest producer and exporter of turmeric with exports recorded at US$ 236 million in 2018.
• North America is the largest regional market for the product, while Europe is the fastest growing.
• Turmeric was ranked the second most popular supplement in the US in 2017, according to the CRN Consumer Survey on Dietary Supplements.

The mounting demand of curcumin, a substance found in turmeric, in the pharmaceutical, food and cosmetic industries is a major factor driving the growth of the global curcumin market. This rise in demand of curcumin is largely due to the growing awareness among consumers regarding its anti-oxidant and anti-inflammatory properties. Apart from this, the surging inclination of consumers towards organic products is also likely to provide an impetus to the market in coming years.

Pharmaceutical industries are aggressively trying to synthesize curcumin-based drugs in the form of capsules, powder and syrups for treatment of several illnesses like arthritis, diabetes, gastric problems, healing wounds, treating sprains, liver problems, migraine etc. It is also rapidly gaining popularity as an alternative therapy due to its anti-cancer properties. Research concludes that countries where people eat more curcumin (100mg to 200mg over long periods) have lower rates of cancer.

Turmeric or curcuma longa is commonly used in cosmetic products. In India, turmeric forms a vital ingredient in plentiful Ayurvedic medicines. It is used to treat acne, heal dry skin and eczema, and slow down the aging process. Natural cleansers, such as milk, when mixed with turmeric, serve as effective natural cosmetics. Healthy-looking skin as well as controlling and reducing formation of wrinkles and lines are some of the benefits of these cosmetics. Turmeric is also used for dyeing silk, cotton, wool, and fabrics for a yellowish shade. The dye is also used as a coloring material in rice milling and leather dyeing.

The growing utilisation of curcumin extracts in different beauty care products due to its anti-oxidant characteristics is expected to escalate the market presence further in recent years.

India is the largest manufacturer, consumer and exporter of curcumin, contributing to more than 80% of the global production, which is on account of the presence of large-scale turmeric cultivations. Even then, low consumer awareness of curcumin as a healthy ingredient domestically results in a majority of it being exported to Europe and North America. Globally, Indian turmeric is considered to be the best because of its high curcumin content.

Turmeric ranks third in the total exports of spices from India. The major importing countries of Indian turmeric are the UAE, Iran, US, Sri Lanka, Japan, UK, Malaysia and South Africa. Even though India leads in turmeric exports, it’s export quantity and value varied over the years.

On the basis of its physical form and appearance, the global curcumin market is bifurcated into powder and liquid.  Among them, powder form is expected to carry high demand in the coming years due to portability and non-perishability. Based on application, the market is segmented into brain health heart health, stress/anxiety relief, flavoring & coloring agent, anti-inflammation and antioxidant. 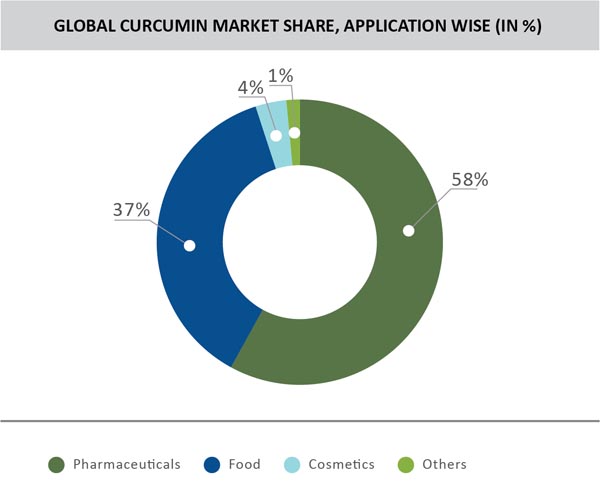 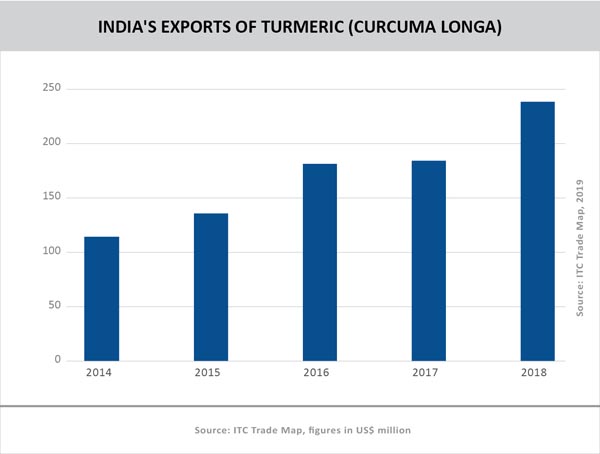 North America is the largest regional market, with a value of US$ 24 million. Growing demand for processed food products and curcumin-based health supplements is expected to drive demand in this region.

Nearly 20% of US supplement users over 55 are consuming turmeric and curcumin supplements, making it the second most popular supplement in the 2018 CRN Consumer Survey on Dietary Supplements. Turmeric milk is highly popular in the US. Prepared from cold pressed turmeric, almonds and milk, it goes by the nomenclature ‘Turmeric latte’. Turmeric was the largest selling herbal supplement in the natural products category in the US in 2017, growing by 12.2% YoY.

Europe is anticipated to be the fastest growing region, with the market estimated to surge at a revenue-based CAGR of 14.8% over the forecast period. Increasing demand from buyers, coupled with regulatory support from the European Food Safety Association (EFSA), have made curcumin a preferred pharmaceutical ingredient, thereby propelling the market.

Dear Sir,
I have company in in India ( Abhishek international) export import I am seller.
All types of spices. And Turmeric.

I’ve come to believe that our alignment well with both your company’s immediate needs and ultimate goals.
Given how well our product suits your needs, I think we could do some great work together.
I’m wondering if you might be open to an initial conversation to gauge a fit.
Kindly connect with me at sgenterprises.pg@gmail.com.

Hi you can reach me on shitole.corp@gmail.com
For your turmeric & based products.

I have cultivated abt 8 hac Turmeric which is nearing harvest.Any buyers can contact me 9446362794 I am in Kerala

Yes pls send me such type of articles

I am from Maharashtra.
We’re farmers group growing certified organic turmeric finger and powder. Curcumin above 9.6%

i have organic best quality turmeric finger of 10 tons avaliavble with me, kindly contact me for any requirement. anilg895255@gmail.com