The Cashew tree (Anacardiumoccidentale) is considered the native to the northern part of South America, but is now grown almost all over the world. The English name ‘Cashew’ is derived from the Portuguese name ‘Caju’, it is called ‘Acaju’ in Brazil, ‘Merey’ in Venezuela, ‘Cajuil’ in Spanish and ‘Decajou’ in French. Cashew was introduced to India by the Portuguese between 1563 and 1570.
As per the annual report 2016-17 of Ministry of Agriculture and Farmer Welfare, cashew is one of the top 10 most traded (i.e. exported as well as imported) agricultural products of India.
The major cashew production distribution in India is in the states of Kerala, Karnataka, Goa and Maharashtra along the West Coast, Tamil Nadu, Andhra Pradesh and Orissa along the East Coast and some in the states of West Bengal, Chhattisgarh, Gujarat, Jharkhand and North Eastern States. The production and productivity of cashew is highest in the state of Maharashtra. Cashew generates employment in the processing and agrarian sector of India employing over 3 lakh persons with more than 95% of them being women.
India led the production of cashews in 2015-16 with a crop of 1,72,719 tonnes (kernel basis), which represented 23 per cent of global production but recently India’s share in the world cashew nut market remained stagnant at 23 per cent, while 58 per cent is now been controlled by Vietnam.

The cashew nut industry is broadly divided into the following categories:
1. Cashew nuts kernel (in shell)
India’s total export for Cashew nuts kernel (in shell) to the world in 2017 were US$ 16.3 million while import were US$ 1453.1 million. Major countries to which India is exporting were Vietnam (US$ 15 million) and Côte d’Ivoire (US$ 1 million) while importing from Côte d’Ivoire (US$ 301 million), Tanzania (US$ 301 million) and Guinea-Bissau (US$ 254 million). 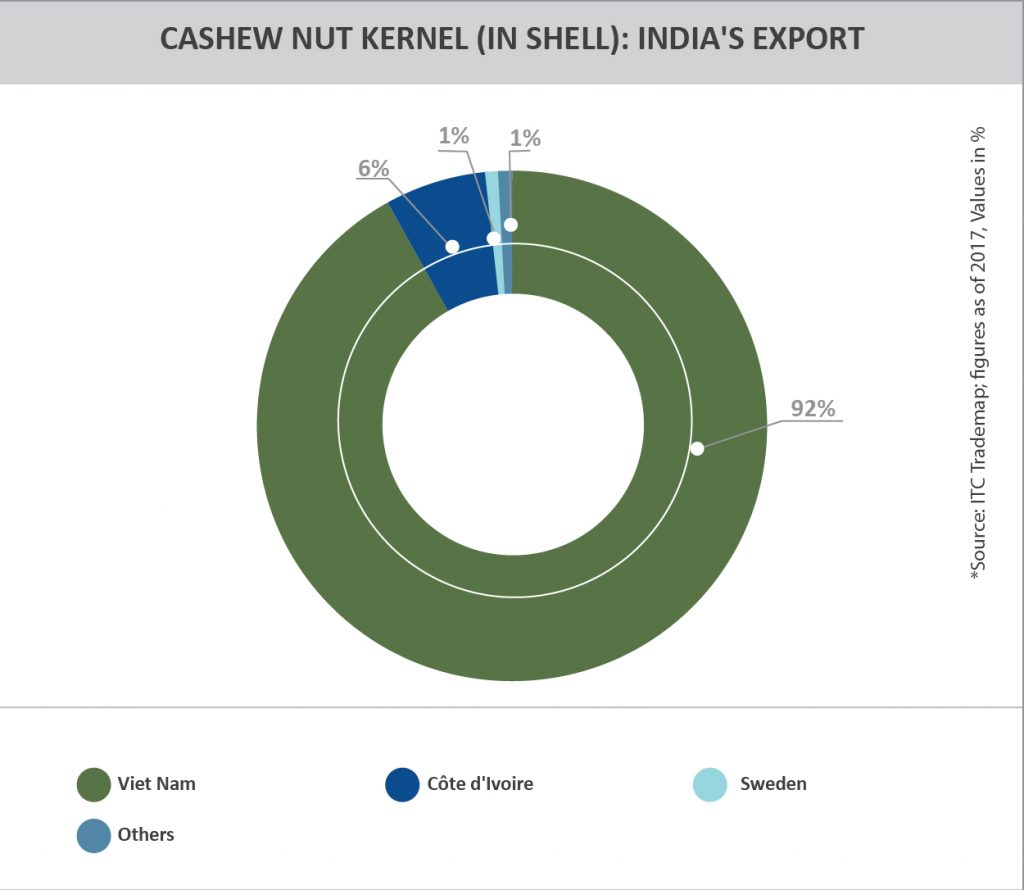 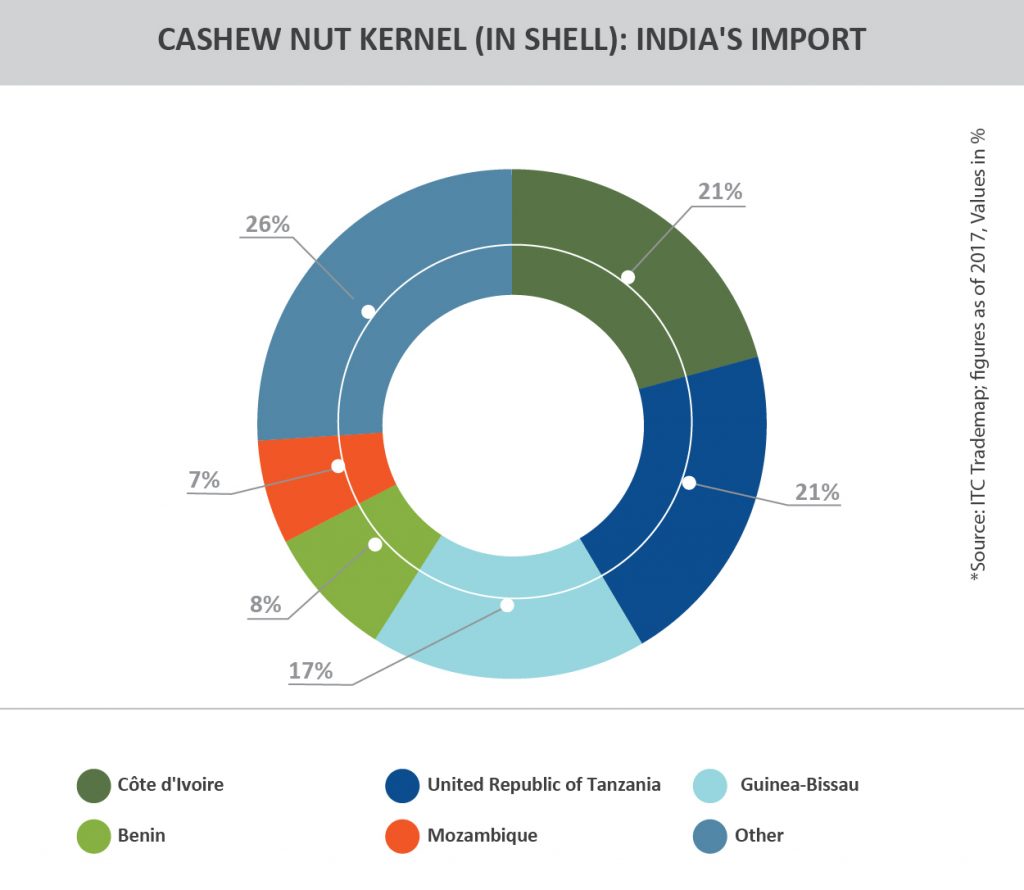 2. Cashew nuts kernel (broken, shelled)
India’s total export for Cashew nuts kernel (broken, shelled) to the world in 2017 were US$ 934.4 million while import were US$ 40.9 million. Major countries to which India is exporting were UAE (US$ 195 million), USA (US$ 182 million) and Netherlands (US$87 million) while importing primarily from Vietnam (US$ 40 million). 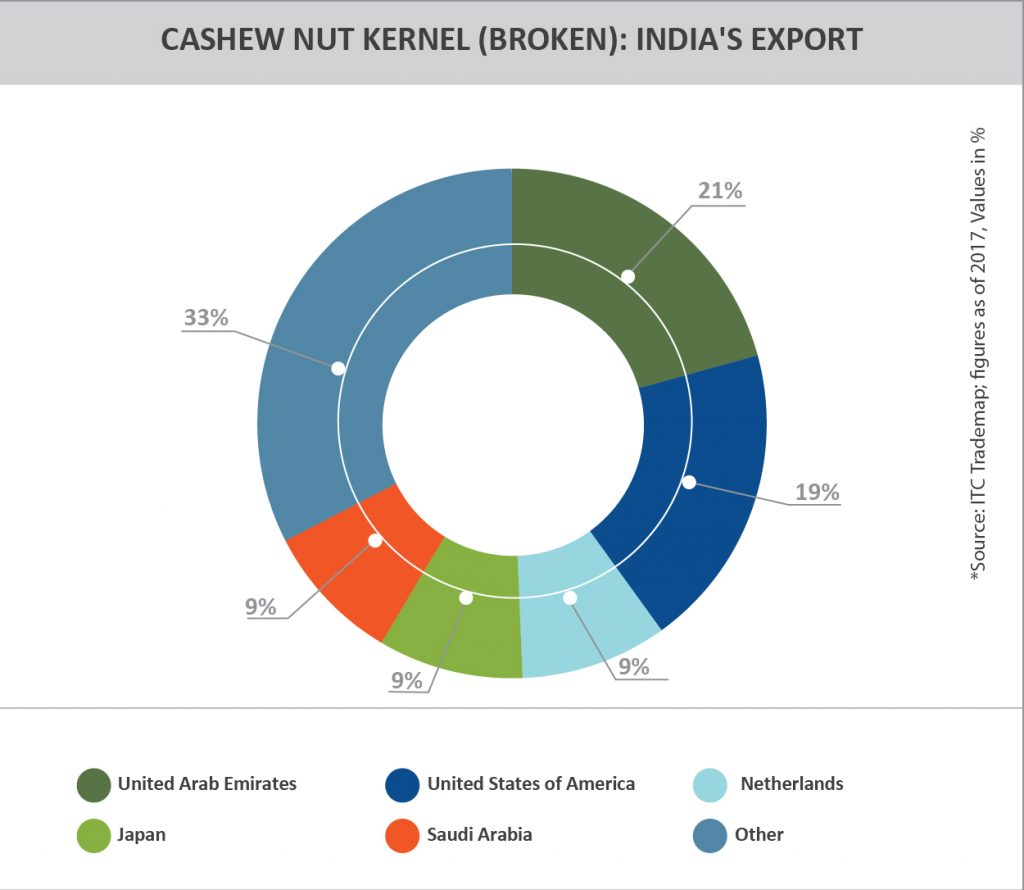 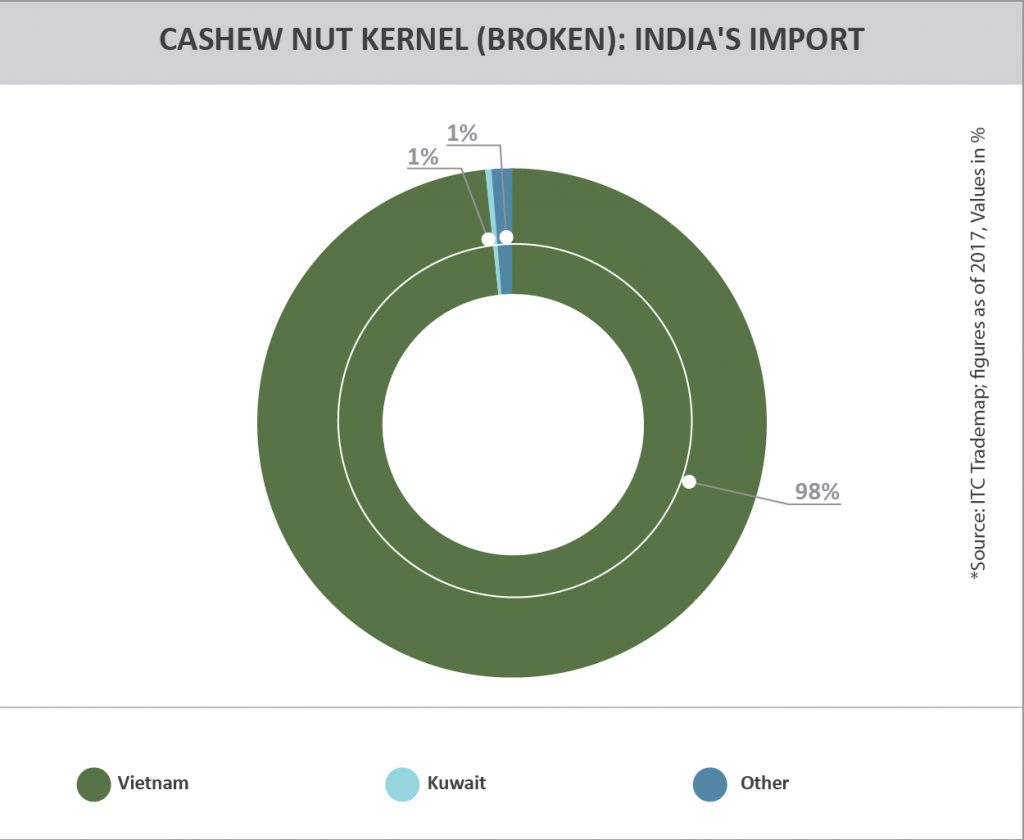 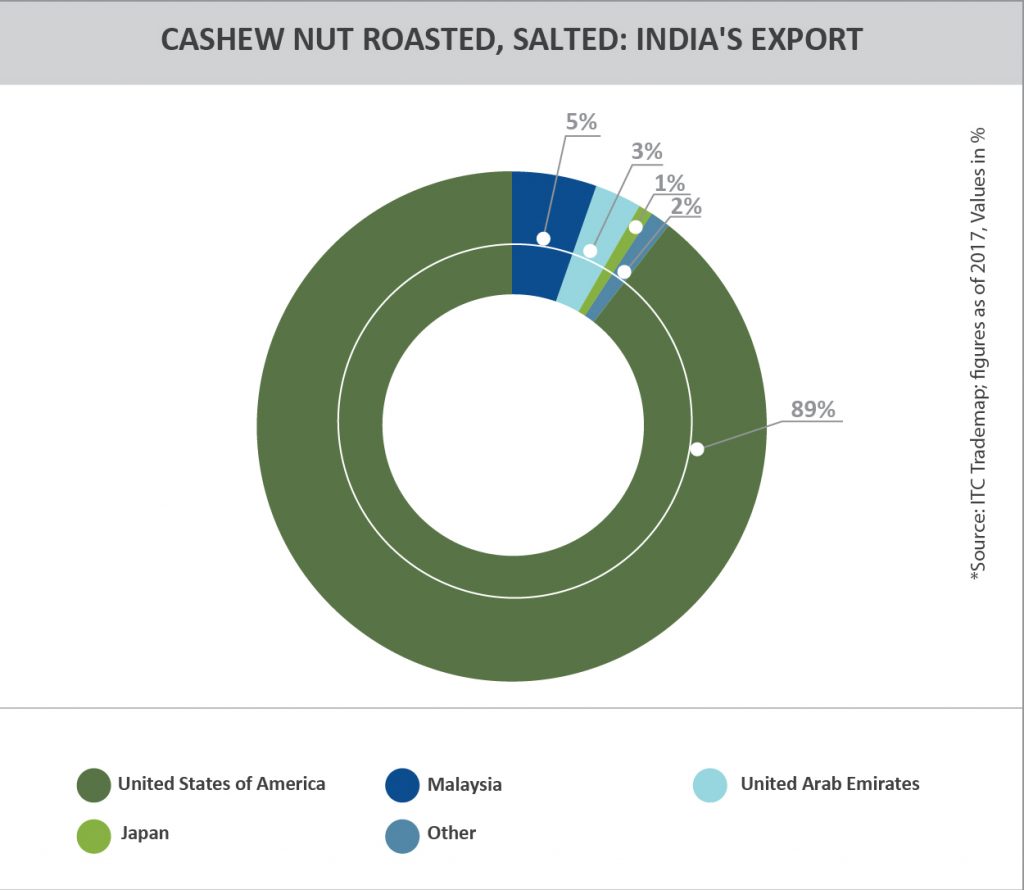 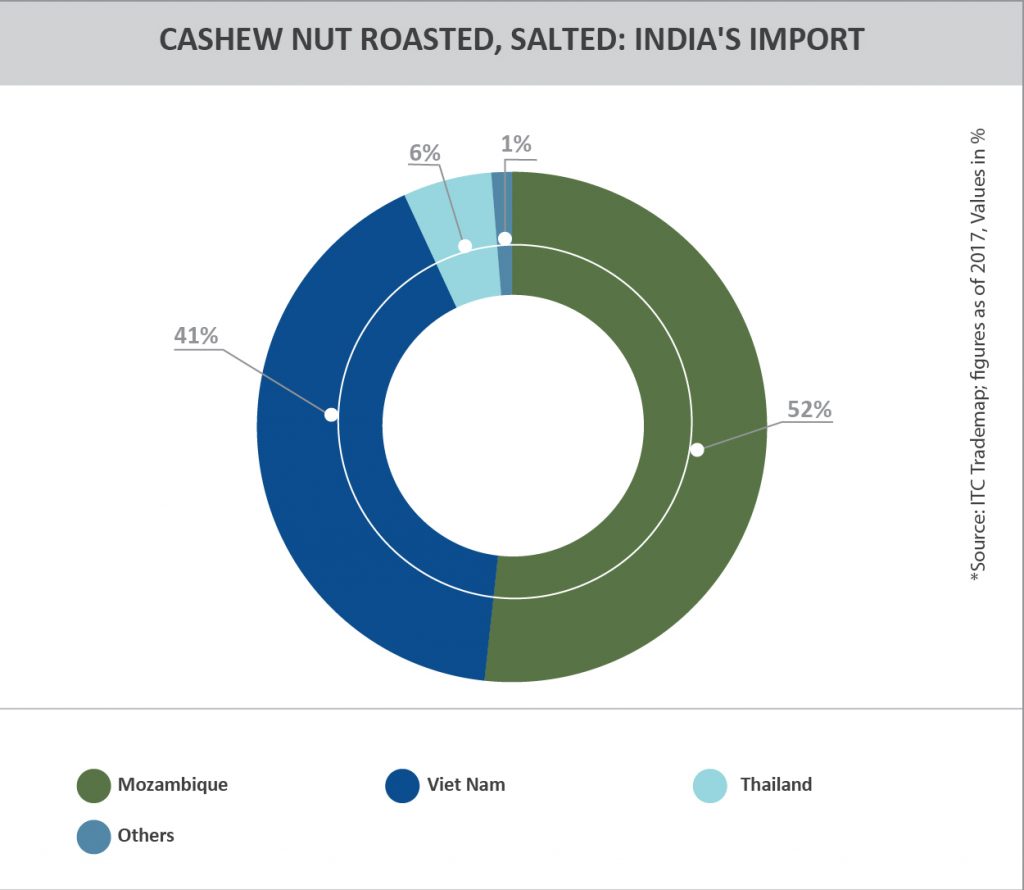 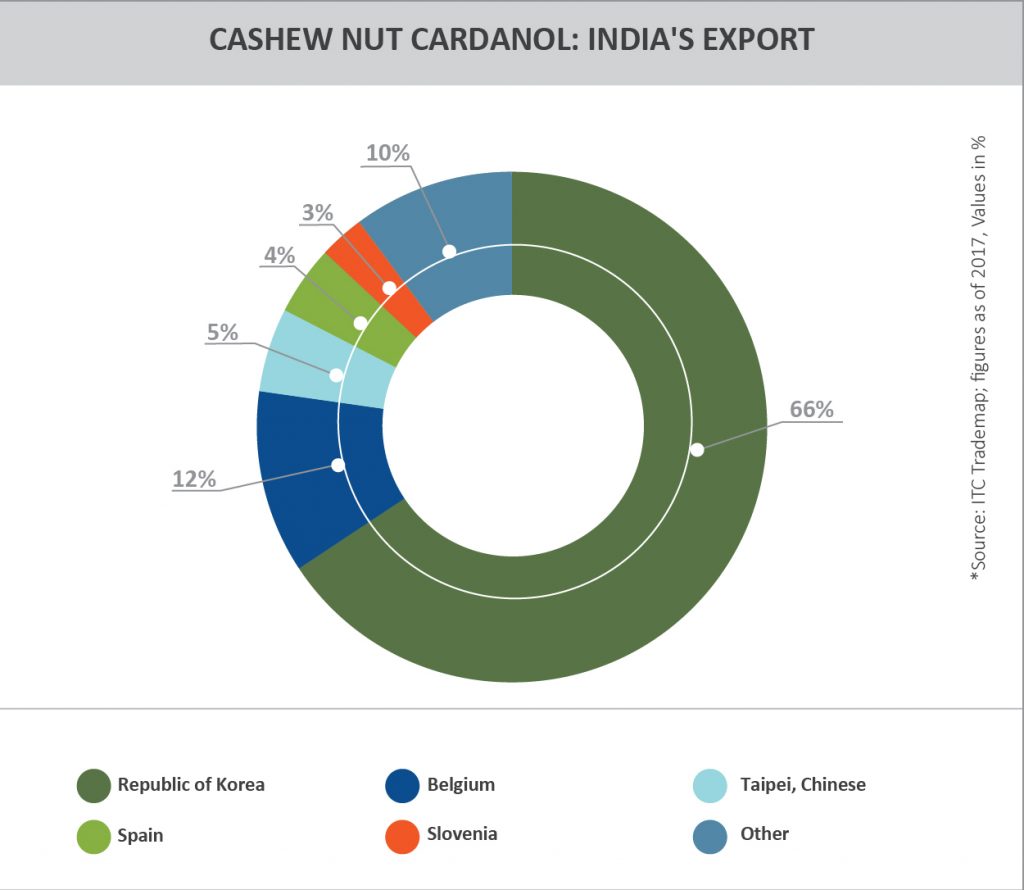 The cashew tree plays an important role in maintaining the ecological balance of the dry regions, the cashew tree is multi-functional: apart from exportable cashew nuts, it supplies timber, firewood, medicines, fodder, etc. By-products from cashew offer opportunities for development of local industry; the world market for cashews is dynamic, with sustained growth rates of approximately 10% per year. Various value added products such as juice, fenny, wine, dried cashew apple, syrup and jam can be prepared from cashew apple which paves the wave for the development of cashew based industry and economic development of our country.

nice blog . As we know cashew nuts , peanuts , soyabean are very healthy and Dakshoverseas is leading Suppliers of Raw Cashewnuts providing the best quality of raw cashew nuts in bulk quantity to our clients as per their requirements.https://bi