• The global almond market is expected to grow at a CAGR of 7.1% during 2019-2028.
• Growth is driven by increasing health consciousness, as well as rising popularity of products like almond milk, almond butter, etc.
• US is the top exporter of almonds globally, while India is the leading importer in value terms.
• The almond snack market in India is projected to reach a size of Rs 1 billion by 2024. World almond consumption has burgeoned by 10% each year over the last five years and we are seeing significant development in demand across both developing and developed markets.

In the US alone, almond consumption has surged at a CAGR of 7.5% over the same period and we observe strong indicators that sustained growth will continue in developing markets such as India and China. This robust growth is primarily led by a rising demand for healthier foods worldwide.

Consequently, the industry is seeing new opportunities in terms of products, methods of use and application. These include the use of almonds in almond butter, salad toppings, almond milk, confectionery fillings as well as health and energy bars amongst others products.

As the developing world is getting inclined towards more protein-rich diets, almonds are becoming less of a luxury and more of a necessity. In an analogous way in developed markets, almonds are now a preferred choice as a healthy snack as more and more studies validate its health and nutritional benefits. This is also seen as a growing desire to counter common lifestyle issues such as heart disease, high cholesterol, weight gain and diabetes in the present milieu.

The US is the leading producer and exporter of almonds globally. California accounts for 80% of global almond production, out of which 33% is consumed by US and Canada. 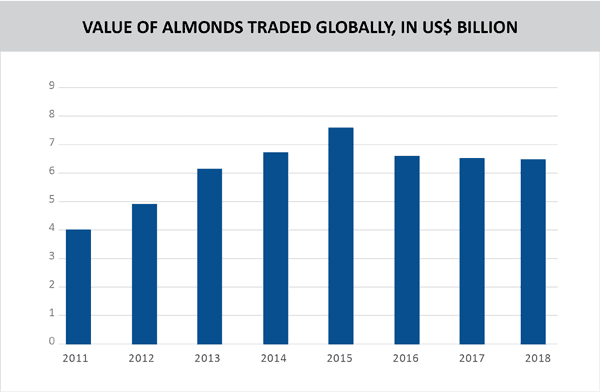 The growing health consciousness of Indian consumers and their rising purchasing power only augurs well for almond consumption in India. Almonds are consumed not only as a raw whole product or salted, but are also commonly used in several Indian sweets as well as in the popular “badam milk”. It is now also finding a lot of application in health drinks, biscuits and ice cream.

Breakfast cereals, chocolates, biscuits and ice creams are also increasingly using almonds. India is also set to see rise in imports of some derivative products of almonds like almond milk, flour and butter.

The almond snack market is forecasted to become a Rs 1 billion industry in India by 2024. Promoting almonds as a healthy snack will help boost sales. Application of monopsony power by large intermediaries in agricultural markets can be particularly harmful in poor countries where farmers often live close to the poverty line.

But in India, where almonds are cultivated at an extremely miniscule level, there is no need to be concerned. In fact, India has an upper edge in terms of bargaining power and designing import policies for almonds.

Recently, Indian authorities have announced that they will delay imposing tariff hikes on US products, signalling a safe play. But over time, India should look forward to diversifying its almond imports as demand grows further and leverage its monopsony power as a major buyer.