Poultry Sector: Count your chicken before they hatch! 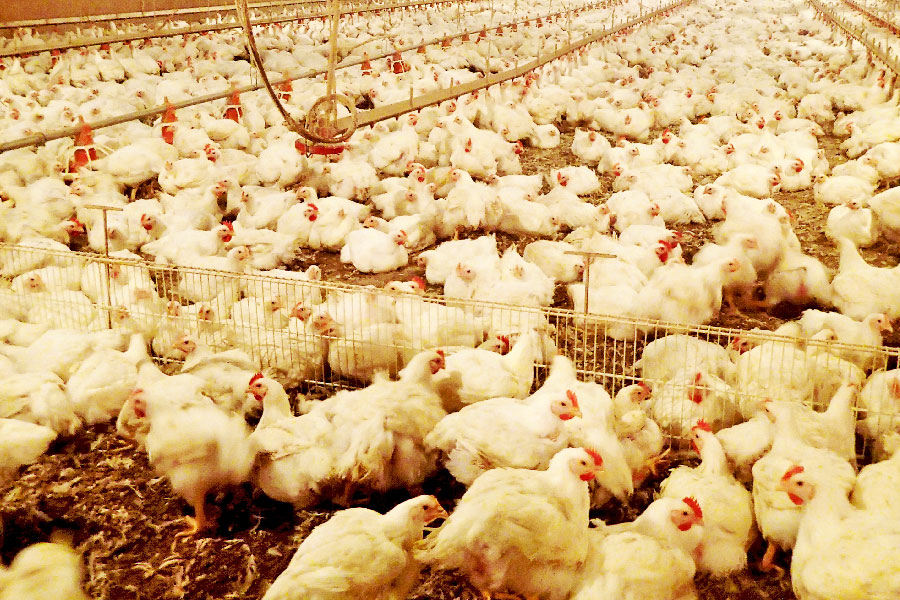 This production comes from three kinds of farms:

(a) Breeding farms which hatch and raise poultry for sale to other farms;
(b) Broiler farms that rear chickens for their meat; and
(c) Layer farms that keep hens to produce eggs.

These findings are substantiated by the latest livestock census, according to which in 2019, the total poultry in India is 851.81 million, recording a 16.8% growth over the previous census. Of this, backyard poultry constituted 317.07 million (registering a rise by around 46%) while commercial poultry contributed 534.74 million (increasing by just 4.5%). Tamil Nadu, Andhra Pradesh, Telangana, West Bengal, Maharashtra, Karnataka, Assam, Haryana, Kerala and Odisha are the top poultry producing states in India according to the census.

Given its impressive growth, India has catapulted itself as the world’s third-largest egg producer, after China and the USA; while it is the fourth-largest chicken producer in the world after China, Brazil and the US. According to APEDA, India exported 3,50,817.80 MT of poultry products to the world for the worth US$ 80.34 million during the year 2019-20. The primary destinations for its exports are Oman, Maldives, Indonesia, Russia and Vietnam Soc Rep. The figure, however, is quite low as compared to India’s poultry exports in the 2018-19 period (US$ 98.44 million) and 2017-18 (US$ 85.72 million). We look at some of the major challenges contributing to relatively weak poultry exports for India: 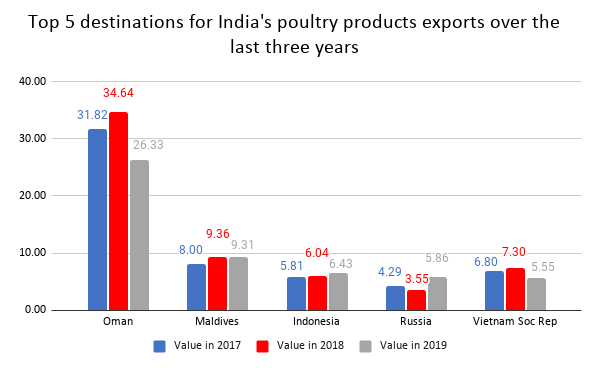 Source: APEDA; Value in US$ million

Stumbled by the stumbling blocks?

The poultry sector in India is fraught with a number of challenges:

The production strategies followed by Indian farmers are not in line with international standards, since a substantial number of poultry farms are congested and under regulated environment. Further, they are kept under continuous lighting so that they lay more eggs daily. What makes the situation problematic is that the farms where these birds are reared are licensed by the municipal officials who lack the knowledge, expertise and human resources to strictly enforce quality standards.

At the same time, chemicals and substances like baking soda and ammonium chloride are added to the food. This is due to the fact that Indian farmers want to attain high production, with a minimum of money. Owing to unhygienic rearing practices and lack of quality control measures, Indian eggs often face rejections.

b) High use of chemicals and drugs

Another cause of concern in the poultry sector is that chemicals and medicines are added to animal feed to in order to boost yields and obtain better looking eggs. Ammonium chloride, potassium chloride and baking soda are some of the substances commonly added to poultry feed for these reasons. This is leading to the high predominance of antimicrobial drug resistance (AMR) among animals. According to Ramanan Laxminarayan, director of the Centre for Disease Dynamics, Economics and Policy (CDDEP), India and China have the highest levels of antimicrobial resistance (AMR) in animals. Not only does this negatively impact animal health and farmer productivity, it also has serious repercussions on human health.

When the US government urged the Indian government to slash customs duty on chicken legs, domestic poultry farmers panicked at the prospects of dumping of these legs (which are way less consumed in the US as compared to chicken breast) in India at a throwaway price. They were also apprehensive that this will create an adverse sentiment in the domestic market, resulting in loss of livelihoods and put lakhs of farmers to insurmountable financial difficulties.

Studies have found that birds are subjected to unhygienic and harsh conditions and this could degrade the quality of the produce, leading to many birds losing their lives. Lack of dry processing and cold chain facilities make it logistically outlandish to be transporting good quality poultry produce within India. At the same time, there is a paucity of ample dry processing capabilities in the Indian market, as domestic consumers prefer to go for freshly culled birds. In addition to this, there are limited facilities for storage which, could lead to severe losses.

e) Lack of harmonization of standards

f) Smitten by the virus

In addition to the above challenges, the poultry sector was severely impacted this year by speculations that consumption of poultry products might lead to the spread of coronavirus. This significantly impacted the industry, which is estimates to have suffered losses to the tune of Rs 20,000 crore, with a loss of around Rs 15,000 crore in the broiler segment alone and the rest by egg producers. This dip in consumption resulted in a price crash, with the industry asking the government for support. Now that these rumours have been dispelled and consumers turn to this cheap source of protein to boost their immunity, the industry hopes to recover soon.

Roadmap for the future

To sum up, albeit India is one of the leading poultry producers in the world, its poultry exports to other countries are low. This is on account of a string of factors such as high production costs, insufficient marketing infrastructure, limited processed poultry production, restrictive sanitary import regulations and Indian consumers’ general preference for freshly culled birds. The onset of COVID-19 and rumors about transmission of virus through animals also took a toll on the sector this year.

To address some of these challenges, the government has on its part undertaken some remedial measures. For example, meat processing is licensed under the FSSAI’s Food Safety and Standards Regulations. Similarly, the Ministry for Food Processing laid out the guidelines for modernising abattoirs and designed a scheme for providing integrated cold chain and preservation infrastructure facilities, without any break, from the farm gate to the consumer. The government has allowed 100% FDI through automatic route in food processing sector to encourage foreign players to invest in this sector.

Besides these steps, there needs to be a skill development programme which educates poultry famers and municipal officials about the best rearing practices. This should encompass everything from the ideal conditions for a poultry farm, to the components of animal feed and the inoculation of vaccines to animals that keep diseases like avian flu at bay, without posing the threat of AMR.

This is also an area of work for animal researchers since AMR poses a threat to the entire human race and it therefore needs to be checked in animals. Establishing more veterinary research institutes will help encourage research. Surprise checks by officials and setting more stringent standards for testing could also improve the quality of the yield. This would significantly improve the quality of Indian poultry and help it meet international standards.

Another thing that needs to be done is to boost the production of corn and soyabean – two natural sources of animal feed. A higher yield would help bring down the soaring prices of the crops and therefore, help in making the poultry industry more competitive. In addition, alternative protein sources and dietary supplements can be developed by the indigenous industry by collaborating with foreign players through Make in India. Single-cell protein products such as algae, bacteria and yeasts are showing promising results and can be explored for the same purpose.

Lastly, given the rising poultry production in the country, efforts must be given to have robust poultry infrastructure in place. Chain-feeder technology, air quality monitoring, LED light level control and innovative waste management methods are some of the things that need to be incorporated.

Enquiry for Poultry Sector: Count your chicken before they hatch!