Potatoes are one of the most important food crops being consumed in the world. Globally, two categories of potatoes are being consumed, the fresh potato and the chilled potato. The demand for potatoes is increasing worldwide and India is endeavouring to become a big player in this market.

Potatoes are one of the world’s most commonly grown and third most important food crop (after rice and wheat), being regularly consumed by billions of people. It is vegetatively propagated, which means that a new plant can be grown from a potato or piece of potato called a “seed”. This temperate crop was first cultivated around 200 B.C. by the Inca Indians in Peru. From the Andes, it spread to the rest of the world after the Europeans encountered America in the late 1400s and early 1500s. It is also an excellent source of carbohydrates, protein, vitamins (especially Vitamin C and Vitamin B6), and minerals (especially iron and potassium). It contains almost no fat, and is low in calories.

Potato is resistant to drought and cold conditions. It has wide adaptability. The soil and climate conditions in most parts of the world are suitably conducive for its growth. In 2020, potatoes were cultivated on more than 20 million hectares in 150 countries for a total global output of 359 million tonnes. The largest potato-producing countries in the year 2020 were China, India, Ukraine, Russia, United States, and Germany, in that order.

Potatoes provide starch, flour, glucose, alcohol, dextrin (low-molecular-weight carbohydrates produced by the hydrolysis of starch), and the livestock fodder. Potato starch (farina) is used in laundries and for sizing yarn in textile mills. As a food product itself, potatoes are converted into dried products such as ‘potato chips’, ‘sliced’ or ‘shredded potatoes’.

Unless they are processed, potatoes are highly perishable once harvested, which limits the opportunities for trade and storage. Worldwide 2 main categories of potatoes are traded- fresh potatoes and chilled potatoes. Around the world about 50% of potatoes are used as household staple food or vegetables. The rest are processed into potato food products and food ingredients, fed to the livestock, processed into starch for industry and re-used as seed tubers for the producing the next season’s potato crop.

With the rising production, the consumption of potatoes across many countries in the world is also increasing. This is anticipated to boost and support the market growth for potatoes in years to come. As compared to other regions the Asia-Pacific is the largest and the fastest growing market for potatoes. The countries of Asia-Pacific region can supply fresh potatoes year round because potatoes are grown throughout the year in one or the other part of the region, unlike the European countries where potatoes are grown only during the summer months. By 2030, the global potato yield is expected to reach 24.3 tons/ha, according to the FAO. The total potato production of the world is expected to reach 750 million tons by 2030, of which the production of Asia, Africa and Latin America will account for 440 million tons.

India is not a big player in potato exports. India’s share in world potato-export in the year 2021 was only 1.7%.  In the global export of potatoes, India presently occupies the 15th spot. India exported over US$ 70 million worth potatoes in 2021. A slight decline in potato export was seen during Covid-19 pandemic crisis, in the years 2020 and 2021.

The potato export from India in last 5 year is shown in the table as follows. 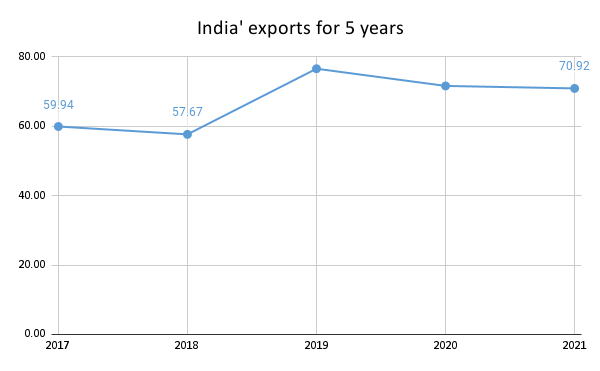 India to boost export of potatoes

In a move to boost potato export, the government declared potato as a ‘non-notified’ farm produce with an aim to ease import process of developed seeds to boost exports of this tuber crop as it was being requested by the exporters and industries to import quality and modern potato seeds from the global market for enhancing competitiveness of Indian potatoes. India looks forward to the markets with greatest potential for expanding its exports of seed potato (HS Code 070110) – Egypt, Iraq, Saudi Arabia, Syria, Qatar and Sudan. The export of fresh potatoes (HS Code 070190) may be further expanded to Nepal, United Arab Emirates, Viet Nam, Sri Lanka, Malaysia and Singapore, the countries having great potential for importing Indian Potatoes.

The government’s focus on agriculture, will enable much desired growth and development in horticulture and organic farming. Indian farmers are being encouraged to adopt cutting edge farming technology that is incentivised by the government. The Government has launched Mission for Integrated Development of Horticulture (MIDH) which is a centrally sponsored scheme for the holistic growth of the horticulture sector that embraces fruits, vegetables, root & tubers and other horticulture crops. This increased technological integration, combined with India’s weather which is conducive for potato crop and easing of the import process of highly developed potato seeds, would enable India to achieve new export milestones and strengthen the brand-India in the global potato market.

Enquiry for Potatoes – The wholesome food