Oxygen Shortage: A crisis that breeds an opportunity

Despite having capacity to produce 7,000 MT oxygen per day, India is facing acute shortage as it is not able to reach those who need it. To deal with the issue, cryogenic cylinders have been imported while industries have raised their production to supply LMO to hospitals. New production plants are being set up to make O2 available at district level. This may also offer India a strong export market potential in the immediate term. 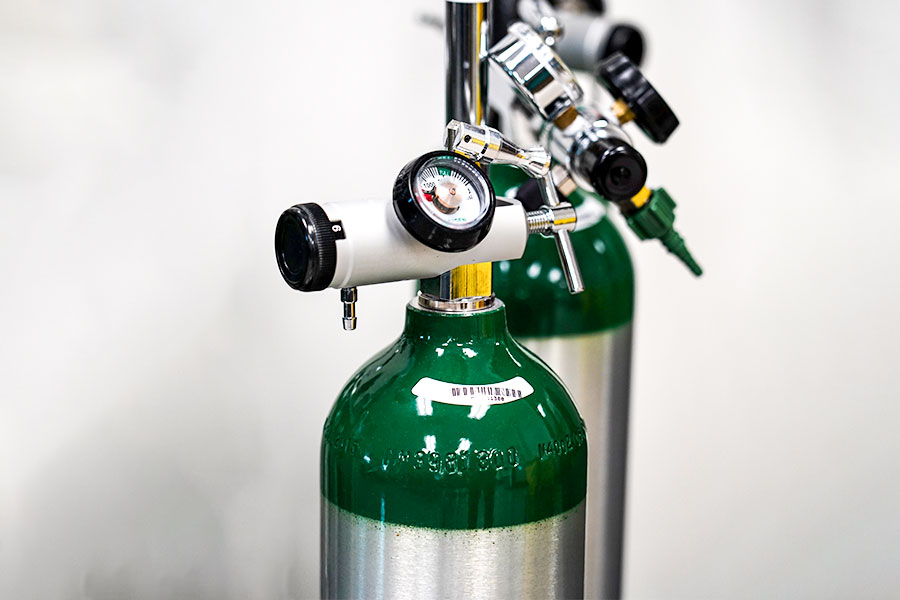 Amid the second wave of COVID-19 in India, the country is battling through one more added crisis i.e., severe shortage of medical oxygen. Demand of Oxygen in India has been continuously rising with the medical oxygen consumption in the country reaching 3842 MTs as on 12th April 2021, that is 54% of the daily production capacity.

The states of Maharashtra, Gujarat, Madhya Pradesh, Uttar Pradesh, Karnataka & Tamil Nadu constitute maximum consumption of medical oxygen in the country, while Chhattisgarh, Punjab and Rajasthan too are not far behind in this battle for breath. Thus, panic-stricken hospitals are approaching courts for late night emergency hearings for the uninterrupted supply of the life saving gas, while international organizations are raising funds to help the country overcome this calamity.

According to a report, this demand had risen to 8,280 MT as on 24th April’ 2021. However, with the quickly escalating demand not being met with an equal supply, hospitals in many states have issued SOS messages as their oxygen availability has touched the reserve level. Death rates have increased as people are dying due to lack of oxygen. Adding to the chaos are skyrocketing prices for the gas and equipment as demand surges. Price of a portable O2 cylinder has risen by 20-30%.

What are the causes of shortage?

Monthly export data shows that India’s export of oxygen during April-Jan 2021 has been significantly high at 9,301 MT, witnessing a 129.21% year over year (yoy) increase. The largest buyer for India’s oxygen was Bangladesh, which bought 94.9% of the exported quantity in 2020-21 (April-January). The exported oxygen is industrial oxygen (HS Code: 28044010). However, the question is whether the export could have caused the shortage at this large scale? The answer – it is not likely since the exported quantity is only 0.4% of the production capacity of the country. Oxygen production capacity of India is  7,127 MT per day. 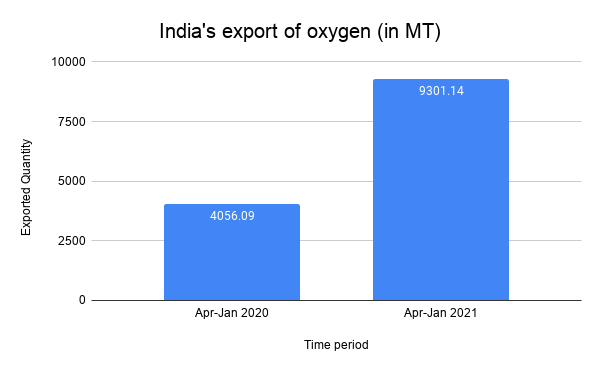 On the other hand, there are other factors, apart from exports, impacting the supply of O2.

To transport oxygen, cryogenic containers are required. However, the country does not have them in sufficient quantity to meet the demand of the states in time. Thus, oxygen from the plants and surplus states (such as Kerala) has been difficult to transfer to the states where demand is high (such as Maharashtra, Gujarat and MP).

India’s major oxygen production capacity is in the East region, while the states gasping for the gas are in the West. Furthermore, trucks are also not sufficient in numbers to transport the oxygen. To meet this rising demand, India has been arranging containers from other countries. On April 27, 2021, the Ministry of Health reported that 20 cryogenic ISO containers with capacity of 20 MT and 10 MT have been imported to increase transportation of oxygen. Furthermore, private companies are also putting efforts to ease the transportation.

Another hurdle to meet the demand is infrastructure of the hospitals. Most small and medium sized hospitals store oxygen in cylinders, not bullets. MS Unnikrishnan, CEO of Thermax, commented,

The biggest challenge is oxygen is stored in liquified condition (in industries) and not in the gaseous condition. So liquefied oxygen will be transported in bullets and especially trucks. Large hospitals may have bullets, but most small and medium-sized hospitals (where there is a dire need of oxygen) use cylinders.

Similarly, many government hospitals also don’t have a copper pipeline to connect and supply oxygen; instead they store oxygen in cylinders. With shortage of cylinders, these hospitals have to wait for days before they receive the oxygen.

Support to meet the demand

Other than being used for medical purposes, oxygen is also used in industries. Some such industries are pharmaceutical, petroleum refineries, steel plants, wastewater treatment plants, food and water purification and process industries. However, in order to meet the shortage, the government has restricted any non-medical use of the liquid oxygen.

Furthermore, working on the directions of the Indian government, the industry also has come to support the health sector by supplying oxygen to meet the shortage. Corporations including Tata Group, Reliance industries and JSW Steel are supplying liquid oxygen to the states. Tata Steel reported that it has increased its supply of LMO to 600 tonnes a day from 300 tonnes previously. JSW Steel is expected to supply more than 20,000 tonnes of oxygen during April from all its plants.

Industries, majorly steel plants, use the gaseous oxygen in their production. Medical oxygen is free from any impurities or other gases, reaching at least 99.5% purity. Liquid oxygen can be carried in cylinders to transport, with one litre LMO equal to 800 litres in form of normal gas. Further efforts have been made to meet the demand by supplying oxygen to states through railways’ Ro-Ro service. For island territories of the country, ‘oxygen express’ ships of Indian Navy are supplying the oxygen cylinders and other essential items to fight the second wave of COVID-19.

Other than importing the required equipment, government is also importing oxygen and vaccines from other countries, while exempting these imports from custom duty. Indian government has announced the plan to set up 500 Pressure Swing Adsorption (PSA) plants in public health facilities using the PM Care fund. These plants will be developed by the Defense Research and Development Organization (DRDO) in the next three months to make the oxygen available at district levels. Efforts have been made to making the supply of the oxygen easier, as this is the biggest issue causing the severe shortage of life saving gas in the country.

India’s production capacity as on April, 2021 has increased to 9,103 metric tonnes, as reported by the Ministry of Home Affairs. Now, with the setting up of PSA plants where one plant is designed with the capacity of producing 1000 litres of oxygen per minute, the production is expected to be increased further.

Through the ability to diagnose hypoxia (deficiency of oxygen) with the availability of equipment and life saving gas, it is an investment in closing the oxygen access gap. In short term, the demand is high from low and middle income countries with more than half a million patients requiring oxygen everyday in these countries. In long term, with the industries driving the growth, it is evident that the increasing production has potential market in the future.

This is expected to continue, as the vaccination roll out is slow. Nepal, the second largest buyer of Indian oxygen, is also facing shortage of oxygen due to shortage of equipment such as cylinders. Bangladesh has also halted the industrial use of oxygen, as the supply from India stopped. Thus, clearly, the product is currently in excess demand across many developing and least developed countries while supply is limited.

Apart from this, industries such as agriculture, ship building, space explorations, automobiles, construction equipment, beverages, chemicals, food, glass, medicine, steel manufacture etc. need stable oxygen for their processes, which are contributing to the rising demand for the gas in the world. During 2020, in the Industrial gas market worldwide, oxygen had the biggest share in revenue at 28.1%.

Region wise, Asia Pacific region accounts for most of the demand, owing to its growth of manufacturing and health care sector. Furthermore, growth in the mineral and mining processing is also driving the market for the product in the region. The unfortunate crisis for the world is further creating strong potential of growth for oxygen given the increase in health care spending worldwide. Just like PPEs in the first wave, India can position itself well in this high-demand export market by ramping up its capacity.

Yes, first wave had seen many innovations from India , this 2nd wave will see innovations in oxygen therapy/ systems.

Enquiry for Oxygen Shortage: A crisis that breeds an opportunity