Non-tariff measures have been on a consistent rise across the world, leading to significant costs for exporters. Easing them will be even more critical now to ensure a quicker post-COVID recovery.

• From 1995 till date there has been definitely a significant reduction in import tariff rates across most of the tariff lines of all WTO members. But at the same time there has been proliferation of the implementation of Non-tariff measures. In fact, majority of the NTMs were implemented in last two decades.
• World’s average frequency ratio & coverage ratio for imports are 43.04% and 71.98% respectively impacting US$ 7.14 trillion worth of world’s imports.
• Generally developed nations have higher coverage ratios than developing or LDCs because of their affordability and competitive level of technical knowhow. For India, NTM coverage ratio is 45.52% which is way lesser than the world’s average indicating our position is relatively modest.
• Harmonisation in implementing NTMs can only be attained when all countries adopt same standards. The general principles of the Codex Alimentarius specify the ways in which member countries may “accept” Codex standards. 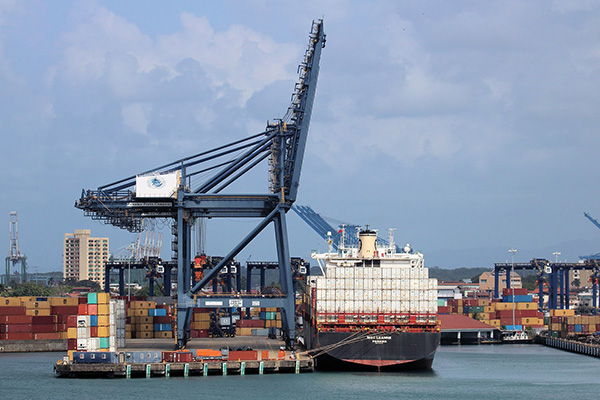 The formation of GATT (General Agreement on Tariffs and Trade) in 1947 aimed to liberalize trade and provide opportunities for developing and least developed nations. But due to the growing conflict of interests between developed and developing economies, GATT was dissolved after Uruguay round of negotiation. From 1947 till 1989, there was no commonly accepted definition of NTMs. It was only, when UNCTAD established the Group of Eminent Persons on Non-tariff measures (NTMs) and the Multi-Agency Support Team (MAST), that this broad but widely accepted concept of NTMs emerged post the formation of the WTO (World Trade Organization).

There is one major observation from arguments in this significant field of research. From 1995 till date, there has definitely been a significant reduction in import tariff rates across most tariff lines of all WTO members. But at the same time, there has been a proliferation in implementation of non-tariff measures. In fact, a majority of the NTMs were implemented in the last two decades.

It is cogent that, high frequency of NTMs comes at a high cost to international trade. Complying with these NTMs increases cost of exports; especially due to the variability of measures across countries, which hurts price competitiveness of stakeholders. NTMs are exempted from WTO-SPS (World Trade Organization-Sanitary & Phytosanitary) agreement unlike import tariffs. So economies are increasing the number of NTMs to protect domestic competition in the name of protecting “animal health”, “human health” and “environment”

Source: Calculations based on TRAINS UNCTAD Database; figures are cumulative in %

According to the calculations, SPS (sanitary & phytosanitary) and TBT (technical barriers to trade) comprise approximately 40% of total NTMs. Rest belongs to the categories as explained below, which impacts competitiveness directly. This clearly raises the question on trade liberalization if we view it from the lens of NTMs.

Categories of NTMs other than SPS and TBT

As discussed, the average import tariff of world declined after the formation of WTO from 8.57% to 2.55%. This indicator reflects that in past two decades, nations have reduced the ad velorem equivalent tariff as per WTO framework. Graphical representation for the same is provided below.

Source: World Bank, figures are in %

Now, let’s take an analytical look at  the indices of non-tariff measures, which are calculated based on UNCTAD TRAINS database, which is dedicatedly maintained for NTMs. The most conventional tool applied for quantifying the incidence of Non-Tariff Measures is the frequency index, which shows the number of tariff lines covered by various NTMs as discussed above. The crucial element of the index is a dummy variable that takes the value of unity if one or more index is applied to them. The natural extension of the index is an import coverage index that weights the existing NTM structure on home country imports or world imports. The frequency index can be computed as follows:

Where Ni is the transaction ‘i’, Di is a dummy variable that takes the value if one or more NTB is applied to this transaction (or zero if otherwise) and Ni is the total number of transactions in the product groups. Thus, Fj is a frequency index measure showing the percentage of transactions (i.e. imports of a tariff line product from a given country).

A second index showing the share of total imports subject to NTMs can also be computed as follows:

Where Vi represents the value of imports in tariff line item ‘i’ in the year under consideration, and Di is a Dummy variable that takes a value of unity if an NTB is applied in that year and zero otherwise. It is similar to the frequency index, but instead of the dummy for each product imported, the trade value (Vi) for each product is used (more commonly, imports).

Table: NTM indices of major economies and value of export & imports getting affected by implementing NTMs as per latest figures available 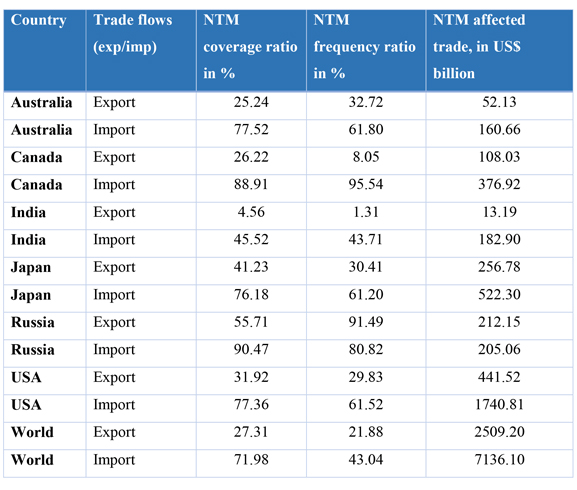 Calculations based on UNCTAD TRAINS database

According to the table it is clear that when it comes to imports, all countries try to levy more NTMs than when it comes to exports. Here, both the NTM indices for imports i.e. coverage ratio and frequency ratio are significantly higher than exports. World’s average frequency ratio & coverage ratio for imports are 43.04% and 71.98% respectively, impacting US$ 7.14 trillion worth of the world’s imports.

Russia and Canada seem to be the strictest economies when it comes to implementation of NTMs. Russia’s coverage ratio for imports is 90.47% indicating a very high intensity of implementing non-tariff measures. This can also be inferred as only 9.53% of imports did not have any type of NTMs where numerator of the ratio became zero. Generally developed nations have higher coverage ratios than developing nations or LDCs because of their affordability and competitive level of technical knowhow. For India, NTM coverage ratio is 45.52% which is way less than the world’s average.

We need to understand that quantifying the exact cost of any particular NTMs is daunting because of heterogenous spread among the exporter community of each country. Consider for instance an exporter of Brazil who simply did not export one consignment to Japan because she/he could not afford the cost of laboratory tests, which in that case will not appear at all in calculations. Apart from this, one crucial point to note is that, each of the NTMs will have a different cost; but due to data limitations, literature is circumvented with given statistical approaches.

It is imperative for the policymakers to solve the challenge of implementing holistic approaches and constructing bridges between different disciplines as well as different sectors, including agriculture, environment, public health, tourism and commerce/trade.

For instance, Codex is a collection of internationally adopted food standards and related texts presented in a uniform manner. The general principles of the Codex Alimentarius specify the ways in which member countries may “accept” Codex standards. Uniformity and transparency in standards across sectors can go a long way in boosting free trade.

This gets even more relevant in the post-COVID era, wherein chaos and disruptions have led to a rise in trade costs and made market outreach tougher. Due to lockdowns and social distancing, processing of paperwork has also become harder leading to clogging of goods at ports. Easing of NTMs can go a long way in mitigating these trade costs and helping the world make a quicker recovery from the crisis.

Enquiry for Non-tariff measures: The arch nemesis of free trade