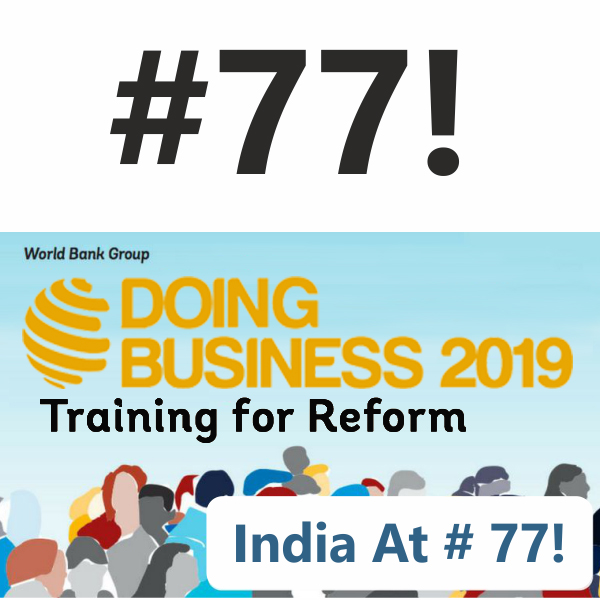 India is on course to becoming more business friendly with each passing year, courtesy a series of reforms that have enabled India to climb up the ladder on the World Bank’s Doing Business Index for the second successive year. As Mr. Suresh Prabhu, Union Minister for Commerce & Industry puts it, “India’s phenomenal rise in the Ease of Doing Business Rankings is the result of the focused teamwork between the Government, our various States and all Ministries under the Government,” adding further that “we shall now strive to do much more under able guidance of Hon’ble PM Mr. Narendra Modi.”

When the World Bank had issued the ranking for 2018 around this time last year, India had seen a remarkable jump of 30 positions to become the top 100th country in terms of ease of doing business ranking. The World Bank had then attributed the change in India ranking to the sustained business reforms it had undertaken ever since Modi government took charge in 2014. But what none might have thought of then was that India would jump another 23 places in the Ease of Doing Business Ranking when the same list will be released for 2019.

Upon the release of 2018 ranking last year, Junaid Ahmed the Country Director of World Bank had said while the time needed to register a new business in India had got reduced to 30 days from 127 days 15 years ago, the number of procedures were still cumbersome for local entrepreneurs who had to go through 12 procedures to start a business in Mumbai, which was significantly higher than in OECD high-income economies, where it took five procedures on average.

Junaid Ahmed had then said: “Tackling these challenging reforms will be key to India sustaining the momentum towards a higher ranking. To secure changes in the remaining areas will require not just new laws and online systems but deepening the ongoing investment in the capacity of states and their institutions to implement change and transform the framework of incentives and regulation facing the private sector. India’s focus on ‘Doing Business’ at the state level may well be the platform that sustains the country’s reform trajectory for the future.”

Taking cue from the suggestions, India continued on reform process to register a jump of 23 spots over the 2018 rankings, thus becoming one of the only two countries (out of 190) to figure in the top 10 improving nations for two successive years.

This is a remarkable performance considering the fact that India was steadily losing rank in previous years – from 131 in 2012 to 142 in 2014. In 2017, India had moved just one point, from 131st position among 190 countries to 130th position, which had led some experts to question the credibility of World Bank’s ranking process. While in 2014, all the BRICS countries were far ahead, India in 2019 listing stands well ahead of South Africa (82) and Brazil (109), and is fast closing the gap on China (46) and Russia (31). India is now the best ranked country in South Asia and is fast catching up with countries like Indonesia (73) and Vietnam (69).

A variety of reforms, including the introduction of the goods and service tax (GST) and the Insolvency and Bankruptcy Code (IBC) apart from reforms in the labour regulation are being seen as key attributes that led to rise in ranking. Consequently, India witnessed improved performance in areas like starting a business, access to credit, getting construction permits, getting electricity, paying taxes, and in trading across borders.

This speaks of India’s unhindered commitment to pursue a stronger reform agenda and to improve the business environment. It indicates India’s endeavour to further strengthen its position as a preferred place to do business globally.

Thanks heaps for this!… if anyone else has anything, it would be much appreciated. Add Your Link Free in Popular Webdirectory http://www.Directory.M106.COM Thx & Enjoy!