India’s Ministry of Commerce, through the Directorate General of Trade Remedies (DGTR), has recently enforced a safeguard duty (SGD) on solar cells and modules imported from China and Malaysia for the next two years. DGTR, created as an umbrella authority for trade matters under the Ministry of Commerce, has recommended a 25% SGD for the first year, followed by 20% on such imports for the first six months of the second year and 15% for the remaining half of the second year.

Safeguard duties are levied on the commodities by domestic governments/authorities to ensure that imports in excessive quantities do not cause injury to the domestic industry. Safeguard duties are temporary measures in defense of the domestic industry which is injured or has potential threat of injury due to sudden surge in imports. The investigation was undertaken after the complaint was filed by the Indian Solar Manufacturers Association (ISMA) on behalf of five Indian domestic manufacturers. In the complaint, the manufacturers alleged that despite the rapid expansion of the solar photovoltaic (PV) market in India, their margins have remained stagnant because the developers are importing equipment from cheaper manufacturing locations like China and Malaysia.

The question arises that till what point of time India will be depended on China and Malaysia for importing solar cells? It sounds quite feasible to produce these products indigenously rather than depending on it left, right and centre. This will also bolster rupee in the long run. What then stops India from doing so?

This article will be analyzing in brief India’s capacity to manufacture solar cells and solar panels domestically. It is important to understand the supply chain of solar PV module manufacturing, colloquially known as panel. It as follows:

There are three major reasons as to why China is ahead of India:

Silicon module super league (six largest Chinese manufacturers) were already having core competencies in semiconductors, before they moved in manufacturing of solar cells in early 21st century. It takes time for companies to learn and put in action new technologies. So, when the solar industry in China began to take shape, Chinese companies had already the know-how. To give a perspective, the learning curve lasts from medium-term to long-term that is from five to ten years. In comparison, Indian companies had no learning curve in semiconductors when the solar industry in India began to thrive from 2011.

Besides operational efficiency, another thing that is responsible for cost-effectiveness of Chinese modules is support from Government. The Chinese government is famous for its subsidizing programs concerning land acquisition, cheaper raw material, cheaper labor, export incentives, among others. In contrast, Indian policy support costs are higher than those of Chinese.

The cost of debt in India is highest in Asia-Pacific region. While cost of debt in China is about 5%, it is about 11% in India. Thus, debt is costlier in India, something that means higher interest expenses. Therefore, equity holders will have less cash flows and, thus, less equity IRR. This means that an investment in solar cell manufacturing facility in India will not be as attractive as in China. 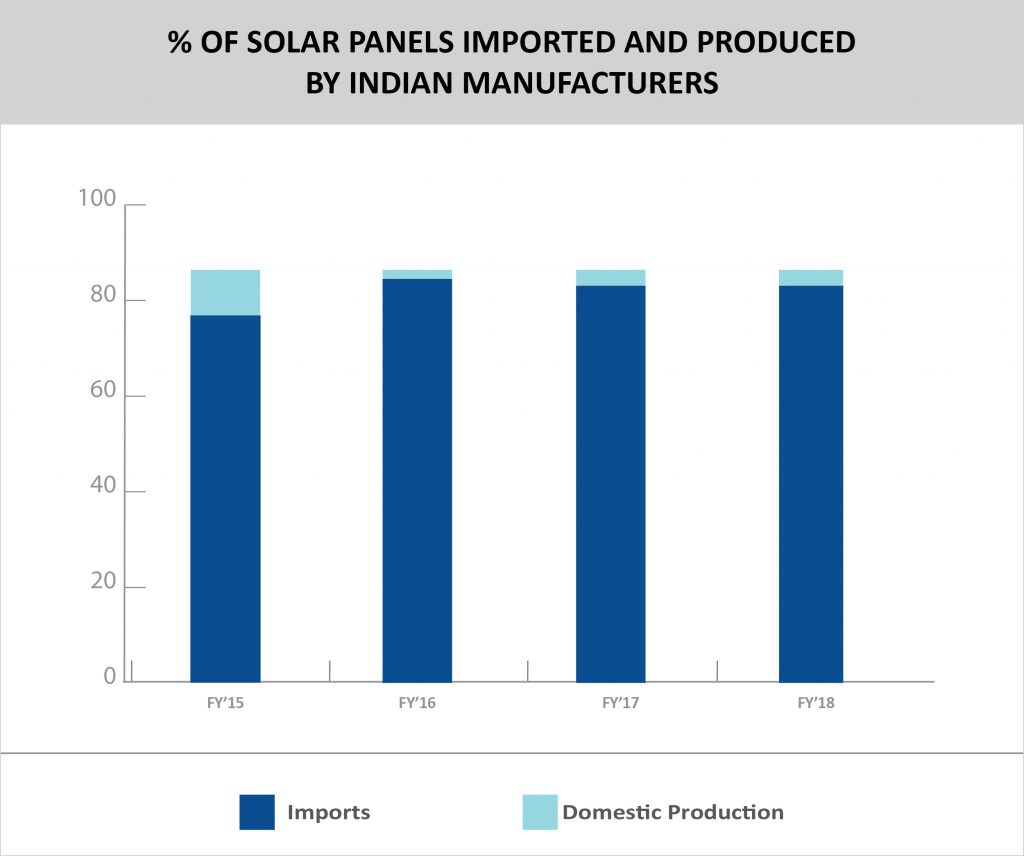 Why Only China and Malaysia?

Imports of solar products from other countries like Singapore and Taiwan will not attract SGD since they do not exceed 3% individually and 9% collectively of overall solar imports. The duty will not be imposed on the three solar cell and module manufacturers operating in the special economic zone (SEZ) area, namely, Adani Green Energy, Vikram Solar, and Websol Energy.

Here, long term policy will be more efficient since India needs to expand its capacity base so that domestic demand could be met. The local industry cannot cope with the recent surge in demand so Chinese imports looks inevitable. But we cannot procrastinate this story for long. Given the likely 10 GW-plus annual demand for modules across India going forward, there is scope for a number of new plants to be built to localize the supply chain in line with Make in India campaign.