• Popular ancient Indian economist Chanakya  repeatedly asserted that a strong economy is the foundation of a powerful and successful state. Indeed, he went on to say that it is from the “strength of the treasury” that an army derives its strength.
• Economies like Italy, Spain, USA, UK and France initially chose commercial activities and GDP of the nation over tackling Covid-19, even after WHO declared coronavirus as a pandemic.
• The World Health Organisation (WHO) said that India’s Covid-19 fight could make or break the global war. It said that India has a incredible capacity to deal with the pandemic as it has experience of eradicating smallpox and polio.
• In both addressing the calamity and managing international relations, India has seen reasonably better success as compared to even developed countries. This approach by India also finds resonance in Chanakya Neeti. 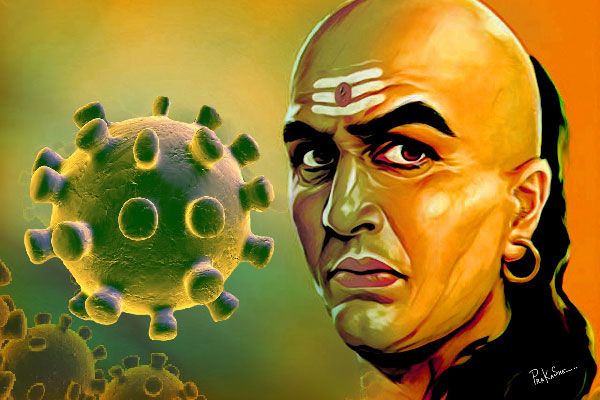 For a prime minister, there is probably no one better person to turn to for sane and sage advice on governance than Kautilya aka Chanakya, the popular ancient Indian teacher, philosopher, economist, jurist and royal advisor.. In Arthashastra, perhaps the greatest of the ancient texts on statecraft and political economy, Kautilya advises the king to be “ever active in the management of the economy, without which both current prosperity and future growth will be destroyed”.

A strong and vibrant economy, Kautilya repeatedly asserted, is the foundation of a powerful and successful state. Indeed, he went on to say that it is from the “strength of the treasury” that an army derives its strength.

Chanakya neeti has proved to be timeless in its application to economic and policy frameworks throughout history, and especially in times of severe adversity as we are witnessing today. The Covid-19 crisis is spreading its tentacles to more than 180 countries and has been declared a pandemic by WHO. Many developed countries are struggling to survive and have more or less given up, as they seem clueless on the most potent policy approach for fighting Covid-19.

So far, this pandemic has taken more than 95,000 human lives and another 2 million are at risk. The whole world’s macroeconomic and trade equation is imbalanced and most economic activities are at a halt. During this epidemic, we also have precedents of countries that have fought against Covid-19 to reasonable success. These economies include South Korea, Japan and India. What have these economies implemented in their domestic markets that the large developed economies couldn’t?

Five points which are mentioned in Chanakya Niti as policy suggestions, which ought to be implemented during a pandemic-like crisis are as follows:

1. Awareness and alertness among humans become imperative during any pandemic and people need to obey the instruction given by doctors.
2. Social gathering needs to be strictly prohibited to break the chain.
3. Need to honestly follow the instructions given by king/prime administrator
4. It is extremely indispensable to be ostracised from rumours because fake information might exacerbate the scenario.
5. Cleanliness should not be compromised especially during an epidemic.

Economies like Italy, Spain, USA, UK and France initially choose commercial activities and GDP of the nation over tackling Covid-19 even after the WHO declared coronavirus as a pandemic. An initial lockdown in these economies might have ameliorated their individual situations. Let’s compare the number of infected people across major countries as on 8th April 2020 to understand the relevance of Chanakya Niti. Due to the misdirected approach of above-mentioned economiesh, they are among the highest number of individuals infected, though China, Korea and Japan have experienced the initial impact of Covid-19.

India’s application of Chanakya Niti to Fight Against Covid-19

India’s relatively truncated numbers of Covid-19 cases are a result of a number of timely measures. The country adopted strong border control practices for screening passengers. Measures including initial closure of borders for air passengers from affected countries and barring visitors from selected countries would have helped control the spread of the pandemic. The World Health Organisation (WHO) has gone on to say that India’s covid fight could make or break the global war. Dr Michael J Ryan, Executive Director, WHO Health Emergencies Programme, acknowledged that India has a incredible capacity to deal with the Covid-19 pandemic as it has experience of eradicating smallpox (which killed more people on the planet than all wars) and polio through targeted public health interventions. He added:

“So, it’s really important that India continues to take aggressive action at the public health level and at the level of society to contain, control, suppress this disease and save lives.”

India has drawn up a battle plan to combat the coronavirus pandemic that involves focusing sharply on states, cities and districts that need immediate attention, heeding lessons from global hotspots like Italy that allowed the outbreak to spin out of control because of their halting and inconsistent response. The plan is to ensure that adequate arrangements are made for government and private hospitals, quarantine facilities, isolation beds, intensive care units (ICUs), ventilators and personal protective equipment to combat a surge in infections.

The government has also stepped up domestic manufacturing of personal protection equipment for the healthcare workers and medical devices, especially ventilators. Indian automobile manufacturers are also repurposing their manufacturing facilities to make ventilators. While prioritising health is equivalent to making the economy suffer, India has realised that the route to economic revival from this stage is incomplete till the pandemic is successfully controlled.

Diplomacy in a global war
In a situation like this, the role of global cooperation, irrespective of past differences,  cannot be undermined. Chanakya gave much importance to diplomacy and war, according to him was the ultimate option to attain a solution. Chanakya states that for a nation, power is the means to attain stability and peace. Peace is achieved through, careful manipulation of a nation’s power. Chanakya Neeti states:

In the spirit of this thought process, India agreed to accept the request of the superpower, USA of supplying anti-malarial drug hydroxychloroquine.

Paying attention to US President Donald Trump’s call for instance, India decided to allow export of hydroxychloroquine, which is viewed as key in the treatment of the covid-19 pandemic. It also allowed the export of paracetamol, a popular antipyretic, as well as some more drugs. So far, drug regulators across the world have been approving the use of hydroxychloroquine as prophylaxis based on anecdotal evidence, despite concerns of its adverse impact on cardiac patients. The treatment has been approved due to the health emergency caused by the novel virus, which has no known cure so far. Even if this may be debatable domestically, offering a helping hand to developed countries as a friend, where feasible, will escalate India’s position at global level following Chanakya Niti.

The post-Covid challenge of reviving the economy is even more dire, and countries will need to cooperate with each other to the extent possible.

India is the birth place of Lord Buddha’s philosophy, Mahatma Gandhi’s non-violence and the current prime minister’s spiritual attitude to many a problems!

Enquiry for Lessons from Chanakya Niti To Fight Covid-19