• India has expressed its dissent on the proposed e-commerce rules submitted by EU at the WTO in April 2019.
• From India’s perspective, the new rules will undermine the flexibilities available under the GATT and GATS.
• India’s position on data sovereignty and localization has been criticised by developed countries as being discriminatory. However, even domestic industry does not seem to approve of the proposals in the draft e-commerce policy.
• India should reconsider its position on these issues, as they could be detrimental to the growth of the nascent e-commerce sector.

A potential conflict is brewing in the WTO on the issue of formalisation of rules for digital trade. India has placed on record its strong opposition to the proposed e-commerce rules submitted by EU on April 29 at the forum. India’s permanent representative at the WTO Mr J S Deepak has cautioned that developing countries like India are not ready for binding rules in e-commerce.

While addressing the Informal Trade Negotiations Committee of the Heads of Delegates, Mr Deepak said, “We fear the impact of some of the e-commerce rules being proposed under the Joint Initiative on e-commerce, on existing trade rules, particularly the General Agreement on Tariffs and Trade (GATT) tariffs, which protect our industry, and General Agreement on Trade in Services (GATS) schedules that provide us useful flexibilities. Both the GATT and GATS could wither away due to the onslaught of the so-called ‘high standard’ e-commerce elements.”

Led by major economies like EU, US, Japan and China, seventy-six member countries of the WTO have commenced separate negotiations to decide on rules and obligations in e-commerce. On the other hand, India prefers to follow the ongoing multilateral programme on e-commerce at the WTO and get it finalized.

Some of the core proposals of the draft e-commerce rules tabled by the EU are as follows:

India is particularly opposed to two elements under the EU proposal – banning of customs duty on electronic transmissions and data localisation. India’s draft e-commerce policy clearly unequivocally identifies data as a sovereign asset, which cannot be allowed to cross the borders of the country. While China is part of the informal group, it has also put a precondition of data security.

On the moratorium for customs duties, India is apprehensive of the potential loss of revenue, especially for developing countries. Mr Deepak stated that India would also like to estimate the amount of revenue loss that could result from new technologies like additive manufacturing and the manufacturing of many dutiable goods through digital printing.

Opposition within and beyond borders

The office of the US Trade Representative (USTR) has disparaged India’s draft e-commerce policy as restrictive, since it raises costs for suppliers of data-intensive services who have to construct redundant data centres in India. It has urged India to reconsider the ‘discriminatory aspects’ like “broad-based data localisation requirements and restrictions on cross-border data flows, expanded grounds for forced transfer of intellectual property and proprietary source code and preferential treatment for domestic digital products”. This is also a major issue in onging trade negotiations between the US and India. 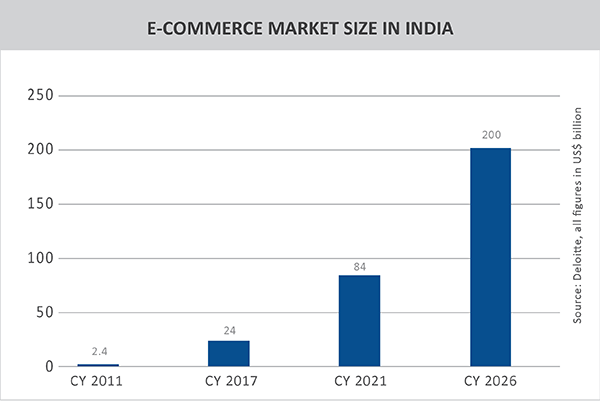 The policy has been criticized even within India. The Internet & Mobile Association of India (IAMAI) feels that the draft policy could be inimical to India’s plans to build a trillion dollar digital economy by 2022. It states that cross-border curbs on data flow, broadening the definition of e-commerce to all digital services and enforcing data localization could serve to cut down on FDI inflows into the sector.

NASSCOM has commented that by covering a wide range of entities including e-commerce platforms, IoT, search engines, ISPs, etc the Department for Promotion of Industry and Internal Trade (DPIIT) has put up conflicting views in areas that are core to other ministries. It feels that this is avoidable, and DPIIT should keep the focus on e-commerce only.

Furthermore, the industry body feels that storage of data within India should not be mandatory. Instead, firms should naturally opt to consider India for their data centre operations with improved efficacy of domestic infrastructure and business efficiencies. Also, NASSCOM has opined that the policy does not clearly specify the link between level playing field, access to data and innovation.

Perhaps the most critical concern for India is its mixed history with multinational e-commerce firms, which essentially implies Amazon and Flipkart (now under Walmart). The government issued revised guidelines for e-commerce in India in February 2019 to provide a level playing field for domestic firms.

These rules affect Amazon and Flipkart in particular, who together own around 90% of the Indian e-commerce market at present, according to estimates. This also implies that only large entrants with deep pockets like Reliance can effectively compete with these companies. So restrictive policies may only benefit larger Indian players rather than SMEs.

The e-commerce industry has come a long way since Sachin and Binny Bansal conceptualized Flipkart in 2007, but it has barely scratched the surface. By 2023, just around 32% of Indian customers will be online shoppers. At this juncture, the government would do well to reconsider the proposals laid out in its draft e-commerce policy, particularly by understanding its potential impact on the growth of e-commerce industry and the ultimate benefit to consumers.

Enquiry for Is India’s e-commerce policy on the right track?