India needs to enhance its competitiveness in intermediate goods exports through the implementation of reforms in taxation, enhancing ease of trade and investments in skilling of the workforce. 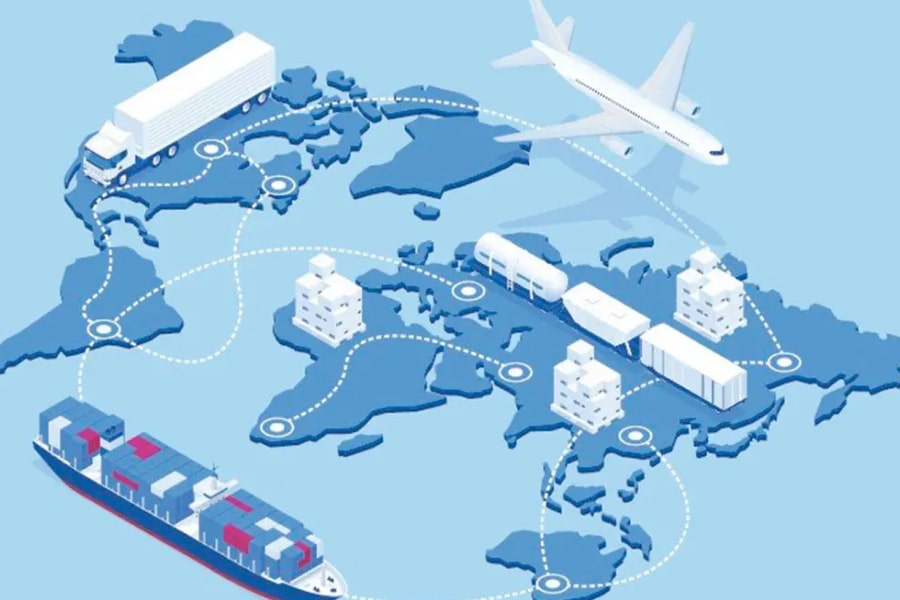 On the basis of tariff escalation, WITS classifies the trade of goods into different stages of processing which are raw materials, intermediate goods, consumer goods, or capital goods. The raw materials and intermediate goods are used as inputs for further production. Consumer goods and capital goods are generally considered as finished goods as they are ready to provide their utility.

As per United Nation Statistical Commission, the Broad Economic Categories (BEC) codes, which come under the class of intermediate goods are as follows:

322- Fuels and lubricants, processed (other than motor spirit);

42- Parts and accessories of capital goods (except transport equipment);

53- Parts and accessories of transport equipment.

In particular, to estimate trade of intermediate goods category wise, HS code wise data has been used after the conversion of HS 2017 into BEC 4. 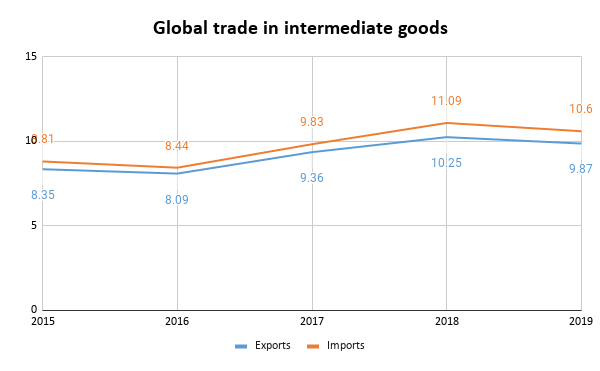 Going by the BEC classification, during 2019, India’s exports of intermediates amounted to US$ 152.86 billion. This has been an increase in comparison to exports in 2015, which were US$ 121 billion. Figure 1 shows the exports of intermediate goods classified using BEC classification. It shows that India mostly exports industry supplies, particularly diamonds, aluminum, P-Xylene, and flat-rolled products of iron or steel. 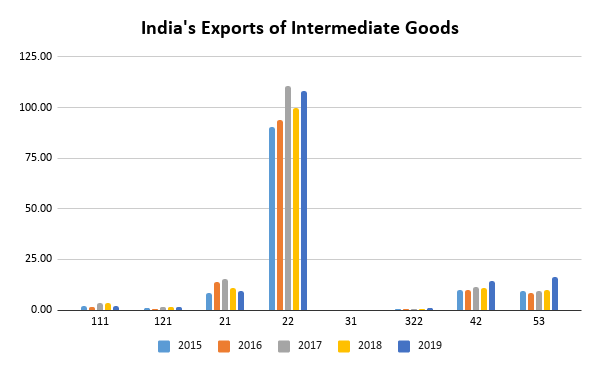 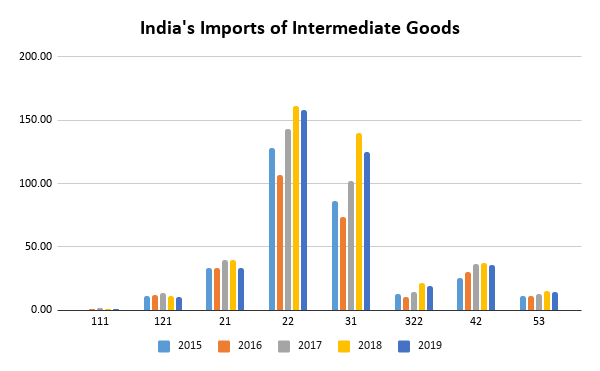 Trade of intermediate goods reflects a country’s participation in global value chains. Exports of intermediate inputs, mainly in the machinery industry, show the extent of a country’s integration in GVCs, since it shows the link of a country in different production chains spread across the world. Imports of intermediate inputs reflect the extent of foreign value added in the exports of a country, which again are used as an indicator for participation in GVCs. Integration of countries in GVCs has been proven beneficial as it provides firms with access to cheap inputs, which assist them in becoming competitive.

Furthermore, it assists in developing productive capacity and infrastructure, reducing poverty and increasing per capita income. China is a well known example, which has large factories employing thousands of workers and supplying goods to most parts of the world. It became a significant part of GVCs by importing intermediate inputs and then exporting assembled final goods to the rest of the world, mainly developing countries.

Over the past years, India’s participation in the global value chain has seen an improvement. As per the OECD TiVA GVC participation index 2018, India ranks 48. In 1999, the country stood at 57th position. A study from Institute of South Asian Studies shows that India has moved downstream in GVC in export of services, footwear, textiles and textile products, as these exports do not require foreign value added inputs. Furthermore, it shows that it has increased its upstream participation in manufacturing activities like semi processed intermediates which are then used for production purposes in other countries. 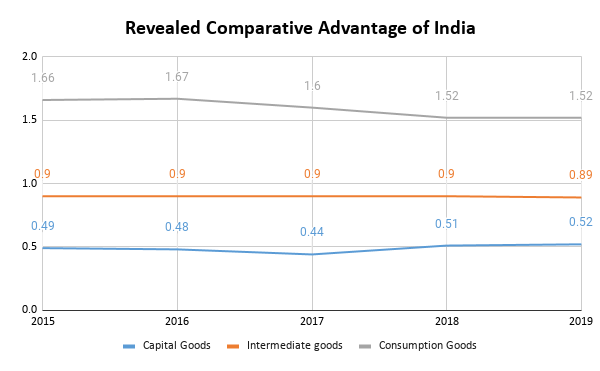 In order to move the country’s contribution upstream stages of GVC for manufacturing and to make India competitive in export of intermediate goods, it is essential to improve infrastructure of the country to allow easier movement of goods. Furthermore, it is required to maintain quality standards to contribute to the global value chain. Recently, initiatives such as Make in India, de-licensing, and industrial corridors have been adopted which are moves in the right direction. The policies of the 1980s and 90s such as license raj, state-led industrialization, and import substitution were more focused on the domestic economy than participation in international trade.

Still, there are other factors such as significantly high taxes and difficulty in custom clearance, which are a push back for the big companies and slowing the pace of India in becoming a part of GVCs. To maximise benefits from participating in GVC, it is also essential to enhance skilling of the labour force, as it allows them to contribute to high-value-added segments. In addition, as an ICRIER study points out, India needs to identify and target large scale intermediate manufacturing of at least 15 intermediate inputs. SMEs should be identified and supported to enhance their capacities and cost competitiveness in these categories, while also providing them the wherewithal to participate in global trade.

Enquiry for Intermediate goods trade: A reflection of GVC participation