India’s present economic engagement with Mexico has shown impressive improvements, transcending the barriers of distance. It is now time to enter a new era of partnership that hinges on deeper economic ties and mutual cooperation. 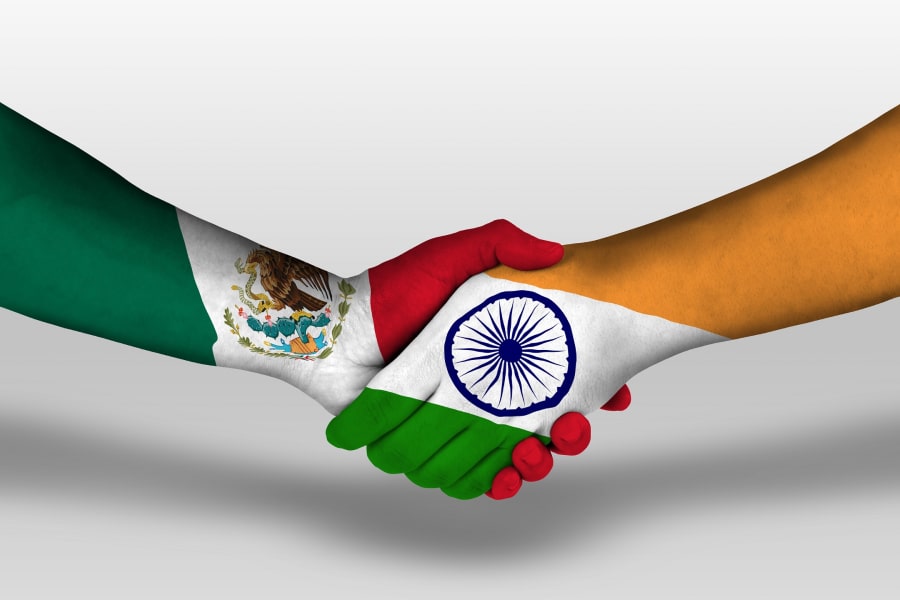 The recent years mark a renewed interest shown by India towards its immediate and eastern neighbours. However, there are significant opportunities in relatively distant markets that have become too stark to ignore. One such country brimming with exciting possibilities for India is Mexico.

Located in North America, Mexico is the fifteenth largest economy in the world and the second largest economy in Latin America. Mexico not only serves as a gateway to the US and Canada, but is in itself a big attractive market. Besides, the nation shares a number of similarities with India. Both India and Mexico are open, services-led economies having huge reserves of untapped resources.

Despite Mexico being located far away, India’s economic engagement with Mexico is much deeper than that with its closest neighbours. It is, therefore, of great interest to assess the current bilateral economic relations between India and Mexico and look for opportunities that provide mutual gains.

Trade in Goods- Current and Potential

Over the last decade, the bilateral trade in goods between India and Mexico has witnessed phenomenal growth. Compared to the modest US$ 1.5 billion of bilateral trade in 2009, trade between the two nations stood at US$ 8.9 billion in 2019 (Figure 1). Of the total trade, India’s exports to Mexico were valued at US$ 3.7 billion and India’s imports from Mexico equalled US$ 4.9 billion. The resulting trade deficit of US$ 1.1 billion was considerably lower than the US$ 2.4 billion deficit that India had with Mexico in the previous year i.e.2018.

Figure 1: India’s Trade with Mexico (in US$ billion) 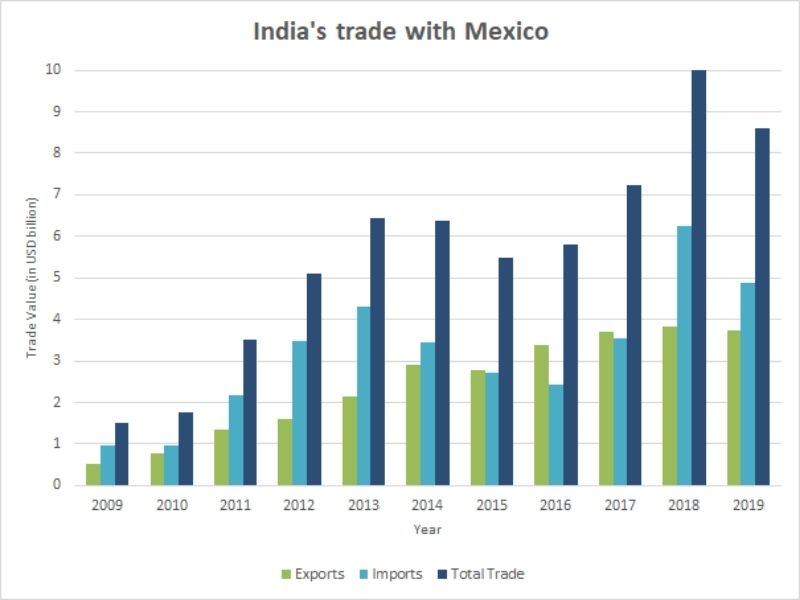 Coming to trade composition, it is interesting to note that both India’s export and import basket with Mexico are highly concentrated in a few sectors. India’s exports to Mexico mainly comprise of automobiles, organic chemicals, electrical machinery, nuclear reactors and articles of aluminum, iron and steel (Table 1).  Automobiles alone comprise a big chunk in the export basket, with India being the second largest exporter of automobiles to Mexico, after the US.

Mexico offers significant potential beyond its own market for India, as H. E. Federico Salas Lotfe, Hon’ble Ambassador of Mexico to India affirmed in an interaction with IBT:

In the regional context, we are the second largest economy in Latin America after Brazil, and the first trade partner of India in Latin America. Very closely linked to that is the fact that we’re in the North American Free Trade Market, which has been, until now, the largest trading block in the world (before the signing of the RCEP). Moreover, Mexico has 12 free trade agreements that encompass 46 countries.

India’s import basket from Mexico is even more concentrated with crude oil alone comprising a share of 77% in total imports. The other critical import categories are electrical machinery, nuclear reactors and machinery, vehicles parts and gold and silver (Table 2).

Since trade between India and Mexico is limited to a few sectors, an exercise was carried out to explore the possibilities of boosting and diversifying merchandise trade using the trade possibility approach. Untapped trade potential for a commodity is given by min (SE, MI)- ET where SE, MI and ET are supplier’s global exports, receiver’s global imports and existing trade between the supplier and the receiver, respectively. Further, only those items were considered where the supplier’s Revealed Comparative Advantage is greater than one (an indicator of global competitiveness). It was ascertained that total bilateral trade amounting to US$ 133 billion is possible if the two countries were to import from each other what they are importing from the rest of the world.

India has the potential to export an additional US$ 69 billion worth of goods in which it has a comparative advantage. The sectors having the highest potential are refined petroleum products, automobiles, medicaments and electrical and mechanical machinery and parts. Interestingly, Mexico also has a similar additional export potential of US$ 65 billion to India with opportunities present to export more crude oil, mechanical and electrical machinery and parts, automobiles parts, silver and copper.

It is inferred from the exercise that additional trade potential exists in the few sectors in which the two nations already have high intra-industry trade. Therefore, instead of diversifying, it would be more beneficial for India and Mexico to deepen value chains in these identified sectors. The trade complementarity index of 55% also indicates the immense scope present for enhancing trade.

There are a plethora of Indian firms operating in Mexico in a range of sectors, with the most prominent ones being Information Technology (IT), pharmaceuticals, automotive, steel and mining. The total investment is estimated to be worth around US$ 3 billion. In contrast, Mexico’s investments in India are much less with only around seventeen companies having a presence in India. Their investments are directed to food and beverages, automobiles, audio-visuals and IT sectors.

Towards a Strategic Partnership

During PM Narendra Modi’s visit to Mexico in 2016, the two nations decided to chart a roadmap for a “Strategic Partnership”. A few of the gaps that should be filled by the partnership are-

Last year, India and Mexico celebrated seventy years of diplomatic ties. It is now time to enter a new era of partnership that hinges on deeper economic ties and mutual cooperation.

Excellent ! I’m from Mexico and I really appreciate how my country has improved its relationship with India. 🇲🇽🤝🇮🇳