India’s trade of goods over the past fiscal year has experienced a lot of fluctuations owing to factors like supply chain disruptions at a massive scale, cancellation of orders and overall fall in consumer demand. In the coming months, the uncertainty persists as disturbances caused by the second wave of COVID-19 loom over of the economy. 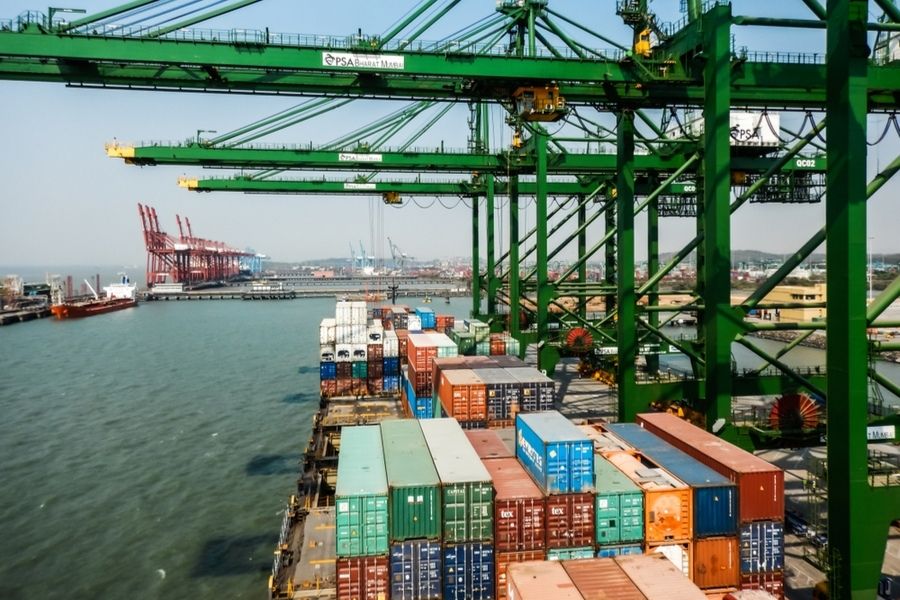 Fiscal year 2020-21 has brought a lot of ups and downs in global trade. With the pandemic-led shutdowns and trade bans affecting the supply side, demand worldwide has also been negatively affected by restrictions on movement and halt in GVC (Global Value Chain) operations. A report by UNCTAD showed that world trade experienced a 6% contraction in Q1 2020, 21% in Q2 2020 and 5% in Q3 2020, respectively.

However, the downturn in trade has also been due to the US-China trade war, which affected trade in Q1 2020 significantly. Q4, though, has shown green shoots of hope driven by a recovery in trade, mainly led by improvement in trade of goods, while services still remained stagnant. Quarter-over-quarter growth in trade of goods across the globe stood at 6% in Q4 2020.

India’s exports of goods saw the biggest surge of 60% year-over-year (yoy) during March 2021. This has been in contrast to the steepest fall in exports of goods during the same month in 2020, as demand declined due to the pandemic. Figure 1 below shows the trend in exports from April 2020 till March 2021. March 2020 and April 2020 were clearly the toughest months for merchandise exports with drops of 34.57% yoy and 60.28% yoy respectively. This can be attributed to the pan-Indian lockdown which took a toll on manufacturers in India and restrictions on air travel.

After that, exports started picking up once the restrictions were eased, albeit, with a bumpy path. Main factors responsible for the downturn in the exports have been supply chain disruptions on a massive scale and cancellation of orders due to drop in demand, owing to the coronavirus pandemic. 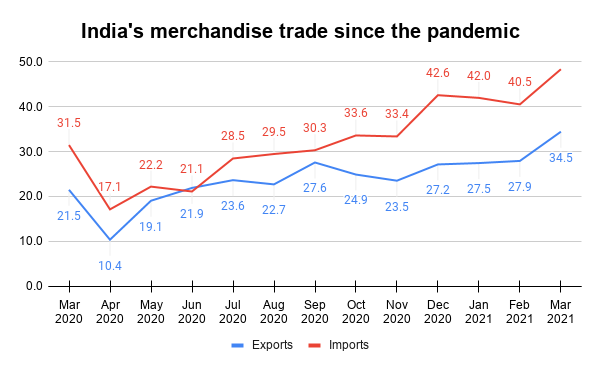 Source: Ministry of Commerce & Industry, figures in US$ billion

The imports of goods have also shown a similar trend with a significant downfall prior to May 2020 and sluggish recovery thereafter. Imports of merchandise goods grew by 53.74% yoy in March’2021, while the overall decline for April-March 2020-21 stood at 18.02%. During the fiscal year 2020-21, oil imports declined by 36.9% yoy, owing to factors like fall in the oil prices and lack of mobility. Furthermore, non-oil and non-gold imports contracted by 13.83% yoy, the decline reflecting fall in consumer demand.

The sharp expansion in merchandise exports and imports in March reflects a combination of factors such as a muted base, rising commodity prices reflecting post-vaccine optimism, as well as a surge in volumes at the end of the year.

Despite the decline in overall merchandise trade, F&B products have remained outperformers, with their performance even better in the second half of the FY 2020-21. As is shown in the figure below, both exports and imports have experienced higher yoy growth during October-February 2021. The value of F&B exports during FY 2019-20 stood at US$ 28.9 billion while for fiscal year 2020-21 (April-Feb), F&B exports amounted to US$ 32.2 billion. Similarly, in case of F&B imports, the imported value during FY 2020-21 stood at US$ 27.7 billion, which has risen to US$ 30.23 billion for FY 2020-21 (April-Feb). 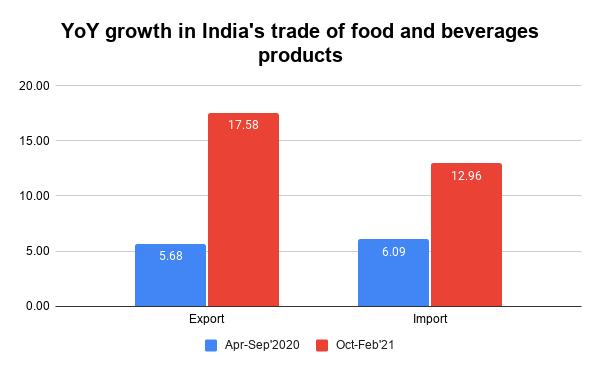 Wheat shipments increased by 672% yoy during April-Feb’2020-21, with the export value equal US$ 437.7 million. Exports of non-basmati rice stood at US$ 4 billion, growing by 132% yoy owing to huge demand from other countries including African nations. Some of the other F&B products which have significant increase in demand in the latter half of FY 2020-21 are presented in the table below.

The trade in goods has evidently performed better with the second half bringing exponential growth. However, the uncertainty about future trade has returned due to the second covid wave affecting the recovering Indian economy and the possibility of dampening consumer confidence and market sentiments. Aditi Nayar comments, “Given the surge in Covid-19 cases, we expect demand to shift from Q1 ’22 to the later part of the year, which may temporarily dampen imports. We expect India to record a current account deficit of US$ 22-27 billion in FY22.” With tightening of restrictions again in many parts of the country, the future trend in trade will depend heavily on the manner in which the pandemic is controlled and consumer confidence is reinstated.

India set to be the “rule maker” with G20 presidency
India to take over the presidency of the intergovernmen...