India’s G20 Presidency: Resurgence of the voice of developing economies

With its upcoming G20 presidency, India has an opportunity to highlight the upcoming challenges pertaining to trade and investment and strengthen the WTO to usher in a fair multilateral trading system. 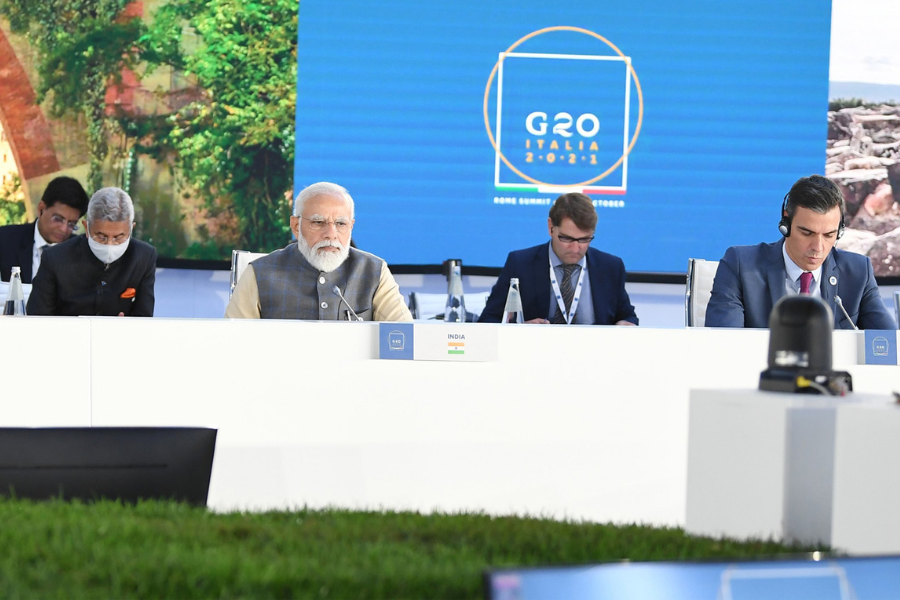 The G20 has been a platform to play a strategic role at the multilateral level to connect major developed and developing economies. Together, the G20 economies represent 75% of global trade, 80% of global GDP, and 60% of the world’s population. The group was formed as an offshoot of the global financial crisis that led to the collapse of the Leeman Brothers in 2008-09. The main objective of the group has been policy coordination towards achieving global financial stability and guarding against other major crises in the future.

In the year 2008, the G20 leaders held their first official summit to address the impact of the 2008-09 global financial crisis. Since its inception, through various annual summits and regular meetings at the finance minister’s level, the G20 has aimed at collaborated efforts to secure future economic growth and prosperity of the world economy.  However, the efficacy of the G20 is often questioned as it does not have a permanent secretariat.

The G20 has two workstreams– Sherpa and Finance tracks. The Sherpa track undertakes the discussions and suggests recommendations on the priorities and agendas of G20. The structure of the Sherpa track has 11 working groups, 1 initiative group, and 10 engagement groups. Under the finance track, the issues discussed are carried out by the Minister of Finance and the Governor of the Central Bank of each member country, focusing on economics & finance. For the final annual summit, together with Sherpas, G20 finance ministers and central bank governors conduct meetings several times a year.s

Each year the G20 presidency rotates among the member countries. In 2021, the Italian G20 Presidency under its trade agenda focused on the WTO reforms; investment facilitation, services trade, boosting MSMEs exports, GVCs & environmental sustainability. The G20 TIMM in Bali met on 22-23 September 2022 and highlighted that ‘more resilient, sustainable and inclusive growth can be achieved by ensuring that all people benefit from more sustainable trade and investment, including but not limited to industry, agriculture, services, and other sectors.

As per the joint report by WTO, OECD, and UNCTAD on G20 Trade and Investment Measures (Oct 2021- May 2022), since the outbreak of the pandemic, 156 trade and trade-related measures in the area of goods have been implemented by G20 economies. Of which 72 percent were trade-facilitating and 28 percent could be considered trade restrictive. However, the G20 economies continue the gradual lifting of export restrictions targeting products such as surgical masks, gloves, medicine, disinfectant, and food products. Therefore, in the post-pandemic transition, reorienting international cooperation is vital. So, the role of G20 as a premier forum for discussions and policy coordination of common interest is crucial.

Over the years, India has emerged as a leader directing and supporting multilateralism. It is gearing up to host the first-time presidency of G20 in the next one year and is actively engaged in preparations and “Soul of India” is proposed as the main theme.  For the first time, the G20 troika would be having developing countries- Indonesia, India, and Brazil. As the G20 has served as a forum for developing and developed countries to jointly participate in dialogues. India has the opportunity to ensure the developing world’s agenda is furthered as common agenda at G20. With uncertainty looming large in the global economic and political landscape, it becomes crucial to provide support to the concerns of developing economies.

In the G20, India has focused on agendas focusing on the liberalisation of trade, inclusive development, energy transitions, and other areas. During the initial G20 summits, India highlighted the issue of trade finance which was not prioritized in subsequent summits. India can now use the opportunity to re-discuss to seek support from other developing countries.With its upcoming presidency, India has an opportunity to highlight the upcoming challenges pertaining to trade and investment and devise an approach to handle them. Through the Trade and Investment Working Group (TIWG), India can identify and understand the key priorities to be focused on. Along with the support of developing economies, India can push G20 to strengthen the WTO for promoting a non-discriminatory, fair, open, inclusive, equitable, sustainable, and transparent multilateral trading system. Easing supply chains and avoiding protectionism remains major issue.

Another key priority is acknowledging the digital economy’s role, especially in the post-pandemic world. To gain from the advancement in digital technology there is a strong need for a collective policy. Currently, the Indian Government is also focussing on India as a trillion-dollar digital economy. Through digitization, the MSMEs sectors can be facilitated with the affordable infrastructure of operation and more benefits can be secured via the utilization of e-commerce platforms. Therefore, India should aim to promote advancement in digital space policies however ensuring that developing countries are not negatively affected by growing trade competitiveness in this area.

As developing economies are most endangered by climate change, it is of utmost importance to promote strong and effective green components in FTAs. Also, there is a heightened need to focus on synergies between climate and trade policies for greening global trade. The stress on promoting carbon pricing and mitigation is an undoubtedly imperative mechanism for developed countries. However, there is a need to adopt a balanced approach while recognizing the growth aspirations of developing economies.

Over time, the role of G20 has become more integral. India’s agenda should be guided by greater representation and collective voice of emerging economies. Given the pressing challenges of time, comprehensive and collective deliberations are the need of the hour to remarkably shape the global economy. Therefore, India must leverage its position and capitalize on the opportunity to emerge as the leader especially of developing nations, to carry forward key global issues.

All views expressed are personal.

Enquiry for India’s G20 Presidency: Resurgence of the voice of developing economies