• India’s exports are projected to reach an all-time high of US$ 325-330 billion in 2018-19.
• During April-January 2018-19, electronic goods, petroleum products and plastic & linoleum have shown the highest growth.
• India’s export performance is significant in light of the challenges presented by growing protectionism to global trade.
• The Department of Commerce is taking several measures to improve India’s trade balance, including diversifying India’s export basket.

During his address to global CEOs and trading partners at the eighth International Engineering Sourcing Show (IESS) Commerce Secretary Mr. Anup Wadhawan expressed confidence that India’s exports will reach a record high in 2018-19. Engineering exports are expected to be a major contributor to this growth. Mr. Wadhawan commented, “This year has been particularly good for us. We are likely to touch an all-time record and go past our earlier peak which was in 2013-14 at $314 billion and we hope to reach about $325-330 billion this year.”

He added that India’s engineering exports have managed to post robust growth in the past few years despite global challenges including unilateral protectionist measures by various countries. According to Mr. Ravi Sehgal, chairman, EEPC India, engineering exports in FY 2018-19 are expected to reach US$ 80-82 billion. 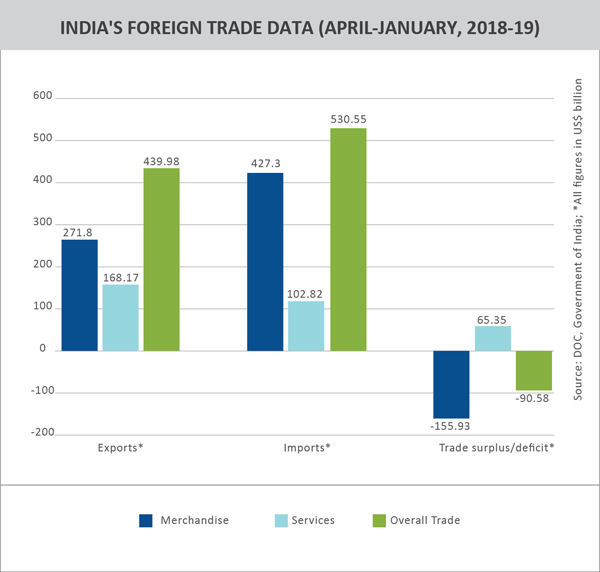 A major challenge could be looming for Indian exporters in the form of deteriorating trade relations with the US, which is India’s largest export market (one-sixth of exports by value). The Donald Trump administration has been critical of India’s trade policies, with the President himself accusing India of not assuring ‘equitable and reasonable access’ for US exports to its markets. In fact, Trump has also referred to India as the ‘tariff king’, often taking the example of high import duties on Harley Davidson motorcycles. In line with his larger objectives to rebalance US’ trade relations (starting with China), Trump is now attempting to reduce US trade deficit with India, which stood at US$ 27.3 billion in 2017. 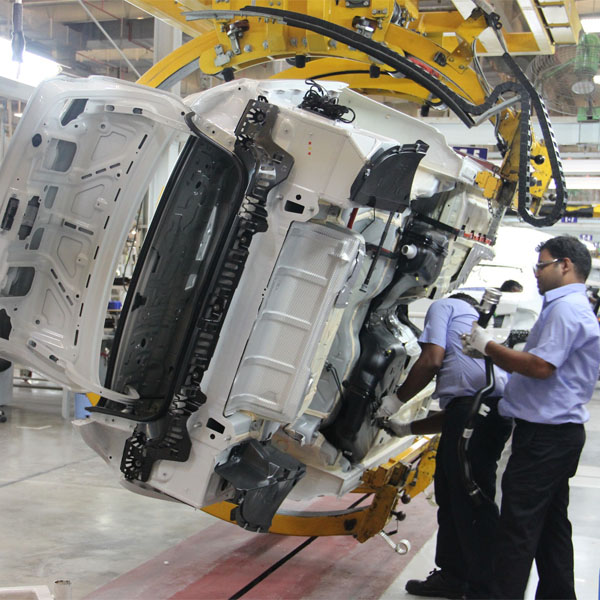 Other key concerns of the US vis-à-vis its trade relations with India include India’s ‘protectionist’ policies in agriculture, IP regime and tariff hikes on a number of manufactured products including mobile phones & auto parts. The revised e-commerce policy and data localisation laws are also expected to hurt US companies. On the other hand, India’s concerns largely centre on H1B visa restrictions by the US as well as the announced duty hikes on some steel and aluminium products in 2018.

Trump recently announced withdrawal of preferential trade status to India and Turkey under the Generalised System of Preferences (GSP). India’s exports to US under GSP stood at around US$ 5.6 billion with duty benefit at around US$ 190 million annually.

Although the impact of this decision is not substantial for India, prospects of an India-US trade war are brewing. India is exploring options to impose higher duties on US imports of walnuts, chickpeas, lentils, boric acid and diagnostic regents. This will add an estimated duty burden of US$ 290 million on these products. The retaliatory tariff measures were proposed in June 2018, after the US announced higher tariffs on steel and aluminium products. But they were deferred six times in anticipation of a bilateral trade dialogue.

While restrictive US trade policies dominate the headlines, trade protectionism is a rising threat across the globe, despite historical lessons on the benefits of open trade. The WTO’s World Trade Outlook Indicator’s latest reading on February 19 was 96.3, the weakest since March 2010 and indicating below-trend trade expansion for the first quarter. The WTO forecasts a slowdown in trade growth from 3.9% in 2018 to 3.7% in 2019, largely due to trade tensions and tight credit market conditions.

The Ministry of Commerce & Industry is working on an action plan to with the objective of making India a US$ 5 trillion economy by 2025. The Department of Commerce has targeted doubling of India’s exports by that year.

Among the major policy measures to boost exports, the Ministry has earmarked 12 champion sectors, to be given special attention to enhance their competitiveness, create more jobs and increase exports. These include:

The Ministry has also announced India’s first ever Agri-Export policy, which aims to enhance India’s exports to US$ 60 billion by 2022. Policy measures aim to integrate India’s agricultural products with global value chains and double its share in world agriculture, thereby boosting farmer incomes.

Other major policy measures by the government to boost exports include easing credit flow to the exports sector, enhancing ease of doing business, greater digitization and assistance for setting up and up-gradation of infrastructure projects with overwhelming export linkages through Trade Infrastructure for Export Scheme (TIES).

Notably, the Department of Commerce is also making efforts to diversify India’s export basket by products and countries. India has signed free trade agreements (FTAs) with a number of countries. Mr Wadhawan has urged exporters to make better use of these FTAs to enhance their market presence in these countries.

Hon’ble Commerce Minister Shri Suresh Prabhu commented last year that India should focus on smaller countries and new territories. He cited the example of Africa, which has 54 countries but only accounts for 8% of India’s exports. China is a key area of focus as well, considering its huge consumer market. This is significant in light of unilateral protectionist measures initiated by the US against India, making it necessary to reduce overdependence on the traditional markets.