The government is planning to make India a global Drone Hub by 2030 and expand its uses in various sectors like health, defence and infrastructure. Various steps like waivers for pilot permits, reduced and simplified procedures, creation of new drone corridors, and incentives for local manufacturers could radically catalyse the drone industry in India over the next few years. 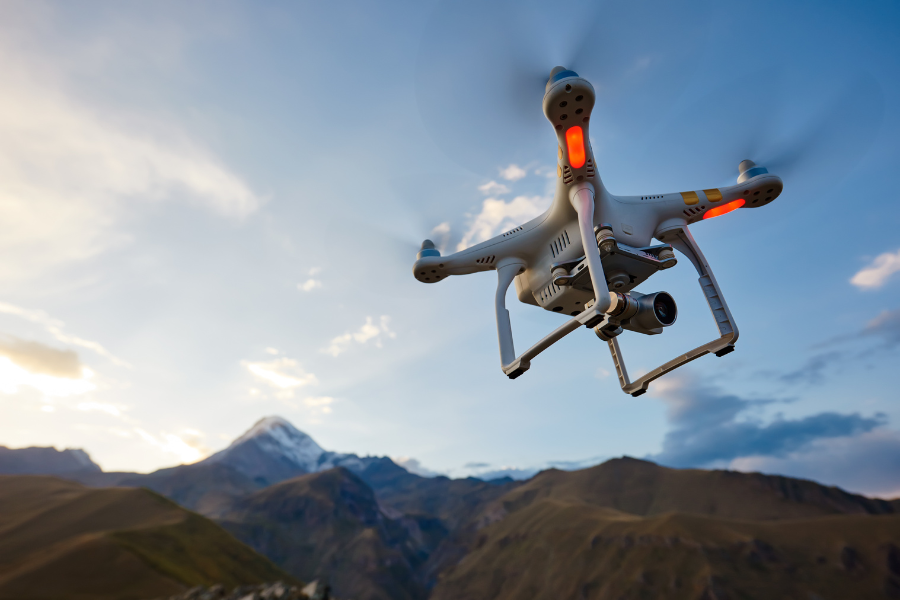 Unmanned Aerial Vehicles (UAVs), commonly referred as drones, are being used by several countries to tackle issues like disease control, vacuuming up ocean waste and even delivering pizza. The remote access and safety provided by drones is driving a steady growth in its usage across various sectors.

Even India, which is gradually developing its technological advancements in fields of EVs, digitization, artificial intelligence etc, is gradually discovering the usage of drones in various sectors. Initially used in defence, photography and recording videos, drones are now being engaged in food delivery, surveillance, geographical mapping, disaster management, search and rescue, and the list goes on.

Currently, India accounts for 22.5% of total global drone imports. Although most drones are employed for military activities, commercial drones are also getting popular. With a total value of over US$ 900 million, the commercial end-use drone sector is predicted to exceed the military industry. By 2025, India is forecasted to be the world’s third-largest drone market.

The Government of India is planning to make India a Global Drone Hub by 2030, and expects total turnover of the drone manufacturing industry to increase from ₹ 60-80 crore to ₹ 900 crore by FY 2024.

Technology and Types of Drones

As the name suggests, an Unmanned Aerial Vehicle/Drone can be simply termed as a flying robot which can be controlled remotely or autonomously with software controlled flight plans embedded in its system that works in conjunction with sensors and a global positioning system (GPS).

Depending on the usage and requirement, drones are manufactured in variety of types and sizes, these include:

As the government aims to make India a global drone hub by 2030, a total of 12 central ministries are involved in trying to boost indigenous demand for drone services. It is projected to create demand for around 1 lakh drone pilots in upcoming years.

Recently, Prime Minister Narendra Modi launched an event called “Drone Mahotsav” to promote the drone industry. During his speech, he highlighted the significance of drone technology in a variety of fields, including agriculture, tourism, disaster management, and the military.

To promote India’s emerging drone industry, the government has introduced below mentioned policies and schemes:

Application of Drone services in some key sectors 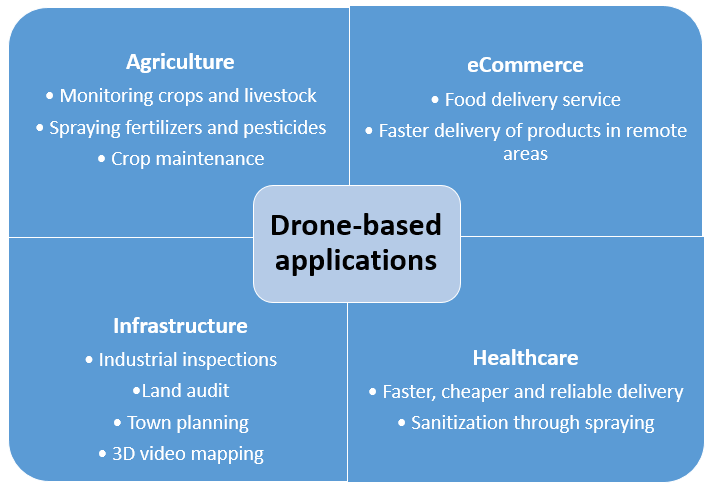 Drones were initially used as defence equipment in India, which has expanded over time. It now carries almost anything to everything including vaccinations and medical supplies, gadgets, food and groceries etc.

According to the Civil Aviation Ministry, as the market grows, the Indian drone industry is expected to reach US$ 1.5-1.9 billion by 2026. The growth in the sector is primarily credited to:

The drone service market in India was valued at US$ 130.4 million in 2020 which is expected to reach US$ 4,918.9 million by 2030 at CAGR of 44.4%. Drone service market segment, drone MRO services and drone training and education services are predicted to grow at a CAGR of 46.8% and 45.2% till 2030. With the growing drone service market, several companies and startups have started offering services across industries. Some examples are as follows:

The total manufacturing potential of drones and their components in India by 2030 is approximately US$ 23 billion according to an EY-FICCI report. Strong opportunities exist for the localization of components like batteries, airframes and motors.

In the past few years, private enterprise and government backing have led to a strong impetus for the drone industry in India. Various steps like waivers for pilot permits, reduced and simplified procedures, creation of new drone corridors, and incentives for local manufacturers are likely to allow drones to transform the scenario across numerous industries in the country.

Union Information and Broadcasting Minister Anurag Singh Thakur, in his address after flagging of the “Drone Yatra 2.0” in Chennai stated, “India will require at least 1 lakh pilots in 2023, which would create ₹ 6,000 crores a year worth of employment under the Drone sector”.

With a budding manufacturing industry and a surge in demand across various sectors, the drone industry is certainly expecting sunnier times ahead.

Enquiry for India’s drone industry: A flight to transformation