Even as a number of developing countries and LDCs grapple with food security issues, India is set for record foodgrain production in the 2020-21 crop year. IBT takes a look at the global trade scenario and how India’s agriculture sector is placed to play a critical role in global trade as well as food security 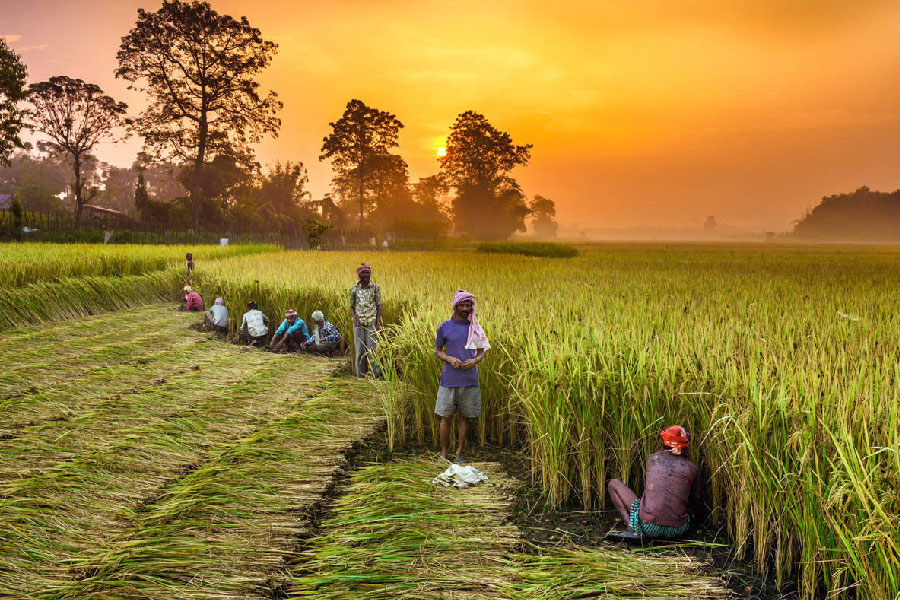 When COVID-19 struck economies across the globe, constraining a lot of us to our homes, it gave the term ‘comfort food’ a whole new meaning for many of us. While the more privileged were worried about missing out on their favourite restaurants; there were many, particularly in developing economies, worried about missing out on their next meal altogether. Panic buying, empty grocery shelves, migrants escaping cities and long queues outside food banks emerged as among the most disturbing sites across the world.

It is equally a test for global agri-supply chains and agri-trade. Even as a number of countries institute export bans on food items, India is one of those nations that have particularly bullish on their agriculture sector. In fact, India also commenced exports of agri commodities amidst the lockdown in April itself. The government has projected record foodgrain production for India in the current year, and agriculture is expected to be a major bright spot for India amidst the overall economic havoc unleashed by COVID-19. 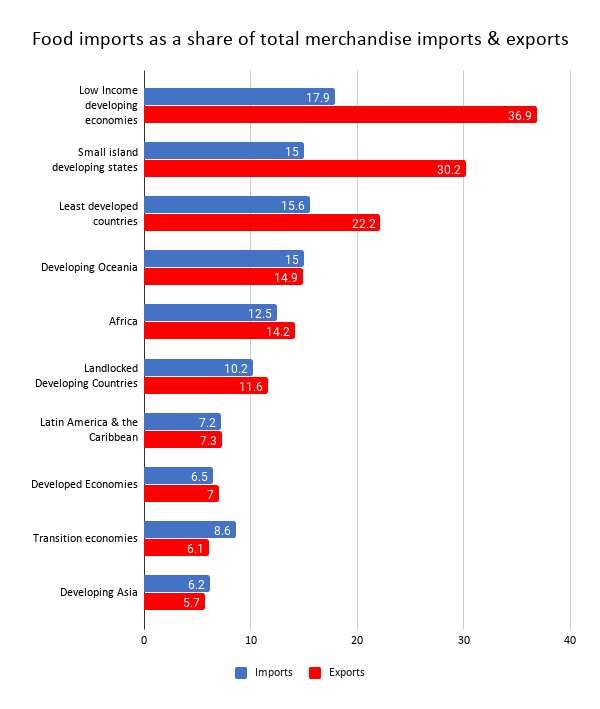 As the COVID-19 virus spread from China to all parts of the globe, the focus of analysts has also shifted from China-centric issues like global value chains, GDP impact and FDI, to larger systemic issues affecting global business and trade as well as economy and lives in general. Agricultural trade is quite central to discussions, considering its obvious linkages to food security. For a number of food insecure countries, unilateral export bans by food exporters and declining national revenues could have devastating consequences.

As the graph shows, developing countries, and particularly small island development states (SIDS), are witnessing a drastic drop in revenues given the precipitous collapse in their revenues due to the stoppage in international travel. As the graph shows, these countries are hugely dependent on food imports, making them vulnerable. Six countries – US, Russian Federation, India, Argentina, Australia and Ukraine account for over half of cereal exports. 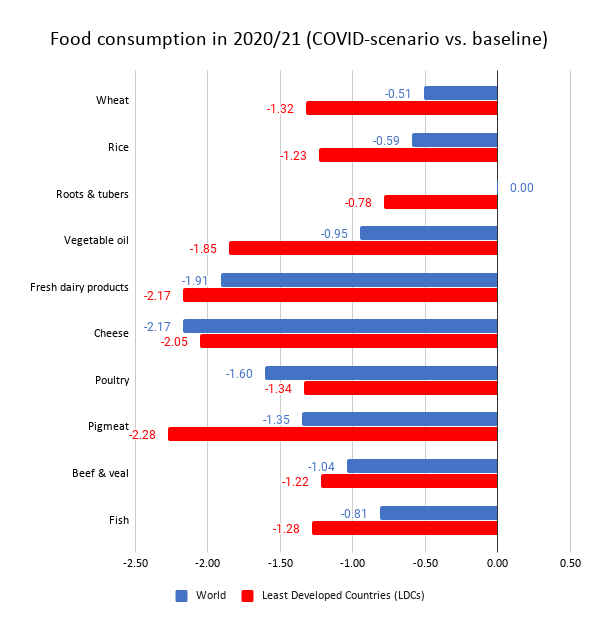 Expected decline in GDP will lead to a reduction in the growth in demand for agricultural commodities. In 2020, according to the OECD FAO Agricultural Outlook, prices in the COVID scenario fall below the 90% macro confidence interval and prices for higher value commodities (e.g. vegetable oil, poultry and butter) even fall lower than during 90% of all previously conceivable disasters (grey interval). This confirms fears of a historically significant market shock due to COVID-19.

In case economic recovery starts from 2021, prices can gradually return to the baseline scenario over the following years. Food demand is determined by two primary factors – economic growth and commodity prices. As the graph shows, consumption of staple food like roots and tubers, rice and wheat is less affected under the COVID scenario. On the other hand, the impact on the food consumption for vegetable oil and animal products is considerably higher. Moreover, the impact on LDCs is considerably higher than the world average. The report concludes that the projections for medium-term impact on average food consumption is not particularly strong, 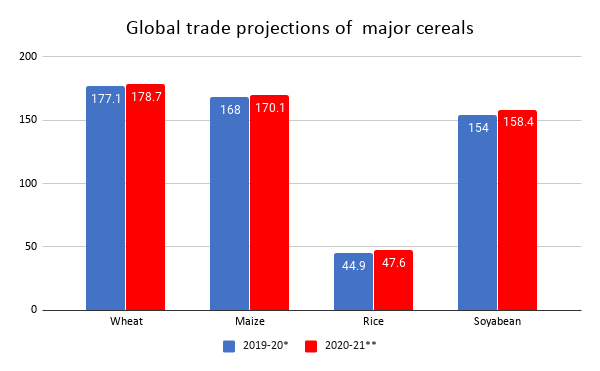 Wheat production in the global market is projected to trend upwards in 2020, mostly due to higher production by India and improving scenario in Australia and Russian Federation. These are helping overcome a downward revision for EU and UK. Trade is expected to grow marginally in 2020-21 YoY due to huge agriculture export surplus and competitive prices. In fact, stocks are expected to be higher in 2021 by 3.2% from opening levels due to improving production prospects. Maize production and trade is expected to also trend higher due to improving crop prospects in Brazil and EU, strong import demand as well as ample supply at low prices.

The same goes for rice production in 2020, where AMIS projections show improved crop prospects for Brazil, Bolivia and Uruguay. Greater exports by India and Thailand will provide much of the expected expansion YoY. Soyabean production is expected to witness marginal reduction, with a higher forecast for Brazil partially offset by downward projections for India and Ukraine. Trade for 2020-21 in soyabean is expected to increase slightly, with most of the demand led by China. 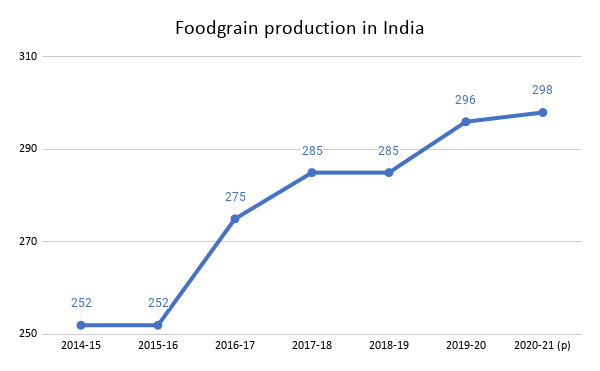 Thanks to the forecast of a normal monsoon at 102% of long-period average (LPA), agriculture is expected to cushion the shock of the COVID pandemic on the Indian economy in 2020-21. The Government has set the food grain production target at 298.3 million tonnes for the 2020-21 crop year, up by 1% from the record output in the present year. In the present year (July-June), India’s food grains production is estimated at a record 295.67 million tonnes as compared to the target of 291.1 million tonnes, growing by 3.7% YoY. The Finance Ministry’s monthly economic report for July projects that agriculture could make a positive addition to overall gross value added by 0.5-1 percentage points.

Agriculture relatively cushioned from the pandemic 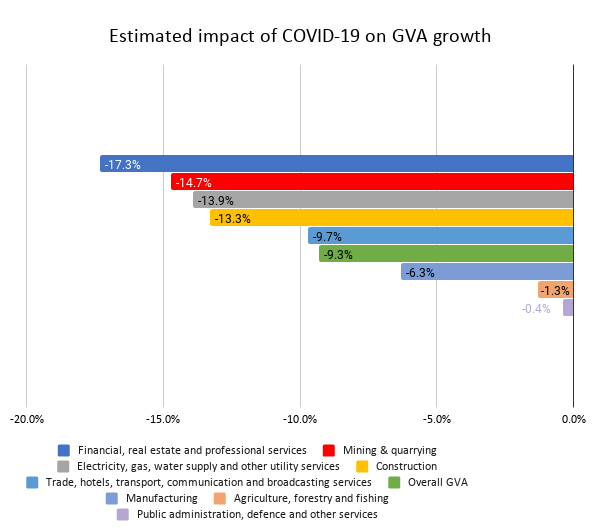 Lockdown measures imposed in India had a predictably devastating impact on key industries, with the economic loss estimated at around US$ 26 billion by Statista. Finance, real estate & professional services have been most affected with an estimated loss of 17.3%. This was followed by mining and quarrying (-14.7%) and electricity, gas, water supply and other utility services (-13.9%). However, agriculture, forestry and mining was relatively less impacted, declining by -1.3%.

One major reason for this is that the agriculture sector continued to see activity wrt crop harvesting, warehousing and distribution even during the lockdown. Overall, the risk of contraction in agriculture is lower, also considering the positive projections for foodgrain production.

Source: Department of Commerce; *figures in US$ million

Exports of key agri commodities have witnessed a sharp decline during April-June 2020. The only notable exception was rice, which grew by 10.07% YoY during the period; and spices exports, which grew marginally by 0.21% YoY. However, growth of 11 agricultural products, including coffee, rice, tobacco, spices, oil meals, oil seeds, fruits and vegetables, cereal preparations and other processed items, has been positive (18%) compared to 12.4% decline for overall merchandise exports.

The implementation of amendments in the Essential Commodities Act (ECA), approval of barrier free trade for foodproducts and contract farming arrangements with processors, aggregators, etc. are timely interventions for the sector. As a report by World Trade Centre emphasises, India can aspire to become the fifth largest agri-exporter post-COVID by surpassing Thailand and Indonesia, through focused interventions in capacity building. Besides this, focus on improving crop productivity, quality, market diversification, brand promotion and agri-processing are critical to boosting Indian agri-exports post-COVID-19. Besides this, Indian exporters must be more cognizant of tastes and preferences of native consumers in target countries to raise their market share in these destinations.

Enquiry for India’s agriculture trade: Prospects of a post-COVID renaissance