Mukesh Jagwani, CEO & Managing Director, WinMagic Toys Pvt Ltd, opines that to build India’s credibility as a quality manufacturing hub for toys would attract foreign investment into the sector & boost domestic production capability. This would encompass a gamut of reforms such as setting up of more SEZs, holistic reforms like relaxed labour laws that encourage the local manufacturers, decentralization of FDI approvals, superior infrastructure and connectivity and focus on technology & quality. 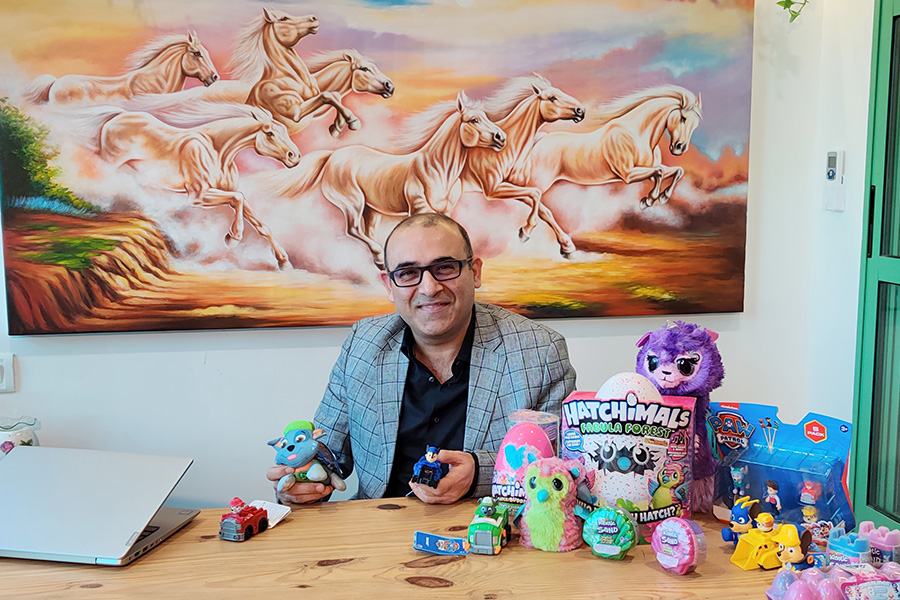 IBT: What is the current status of the toy industry in India? What are the different types of toys that dominate the domestic toy market?

Mukesh Jagwani: India’s toy market stands at US$ 1.7 billion, which is approximately 1.5% of the global toys market of around US$ 100 billion and is growing at a CAGR of about 14%. As compared to rest of the key toy markets in the world – USA (US$ 27 billion), Canada (US$ 2 billion), UK (US$ 7.6 billion), Germany (US$ 6 billion), France (US$ 3.8 billion), Italy (US$ 2.2 billion), Spain (US$ 2.1 billion), Russia (US$ 2.8 billion), China (US$ 13.4 billion), Japan (US$ 12.2 billion) and Australia (US$ 3.7 billion) – India is the smallest market in terms of size. However, it is growing at the fastest rate and with the largest population of kids. 35% of India’s population is under the age of 14 years. India therefore represents the highest head room for growth as compared to any of the other key and mature markets, and the global toy industry recognises India as a preferred market for their products. China is the other big growth market along with India.

The portfolio of toys in India can be looked at as comprising of three broad type of products:

These are mainly very high featured and inspirational toys across generic and licensed or entertainment categories for all age-groups and sub-categories of toys & games. The features include sound, light, artificial intelligence, augmented reality, and other electronic and robotic innovative features. These toys are the core brands of the global toy market, but only contribute to about 15%-20% to India’s market size, being imported and high price points, sold at a premium of at least 100% over Indian made simpler and cheaper toys.

These are the toys that have satisfied the needs of the aware Indian consumer who wants the very best in class and quality as well as toys & games based on their favourite characters or entertainment properties.

These brands are made mostly in China, few in Vietnam and fewer in other markets across the world. They are mainly associated with mature toy designing & brand owning markets like the US, UK, Europe and Australia to name a few. These toys are also the safest in the world and tested on the highest global quality standards.

These toy brands are owned by large and small MNCs and brought into India either by the companies themselves who have a presence in the country through a subsidiary or through authorised distributors and partners like WinMagic, who then work as brand custodians and representatives for such brands. Some of the multi-national companies who are directly present in India include: Mattel, Hasbro and Lego. Other big companies present in India through distributors include Spin Master, Moose Toys, Just Play, Jakks Pacific etc.

These are simpler and cheaper toys with very simple functionality. Almost all of these are non-electronic (without sound, light, or robotic features). They constitute around 15-20% of the market. All these toys are yet untested as there was no regulation in place for Indian made toys and may be unsafe for use.

This category constitutes around 60-70% of the market. These toys are imported mainly from China. They form the bulk of the unorganised wholesale toy market. In a recent survey by government, it may have been mostly the Indian made and cheap Chinese brands, which were found to be unsafe and did not comply to the standard quality parameters under which they were tested.

Many importers of such toys have been known to use unscrupulous means to bring them into India without declaring the full value of the toys. This is done to avoid duty and by falsely declaring such toys as safe or complying with global standards. These are the toys which are sometimes cheaper than the toys produced in the country and are cannibalising the Indian toy industry.

IBT: What are the major sources of import for Indian toys? How can India reduce its dependence on these countries? What should be done to create an enabling ecosystem for toy makers in the country to ramp up production?

Mukesh Jagwani: Annual imports of toys in India are estimated at around US$ 750 million, whereas China exports toys worth US$ 60 billion worldwide, out of which US$ 28 billion is to America alone. China mainly and to some extent Vietnam are the major source countries for import of toys coming into India. The best way to reduce dependence on China is to make a distinction between global best toy brands and the unbranded cheap imports and place tariff and non-tariff curbs on the latter.

Unfortunately, the Government of India’s move of placing curbs on all toy imports as a blanket policy have hit global best toy brands too and the very multinational companies whose products were inspiring Indians, without cannibalising the Indian made toys and who are also the potential collaboration partners for growth & development of Indian toy industry.

Promoting exports from India, world-wide is a big opportunity apart from domestic consumption. Therefore, steps must be taken to invite such global multinational players to manufacture toys with Indian entities and encourage & incentivize Indian firms to set up quality manufacturing facilities like in China.

This needs establishment of global trust in India as a quality manufacturing destination by embracing reforms in the manufacturing sector in India that enable FDI in this sector and support the local manufacturers.

Building India as a trustworthy destination for quality manufacturing can offer more and accelerated dividends rather than curbing imports of toys. Steps could include setting up of more SEZs, holistic reforms like relaxed labour laws that encourage the local manufacturers, decentralization of FDI approvals, superior infrastructure and connectivity and focus on technology & quality.

These steps will ensure an FDI-led growth of manufacturing and exports from India of these categories of products. To reiterate, the same global players who’s high-quality branded goods are being taxed with higher tariffs are the potential primary targets for bringing in FDI to boost the manufacturing sector in India, hence leaving such players out of imposition of curbs would be an absolute must for any such policy to be productive for India.

IBT: What are some of the key challenges that have prevented India from emerging as a world leader in terms of toy production? How can these be resolved?

Mukesh Jagwani: In some countries, toys are an essential item and high-quality toys are sold through essential items stores as well. In India, toys are considered non-essential and top quality premium brands are mainly sold through speciality channels and departmental retail chains. Thus, a key challenge is the culture where toys and children having fun is not considered as important and essential as children having education, low awareness about necessity of world-class and safe toys.

At the same time, we have an industry that instead of willing to learn from competition wants protection and continues to make cheap and basic toys. Another challenge is low incentivisation by government and non-availability of easy finance for the sector. Because of these challenges, there is currently a huge gap in level of infrastructure required to make fully functional and feature toys that are most in demand, and very low inclination to develop & design quality and innovative home-grown toy brands.

Mukesh Jagwani: The pitch by the government to foreign countries to look at India as a global hub for sourcing toys as well as the internal encouragement to set-up toy parks, is commendable and long awaited by the industry. The recent appeal by our honourable Prime Minister to entrepreneurs and industry to ‘team up for toys’ and get ‘vocal for local toys’ are steps in the right direction.

But a hike in import duty on toys by over 200% to take it from 20% to 60% this year and the rushed manner in which the new Quality Control Order is intended to be implemented has left the trade and industry in a sort of panic and with a lot of resentment. Even potential foreign collaborators and investors are miffed. Both the moves have disrupted the supply of best toy brands that are supplied into India by major global toy manufacturers and brand owners who are the potential investors into the industry in India for setting up or tying-up facilities for manufacturing their products in India for the world.

The new QCO was declared towards end of February and the nation went under a lock-down from March. The industry and market which were already reeling from the effects of COVID 19, have been put under further severe stress due to the approach in which the new QCO is being implemented.

Indian retailers, distributors and wholesalers who were dependent upon imported toys for over 80% of their supplies face the risk of closing down. Even if they afforded the prohibitive duties, it may take at least a period of 6 to 8 months or more to have the supplier factories certified under the new QCO. The Indian industry, as things stand today, can neither provide a replacement option for the high-quality international toys nor the volumes required in the short to mid-term. And it is these entities only, which are the very supply chain on which the Indian industry depends as well.

IBT: What lessons can Indian toy makers learn from the global best practices?

Mukesh Jagwani: Focusing on design, innovation and acquiring global licenses for popular entertainment properties are the most important lessons that Indian makers and brand owners can borrow from the global toy industry. On the manufacturing side, speed of execution, large scale of production and infrastructure to make highly detailed and feature-filled toys and the right pricing are some of the best practises that Indian factories can learn from China.

Mukesh Jagwani: We do not have the exact figures but the number of companies exporting toys from India can be counted on fingers. The volume is so low that just one of the multinational companies that manufactures a popular toy gun brand and exports internationally to some markets from India is as much as 50% of total exports form India.

That the Indian toy industry’s contribution is only 15-20% to the very low domestic consumption is another indication of the low levels of capacity and volumes being produced of the Indian industry currently.

Currently, Indian brand owners or manufacturers are exporting mainly to the US, Europe, UK, some of the SAARC countries and Australia, but in very limited volumes.

The situation can only change when Indian manufacturers increasingly collaborate with global brand owners from the best toy brands set for supplying to international markets. Indian entrepreneurs should also take on the mantle of developing home grown toy & entertainment concepts, which are innovative and reflect a world class design thinking. Furthermore, the regulatory environment must promote openness for inspiration and healthy competition rather than protectionism and incentivise the growth and scaling up of a high-quality and voluminous manufacturing eco-system.

Mukesh Jagwani is the CEO & Managing Director of WinMagic Toys Pvt Ltd, a multi-brand Kids Merchandise marketing & distribution company. He has over two decades of practice including leadership roles in setting up multinationals in India to leading start-ups to profitability and turnover goals.

Thank you for taking the time to write and post this material.