• The Indian pharma industry has made strong inroads into the US over the years, and is the leading supplier of generic drugs globally.
• However, the industry still hasn’t managed to penetrate the second largest economy significantly, as it accounts for just around 0.1% of China’s pharma imports.
• Pharma players are reluctant to spend their time and energy on China, due to the tough and long regulatory procedures in the market.
• However, with the US-China trade war and China’s mega procurement plan for drugs providing new opportunities, it is a good time for the Indian pharma industry to capitalize.

The Indian pharmaceutical industry is the largest supplier of cost effective generic medicines to the developed world with 35.2% share of exports destined to US followed by 3.8% to UK & South Africa. But while Indian pharma players have successfully grabbed opportunities with off-patent drugs in US, they have been unable to crack the code for the second largest economy – China. This would classify as a major opportunity missed, since China is one of the largest importers of pharmaceuticals with a share of 4.5% in world imports. But it sources its drugs mainly from US and EU, while India’s share in this pie is a meagre 0.1%. 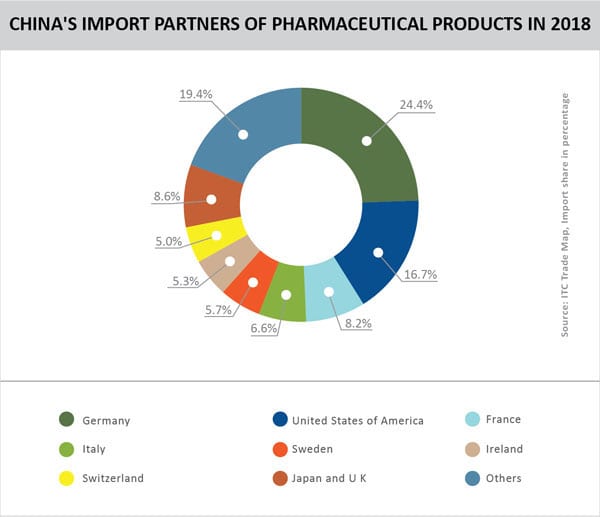 Source: Data of import value in US$ billion from ITC Trade Map

India’s exports of pharmaceutical products in 2018 were recorded at US$ 14.27 billion. On the other hand, China imported US$ 27.90 billion worth of pharmaceutical products during the period. India’s exports to China, however, stood at just US$ 38.99 million. It has been further observed that products exported by India are similar to the products imported by China, thereby indicating huge potential to raise that figure.

China also exports US$ 8.86 billion worth of pharmaceutical products and has emerged as the leading supplier of APIs by volume. Although China’s active pharmaceutical ingredients (API) manufacturers are major exporters, exports of finished pharmaceutical products (FPPs) are less significant so far. Currently, around 97% of drugs sold by local Chinese manufacturers are generic. About 80% of the drugs sold in the Chinese domestic market are generics, with foreign-owned companies supplying almost all of the innovator (i.e. patent protected) products.

Pharma is a highly lucrative avenue for India, helping it address concerns of high trade deficit with China, which for the past three years has been over the US$ 50 billion mark. In addition to this in May 2019, China announced that it has exempted imported tariffs for 28 drugs; hence pharmaceuticals exports could be a savior for India in bringing the trade deficit at lower levels. 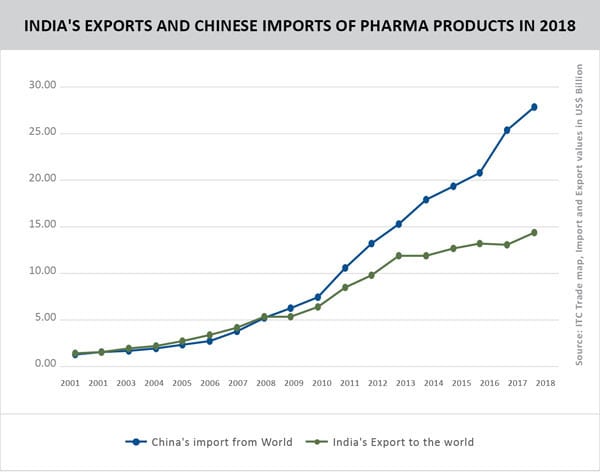 Source: Data of Import and Export Value in US$ billion from ITC Trade Map

The only major obstruction in entering the pharmaceutical market in China is its regulatory system. China strengthened its GMP regulations and has separate regulations for exipients, packaging and labelling. In addition there is a regulatory regime covering pharmaceutical distribution and conduct of clinical trials. Indian firms are subject to lengthy inspection process, requiring multiple official clearances for both oral and injectable drugs.

.But recently, China has agreed to accelerate the inspection and approval procedures of drugs, opening huge scope for the Indian pharmacy industry. In this respect, talks between the two governments are taking place to ease and enhance exports from India to China. In addition to this, another factor that plays an important role is that US is one of the main exporters to China and in present scenario of US-China tariff hikes, India has great opportunities to tap.

Indian pharma firms have been wary of investing too much of their energies in China due to lengthy approval processes. The Yunnan province, for instance, invited expressions of interest from Indian pharma firms earlier this year. However, there was no response from Indian companies by the time the deadline ended. China’s National Medical Products Administration (NMPA) takes 3-5 years on an average to register a product, a process that involves a cost of around US$ 58,000 per drug.

Sun Pharma Chairman Dilip Shanghvi, however, claims that China holds vast potential and the time is right to tap it. China has launched an extensive drug procurement programme across cities, which is leading to drops in prices and providing opportunities to the Indian pharma industry. Approval times are coming down fast, as China aims to bring new drugs to its patients as quickly as possible. Dr Reddys and Cipla are also expanding in the region.

Given this window of opportunity, it is an opportune time for the Indian pharma industry to capture the Chinese market to both diversify its market exposure and bring down its trade deficit.

Nice post. Thanks for sharing.
If anyone looking for pharma products simply visit – https://joinhubpharma.company.site/

Enquiry for Indian pharma: Time to treat the ‘dragon’ deficit