Indian mango: Set for a boost of ‘Vitamin T’?

India stands among the emerging suppliers of mangoes to the world, despite being its largest producer. But with recent developments, India may finally be in a position to significantly raise its share in global mango trade. 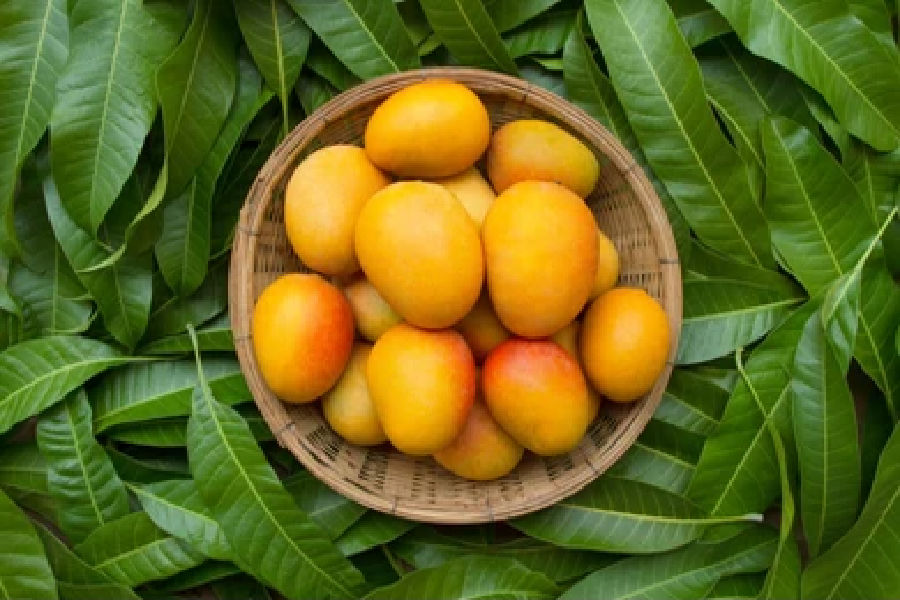 Mango (Mangifera indica) a delicious fruit, is a member of the cashew family (Anacardiaceae). It is one of the most widely cultivated fruits of the tropical world. This ‘king of fruits’ with a taste that reminds you of oranges, peaches and pineapples, has been deeply intertwined in both history and legends. The green mangoes are a rich source of Vitamin C, while ripe ones have an abundance of Vitamin A. It is considered a sacred fruit in India and the mango tree is believed to grant wishes. Besides this, mangoes have been a source of inspiration for the popular paisley design in Indian fabrics.

Mango originally belongs to Malaysia or the Indo-Burmese region, and over the centuries, its popularity has grown across the world. From these areas, its cultivation spread to other neighbouring countries & it became an intensive crop in South-East Asia around 4th or 5th Century BC. Interestingly, its spread is also linked to the spread of Buddhism from India to these countries.

The Arabs on the East Coast introduced the fruit to Africa. With Portuguese navigators, it travelled to Brazil, from where it spread across South America and then to North America. They were first grown in the US in the 1800s, while they travelled to Australia during the 19th century.

India is known as the largest producer of mangoes globally. Every year, ‘July 22’ is observed as the ‘National Mango Day’ to celebrate and honour this juicy delight. The major producing states in India are Andhra Pradesh, Uttar Pradesh, Karnataka, Bihar, Gujarat and Telangana. Uttar Pradesh occupied 1st rank in mango production with a share of 23.58 % and highest productivity in 2021-22.

Not only is India the largest producer, it is also the world’s largest consumer of mangoes. Per capita consumption is estimated to increase by 3% p.a. during 2021-2030 (expected to be 28.4 kg in 2030). Indonesia, China, Pakistan, Mexico, Brazil, Bangladesh, Nigeria, and the Philippines are the other major mango producing countries.

For a long period of time, trading in fresh mangoes was restricted to local or regional trade, due to its perishability. After the Second World War, it began to be traded over longer distances, with the development of air transport. Refrigerated sea transport in the 1980s-1990s further boosted trade. Today, the mango is a widely traded commodity around the world, but to what extent is India, its largest producer, participating in this trade? In this article, we attempt to answer this question through a holistic analysis of current global trade flows.

Mexico is the world’s leading exporter with a share of about 21%. Around 90% of Mexican mangoes are exported to the United States, while the rest are exported to Canada. The US also imports mangoes from Guatemala, Nicaragua and Costa Rica. Brazil and Peru export largely to the European Union, whereas only 20-30% of mangoes, exported from both the countries reach the US. In 2021, with total exports of 280,000 and 270,000 tonnes respectively, Brazil and Peru each held about 12% share in global exports of mango, mangosteen and guava.

Thailand is a leading exporter of mangosteens, while India and Pakistan are emerging suppliers. FAO data for exports showed that the mango shipments from Pakistan have increased by about 90% in 2021, to around 200,000 tonnes, responding to higher import demand from Central and East Asia.

Total global imports of fresh mangoes, mangosteens, and guavas amounted to 2.1 million tonnes in 2021, registering an increase of around 5% from 2020. The US and the European Union (EU-27) were the two leading importers, with an import share of 26% and 19% respectively.

Within Southeast Asia (intraregional trade in fresh or dried mangoes) – Malaysia, Viet Nam, Singapore and Thailand jointly imported about 180,000 tonnes of mangoes, mangosteens and guavas in 2021. Southeast Asian countries get their supplies mostly from the Philippines and Thailand. China is the largest importer of mangosteens from Thailand. Emerging importers like Saudi Arabia, United Arab Emirates and the Russian Federation are becoming increasingly lucrative markets.

The table shows the trend in imports of fresh or dried guavas, mangoes and mangosteens (HS Code 080450) by emerging importers in the last three years.

India has multiple mango hotspots and is home to at least 24 highly popular mango varieties. The following Geographical Identification (GI) certified varieties are exported from India:

Top export destinations for mangoes (in 2021-22) were the UAE, the UK, Qatar, Oman and Kuwait.

Major export destinations for Indian mangoes and the quantity exported

India is largely exporting to Middle-Eastern countries rather than to the leading markets of the US or Europe. The US market has been a rugged terrain for Indian mangoes, with a share of only 0.18% in this market. The major barrier was the former’s fear of pests and bugs, and insistence by their regulatory authorities on ‘elaborate’ US-certified irradiation processes in India. This has pushed up prices of Indian mangoes. The other major factor, according to reports, is the ‘powerful Latin American lobby’ protecting its monopoly (accounting for around 90% of imports by the US) and having the advantage of easy and fast access into the US market.

European market, too is dominated by the Latin American varieties. The UK and Germany are the two major markets for Indian mangoes in Europe. Alphonso, Kesar, and Banganapalli varieties of Indian mangoes have a huge market in Europe due to their high demand.

Indian mangoes: All set to spread their sweetness?

In January 2022, the Indian government has secured the approval of the United States Department of Agriculture (USDA) for export of mangoes to USA. A mango festival was organised in Tokyo, Japan as a part of Azadi ka Amrit Mahotsav in March 2022, and fresh mangoes (Alphonso and Kesar) were exported from Mumbai to Japan in March 2022. In June 2022, a Mango Festival was organized in Brussels to create awareness among the Europeans and create a market for Indian mangoes in Europe.

Similarly, mangoes are being sent to South Korea after a two-year gap due to the Covid-19 pandemic, and Malaysia has assured imports of Alphonso, Kesar and Banganpalli varieties of mango. India is also promoting export of Langda and GI-tagged Zardalu in Bahrain and organic mangoes to Russia this year. The Indian King of fruits is also being promoted in Riyadh, Thimpu, Kuwait, Dubai, Denmark and Berlin and Argentina.

Azhar Tambuwala, Director, Sahyadri Farms, opined in an interaction with IBT, “To address competitiveness for sale of fresh mango, there is a major need to experiment with sea shipments, as we are currently unable to export by sea. For short transit destinations like Dubai, we do send the products by sea. But for longer transit routes, air shipments are the norm.”

This air transit makes the fruit expensive, and therefore it can only reach a few select audiences, especially Indian/Pakistani consumers who understand the worth of these products. Local Europeans, Americans, Arabs or Europeans will not pay that high a price when cheaper alternatives are available. If sea trade is successfully cracked, business volumes can go up drastically. Besides this, a secure export traceability system will help ensure more reliability and trust in buyers.

Recently, there was an important development in this direction as Maharashtra Agricultural Marketing Board (MSAMB) collaborated with the Bhabha Atomic Research Centre (BARC) to improve the shelf life of mangoes and dispatch them by sea to the US. If India takes this initiative ahead successfully, it will be well-positioned to take the sweetness of its mangoes to hitherto untapped markets of the Western world.

Enquiry for Indian mango: Set for a boost of ‘Vitamin T’?