Indian edtech: Are we celebrating too soon?

Indian edtech has seen a surge in fortunes post-COVID, but beyond a few success stories, startups must factor in unique intricacies of the business model to be able to outlive the pandemic. Besides, companies have to devise ways to coexist with the traditional education ecosystem, which enjoys the faith of parents over several generations. 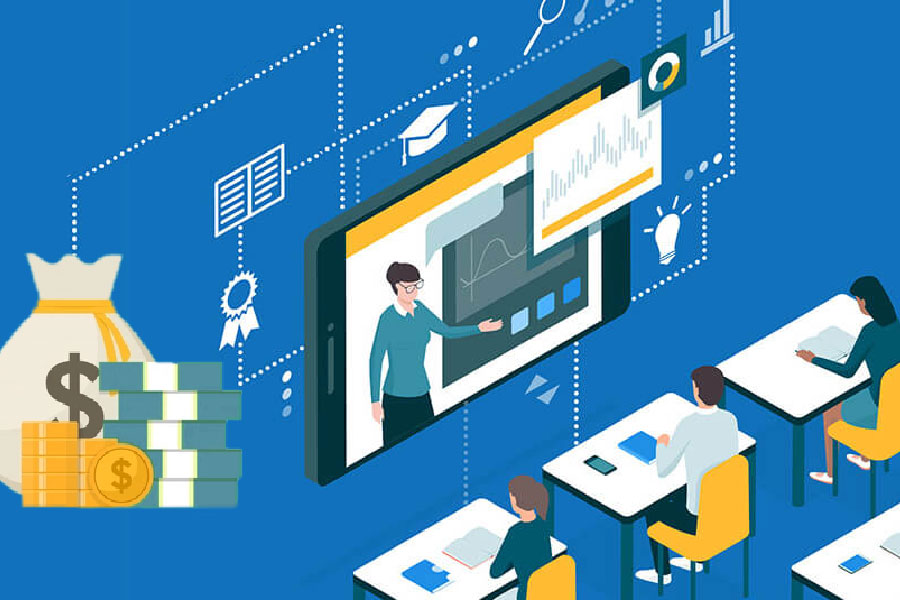 In 2018, the World Bank mentioned in its ‘World Development Report 2018: ‘Learning to Realise Education’s Promise’, that schooling without learning is a wasted development opportunity. The study noted that India ranks second after Malawi in a list of 12 countries wherein a grade two student could not read a single word of a short text. India also tops the list of seven countries in which a grade two student could not perform two-digit subtraction, something that the bank defines as a learning crisis.

The higher education sector is equally challenged. For instance, not a single Indian university found a spot in the top 300 universities on The Times Higher Education World University Rankings 2020. Similarly, Indian institutes have seen an average decline of 12 ranks in the latest QS World University Rankings. Clearly, there is much ground to cover if India wants to achieve its stated aim of becoming a global repository of knowledge and attract foreign participation in the sector. Beyond the rankings, the key concern is that a large numbers of students are unable to make use of the knowledge channels available to them. This has been attributed to problems such as a one size fits all approach, lack of innovation, skewed teacher-population ratio and lack of variety in courses.

Sensing opportunity for value creation in the sector, a number of Indian edtech startups have emerged that promise to revolutionise the education landscape. Over the past few months there is a sudden wave of enthusiasm for these platforms, given the restrictions placed on the good old halls of learning. There seems to be a widespread consensus that this model is rewriting the script for the classrooms of tomorrow. But is the overexuberance truly justified?

Edtech startups: At the cusp of the hockey stick curve

The onset of the pandemic has been a particularly opportune time for Indian edtech startups, ushering in a phenomenon known in business & finance parlance as the ‘hockey stick curve’. This situation refers to sudden dramatic rise — in sales, profits, EBIDTA, etc. — after a relatively flat period. The mass shift to online mode of education served as an inflexion point. Investments in edtech startups were growing at a CAGR of 49.4% between 2015 and 2019. In just the first half of 2020, they have grown by nearly 150% as compared to the entire calendar year 2019.

Several startups, which earlier struggled to entice consumers, recorded robust growth in new users, traffic, engagement, renewal, and course completion rates during this period. According to a recent report by RedSeer and Omidyar Network India, edtech users – both paid and free unique users – in K12 and post K-12 segments have doubled from 45 million to 90 million. While there was a massive 83% jump in the paid user base, there was a 40% rise in willingness to pay. The study estimates that online education offerings across Classes 1 to 12 are projected to increase by 6.3 times by 2022 to reach US$ 1.7 billion; while the post-K12 market is set to grow by 3.7 times to reach US$ 1.8 billion. 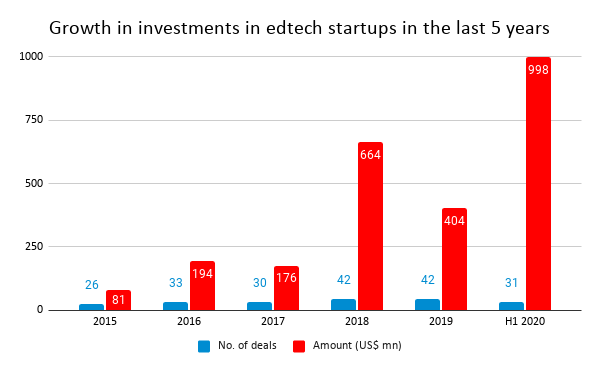 Dispelling the shadows of darkness

In theory, the edtech sector has adopted a number of m0dels, which are showing promise in terms of improving learning outcomes for students. Through personalised learning algorithms that allow services to adapt to each user’s pace and needs, companies like Vedantu allow tutors to draw insights about every student’s progress and hence undertake corrective interventions.

Besides expanding reach of education across the country, another challenge they can potentially help tackle is the low teacher-student ratio. According to a report by the Ministry of Human Resource Development, which compares 8 countries, India’s student-teacher ratio (24:1) has turned out to be the lowest – against Sweden’s 12:1, Britain’s 16:1, Russia’s 10:1 and Canada’s 9:1.

“A low student-teacher ratio indicates high burden on a single teacher as well as lack of individual attention for each student. Apart from this simplistic effect, in an institution of higher learning, a smaller number of overburdened teachers are also unable to pursue any research or encourage their students to do so,” notes the study. This consequently discourages the culture of questioning and reasoning. However, some startups have also commenced one-on-one sessions and provide free notes as an incentive to upgrade to premium plans that offer high quality content.

Prof. Nandu Nandkishore, Indian School of Business, notes that two models are in vogue with respect to using digital technologies in education:

One is the use of superstar faculty. In any class or any university, you can take a truly outstanding faculty, like Richard Feynman was for Physics, and let him/her be the digital face who gives that high quality of education in an asynchronous manner to all. The second change a move to flipped classrooms. Here, the job of the regular faculty will be more to discuss specific cases and applications of concepts taught by superstar faculties.

Another challenge that the traditional education model faces is the lack of variety in courses, which can be quite inimical for students suited for career opportunities beyond the school curriculum. One doesn’t necessarily have to be a doctor, engineer, teacher, lawyer or civil servant. Now startups are coming up with innovative solutions to address this. For example, WhiteHat Jr has come up with coding courses for those aged between 6-18; while upGrad offers courses in categories like data science and sales & insurance by professionals in top universities. Moreover, these startups are also resorting to innovative teaching methods such as VR, gamification of knowledge and use of animation, which can be quite useful for understanding and better registering of core concepts.

Despite the much lauded potential, edtech as an industry is in its very initial stages in India and the growth is still highly skewed. This is obvious from data on edtech funding between January 2014 and September 2019. Around 4,450 edtech startups were launched in India during this period, but around 25% shut down and only 4.17% were able to raise funds. Byju’s alone received 65% of funds during this period. This has continued through H1, 2020, when Byju’s got over 50% of investments. This skewed nature of funding makes it relatively tougher for newer players to compete. Also, investors have to be more tempered in their expectations for ‘time-to-scale’ for such businesses, as going too fast may prove to be fatal.

Failure rates are typically high in early stage startup ecosystems in any sector, but edtech is different, as it does not align with the scale and unit economics-based business models of sectors like e-commerce, cab hailing, fintech and foodtech. Given the unique aspirations, backgrounds, learning abilities and motivations of the target audience, an edtech company has to operate with a ‘mass customisation’ approach.

Without this, it is highly improbable that they will be able to build or sustain a scalable model, and chances of failure become high. To add to that, India has a highly de-centralised ecosystem of education with radically different approaches by universities, schools and colleges right down to the village and district level.

Unlike the traditional education ecosystem they seek to replace, edtech startups need to be spot-on in their content and delivery strategy to ensure interest, engagement and comprehension by each learner. Also, they need to be nimble enough to adjust it to changing needs and technologies in the marketplace. Besides this, it is important to set expectations right for all stakeholders before a transaction happens, since the courses are typically expensive. Even post-transaction, proactive, prompt and mature handling of customer feedback (which may not necessarily be objective like a delayed cab or pizza) becomes extremely critical. In the era of social media, a backlash can be extremely severe and go viral, denting hard earned brand equity quite swiftly.

Edtech firms have to realise that they are not a replacement for the traditional education ecosystem (add to that the private coaching classes). Despite its shortcomings, this framework enjoys the faith of families over generations. Too much of clutter in the market in the name of edtech can be confusing for parents and children already burdened with the push and pull of school life. The sector needs to think of ways to coexist with the current education framework, without which adoption will be tough, irrespective of how good the product is.

Moreover, teachers and students alike are generally convinced that digital learning could take some getting used to, and can never be the same as face-to-face interaction. The rise of digital learning has undoubtedly accelerated investor interest and customer growth in edtech. But post-COVID, the scenario may change radically, as physical classrooms take over once again.

Enquiry for Indian edtech: Are we celebrating too soon?