India’s chemical industry has benefitted from a gradual shift from China over the past few years due to the latter’s stricter environment norms. The current post-COVID paradigm has further given India headroom for growth, particularly in the area of specialty chemicals. However, the industry at large must learn from the experience of other chemical hubs, including China, US and Europe, and embrace sustainability as an integral part of business strategy. India’s chemical industry is currently ranked 6th globally and 3rd in Asia when it comes to production. According to 2017 estimate, its contribution to India’s GDP stand at 2.1%. The industry is a base for agriculture and industrial development of India. Also, the industry is greatly diversified with producing around 80,000 products which includes the basic chemicals and their products, petrochemicals, paints, fertilizers, gases, varnishes, perfumes and toiletry, soaps and pharmaceuticals.

India is a dominant global dye supplier, with around 16% share of global production of dyestuffs and dye intermediates. In 2019-20, India became a net exporter of chemicals for the first time in the past ten years. According to D V Sadananda Gowda, Minister of Chemical and Fertilizers, GoI, the chemical industry has the potential to contribute US$ 300 billion to India’s GDP by 2025.

The share of chemical products in total merchandise exports of India has seen a rise from 9.21% in FY 2010-11 to 14.4% in FY 2019-20. This has been driven, in part, by government polices including a cut in in GST rates for fertilizer to 5% from the decided rate of 12%. Also, 100% FDI has been allowed by the government in Indian chemical sector under the automatic route. 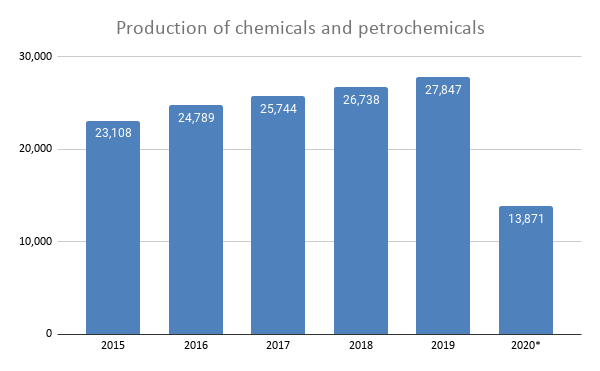 The production of basic major chemicals and pharmaceuticals increased to 27.85 million metric tons in 2019 from 23.11 million metric tons in 2015, growing at a CAGR of 4.78%. The specialty chemicals segment accounts for around 18% share in the chemicals and petrochemicals market. Growth has been driven by increasing disposable incomes, urbanisation, significant share of median age people in the population and growing demand in rural markets. Other factors include shift in production and consumption toward Asian countries; change in consumer preferences with inclination toward healthier life styles and opportunity to meet domestic demand of around US$ 111 billion worth of chemical products by 2023. 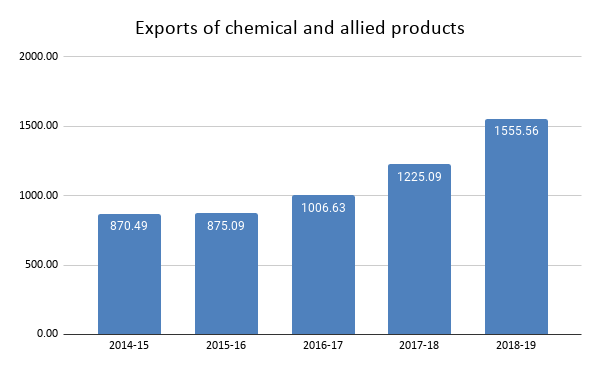 As per the CAPEXCIL annual report for 2018-19, exports of chemicals & allied products have risen from Rs. 870.49 billion in 2014-15 to Rs. 1,555.56 billion in 2018-19, growing at a CAGR of 15.61%. India’s ability to manufacture products at lower cost and capitalise on rising demand in the export market are major factors driving growth in demand. MNCs from across the world are shifting their focus to India from China, which is presently the largest producer of chemical products in the world.

This is happening largely due to much stricter environmental norms in China. The Chinese government in its 13th 5-year plan has focused on addressing the environmental degradation in the country. These strict environment norms have resulted in a disruption in the chemical value chain, with shutting down of companies that are not following the prescribed norms. During 2017-18, 40% of the total production capacity of monosodium glutamate and dyestuffs and pesticides was shut down, which also drove up prices by 50% in the global market.

Source: The Indian chemical industry: Unleashing the next wave of growth, McKinsey & Co., figures in % for period December 2006-2019 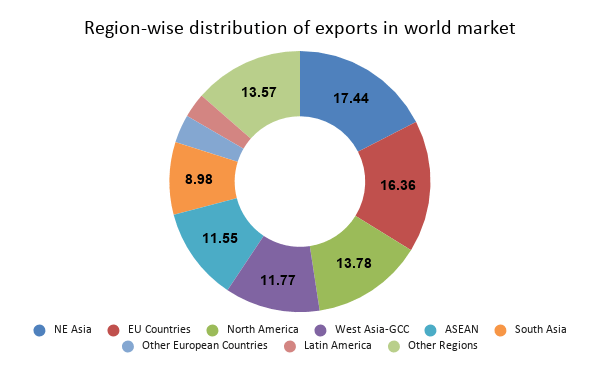 The industry’s leading segment is specialty chemicals with a share of 55% in India’s total chemical products exports in 2018. Still, India’s share in this segment is just around 3% with China, Germany and Japan being the leading exporters. China corners around 15% of the global US$ 700-750 billion chemical market. Given the intensified US-China trade war and the post-COVID movement to shift demand from China, India has a lot of scope to emerge as an alternative source. 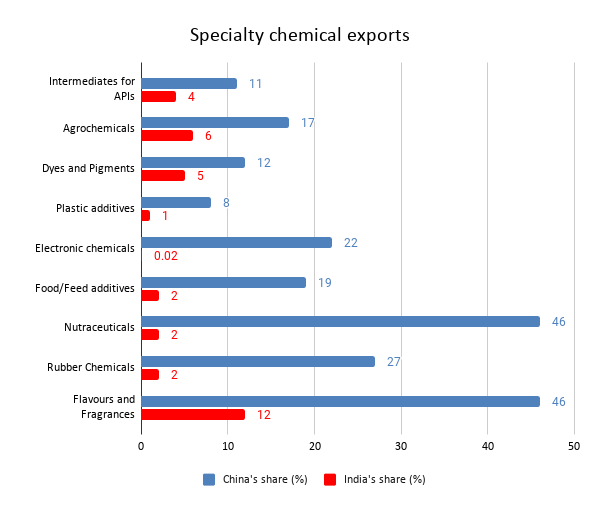 Source: The Indian chemical industry: Unleashing the next wave of growth, McKinsey & Co., figures in %

For intermediates for APIs, agrochemicals and dyes and pigments, India has shares of 11%, 17% and 12% respectively, while the share of China is 2.7 times higher. Given the current base of specialty chemicals, India can increase its exports by expanding its capabilities. Also, an added advantage to Indian specialty chemical manufacturers is the fall in crude oil prices. Derivatives of crude oil are used as raw materials in specialty chemicals production.

Another opportunity for the Indian chemicals industry is to lower its import in petrochemicals and build self-sufficiency. Petrochemicals have the largest share (44%) in India’s total chemical imports. A pathway to reduce imports is addressing the constraints the industry is facing in the value chain.

One critical constraint is access to feedstock, which can be addressed by forming partnerships with local refineries. Currently, domestic supply is short of 52% of the volume demand of petrochemicals intermediates. The Indian government is focusing on development of Petroleum, Chemicals, Petrochemicals and Investment Regions (PCPIRs), which will help boost domestic production and exports.

The upside potential is high, but the industry must not ignore the sustainability challenges that have faced other chemical hubs like US, Europe and China. Climate change remains a pressing and existential threat for chemical companies across the globe, and Indian players must be proactive towards addressing it.

On the positive side, the industry has developed technologies such as microbial de-colorization and degradation procedures for textiles, biodiversity for natural dyes and eco-friendly methodology for synthetic dyes. Public sector refiner Hindustan Petroleum Corporation Ltd (HPCL) is planning to introduce green lubricants developed from renewable feedstock. Gujarat Fluorochemicals Ltd has stopped using refrigerants that are a major cause of pollution and ventured into new generation 400 series blends.

Some of the major issues of sustainability faced by the industry include supply of water, air and ground water pollution and energy consumption. On the positive side, they are recognising sustainability as both a business driver and business outcome. Innovation goals of various companies are centred on growing sales from existing products that have become more sustainable as well as new products based on green chemistry. But this needs to be inculcated across the industry at large.

Given the large share of SMEs, a supportive ecosystem needs to be ensured so that they can upgrade their technologies, adhere to global standards like REACH (Registration, Evaluation, Authorisation and Restriction of Chemicals) and yet stay competitive in a tough global marketplace. There is a need to ensure better infrastructure for safe storage and transportation, provide adequate raw materials/sustainable power and incentivise SMEs to be compliant with best practices and invest in innovation.

Enquiry for Indian chemical industry – Building a ‘climate’ of confidence