Indian audio visual industry: All the world’s a stage

• The size of the global film industry stood at US$ 39 billion, registering a CAGR of 8% during 2013-2017.
• The Indian film industry grossed a total revenue of US$ 2.1 billion in 2015, with a global rank of 3 & a share of 5.4%. Going forward, the industry is expected to grow at 11.5% year-on-year, reaching a total gross realisation of US$ 3.7 billion by 2020.
• Indian films, including both Bollywood and regional films are steadily improving their reach and popularity across overseas markets.
• The Government of India has identified audio-visual services as a champion services sector, to enable the sector to achieve its long-term potential.

India is home to the largest, and arguably the most diverse media and entertainment industry in the world. The country produces the maximum number of hours of content across  the world – 2,000 films, 800+ TV channels, 250+ radio stations, 10,000+ newspaper and magazine editions and thousands of live events. It has the world’s largest film industry, both in terms of tickets sold and number of films produced.

In terms of audio-visual exports, India is ranked 4th in the world. Overall, India’s media and entertainment exports are valued at US$ 1 billion currently, with the potential to reach US$ 10 billion in the coming years.

TPCI in association with the economic division of Ministry of External Affairs organised a roundtable seminar on Export Promotion of Indian Cinema & Audio Visual Services on March 25, 2019 in Mumbai. The seminar was chaired by Shri Manoj K. Bharti, Add. Secretary (ED & States), Ministry of External Affairs, supported by Ms Sangeeta Saxena, Director, Department of Commerce and Mr Mohit Singla, Chairman, TPCI.  Over 30 prominent distributors, producers and directors from the film fraternity attended the seminar. The participants broadly deliberated upon the avenues and hurdles experienced by the industry for exporting of films to CIS and other countries. 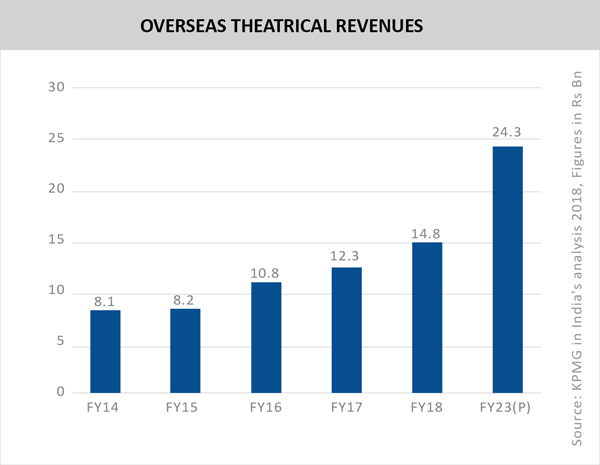 During the discussion, Shri Manoj K. Bhartia asserted, “India is missing out on a huge segment of exporting films content, which is an immense market across globe.” He added that Indian films are still regarded and respected for their societal and emotional content. For promotion of the sector, market access and state facilitation funds are available, which missions are required to facilitate.

India is now the world’s fastest growing market for audio-visual equipment & the audio-visual sector. AV technology includes equipment in the areas of video, lighting, display and projection systems. The audio-visual (AV) market in India is expected to grow at a high CAGR of 25%, on the back of spending in sectors such as education, infrastructure and corporate information technology. The global AV market is projected to grow by 14% to generate US$ 185 billion by 2020. By that year, India is set to become the third largest market in the Asia Pacific.

Audio-visual services is among the sectors where the number of WTO members with commitments is the lowest (50, as of January 31, 2019), even though most of the prominent producers have some commitments. Commitments are generally higher in movie-related services as compared to TV and radio-related services. Another major aspect that’s peculiar to the sector is the high number of exemptions to most-favoured nation (MFN) treatment in areas like film co-productions. This means that the AV sector is protected/restricted.

The Indian GATS schedule of specific commitments only contains relevant commitments for motion picture or video tape distribution services as concerns under Mode 3. The number of import titles is restricted to 300 per year and the services can only be supplied through representative offices. The apparent purpose of such limitations is to both restrict the import of foreign films and to ensure the cinematographic quality of imports. India equally scheduled an MFN exemption for audio-visual services for promotion of cultural exchange.

Audio-visual services commitments are strongly related to a country’s trade balance in the sector. A few countries, especially the US, have exploited bargaining leverage to extract assurances from PTA partners to ensure improved access. Cultural ties appear to play a role in commitment coverage

Cross-border supply and commercial presence are the dominant modes of delivering audio-visual services. More than 70% of global AV services trade happens through mode 1 and mode 3.

Films produced in India are getting increasing appreciation across the globe. Revenue from overseas theatricals reached Rs 14.8 billion in FY 2018, growing by 20.6% yoy. It is estimated to register a CAGR 10.3% during FY 2018-23 to reach Rs 24.3 billion in FY 2023 according to a report by KPMG. Over the past few years, the overseas market has witnessed a resurgence, particularly due to the entry in new markets like China.

Bollywood has made a strong mark in overseas markets over the years, and regional films are also receiving appreciation of late. Even small and medium-budget movies are now being extensively promoted in overseas markets. Some of the major markets for Indian movies include US, UK, Canada, CIS region and Gulf countries.

However, marketing a movie abroad is an expensive enterprise. Typically screen owners take a much higher share of revenues. Movies have to go through several rounds of editing, sub-titling/dubbing and promotion, which entail a huge cost. Players need to carefully measure the cost-benefit analysis of marketing overseas, as success would depend on the strength of the movies content, as well as how it is received by viewers in a particular market.

The expert panel deliberated on some of the measures for promotion of the sector, including tax returns on films, liberalisation of trade policies, leveraging media and reaching out to students in target markets. The industry also stressed on the need to proactively address the demand supply gap and ensuring authenticity of content to build faith among foreign buyers. Panelists also discussed prospects of a single window promotional activity via Mode 2 to enhance popularity of Indian states for film shooting and setting up a single council for film promotion.

India’s entertainment sector has historically enjoyed a special appeal in CIS countries, especially Russia, due to the fact that Indian cinema has had the advantage of accessibility in the sector over a long period of time, when penetration of Western cinema to the Russian market was limited. Specific areas of interest to India lie primarily in animation, broadcasting and telecasting services apart from exporting motion films.

India’s entertainment sector has historically enjoyed a special appeal in Russia, especially, due to the fact that Indian cinema has had the advantage of accessibility in the sector over a long period of time, when penetration of Western cinema to the Russian market was limited. India would like an enhanced access in this sector, especially for post-production activities. Specific areas of interest to India are animation, and broadcasting and telecasting services. Popular Indian films can find a market in Russia after being dubbed in Russian and India should explore this segment as well.  Russian cinema industry is regaining its strength very fast. The possibility of Russian movies entering Indian market may be considered.

Enquiry for Indian audio visual industry: All the world’s a stage