India vs Pakistan: Who owns the Basmati Rice GI?

India’s application to get GI tag on Basmati Rice in the EU market is on hold as Pakistan opposed the move with its own claim. While fiercely defending its turf on historical veracity, India must proactively address the pesticide issues that are impacting Basmati Rice exports and indirectly strengthening the hand of its rival. 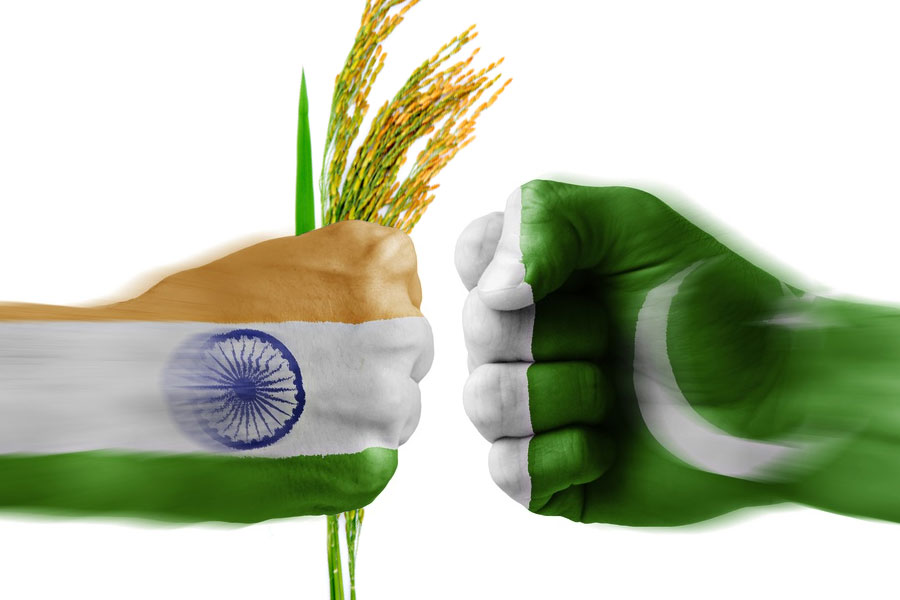 Besides their geopolitical rivalry India and Pakistan have a long shared history that expresses itself in interesting ways. Food is definitely one of them. Any global traveler who would visit India-themed restaurants managed by Pakistanis (or even Bangladeshis) will certainly vouch for this fact. Essentially, while they are now separate countries with wide divergence in opinions, they do tend to try and leverage India’s historic pan-global brand image in cuisine to captivate their audiences.

This kind of ‘brand parasite syndrome’, if we may call it that, is also seen in specific products, which have developed a recognition for their unique characteristics due to the regions from where they originate. An instance of this is teas from Nepal being sold as Darjeeling Tea. This blog itself focuses on one such product, which is the subject of an ongoing ‘GI ownership’ dispute between India and Pakistan at the EU – Basmati Rice.

It all started when India registered its Basmati Rice GI in the European market last year, which has been countered by Pakistan. An official release by the European Union on September 11, 2020, notified India’s application for getting the geographical indication for its Basmati Rice in the EU market. The release also indicated that in the next three months, any entity, which objects to this application, can oppose it in the EU. The specification, which described Basmati Rice in India’s application with the EU, is as follows:

“Basmati is a special long grain aromatic rice grown and produced in a particular geographical region of the Indian sub-continent. In India, this region is a part of northern India, below the foothills of the Himalayas forming part of the Indo-Gangetic Plains (IGP).”

On 7th December 2020, the application received opposition from Pakistan, when its rice association, Rice Exporters Association of Pakistan (REAP) filed a notice with EU authorities. To further strengthen its case of opposition, Pakistan registered its Basmati Rice under its Geographical Indication Act 2020 on January 27, 2021. The case is still pending with no conclusion being reached.

Under the TRIPS agreement, Geographical indication (GI), is defined as an indication of the true geographical origin of products, with reputation, quality, or other characteristics of that product attributable to the origin. Countries issue GI tags to their products under the law, in order to protect the product from imitation and misuse of its registered name. In India, the Geographical Indications of Goods (Registration and Protection) Act came into force in 2003. As of 2019, 370 products are under Geographical Indication in the country. A well known example of a GI product of India is ‘Darjeeling Tea’, which comes from the Darjeeling region of India.

Exports of rice are of importance to both India and Pakistan. Pakistan’s Punjab, in which all of its ‘Basmati Rice’ (as claimed by it) production is located, also lies in the Indo-Gangetic Plains. India is the largest supplier of Basmati Rice, exporting 5.5 million tons of Basmati Rice to the world in 2020. Its production is spread across Punjab, Haryana, Delhi, Uttarakhand, Western UP and parts of Jammu and Kashmir.

In 2019, India exported 4.4 million tons of Basmati Rice, out of which just 2% was supplied to EU countries. In comparison, Pakistan’s exports volume is much lower at 846.8 thousand tons in 2019. However, Pakistan is relatively more dependent on the EU market, with 14.8% of its Basmati Rice being supplied to the EU countries in 2019.

As per Malik Faisal Jahangir, vice-president of the Pakistan Rice Exporters Association, Pakistan wants to convince India for ‘joint recognition’ as the heritage is shared by both the countries. 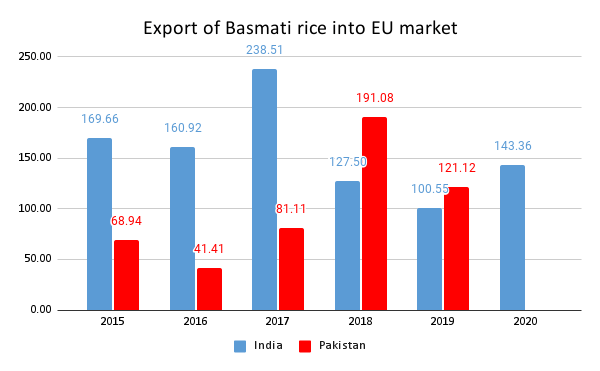 According to studies, brand recognition of Basmati Rice in different export markets has made it more profitable than the non-Basmati Rice. The price of GI products, on average, is 2.23 times the price of non-GI products in the EU market. GI products represent 5.7% share in the total F&B imports of the EU.

In terms of total exports to EU countries, India and Pakistan are close competitors. Data shows that since 2017, India’s exports of Basmati to EU countries has declined, while the exports of Pakistan has seen a rise. The fall in India’s export of Basmati Rice to the EU. One reason for this is the pesticide tricyclazole, which is banned by the EU and is used by Indian rice growers. This has put Pakistani exporters at a temporary advantage.

The reason for fall in exports during April-May 2021 has been slowdown in demand amid the coronavirus pandemic. Furthermore, some of these countries are tightening their pesticide norms on Basmati rice which is expected to impact India’s exports in the future. Vijay Setia, Executive Director, Chaman Lal Setia Exports, comments that India needs to tighten its pesticide norms, adding:

“Rice industry and APEDA are campaigning to make the farmers aware about the pesticide use in the production of crops. In many cases under contract farming in India, maximum pesticide usage spending is Rs. 3,500-4,000 per acre to manage the crop. However, farmers depending on commission agents may use Rs. 6,000-7,000 per acre. It also goes up to Rs 9,000-10,000 per acre.”

Thus, a GI tag in EU will be a step in the direction of a brighter future for Indian Basmati. In case the decision is in favour of India, having a GI tag would grant Basmati Rice brand recognition in the EU market.

Who is the true owner?

India has a stronger case in this regard, as Basmati Rice has an old heritage, even before Pakistan was formed. In 1939, “Dehradun Basmati” was recognized as an elite product by the Britishers after its examination by AGMARK officers. Moreover, historian S Chandrasekharan also asserts that Basmati Rice was never grown in West Punjab (now Pakistan) during the pre-partition days. Vinod Kumar Kaul, Director at All India Rice Exporters Association (AIREA), supports this. He states in an interaction with India Business & Trade:

“India has a very long history of Basmati Rice. This product is a thousand of years old heritage product for India, with the reference present in the poetries since the time of King Akbar. This clearly signifies that Basmati is an original product of India, and makes its case significantly strong against Pakistan’s claim which has recently registered its Basmati Rice under GI tag.”

Also, Article 22.1 of TRIPS classifies that “origin” and “territory”. India has specifically classified its Basmati Rice in EU application using these words which again provide strong support to India’s case. The precise area based on quality, reputation and other characteristics lies in India.

A possibility of having a joint recognition is also meager as there have never been GI tags that cross international borderlines. Furthermore, the compromise between India and Pakistan also is challenged by geo political reasons. Harsh Hiroo Gursahani, Partner at PLR Chambers, comments,

“India cannot reach a compromise due to multiple geopolitical reasons. Furthermore, under GI framework, just any rice grown can not be considered Basmati. Law and order in Pakistan cannot be easily trusted to assure the certification is true which is a major issue in this case.”

Despite being caught napping when India submitted its GI application, Pakistan appears to be aggressively lobbying to somehow grab the brand equity of Basmati Rice (or at least keep the case on), despite not having a genuine ownership claim. It’s willingness to accept a compromise formula may also be viewed as a clear indication of the weak ground for its claim. India must be wary of this attempt and stand by its historical veracity to defeat Pakistan’s ingenuine claim on logic. Winning the case in the EU will be crucial to boost the brand of Basmati Rice in other markets as well.

At the same time, however, India will have to expedite measures to address the pesticide issues that has affected its Basmati Rice exports over the years, and indirectly strengthened the cause (even if spurious) of its rival on the Western border.

Very well written article and intact the need of the hour.
amalfarm.com is also trying to promote the GI tag agricultural products officially by registering both amalfarm and their farmers as AU within the GI designated area.

Thank you for sharing this informative blog with us. this is really helpful to know about the Basmati rice in India

Enquiry for India vs Pakistan: Who owns the Basmati Rice GI?