A CATR report on India-UK trade Agreement concludes that UK’s GDP per capita and overall GDP are more significant determinants of India’s export trend as compared to trade barriers. The report projects that India’s exports could grow by 9-10% by 2025 in the event of an FTA being concluded today between the two trade partners. 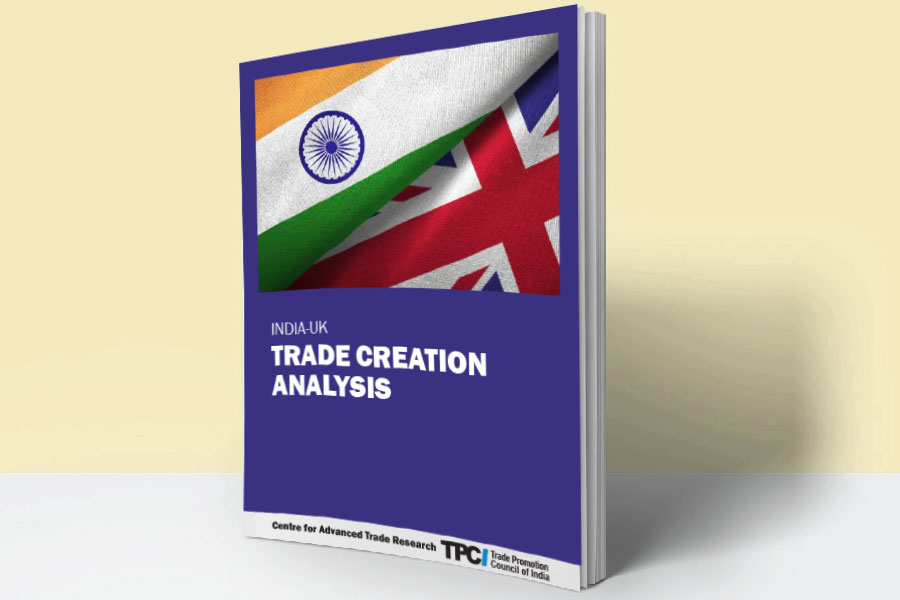 The UK has left the European Union after the much prolonged and highly debated Brexit. It is now undergoing a fresh start by signing new trade agreements with countries in order to maintain international relations and benefit from trade spillovers. Japan and EU have been among the first few nations to have signed an FTA.

In May 2020, the United Kingdom and India announced a new enhanced deal on trade at a virtual summit. The two countries have announced £ 1 billion of new trade and investment under this new Enhanced Trade Partnership. This includes Indian investments worth £ 533 million in Britain, including £ 240 million by the Serum Institute for the production of Oxford-AstraZeneca vaccines and sales.

British companies, on the other hand, have signed £ 446 million worth of export deals. The two sides have made a joint commitment to start working towards a comprehensive free-trade agreement, for which discussions are due to commence in autumn. UK has identified India as a key partner for its progress in the post-Brexit context.

In its latest research paper on Ind0-UK trade, CATR, the research arm of Trade Promotion Council of India tries to look at the kind of prospects a trade deal between India and UK will unfold for both the countries. A special emphasis has been laid on India’s export outlook to the UK. The report looks at the structure of the two economies, the top markets from which goods are imported and exported and how the trade basket changed over the last five years. 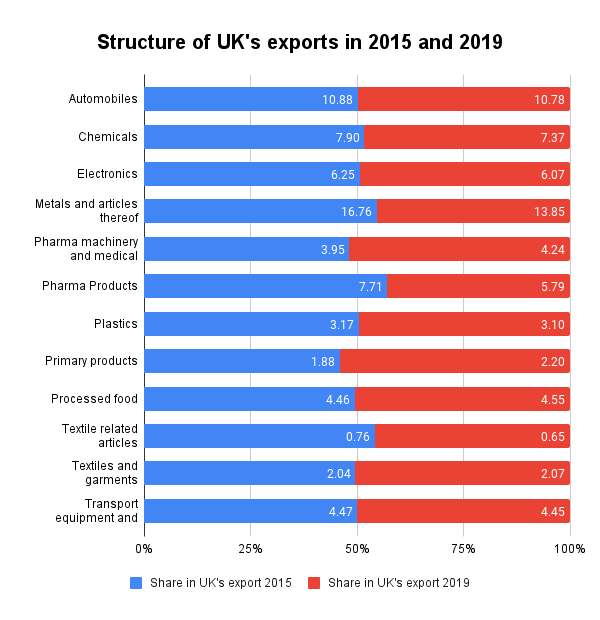 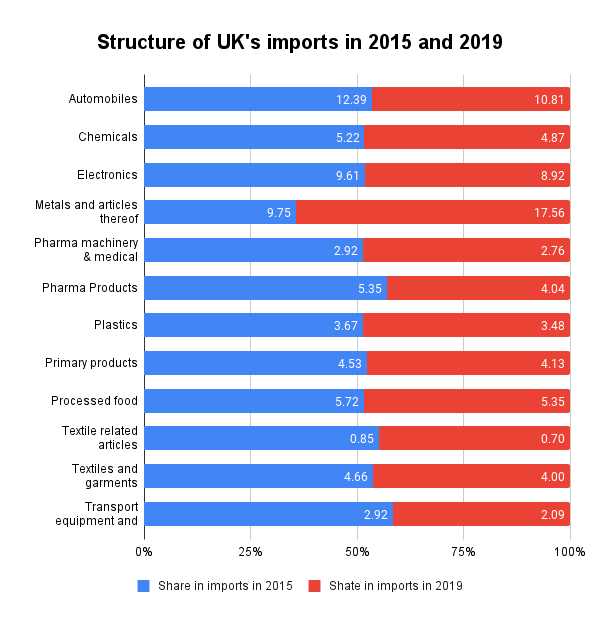 UK is the ninth-largest economy in per capita GDP (PPP value terms) and fifth-largest economy in nominal GDP terms as per IMF (2020) estimates. Endowed with a highly educated workforce, it is counted among high-income economies. After the revival from the 2008 crisis, the growth of the UK has hovered close to 2%. With a peak realized in 2014 (growth rate of 2.6%), it has especially experienced a severe downfall in growth from 2.4% in 2015 to 1.9% in 2016. This can be attributed to the Brexit referendum. Now, it is keeping with the global trend of a slowdown due to the COVID-19 pandemic.

UK’s sectors of expertise include pharmaceuticals, military aerospace, and civil. Its agriculture sector constitutes 0.6% of GDP, but can satisfy only 60% of its demand. Its industrial sector constitutes 21% of GDP, but is troubled with productivity and competitiveness issues. The services sector is its backbone, constituting 75% of GDP and employing 81% of its population.

India is the third-largest economy in per capita GDP terms (PPP value terms) and sixth-largest in nominal GDP terms as per IMF (2020) estimates. Its large population lowers the per capita incomes and makes it a middle-income, developing economy. India was the fastest-growing major economy between 2014 to 2018. Its GDP growth started to decline from the peak of 8.26% in 2016. In 2019, this economy grew at a 5.02% rate. India’s young population and consequent lower dependency ratio, greater integration to the world economy, huge savings, and investment rates bring in a positive outlook for this economy, even after the pandemic.

India’s service sector is its specialty. Even though it employed about 32% of the workforce in 2019, it accounted for 53.77% of the GDP. Industry and agriculture employ 25.6% and 42.4% of the workforce and contributed 31.12% and 15.11% respectively to the GDP of 2019. Agriculture and allied activities like fishing, forestry, and logging constituted 17% of GDP in 2014. Agriculture yield is, however, a concern in India, as it is at about 30-50% of the global agriculture yields. The manufacturing sector, on the other hand, is highly liberalized. There are significant domestic as well as foreign investments. The Gross Fixed Capital Formation (GFCF) i.e. investment in fixed assets in FY20 was at US$ 614.85 million.

The report concludes that automobiles, chemicals and electronics are the main product categories overlapping in India’s export and UK’s import basket. To analyse the major product categories that should be emphasized during the trade agreement, the report uses the gravity model – a popular approach in international trade analysis.

The results show that India’s pharma machinery, plastics, primary products, textile-related products, metals, and automobiles, despite being competitive in the global market, are not penetrating the UK market. According to the report, this trend, despite India’s competitiveness in these products and strong trade complementarity between India and the UK, is due to two reasons.

The first is the mismatch in the kind of products demanded and supplied. For instance, India specialises in small and medium segment automobiles and the UK too is a huge producer of this segment of cars.

Secondly, India is catering to markets other than the UK for these product categories. CATR proposes an impetus on the remaining products via a trade agreement in order to increase their market presence, as well as a special emphasis on plastics, primary products, pharma machinery and textile-related items.

On looking at the non-tariff barriers faced by Indian products in the UK, TPCI observes that chemicals, primary products, processed products and electronics are the most protected sectors in the UK, and hence Indian exports in these categories suffer.

Further, to find out what the trade agreement holds for the future, CATR runs the gravity analysis for the past 23 years on 12 product categories. The results show that tariff doesn’t turn out to be a significant variable for India’s exports to the UK whereas GDP per capita and GDP (current US$) of the UK prove significant.

However, with a trade agreement in place and the inherent nature of trade agreement of yielding multiplier effects in benefits, the export growth can be expected to be around 9-10%, looking at the UK’s import basket and the inelastic nature of India’s products having most potential in UK (i.e. as mentioned earlier, plastics, textile related items, pharma machinery and primary products).

Sourced from the CATR report on Indo-UK Trade Creation Analysis. To view the report, click here.