India-UAE ties in a post-pandemic world

India & UAE have come a long way in their five-decade-long partnership. As they look at economic recovery in a post-pandemic world, they must bolster cooperation on various facets of their comprehensive strategic partnership including trade, investment, infrastructure, energy, food security, and defence. The bond that India & UAE share goes back to centuries when they traded traditional items such as dates, pearl and fish. The trade underwent a sharp change after the discovery of oil in UAE (oil exports began from Abu Dhabi in 1962). However, their ties took a turn for the better in 1972 when India and the United Arab Emirates established diplomatic relations. The two nations have come a long way in the last 5 decades from 1972 when they had total trade of just about US$ 180 million.

This partnership has been marked by close people-to-people contacts, shared synergies and deepened bilateral relationships. For example, in 2019, Indian Prime Minister Narendra Modi was conferred with the highest civilian award, ‘the Order of Zayed’, by the UAE President. Further, the importance of India’s Gulf link was even evident in Prime Minister Narendra Modi’s Independence Day speech in 2019, referring to robust ties between India and the countries of West Asia.

The UAE is key amongst the Gulf countries for India, not just being home to over 3.3 million Indians but also being its third-largest trading partner globally. Dubai, one of the most important megapolises globally, has become an innovation hub in recent years. The city is home to 3,000 start-ups, with 30% of the staff being Indians. UAE’s investments in India’s food sector, logistics, ports, airports, renewable energy, and petrochemicals make it the 8th largest source of FDI inflows in the country. In fact, India received inflows of US$ 11.2 billion from the Gulf country between Apr 2000-March 2021. All sectors result in significant job creation for thousands of citizens.

In 2020-21, UAE and India’s bilateral trade was at US$ 43.32 billion. It is anticipated that this would grow to US$ 100 billion by 2030. India’s exports to UAE were at US$ 16.7 billion while imports from the Middle East country was at US$ 26.6 billion. The potential is higher, especially if the India-GCC Free Trade Agreement (FTA) is able to see the light of the day soon. Analysts have identified that about 1,100 products including washing machines, air conditioners, refrigerators, spices, tobacco, textiles, and leather can witness higher exports through the pact. “We have a geographic advantage with that region and a lot of business travel happens. Long-term business visas will be beneficial for India,” commented an expert on trade issues.

According to a prelimiary analysis of India-UAE trade basket, some of the products with high export potential  include Articles of jewellery and parts thereof, of precious metal other than silver; Diamonds, worked, but not mounted or set; Medium oils and preparations, of petroleum or bituminous minerals; Medicaments; Turbojets of a thrust > 25 kN; Parts and accessories, for tractors, motor vehicles; Made-up articles of textile materials, incl. dress patterns, nes; Floating or submersible drilling or production platforms; Oils and other products of the distillation of high temperature coal tars and new pneumatic tyres of rubber, of a kind used for buses and lorries.

Digital mediums, with their enterprising and futuristic models, could help bring in new opportunities and catalyse exports further, building on the already strong affinities between the two countries. For instance, Amazon India, with the help of Souq, a Dubai-based e-commerce company, set up its export business to allow India’s online vendors to export their products to the UAE in 2019. 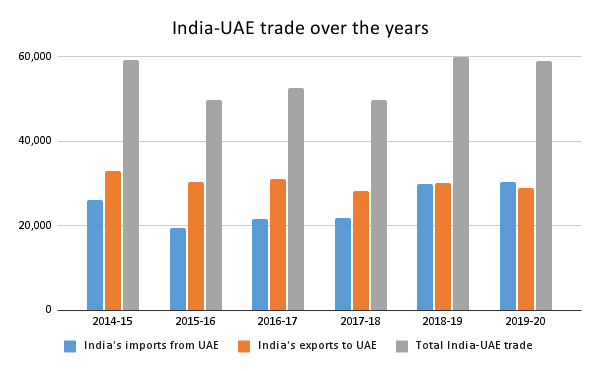 Source: Indian Embassy in UAE. All figures in US$ million.

As the two countries vie for US$ 100 billion trade, some of the major areas of investment will include refining, energy, petrochemicals, agriculture, infrastructure, minerals, and mining. The UAE, along with India’s fourth-largest trading partner, Saudi Arabia, has been a key partner to help India meet its energy needs, with a majority of oil being imported from the two nations. In fact, India will be increasingly integrated with UAE and Saudi Arabia’s investments and collaboration over time. This will become especially critical as India’s energy sector is the fastest-growing globally, as per the International Energy Agency.

India’s investments in the Emirate country are into sectors such as real estate, transportation, logistics, construction, financial services, and manufacturing. It is estimated that more than 4,300 Indian companies including leading companies like Indian Oil Corporation, L&T, Reliance Industries, Tata, HCL Infosystems, HDFC, ICICI Bank, State Bank of India amongst others have offices in the UAE. The two countries also have robust connectivity with over 1,000 flights operating of all leading airlines and it is estimated that the large Indian community in the UAE contributes to about US$ 17 billion in remittances for India. In a meeting last year, India invited further investments from UAE in sectors like logistics, food parks, highways, ports, airports, renewable energy and defence.

The UAE is also keenly exploring India as a strategic partner for defence. In 2018, it inked defence cooperation agreements for deepening ties at the IDEX military exhibition in the UAE with Indian Ordnance Factories signing a deal for supplying ammunition to the Emirati military. PM Modi noted, “We have agreed to expand our useful cooperation in the field of defence to new areas, including in the maritime domain. The MoU (memorandum of understanding) on defence cooperation… will help steer our defence engagements in the right direction.” In the same year, a defence delegation led by UAE Minister of State for Defence Affairs, Mohammed Ahmed Al Bowardi Al Falacy had shown interest in purchasing the ‘Made in India’ Akash surface-to-air missile system.

Recovering from the twin setback

The growing strategic partnership, however, faced a temporary loss in momentum due to two crucial developments last year: oil demand falling to its lowest levels in decades, disagreements within the group of oil-exporting nations on supply cuts, and the COVID-19 pandemic. Oil price falls implied reduced hiring in these countries. This impacted Indian households that rely on remittances, thereby leading to a 17% dip in remittances from the region.

Further, nine million citizens were stranded in the GCC countries, including the UAE last year. These were repatriated from the UAE under the Vande Bharat Mission, the country’s biggest-ever repatriation exercise. At the peak of the oil price war in March 2020, India, in a futile attempt, tried to strike a deal with Saudi Arabia and the UAE to allow them to park their excess oil stock in India’s strategic petroleum reserve. Eventually, India ended up buying oil stocks from countries holding excess supply to build up stocks while prices remain low.

However, the World Bank expects both economies to rebound in tandem with the recovery of the global economy. The two nations are focusing on using mutual ties to fight the battle against COVID-19. External Affairs Minister S Jaishankar and Chief of Army Staff Gen. M M Naravane met the UAE’s top leadership in separate meetings last year to discuss prospects for economic cooperation in the post-COVID-19 era. It was understood that rebuilding their economies would require enhancing cooperation on various facets of the comprehensive strategic partnership including trade, investment, infrastructure, energy, food security and defence.

Enquiry for India-UAE ties in a post-pandemic world