India’s concerns on possible rise in trade deficit with RCEP participation are understandable, but it should consider other ways of engaging with the value chains of East and Southeast Asia, besides enhancing its own attractiveness as a business destination. 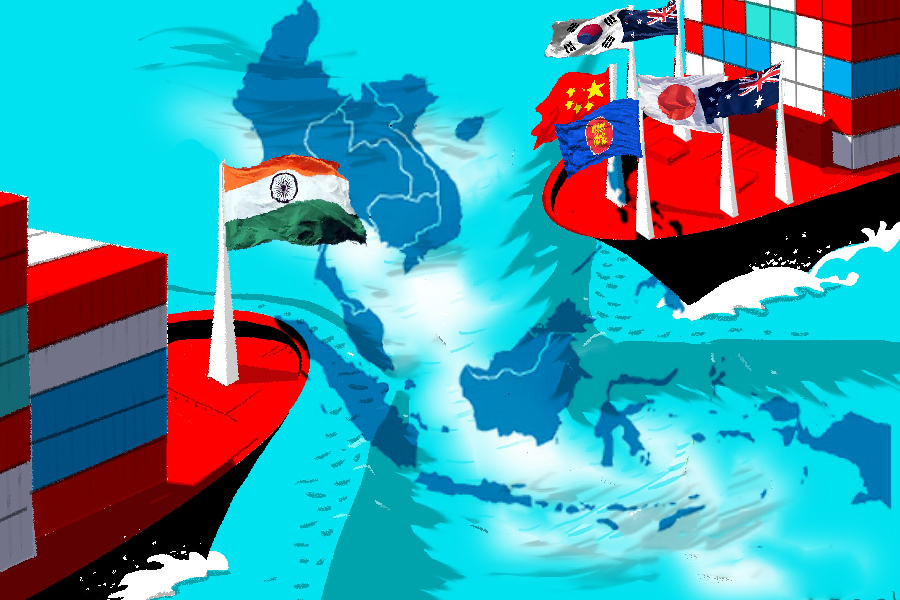 On November 20, 2020, 15 nations of the RCEP grouping, namely ASEAN plus its FTA partners China, Japan, Australia, New Zealand and South Korea officially ratified the Regional Comprehensive Economic Partnership Agreement without India. Together, the RCEP nations account for 30% of the global economy and population and a consumer base of 2.2 billion people, making it the world’s largest regional trade bloc. The development has brought into focus India’s decision to opt out last year once again, as well as the possible future course of action in its trade policy.

The RCEP agreement will bring down or remove tariffs on a wide gamut of goods and services and put in place frameworks for rules of origin, customs procedures and trade facilitation, trade remedies, intellectual property, movement of professionals, etc. But it does not set standards on issues like environment, labour, procurement processes, corruption and state-owned enterprises.

RCEP is often juxtaposed with the other mega regional in the Asia Pacific – the CPTPP. However, the template of the RCEP itself is relatively more basic and focussed on reforms for tariff reduction and across-the-border measures. This is reflective of the aspirations of its constituents, which are primarily developing countries. The TPP is a more ambitious plan, including market access for goods and services as well as regulations on labour, the environment, intellectual property and state-owned companies.

India’s primary concerns are three-fold – high current  trade deficit with RCEP nations, presence of China in the group and the experience of past FTAs. This blog analyses India’s concerns and the possible roadmap for its trade policy post the RCEP exit.

Source: ITC Trade Map; figures in US$ million; for products exported during 2019

The (lack of) trade equilibrium

Trends between India and RCEP countries show that the former’s trade deficit with RCEP nations for India has nearly doubled from US$ 51.1 billion in 2010 to US$ 101.5 billion in 2019. Around half of this deficit is accounted for by China (US$ 51.2 billion) followed by Republic of Korea (US$ 11.44 billion) and Indonesia (US$ 11.28 billion). India has a trade surplus with only 4 countries – Philippines, Myanmar, Cambodia and Laos.

The prospects of a higher influx in imports post signing the RCEP is a matter of concern for policymakers, especially in sensitive sectors like dairy, agriculture, etc. But a converse logic is that this could be loss making for products where India is indeed managing to show competitiveness. 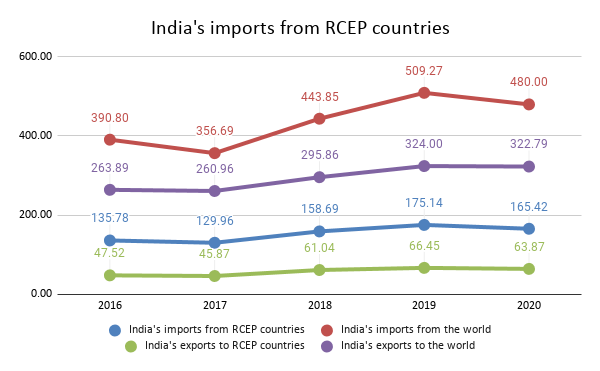 We did a preliminary analysis of this to see how India performs in terms of its top 15 exported categories to RCEP at the two-digit level. Even in these products, the trade deficit is still quite high at US$ 70.92 billion. India has a positive balance of trade in products like fish and crustaceans (US$ 2.4 billion), meat & edible meat (US$ 2.2 billion); ores, slag and ash (US$ 1.76 billion), cotton (US$ 1.75 billion) and correspondingly much higher deficit in categories like electrical machinery and equipment (US$ 30.53 billion); machinery, mechanical appliances, et al (US$ 20.7 billion); mineral fuels, et al (US$ 12.1 billion); organic chemicals (US$ 6.5 billion) and plastics & articles thereof (US$ 6.2 billion). This does not paint a positive picture on the trade deficit, if India had to commit to reduce tariffs on a wide range of items.

The new tariff regime will take kick in for RCEP members by 2022, and see tariffs come down to 2014, with duties to come down to 2014 levels. Tariff reductions are expected on 90-93% of tariff lines post India’s exit. To illustrate, simple average of import tariffs of China in 2014, was 9.4%, which would be lowered to 1.2% by the 10th year of implementation of the agreement for Australia and all ASEAN member states. Also by the 10th year, about 90% of the products that China would import from them would attract tariffs of 5% on less, while less than 4% of the products figure in the exclusion list.

India pitched for auto trigger mechanism, specific tariff schedules, and stricter rules of origin, which did not gain consensus among other members. Neither were they willing to accommodate India’s demands for mode 4 access to its service professionals. CATR’s own assessment had pegged the import surge post-RCEP to around US$ 30 billion annually, implying a loss at around 1.3% of GDP. Exports, correspondingly are estimated to rise by only around US$ 5.5 billion annually.

India has expressed its intent to accelerate the closure of trade agreements with markets like US and Europe, where it has greater complementarity. But at the same time, it is not possible to ignore the presence of the mega regional RCEP bloc in its backyard. Moreover, while provisions currently covered by RCEP are a work in progress, it is indeed an opportunity to shape the dialogue of trade in a scenario where the WTO is increasingly ineffective at framing a global consensus on trade. The RCEP includes issues that are either included in the covered agreements of the World Trade Organization (WTO), or are being viewed as the next level of reforms like electronic commerce, investment facilitation and an enabling environment for the participation of small and medium enterprises in global trade.

While the trade concerns are difficult to ignore at present, it is of critical importance for India to connect to the value chains of markets in the RCEP region. A major benefit for RCEP members is the common certificate of origin for the entire bloc. This will greatly facilitate the companies within the bloc and encourage investments by MNCs in supply chains across the region. This means that for MNCs looking to invest in Asia Pacific, RCEP can come across as a much more attractive investment destination to locate large parts of their value chains. Prof Amita Batra, Jawaharlal Nehru University, comments:

The complementarity remains as far as nations in East and Southeast Asia are concerned (even without India) – intra-regional trade remains among the highest. I think RCEP is going to provide a fillip to this regional production network, because it is going to give external investors preferential access to a large market with similar or uniform rules of origin. That will be a huge advantage to any investor in this region.

In a column last year, she also elaborated at length on how Factory Asia (ASEAN + China) has emerged as one of the most dynamic production hubs of the world showing increase in both inter-regional and intra-regional trade. But data indicates that India’s GVC integration is quite low as compared to G-20 countries. The column illustrates how India’s contribution to value addition contributed by East and Southeast Asian nations is just a fourth of Vietnam and 3% of the entire ASEAN region. But India also has an inherent opportunity, as China’s centrality to global manufacturing is slated to progressively come down in the post-COVID era.

So while India is unable to understandably consider RCEP in the immediate future, there are two key policy imperatives for it in the coming years. The first is to continue making improvements towards ease of doing business within its boundaries to retain its relative attractiveness as an investment destination. The second is to improve competitiveness and fast track value chain integration with the regions in its immediate vicinity, starting of course with the ASEAN where it is in the process of reviewing its trade agreement.

Similarly, it needs to explore more focused and specific agreements with other RCEP countries (with the exception of China, considering the current complications). While India offers its market attractiveness on one hand, it can leverage the opportunity to integrate with value chains of its close trade partners, negotiate for technology transfer and upgrade its manufacturing ecosystem.

An instance of this is mobile handsets, where India has managed to take up some share of the manufacturing ecosystem, despite having a virtually non-existent manufacturing capability till a few years back. This year, the country is on track to post record smartphone exports of US$ 1.5 billion, wherein 12.8 million mobile phones were exported during January-September, 2020. Samsung itself accounted for 11.6 million units, giving a successful template for an MNC in India, and vice versa for India’s efforts to be self-reliant and attract investments in the sector. This is the kind of win-win trade and investment relationship India can explore with RCEP countries in focus sectors. The exit from RCEP may seem like a pushback from India’s Act East policy, but it could actually lay the foundations of a new beginning.