India-Indonesia trade: Time for a strong expression of intent

India and Indonesia plan to double bilateral trade by 2025. But removal of import barriers on key products & ensuring a level playing field for Indian exporters in the Indonesian market will be key to achieve these goals. 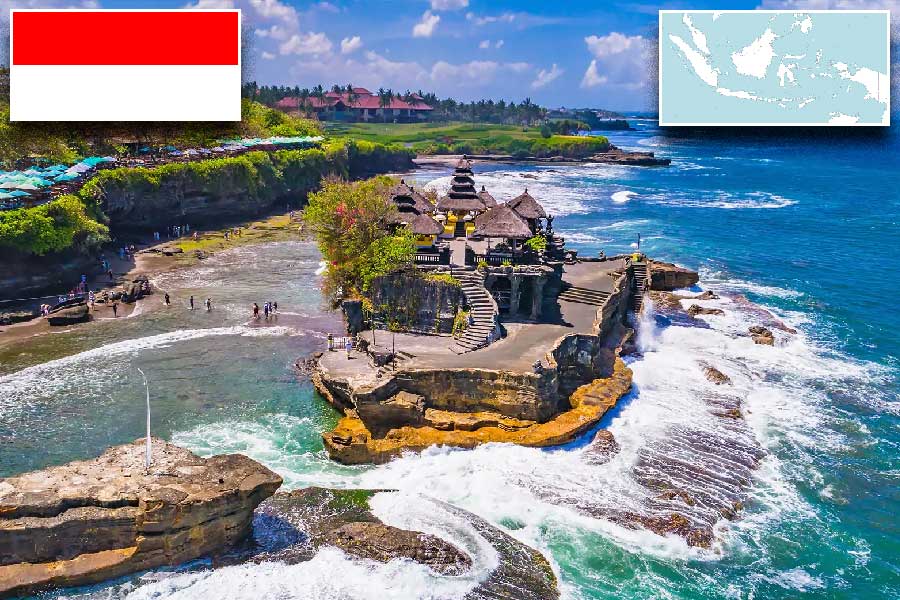 Indonesia is a Southeast Asian country situated between the Indian Ocean and the Pacific Ocean. In terms of land area, Indonesia is the 15th largest country in the world and is home to a diverse set of cultures with people speaking different languages and following different religions. It is a part of many intergovernmental organisations and international forums including the United Nations, World Trade Organization, International Monetary Fund, Association of Southeast Asian Nations, East Asian Summit and G20. 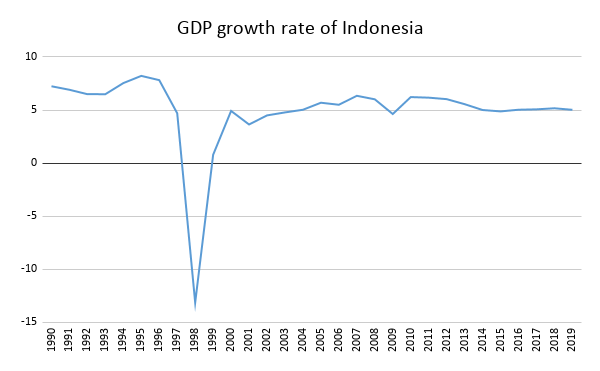 Since the Asian Financial Crisis in 1997, Indonesia has experienced a stable growth in GDP. The annual growth rate of GDP has fluctuated at around 5% between 2016 and 2019. Furthermore, World Bank reports that due to strong growth of the economy since the Asian Financial Crisis, Indonesia has also experienced a significant reduction in poverty –  from 24% in 1999 to 9.7% in 2018. This growth of the economy is attributed to coordinated and sensible macroeconomic policies. The World Bank reports that growth of the economy has remained stable despite the net outflow of foreign direct investment (FDI) in 2018. 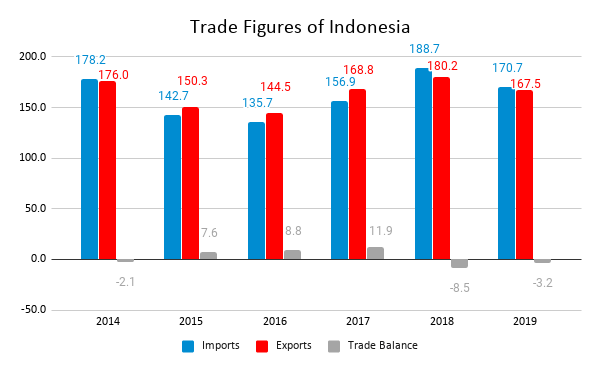 The trade performance of Indonesia shows a deficit in recent years. The total value of exports in 2019 was recorded at US$ 167.49 billion. The country’s top exported products include mineral fuels and oils (20.73%), products of animal fats and oils (10.52%), electrical machinery and equipment (5.09%), vehicles and accessories (4.87%), and iron and steel (4.43%). Furthermore, the top export destinations for Indonesia are China, the US, Japan, Singapore, India, and Malaysia.

Total value of imports of Indonesia in 2019 amounted to US$ 170.73 billion. The top products that the country imports are machinery, mechanical appliances, nuclear reactor, and boilers with a net share of 15.69% in total imports. Other major products are mineral fuels and oils and their products (13.75%), electrical machinery and equipment (11.58%), iron and steel (6.09%), and plastics and articles (5.12%). Also, the top countries which export to Indonesia are China, Singapore, Japan, Thailand, the US and South Korea.

In the COVID-19 pandemic scenario, Indonesia is expected to see contraction in the economic growth. In particular, Indonesia’s economic growth in 2020 is projected to range between -1.7% and -0.6%. Household consumption for the 3rd quarter is expected to contract between 3% and 1.5%. This would have a significant impact, since household consumption accounts for more than 50% of the GDP in Indonesia. In August 2020, exports experienced a decline of 8.36% YoY, whereas imports dropped by 24.19%. In Indonesia, there is a slowdown in the production. Logistics and transportation are facing difficulties and distribution channels have been blocked.

Indian companies such as Wipro, SBI, Bajaj, Royal Enfield and Tata Motors have fully owned subsidiaries in Indonesia. In healthcare sector, companies such as Macleods and Nephorplus have associated with Indonesian businesses to expand operations. Inflow of investment from Indonesia to India during April 2000 to March 2020 is estimated at US$ 638 million. Bank International Indonesia (BII) has setup its branch in Mumbai with invested capital of US$ 28 million. Similarly, other companies with presence in India includ Asian Paper & pulp (APP) and CP Prima.

India has a free trade agreement with the ASEAN countries known as AIFTA. The free trade agreement was finalized in 2009 and came into force on January 1, 2010. In 2019, India’s exports to Indonesia fell by 5.98% with total exports to Indonesia equal US$ 4.52 billion. India’s imports from Indonesia also experienced a similar fall in 2019, with the total imports at US$ 15.56 billion, which is a reduction of 3.32% in comparison to imports in the previous year.

As the tables indicate, the top exported product by India to Indonesia in 2019 was light-vessels, fire-floats, floating cranes and other vessels… followed by frozen boneless meat, P-Xylene and groundnuts. The major products that are imported by India from Indonesia include mineral fuels, chemical products, metal, iron and steel, palm oil, and floating structures. The top product imported by India from Indonesia in 2019 was coal with a share of 31.43% in India’s total imports of this product.

In 2018, on an official visit to Indonesia, Prime Minister of India Narendra Modi consulted with the President of Indonesia Mr. Joko Widodo regarding areas with the potential to deepen the bilateral relationship. Governments of both nations are looking to more than double bilateral trade by 2025. Indonesia has agreed to increase its imports of auto parts, sugar and buffalo meat. Based on an analysis of current market share, other potential products in which India can increase its exports to Indonesia are mineral oils and products, plastics and articles, cotton, residues, and waste from food industries, iron, and steel and machinery appliances. Similarly, Indonesia can explore trade expansion in organic chemicals, mineral fuels and oils

Furthermore, there are possibilities to increase trade by reducing non-tariff barriers. As Piyush Goyal, Minister of Commerce and Industry suggested, the auto industry’s products of India face quota restrictions. Also, it takes a significantly long time to register for the new vehicles. The same is true for buffalo meat, which has great potential in the Indonesian market, also faces import restrictions.

During the 17th ASEAN-India Economic Ministers Consultations on August 29, trade ministers of both sides have agreed to initiate discussions to review the scope of the AIFTA. India has raised two key points of concern – that the agreement has denied its exporters a level playing field in the ASEAN region; and secondly, China has taken unfair advantage of the AIFTA due to weak rules of origin. An instance of this is Indonesia itself, which has lowered customs duties on just 50% of India’s exports, while India has lowered duties on 75% of Indonesian products. Addressing these imbalances in the FTA will be key to drive the relationship forward as per the stated goals of both regions.

Ηi, I think your blog might be haνing browser compatibility issues.
When I look at ʏour blog site in Safari, it looks fіne but when opening in Internet Exрlorer, it has some overlappіng.

I just wanted to give you a quick heads up! Other then that,
amazing blog!

Enquiry for India-Indonesia trade: Time for a strong expression of intent