After an eight-year hiatus, India and the European Union have relaunched talks on trade and investment issues. The scope of India-EU partnership goes much beyond trade & commerce to cover digital, energy, transport and people-to-people connectivity. 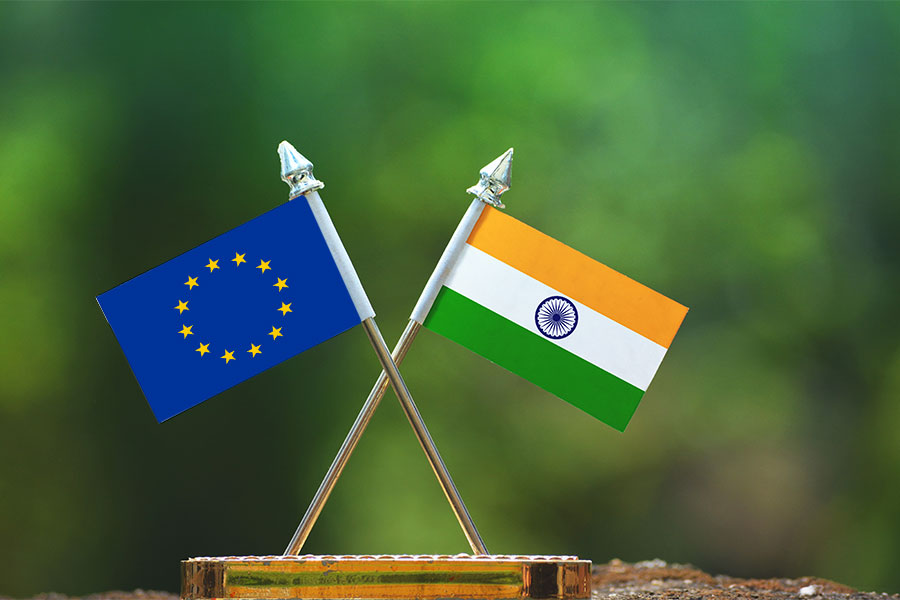 A new chapter is set to unfold in the history of India-European Union economic relations. The adoption of the EU Strategy for Cooperation in the Indo-Pacific in April this year implies deeper engagement between India and the EU as India is an important actor in the geopolitical framework. Secondly, the collective decision to relaunch trade talks at the recently concluded India-EU Leaders meeting is expected to give a fillip to the bilateral economic relations.

India and EU began negotiations on a Broad-based Trade and Investment Agreement (BTIA) first in 2007. However, the negotiations came to a halt in 2013 over a number of differences. Although dialogue continued in the subsequent years, yet it is only now that India and EU have decided to resume negotiations for a balanced, ambitious, comprehensive and mutually beneficial trade agreement. They will also be launching negotiations for two separate agreements on investment protection and geographical indications.

The European Union is India’s largest trading partner globally, while India is EU’s tenth largest trading partner for merchandise trade. India’s trade with the EU accounts for about 11% of its total trade with the world. In 2019-20, the bilateral trade stood at US$ 90 billion, of which India’s exports to and imports from EU were at US$ 44.9 billion and US$ 45 billion, respectively. Trade between India and the EU has witnessed a lackluster performance, hovering around the US$ 90 billion figure since a decade (Figure 1). 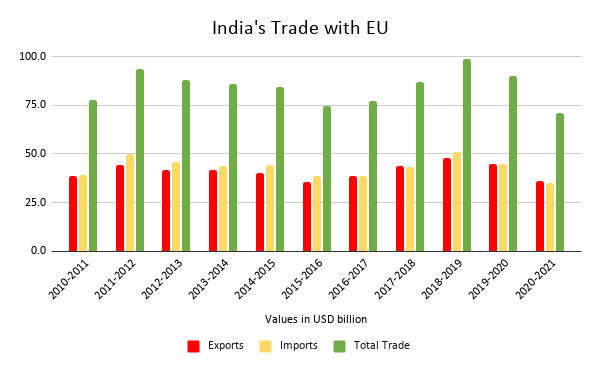 Within the EU, Germany is India’s most important trade partner, accounting for almost a quarter of India’s trade with the grouping. The other top trade partners are Belgium (16%), Netherlands (13%), France (13%), Italy (11%) and Spain (6%).

Coming to the composition of trade, in 2019-20, product categories having the largest share in India’s export basket were petroleum oils; organic chemicals; machinery and mechanical appliances; gems and jewellery; electrical machinery; and apparels. It is worth noting here that about 13% of the total exports to the EU were of the commodity “other petroleum oils and oils obtained from bituminous minerals’ (HS 271019) alone. As regards India’s import basket from the EU, the top products are machinery and mechanical appliances; diamonds; aircrafts; electrical machinery; and instruments used for optical, photographic, checking precision, medical and surgical purposes.

Trade in services between India and the EU is gaining increasing importance in their economic ties. Particularly for India, EU is an important export destination, accounting for more than 25% of its total service exports. India is a net exporter of services to the EU. In 2019, India exported services worth € 17.7 billion (US$ 21.5 billion) to the EU and imported € 14.8 billion (US$ 18 billion) worth of services, thereby running a trade surplus of € 2.9 billion with the grouping.

Similar to the case of merchandise trade, India’s top trading partners in the EU in services are Germany, Netherlands, France, Sweden, Belgium, Italy, Ireland and Finland. Globally, Germany was India’s top destination for exports of transport and logistics services, Netherlands for engineering and construction services and France for maintenance and repair services.

In 2019, other business services, which include research and development, legal, accounting, management consulting, technical and trade-related services was the largest exported service category by India to the EU, running a huge positive trade balance. The other top exported categories were telecommunications, computer and information; transport; and travel. Coming to imports from the EU, the top service categories were telecommunication, computer and information followed by transport; other business services; travel; and charges for the use of intellectual property.

A study[3] estimates that a Free Trade Agreement between India and EU in goods and services would lead to additional gains in the range of € 8 billion (US$9.72 billion) to € 8.5 billion (US$10.32 billion) for both the EU and India. So, what has kept India and EU from realising these gains?

The landmark decisions taken at the India-EU Leader’s meeting, held this month, demonstrate that India-EU’s partnership is stronger than ever. These include revival of talks on the trade agreement, launching of negotiations on investment protection and GIs agreements, creating joint working groups to intensify regulatory cooperation on goods and services and on resilient supply chains and setting up an India-EU Senior Officials’ Dialogue for bilateral cooperation on WTO issues. They also formally launched the sustainable and comprehensive Connectivity Partnership envisioned in Roadmap 2025. Earlier this year, the first EU-India Dialogue on IPR was held too and an IPR SME Helpdesk was launched.

India and EU’s partnership stands apart owing to its unwavering commitment to a rules-based, multilateral system that is governed by dynamic institutions and abides by the principles of “democracy, freedom, rule of law and respect for human rights”. The EU and India, in their negotiations have laid great emphasis on the bilateral trade and investment agreements being balanced, mutually beneficial and ensuring a level playing field on both sides.

To achieve this, both sides will have to let their guard down. Several studies have concluded that although India will gain from the FTA in services sector, the prospects seem bleak in goods sector. The approach here should be to focus on the total net gains and not see it as a zero-sum game. Therefore, India should reduce its tariffs on merchandise exports from the EU in return of greater access to EU’s service markets.

The CAMM framework has set out impressive goals such as promoting migration of highly skilled workers for fostering innovation, efficient grant of visas and working towards recognition of foreign qualifications. However, despite five rounds of India-EU High Level Dialogue on Migration and Mobility, nothing substantial has happened on the ground. To enhance trade in services, it is essential to intensify discussions in this forum. Market access and SPS and TBT related issues also need to be aggressively pursued to reach a breakthrough.

An influx of EU investments into India and other collaborations would result in huge positive externalities besides the obvious benefits of knowledge and information transfers. It is thus important for India to continue to reform its IPR protection and enforcement regime, its digital sector and the related data protection laws.

With the second wave of Coronavirus hitting India hard, making rapid strides in the partnership is all the more important for a faster recovery. The partnership will also play an instrumental role in ensuring peace and prosperity in the Asia Pacific.