The onset of COVID-19 has exposed the perils of an overdependence on Chinese manufacturing to nations and corporations across borders. This is being viewed as an invaluable opportunity for other nations to emerge as alternate manufacturing destinations. India Business & Trade takes a look at the current dynamics of global manufacturing, India’s standing & strengths and more critically, the concern areas it needs to address. 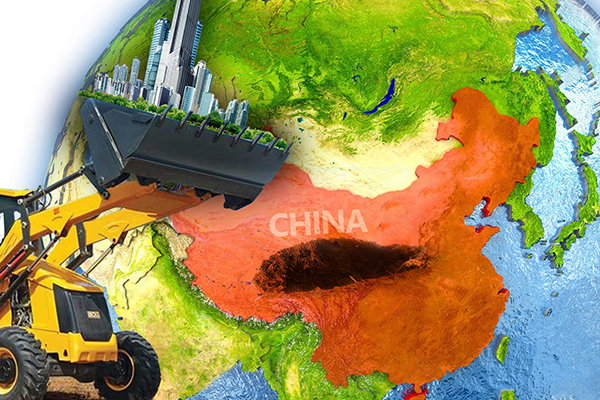 Offshoring of manufacturing has been an ongoing phenomenon since World War 2, driven by the growing consumer markets in Europe and low cost of labour in Asia. In the early 1950s, the US accounted for 40% of the world’s manufactured goods. Over time, Europe, Japan and then east-Asian countries (including South Korea) started becoming more and more prominent in worldwide manufacturing.

Factory of the world

China has taken up an increasing share of global manufacturing from developed nations since the 1970s, but particularly between 2000 and 2018, it has taken an unparalleled leap. This has brought it to a virtually unchallenged position as the world’s manufacturing hub. During this period, China’s exports have grown five-fold to US$ 1.2 trillion, with world manufacturing share increasing from 3.9% to 28.4%.

One of the most significant hard truths that the COVID-19 crisis in China has exposed is the world’s overwhelming dependence on China for its manufacturing supply chains. While the world is now gaining conviction on the idea of de-risking from China, the Middle Kingdom (what Chinese call themselves – meaning that they believe themselves to be the centre of the world) has well entrenched advantages as a manufacturing destination that are tough to emulate – be it number of skilled workers, deep supplier networks, highly developed infrastructure, growing dominance of technology ecosystem or deep state support. Time and again, India has been positioned as a possible counterweight to China, and also as the country that’s best-placed to match the latter’s scale when it comes to manufacturing.

Can’t live with Chinese manufacturing (or without!)

The data illustrates the most affected economies from a reduction in Chinese supply of intermediate inputs. This has a significant impact on their productive capacity and exports. An instance of this is the automotive industry, wherein players in Europe are expected to face a shortage of critical components for their operations. As UNCTAD’s analysis indicates, the most affected economies overall are the European Union (machinery, automotive, and chemicals), the United States (machinery, automotive, and precision instruments), Japan (machinery and automotive), the Republic of Korea (machinery and  communication equipment), Taiwan Province of China (communication equipment and office machinery) and Vietnam (communication equipment).

Competitiveness – a need for speed

India was ranked 68 in the World Economic Forum’s Global Competitiveness Index 2019, which is a drop by 10 places. The WEF report highlights that this is less due to a decline in scores, and more due to rapid improvements by other nations. This report is a ready reckoner on country performances vis-à-vis 12 pillars of productivity: Institutions; Infrastructure; ICT adoption; Macroeconomic stability; Health; Skills; Product market; Labour market; Financial system; Market size; Business dynamism; and Innovation capability

Last year, base corporate tax for existing companies has been brought down to 22% from 30%, and to 15% from 25% for new manufacturing firms incorporated after October 1, 2019, provided they start operations before March 31, 2023. This makes India more lucrative on taxation in comparison to competing countries like China, Taiwan, Vietnam and Philippines for new manufacturing investment. 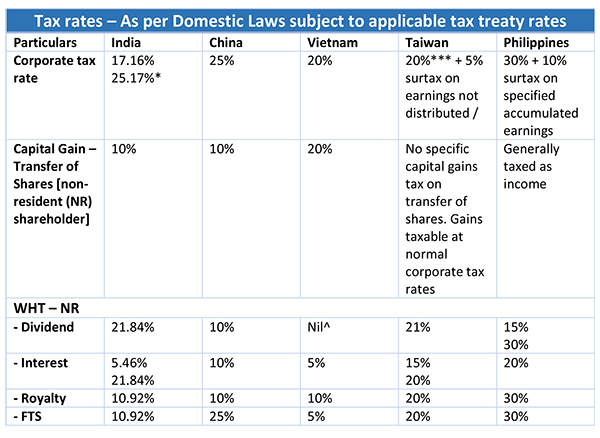 Besides this, India has taken a number of initiatives in the realm of cash optimisation measures in Indirect Tax. This includes:

• Deferment of Duty on import of Capital Goods and Raw Material

India falls behind many of its competitors in Asia with regard to factors used by the World Economic Forum use to rank countries in their human capital report. India has been given a rank of 115 in the World Development Report 2019 with a score of 0.44 on a scale of 0 to 1, lower than even the levels for South Asia. This means a child born in India today will be 44% as productive as he/she could be if he/she got complete education and health. The Government of India has officially questioned this report, citing data gaps and methodological weaknesses.

Table 2 Comparison of India on various parameters with competing countries

India makes for a highly viable alternative in terms of labour force, at around 519 million compared to China at 783 million. Indonesia comes a distant third in Asia with a labour force of 134 million. However, India needs to evolve in terms of know-how (breadth and depth of skills at work) and labour development (access to and enrollment in formal education, opportunities to upskill and how well the education system fits the needs of a competitive economy).

When compared to the top five manufacturing destinations across the globe, India has a lot of ground to cover across parameters like customs, infrastructure, international shipments, logistics, tracking and tracing and timelines, as measured in the World Bank Logistics Performance Index 2018. On the other hand, India compares favourably with respect to lower-middle income countries like Indonesia (46) and Vietnam (39).

The government has rightly taken up logistics as a high priority reform and appointed a Special Secretary (Logistics) to look into coordination and cross-cutting policies. In 2018, India has also launched a sub-national Logistics Performance Indicator on lines of the World Bank. Improvement in logistics has to take a top down approach right to the grassroots. India has taken up some impressive projects such as Sagarmala, and investment attractiveness will be considerably dependent on the success of these projects.

India has made tremendous progress on World Bank’s Ease of Doing Business between 2014 to 2019, improving its rank from 142 to 63. In 2019, it figured among the top ten improved countries for the third consecutive time. Among other improvements, the process of obtaining a building permit is now more efficient. The same goes for permits and authorizations to build a warehouse, which costs 4% of the warehouse value, as compared to 5.7% the previous year. The modern Insolvency Law enacted in 2016 was a major positive change by the government, which has led to  a rise in the number of reorganisations.

Starting a business is less expensive due to abolished filing fees for the SPICe company incorporation form, electronic memorandum of association and articles of association. In addition, authorities have improved building quality control in Delhi by strengthening professional certification requirements. Importing and exporting has also become simpler with the creation of a single electronic platform, upgrades to port infrastructure and improvements to electronic submission of documents.

Enquiry for India, COVID-19, and the grand manufacturing exodus