India was the largest exporter to Bangladesh initially, but has been replaced by China over the years. Both Bangladesh and India need to work on collaborative mechanisms to boost their trade relations in potential sectors like automobiles, pharma, food and agri, textiles, technology, medical services and education. 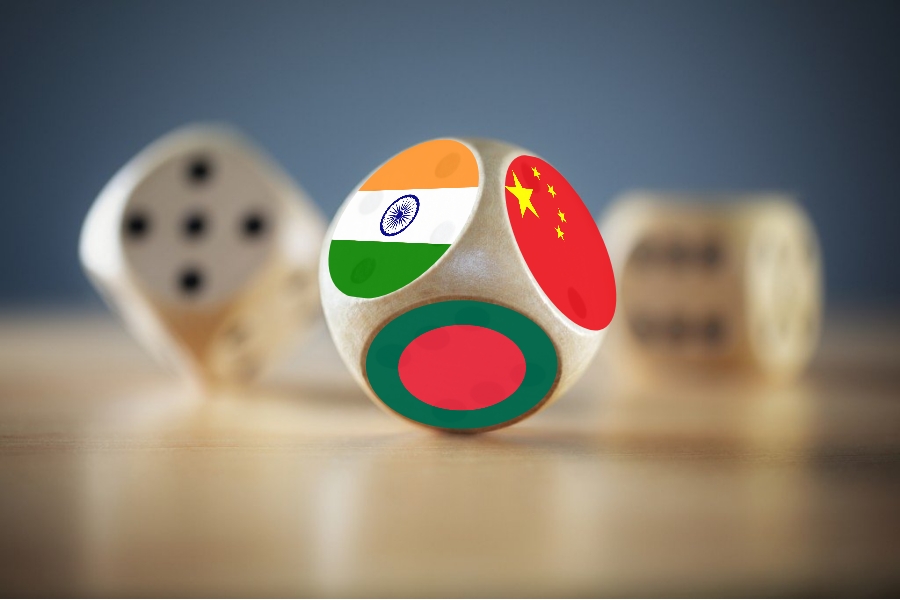 On 26th March 2021, Bangladesh celebrated 50 years of independence and India’s Prime Minister was invited as the Chief Guest to grace the occasion and address the country. This was PM Modi’s first international visit after the  pandemic caught India in its grip. Bangladesh’s initiative of inviting the Indian Prime Minister is definitely a strong signal of diplomacy and robust foreign relation at a global platform between the two nations. It is well known that India in 1971 played a key role in Bangladesh’s independence, due to which the latter has always regarded India as one of its most amenable and close allies.

What is also crucial to assess is the health of trade relations between India and Bangladesh. The two countries have been members of some old trade agreements like SAPTA (SAARC Preferential Trade Agreement), which was later converted into SAFTA (South Asian Free Trade Area) and BIMSTEC (Bay of Bengal Initiative of Multi-Sectoral Technical and Economic Cooperation).

Import trends of merchandise goods by Bangladesh signal that India was the largest supplying partner for the latter initially. But over the years, China has emerged as the leading supplier. Bangladesh imports 30% (US$ 17.33 billion) from China and 14.3% (US$ 8.27 billion) of its total imports from India. This is largely due to China’s burgeoning exports of products from industries such as textiles, footwear and head wear, machinery and mechanical appliances. This has impacted India, as it also enjoys a comparative advantage for a similar product structure. 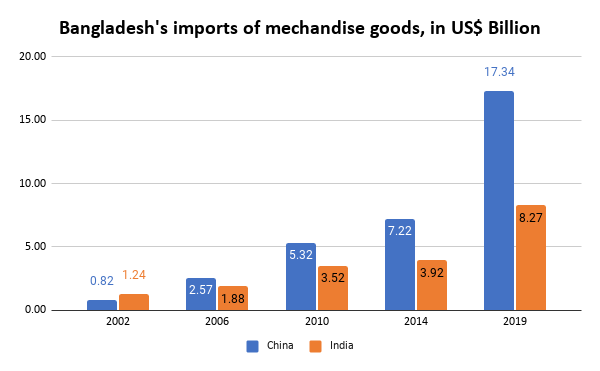 To put things into perspective, there is no separate regional trade agreement between China and Bangladesh, except for couple of accessions, which India is also a part of. Despite this fact, China offers zero duty on more than 97% of tariff lines to Bangladesh. Practically, with this kind of trade relationship, Bangladesh does not need to sign any trade agreement with China in the future, though the United Nations has recommended  it to do so.

Ironing out the differences

Given the similarity in the export baskets of China and India to Bangladesh, Chinese exports have already replicated Indian exports at a large scale. According to Bangladeshi trade stakeholders, infrastructure connectivity in terms of sea trade from China is much more efficient and takes lesser time as compared to importing from India.

They also claim that India applies more non-tariff measures, which are more burdensome than China’s NTBs. According to a study done by ITC (International Trade Centre), Bangladesh faces 148 NTMs by SAARC nations and India applies the maximum of them (72 out of 148), broadly under pre-shipment inspections and SPS (sanitary and phyto sanitary measures). But the same study also argued that to stop illegal trade between India and Bangladesh, India’s NTMs are little stringent.

During the pandemic period, India stood firmly with Bangladesh as a strong neighbouring country, supporting their food requirements by exporting primary agriculture cereals worth of US$ 555.36 million between April 2020 and January 2021. Just to highlight, in the previous year, it exported only US$ 40.6 million worth of primary agriculture cereals.

During previous series of Indusfood, TPCI’s flagship annual food and beverage export promotion event, delegates from Bangladesh have clearly pointed that they want India’s help and guidance on growing market access, value addition and technology transfer for the agro food processing sector as they currently lack these technologies, which India can support at competitive price.

There are several dominions where India and Bangladesh can work mutually for common benefits like, automobiles, pharma, food and agri, textiles, technology, medical services, education to name a few. India’s Northeastern states can be hubs to work on these sectors and bolster trade figures. But for this, Bangladesh needs to reciprocate in ways that ensure a win-win relationship.

To begin with, they can give Indian exporters permission to use Bangladeshi ports to access markets of East Asian countries directly. For example, Bangladesh is exporting processed Indian Naga Chili to Japan, which India can directly export. To frame mutually benefiting trade policies, the two countries need to work in a constructive direction towards setting up some common NTMs, testing labs, shipment clearance windows etc to buttress bilateral trade.

Enquiry for India-Bangladesh trade, and the tricky Chinese connect