• Commerce Minister Shri Suresh Prabhu has proposed that India and Africa collaborate for a free trade agreement/preferential trade agreement.
• India-Africa trade has grown rapidly from US$ 4.46 billion in 2000-01 to US$ 63 billion in 2017-18.
• The bilateral trade is considered to be significantly below potential, and a number of possible avenues for trade expansion remain untapped.
• As growing economies, India and Africa need to identify and explore mutual synergies, and bring down barriers to bilateral trade.

During his address at the 14th CII-EXIM Bank Conclave on India-Africa Project Partnership, Commerce Minister Shri Suresh Prabhu proposed that India and Africa should consider finalizing a free trade agreement (FTA) or a preferential trade agreement (PTA). He stated, “We have a common future. We do not want to do anything at the expense of Africa. We want you to get into an FTA (with India) that will benefit Africa first.” He identified digital connectivity, logistics, agriculture & food processing, power projects, new and renewable energy and skill development as some of the key areas for deeper India-Africa bilateral cooperation and partnerships.

Commerce Secretary Shri Anup Wadhawan informed the audience that the Government of India is presently laying the groundwork for a strategy for growing India-Africa trade. Both economies are exhibiting robust growth momentum. While India is recording growth rates of over 7%, Africa’s GDP is projected to grow to US$ 29 trillion by 2050 from US$ 2 trillion in 2017. With the current growth trends, most African nations are projected to reach middle-income status by 2025.

Mr Wadhawan commented during his address, “It is extremely heartening to see that both India and several African countries have maintained high economic growth rate over the last two decades and today even as the global economy is faced with several debilitating trends, our two regions are seen as bright spots on the world map.”

Trade between India and Africa has grown by around fourteen times from US$ 4.46 billion in 2000-01 to US$ 63 billion in 2017-18. Top Indian items of export for 2017-18 were petroleum products (US$ 4.09 billion), pharmaceutical products (US$ 2.9 billion), vehicles, parts and accessories thereof (apart from railway or tramway rolling stock, US$ 2.69 billion), cereals (US$ 1.78 billion) and nuclear reactors, boilers, machinery and mechanical appliances; parts thereof (US$ 1.65 billion). 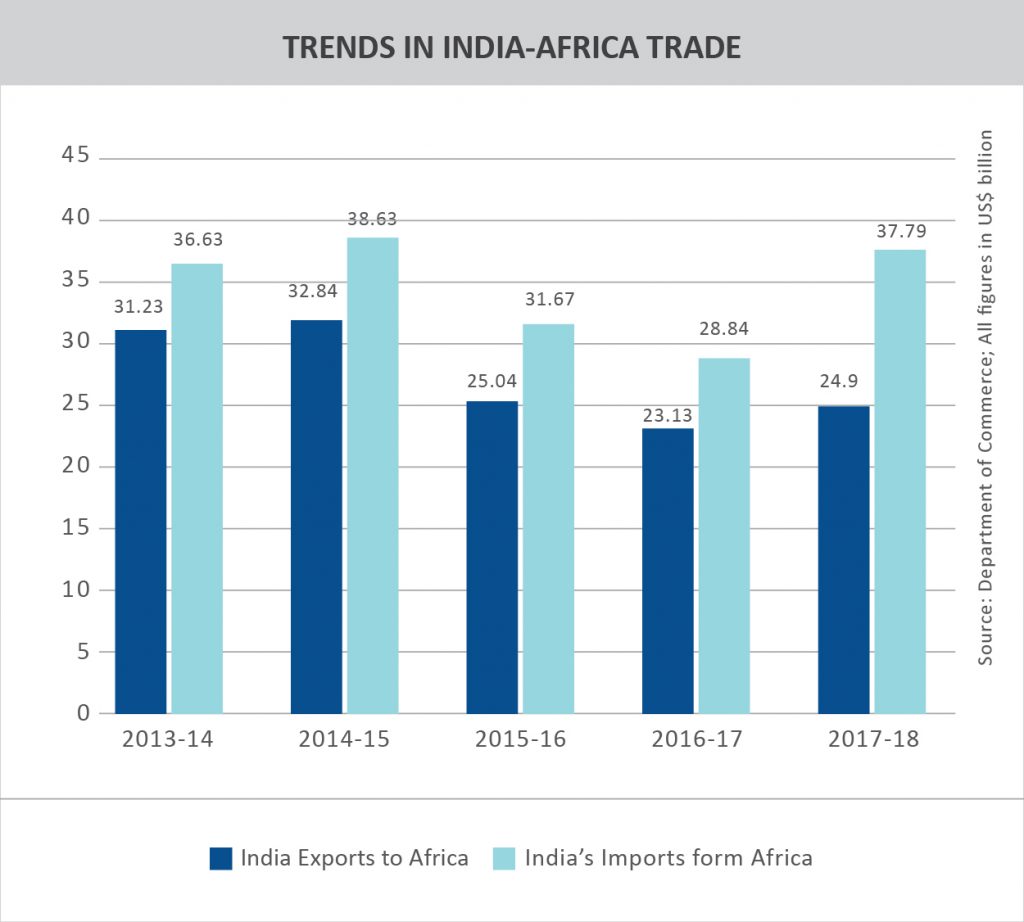 On the other hand, petroleum products (US$ 20.76 billion) dominated India’s imports from Africa in 2017-18. They are followed by gems & jewellery, edible fruits & nuts, inorganic chemicals, ores and copper.

Indian companies have also made significant investments into Africa in the recent past. These investments have been largely directed towards construction, telecommunications, power, computer services, energy, infrastructure and automotive sectors. According to the UNCTAD World Investment Report, 2018, FDI stock by India into Africa stood at US$ 16 billion in 2016 compared to US$ 14 billion in 2011. Some of the major public and private sector companies that have made investments into Africa include ONGC Videsh, Reliance, Bharti Airtel, Varun Beverages Tata Group and Essar Group.

Nineteen trade agreements are currently in place between Indian and African nations. Besides this, negotiations are ongoing for a trade agreement with the Common Market for Eastern and Southern Africa (COMESA), a PTA with the South African Customs Union (SACU) and a Comprehensive Economic Co-operation Partnership Agreement (CECPA) with Mauritius. The Government of India has taken several strategic initiatives over the years to boost trade and investment like Focus Africa (2002) and India-Africa Forum Summit (2008).

Compelling arguments for a deeper partnership

A joint report by African Export-Import Bank (Afrexim Bank) and the Export-Import Bank of India (Exim India) published in 2018 concluded that there are a number of avenues for trade expansion between the two trading partners, based on their respective competencies.

Using an export potential assessment methodology developed by the International Trade Centre, the report identifies rice (over US$ 5 billion), pharmaceutical products (US$ 4.2 billion), motor vehicles and parts (US$ 3.7 billion) and machinery (US$ 2.9 billion) as the products with the highest potential. The export potential of the top 25 products identified in this analysis is in excess of US$ 35.1 billion.

From Africa’s perspective, the top 25 products have an aggregate export potential of over US$ 7.3 billion. The list is led by nuts, followed by ferrous metals, wood and vegetable materials, and pulses. Some of the other major product groups are fertilizers, chemicals, plastics and leather products.

India faces issues of market for some products to Africa. On the other hand, many least developed countries (LDCs) in Africa have not been able to take advantage of the Duty Free Tariff Preference Scheme (DFTP) offered by India due to low awareness. The DFTP could be also extended to the entire African region to boost trade and investment.

The India-Africa trade relationship is extremely critical in the present milieu, with growing protectionist policies in traditional markets necessitating diversification of the trade basket. Moreover, as growing economies, both India and Africa need to explore potential for exploiting mutual synergies. Exports from Africa have the potential to evolve beyond crude oil and primary commodities to manufactured, non-traditional and agro-processed products. With India moving up the value chain on technology, exports of technology and IP-based products from India to Africa could also witness an increase in the coming years.

Enquiry for India-Africa – Partners in progress