Hydrogen Storage: The key to unlock a zero-carbon economy

Hydrogen is a game-changer when it comes to decarbonizing development. However, to emerge as a leader in the global hydrogen landscape, India needs to overcome few teething troubles pertaining to hydrogen storage, safety, and costs among others. Government-industry coordination is needed to lower the costs, improve performance, and develop advanced materials. 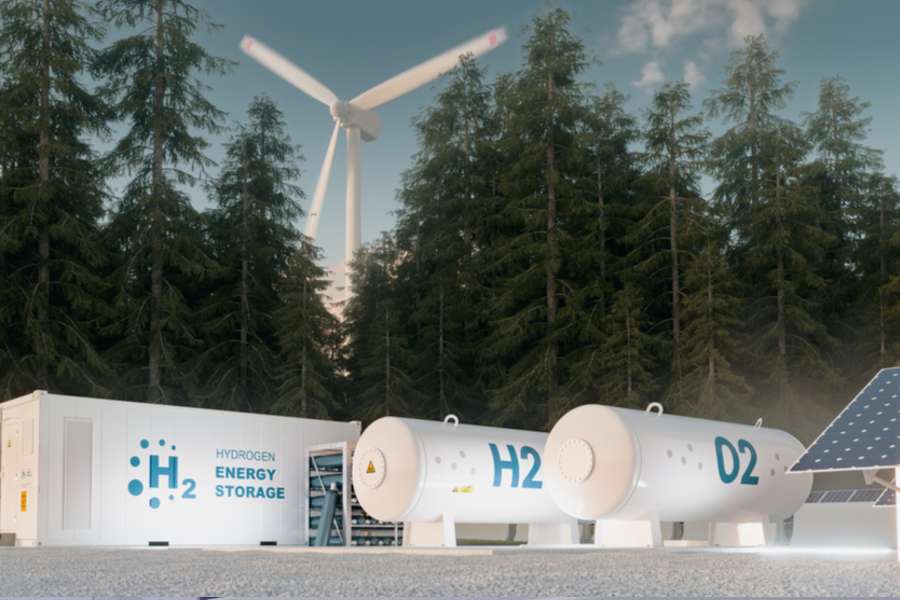 Climate change is one of the most critical challenges defining global growth in the 21st century. This has led to international collaboration to combat the threats posed by this man-made crisis through various initiatives. These include the landmark Paris Agreement, which compelled nations to cut carbon dioxide emissions through Nationally Determined Contribution (NDC).

Consequently, the EU has proposed a carbon border tax and the US is toying with the notion of polluter import fees. India, the planet’s third-largest emitter of carbon dioxide, too, is working to fulfill its NDC. In this direction, the government recently announced the National Hydrogen Mission (NHM). It aspires to make India the global leader in production and exports of green hydrogen. The government has also announced PLI incentives for hydrogen fuel cell vehicles. It is mulling a proposal to make it mandatory for user industries to produce or procure green hydrogen. Umesh Sahdev, Hydrogenium Resources Pvt. Ltd comments:

India has a high potential for large investments in hydrogen infrastructure, supply chain and entire spectrum of mobile and stationery applications. The Indian Government announced the ambitious Hydrogen mission. It made a recent announcement to provide viability gap funding (VGF) for green hydrogen in heavy mobility. Similarly, it plans to implement the Green Hydrogen Consumption Obligation (GHCO) in fertilizer production and petroleum refining. Thus, the government has shown its real intent to support hydrogen as a key driver to its net zero transition.

Hydrogen economy: The all in one solution

Produced from renewable energy, ‘green hydrogen’ can be obtained from numerous sources at any time. Presently, global hydrogen production is 48% from natural gas, 30% from oil, 18% from coal and 4% from water electrolysis. Similarly, ‘blue hydrogen’ can be manufactured from fossil fuels with carbon capture and storage. Therefore, both blue/green hydrogen can play an integral role in curtailing the country’s carbon dioxide emissions and improving air quality. Hydrogen is the lightest and most abundant element in the universe. This zero-carbon emissions fuel has multiple applications – space exploration, mobility, making fertilizers, steel, aluminum, mining, power generation, and electronics.

A transition to the hydrogen economy would also be a great financial decision for India. Potentially, hydrogen can save over US$ 160 billion worth of imports for India. It would save US$ 112 billion on crude, US$ 9.6 billion on natural gas/LNG, US$ 23.6 billion on coal, US$ 16.2 billion on petroleum products and US$ 775 million on ammonia. Dr. JP Gupta, Chairman, Environmental Impact Assessment, Ministry of Environment, Forests & Climate Change, Govt of India elucidates:

The rapidly declining cost of renewable has been a motivation for the growing interest in green hydrogen. Hydrogen is a new and viable alternative to fossil fuels, with a well-established market and a full value chain in place.

While the benefits of green/blue hydrogen are plenty, there are challenges pertaining to lack of adequate technology, storage, transportation, development of new materials, electrolysis, safety standards and regulatory regime. This article focuses on the storage challenges associated with it.

Roadblocks to a hydrogen economy

Hydrogen storage refers to the type of technology that is used for the enhancement and advancement of technology in applications including, stationary power, portable power, and transportation. It can be stored in two forms, chemical (adsorbent, liquid organic, interstitial hydride, complex hydride and chemical hydrogen) and physical (- compressed gas, cold/cryo compressed and liquid hydrogen).

At present, there are a few problems associated with storing hydrogen. For example, w.r.t. the use of hydrogen for transportation, the overarching challenge is how to store the amount of hydrogen required for a conventional driving range (>300 miles) within the vehicular constraints of weight, volume, efficiency, safety, and cost. The weight and volume of hydrogen storage systems are presently too high, leading to inadequate vehicle range.

Further, life-cycle energy efficiency may not be optimum in chemical hydride storage. Materials and components used have a lifetime of 1,500 cycles and refueling times are too long. Also, hydrogen is very volatile and inflammable. Lastly, at present hydrogen technology is very expensive in the country, albeit the government is trying to bring them down through initiatives such as the PLI incentive for hydrogen fuel cell vehicles. Sturle Harald Pedersen, Chairman; Dr. Karen Landmark; Chair of Board of Directors, & Knut Linnerud, CEO, Greenstat Asia, opines that the key challenges to build a viable business proposition for hydrogen fuel in India include:

(a) Establishing R&D test centers in collaboration with commercial implementation of the hydrogen value chain;

(b) Developing national standards for safety regulations and policys, based on international best practices;

(d) Chalking out an international collaboration; and

(e) Replacing the consumption of grey hydrogen in the industry.

Bringing down the cost factor in a safe manner

Renewable energy, which was earlier dismissed as too erratic & expensive for scale economies, has now become the driving force behind green hydrogen. India, for example, has succeeded in attaining one of the world’s lowest costs of renewable energy.  Provided India has access to cost-effective technologies and process equipment as well as the right policy framework, the hydrogen ecosystem is an achieveable goal.

Centers of excellence can be crucial to the commercialization of the hydrogen ecosystem in the country. They can help the nation in not only attaining self-reliance in green hydrogen production, but also become its leading exporter. It can also collaborate with nations like Norway and Japan, that already have clusters of hydrogen companues as a knowledge partner. These can play a major role in directing research towards making this fuel lighter on the pockets of users.

As the cost of energy used to produce Green hydrogen is over 60 % of the total cost, India (due to its cheapest solar energy cost) is uniquely placed for hydrogen production and therefore India is expected to be a key investment destination for hydrogen players and could emerge as its leading exporter.

In terms of storage, the Ministry of New and Renewable Energy, further suggests that solid-state storage of hydrogen is safer and more efficient than pressurized or cryogenic storage of hydrogen. Also, liquid organic hydrides consisting of various cycloalkanes can conveniently be transported from one place to another and has a higher storage capacity of 60 kg/ m3. Lastly, hydrogen storage in hollow glass microspheres presents several advantages like a higher gravimetric energy density, safety, low energy consumption and cost-effectiveness.

A key player in the global hydrogen storage market

Driven by the rising industrial applications of hydrogen, the global hydrogen storage market is projected to grow from US$ 467.2 million in 2016 to US$ 1,011.2 million by 2026, at a CAGR of 8.0%. Globally, there are a few companies that have taken a lead in hydrogen storage & India could look up to them. For example, Enapter is a German startup that provides an energy management system to predict energy generation, storage, and transmission. Another global company that offers customized & innovative hydrogen storage solutions is Hexagon Agility. For example, it has designed cylinders keeping in mind safety, storage and efficiency. Similarly, HYON offers bespoke solutions ranging from producing hydrogen to storing and distributing it.

The potential future demand, coupled with the measures adopted by the Indian government to give a fillip to this sector has led to a number of major Indian companies announcing their ventures in this field. Thus, India’s largest company, Reliance Industries Ltd, Adani Group, Hydrogenium Resources Pvt. Ltd, and state-owned oil refiner Indian Oil Corporation and electricity producer NTPC – all are planning to swiftly embrace hydrogen as fuel. Foreign companies such as Kreston International and Norway’s Greenstat Asia have also started investing in the Indian companies in this industry. However, this technology is still in its infancy in India.

While most of these companies are making headlines in terms of hydrogen production, the nation lacks key players in the domain of storage, which is vital for applications like transportation. This is an important field that the industry must not neglect as the nation seeks to be self-reliant. Thus, for example, in terms of mobility application, currently there are no cars in India with multiple storage units up to 700 bars. Currently, only three brands in the world offer hydrogen-powered fuel cell vehicles— Toyota Mirai, Honda Clarity and Hyundai Nexo. This presents an opportunity for players in the industry to fill this void. Prof. C. P. Kaushik, Co-Chairman, Environment Committee, PHD Chamber of Commerce and Industry suggests:

PPP can help in establishing hydrogen ecosystem in the first instance. Attractiveness for green hydrogen may be enhanced by subsidizing the equipment, financial incentives, levying carbon tax after strengthening the supply chain, and spreading public awareness.

A good starting point would be for India to collaborate with international companies to get the process started before it can have solely indigenous companies in hydrogen storage. Establishing centres of excellence in companies and in the country to promote R&D in the field will be critical in establishing the value chain. At the same time, the government must continue supporting the sector through measures such as the VGF & PLI scheme. National, regional, and city governments can guide future expectations in the sector. Meanwhile, companies should also have clear long-term goals. Incentivizing the use of this fuel will also motivate these companies to invest in the sector.

Quite informative and thought provoking article.
For Solar energy, India took longer time to take off.
Hope we don’t repeat the mistake.

Enquiry for Hydrogen Storage: The key to unlock a zero-carbon economy