In this exclusive interaction with TPCI, Dr Amita Batra, Professor, Centre for South Asian Studies,  talks about the impact of tariff barriers on international trade, free trade, the threat to the WTO and how India can cope with the growing threat of protectionism.

Q: A recent WTO Report suggests that G20 members have imposed 20 new trade-restrictive measures between mid-October 2018 and mid-May 2019. Although these countries have adopted some trade facilitating measures too, trade restrictions among G20 members have been continuing at historic high levels. What are the major trade barriers, according to you, that are impacting growth in international trade?

Amita Batra (AB): The report very clearly states that it is the tariff barriers that are mainly and predominantly impacting international trade presently. But it doesn’t necessarily talk about higher non-tariff barriers as far as the trade scenario is concerned. The big thing is that in terms of the trade barriers having increased – as far as the US is concerned, plus other countries have also simultaneously raised their tariff barriers. So, the larger proportion of the total barriers impacting trade presently is basically in terms of higher tariffs.

Q: What are the likely repercussions of major events like the US-China tensions & Brexit on the world trade?

AB: As far as the world trade is concerned, the projections are for much lower rate of growth in 2019. Even the earlier growth projection of 3% has been revised by the WTO recently to about 2.6%. That’s less than the earlier predicted low rate of growth. So, the rate of growth of trade is lower, trade has slowed down and it is not expected to pick up till about 2020. Hence, the prognosis is of lower trade growth. In that, the US-China trade is going to further impact the slowdown; that’s one of the reasons for lower trade. But there is also the impact that we will see in terms of relocation of certain value chains and the interference with certain value chains on account of higher tariffs by the United States as well as the retaliatory tariffs by China. 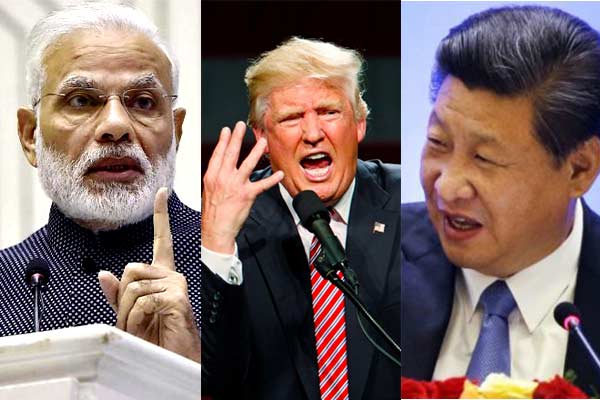 More recently, of course, things have changed, since we have seen the G-20 summit and the Joint statement coming out with a very positive outcome that US has agreed to put a halt to further increase in tariffs for now. But otherwise, there is the impact that trade is slower, the value chains interrupted will further slow down trade as well as growth for many companies. There will be a revisiting as far as many large corporations are concerned in terms of relocating some of their units & segments of production away from China to other countries. But how far will this go & how much these value chains will unravel to relocate elsewhere will happen over time, so we don’t know the full  impact as yet.

But one can take it for sure that this is happening & this will happen in the sense of interrupted value chains impacting trade patterns and volumes over time. But even now if the US & China are able to somehow or the other come to a positive deal, things may not go very far. The positive deal has repercussions, both in terms of trade & technology. The Huawei buying of technology is also linked with that. So, all of these are interlinked – whether it is the trade war, or the trade war translating into a technology war. For now, therefore, we wait and watch what happens over the next couple of months in the context of US-China trade interactions.

Q: In your opinion, is there a clear shift from liberalism & free trade to protectionism & unilateralism? Why/why not?

AB: There’s a shift from, let’s say, from multilateralism to unilateralism & bilateralism because the United States has started looking at everything in a bilateral context. They are not using the WTO; they are flouting the WTO’s norms. Since multilateralism has weakened, one would say the rules and global framework that govern trade through the WTO body have weakened.

Though there are some questions that remain and must be dealt with, such as the impact of the free trade on the losers as trade has both winners & losers. The impact on the losers has come to the fore, as it has been brought out by the US president in his many statements. So the question is how do you deal with the losers, how do you compensate those who are losing out in the trade process. And, for now there is also a rise in protectionism on account of what the US is doing because of their “America first” objective and in the context of this, their focus on bilateral deficits to be sorted out on a bilateral basis – which is not really what trade theory asks you to do. Trade theory focuses on looking at the overall trade deficit; not bilaterally so. But it has reached a point that protectionism & protectionist instruments are being used to a large extent. But we can’t say that free trade has gone off completely & it’s going to be taken over by protectionism; because that is not workable in an interdependent world where almost all production is highly connected through value chains.

Q: Has WTO failed in its mandate as a multilateral trading platform which can resolve trade disputes & ensure smooth trade? Are there any reforms that you would like to suggest to address the issue?

AB: To a large extent, the WTO has not fulfilled its objective in terms of the Doha Round in terms of catering to the interests of the developing countries – agriculture, subsidies, so on & so forth. But to say that it has failed – I would not say so because the dispute settlement mechanism has been the strength of the organisation and a lot of developing countries experiencing unfair trade practices could approach the WTO & could get their issues resolved. It promoted free trade; tariffs around the world came down. So, the DSM has been a big strength of the WTO; but that is also under threat because of the US delay in appointments to the appellate body of the WTO.

The one big reform should be that the DSM should be put in motion. The efforts by the US to delay appointments to the Appellate Body – something should be done about that. Also, India should start participating in the plurilateral platform being set up to reform the organization.

Q: What can the Government of India do to tackle the menace of protectionism?

AB: I wouldn’t exactly call it a “menace”. One big thing that India should do is to enhance its own competitive efficiency, focus on manufacturing, increase its involvement in international negotiations wrt  e-commerce rules and other areas of interest to itself and developing countries. We should participate in regional trading agreements. We should try to evolve & sustain a multilateral rule based trading order by bringing together countries that believe in a ruled based global trade order & taking them forward in sustaining the WTO.

Dr. Amita Batra, is currently a Professor at Centre for South Asian Studies, JNU. She has worked as Senior Fellow at ICRIER, New Delhi for five years and as Reader, Economics, Hindu College, University of Delhi prior to that. Dr. Batra has also worked with other prestigious organizations. She was a Consultant for the World Bank, New Delhi and a Visiting Professor at Indian Institute of Management, Ahmedabad.