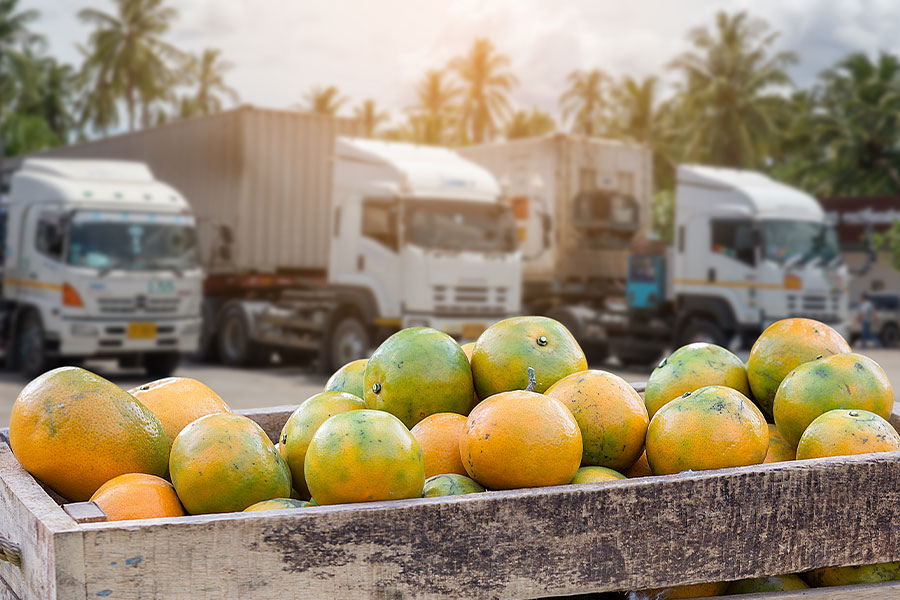 The pandemic catalyzed the Indian Food and Beverage (F&B) industry to undergo several transformations that would have been previously inconceivable in such a short period. Many trends were overhauled as new challenges and opportunities emerged in lieu. These worldwide changes have called for radical innovation with rapid rates of adoption towards greater food safety, hygiene, automation, and food delivery systems. Arguably, the industry’s ability to adapt has resulted in its resilience despite the harsh negative outlook.

Even in India’s growth story, the F&B sector has an important role to play as one of the world’s largest food processing industries. As India races towards its export target of US$ 400 billion in FY 2021-22, this IBT Infographic blog analyses the performance of F&B exports since 2016.

Peaks and Troughs in F&B segment 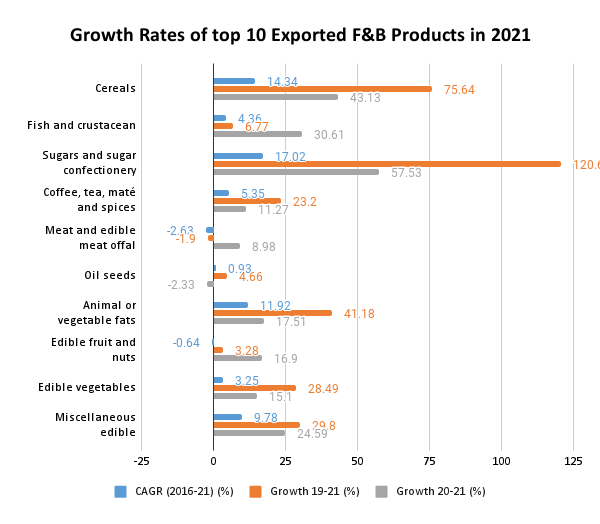 In addition, the growth rates for 2021 over 2019 showed exports of cocoa and cocoa preparations (HS 18), lac, gum, and resins (HS 13), and meat (HS 02) to have contracted during the pandemic period with slower rates of recovery.

India’s cocoa exports have been faced with myriad challenges that stem not only from unfavorable weather events in Kerala and Karnataka, but also the price volatility, slower dissemination of scientific growing practices, and the greater need for state-driven incentivization initiatives. In the case of natural resins and gums, these complex organic compounds are used as raw materials for the synthesis of incense, production of varnishes, adhesives, and food glazing agents[2]. A decline in industrial production can be perceived to have had a significant impact in reducing its export figures. On the other hand, meat exports have witnessed a drop largely due to lockdown restrictions and food safety-related issues.

As one can glean from the growth rates of 2020-21, the waning of export values in 2020 for certain segments in the F&B was largely caused by Covid-related disruptions that are expected to reach normalcy by 2022. Even the negative export growth rate of -2.33% for oil seeds exports has been attributed to domestic soybean and rapeseed meal being outpriced by its close competitors. The relatively high prices being quoted by the farmers have made oil meals uncompetitive in the global markets compared to the previous year.

Among the F&B products, sugar and sugar confectionery exports projected the highest growth rates across the three indices of CAGR 2016-21, growth rate 2019-21, and growth rate 2020-21 at 17.02%, 120.66%, and 57.53% respectively. In other words, not only did this segment present a consistently upward trend in exports, but it also didn’t suffer adversely from the shock of the global pandemic. 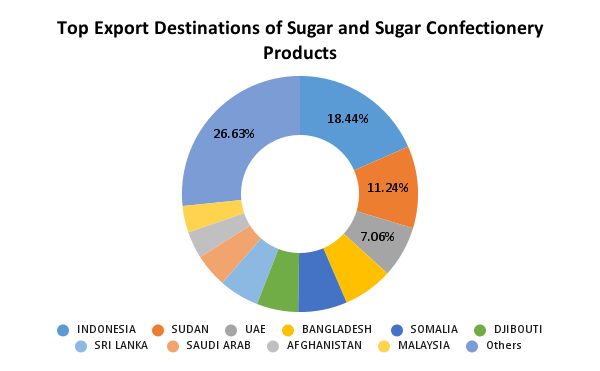 Figure 2: Top Export Destinations of Sugar and Sugar Confectionery Products from India in 2021

A reshuffle in the top ten export destinations of sugar exports from India was also noted in 2021 viz-a-viz 2020 with Indonesia (18.44%), Sudan (11.24%), and UAE (7.6%) constituting over 36% of India’s importing markets. While exports to Afghanistan dried up and shrunk by -7.59% due to closed borders, there are expectations that bilateral trade will resume despite uncertainties regarding the nation’s political development under Taliban rule. Major leaps were made in India’s exports to the Middle East such as UAE and Saudi Arabia, as well as Indonesia, Bangladesh, and Djibouti.

Sugar and sugar confectionery exports are expected to face a tough battle ahead in 2022 as exports to its top importing markets may face disruptions. While trade with Afghanistan is mired with uncertainty due to political turmoil, the foreign currency shortage in Sri Lanka may also reduce demand for India’s sugar exports. Additionally, India is expected to face stiff competition from Thailand as a supplier to Indonesia, which is already its top trading partner in sugar exports.

Additionally, India is faced with the perennial challenge of rationalizing the exports of such a water-intensive crop. The dropping groundwater levels and their associated environmental concerns remain unabated and unanswered by a lacking political will. The disposal of the massive opening stock of sugar surplus and export assistance provided to the farmers also compound the burden on the government.

Under the Ethanol Blending Petrol (EBP) Program, India aims to take decisive action in transitioning towards a low carbon economy with a target of 20% blending of locally produced ethanol by 2030. With the current production capacity of 426 crore litres from molasses-based distilleries and 258 cr. litres, diversion of the sugarcane surplus for ethanol production has been targeted at 60 lakh MT of sugar and 165 lakh MT of grains per annum in ESY 2025 (Ethanol Supply Year – December to November of the following year) to produce 1,350 cr. litres[1]. Both ethanol blending of 20% with petrol by 2025[2] and the export policy of the government are expected to greatly impact the sugar industry.

Another source of exogenous uncertainty originates from the recent consultation requested by Guatemala at the WTO concerning India’s mandatory minimum prices for sugarcane [the Fair and Remunerative Price (FRP) and State-Advised Prices (SAPs)], non-exempt direct payments, or other non-exempt policies[3]. The three domestic support measures to sugarcane producers have been adjudged to be inconsistent with India’s obligations under the Agreement on Agriculture. The panel report circulated on 14th December 2021 recommended the withdrawal of prohibited subsidies within 120 days from the adoption of the report. While a formal appeal was made by India on 11th January 2022 to the Appellate Body, India will be obligated to make appropriate changes if the ruling also comes in favor of the opposing countries of Brazil, Australia, and Guatemala.