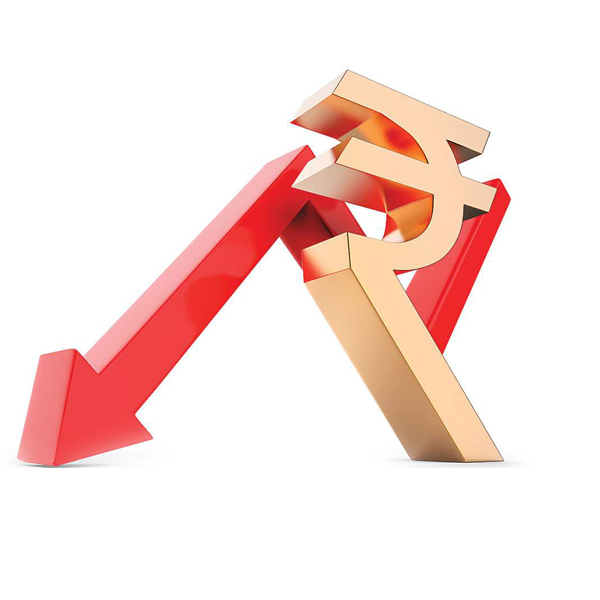 Falling rupee: Is the situation as bad as it was in 2013?

The Indian rupee, which hovered between 68 and 69 rupees during most part of this year so far has underwent a sudden decline, falling by nearly 10% in recent days to reach above 72 rupee mark to a dollar. Concerns over the US-China trade talks, recent developments in the Middle East followed by the US building pressure on its allies to stop buying oil from Iran by November 2018, economic crisis in Turkey which led to a free fall of the Turkish lira, economic downslide in Argentina and the rising crude oil prices have together become the contributory factors leading to a weaker rupee in comparison to dollar.

A weak rupee not only hurts the country and its importers on account of a higher import bill and current account deficit but also tends to be inflationary. Trade analysts fear that the rupee will continue to go downhill further unless special corrective measures are undertaken. Already, certain analysts have started demanding the Reserve Bank of India (RBI) to take corrective measures and are airing concerns that the situation could become as bad as it was in 2013! The Government till now has ruled out any cuts in fuel taxes, but has said it could consider options of selling NRI bonds or deposit schemes to foreigners to stem the slide in the rupee. This, however, will not be enough and much more need to be done if we are to safeguard ourselves from a free fall.

Given all this; given that the current rupee depreciation is inevitable because global capital is flowing towards higher US interest rates, and because global oil prices are increasing; given that a depreciating rupee works as an external deficit corrector by making imports costlier and exports cheaper; given that the rupees fall has been drastic, it is not likely that the situation could turn out to be as bad as it was in 2013. This, pundits in TPCI feel, is because we are currently sitting on a much stronger ground, compared to what the situation was back in 2013.

Though it is very likely that RBI might take some drastic measures to stop the rupee decline and announce further rate increase sooner or later – of at least 50 basis points in the next two consecutive policies – fact remains that India’s domestic-centric economy is far less exposed to global trade shocks, in terms of macro parameters like forex reserves, GDP growth rate or fiscal deficit, than, say, Indonesia, Argentina and Turkey, which rely on a narrow range of commodities and are more prone to external business cycles. The increased interest rates, when they come into effect, will attract global investors in debt papers, thus bringing in foreign currency flows to India. Already, net foreign portfolio inflows seem to have picked up in recent weeks, after previously experiencing a lull for a while.

Let us see some more reasons which go on to suggest that the present situation cannot be compared to what it was in 2013. One pointer to this is the expansion witnessed in India’s economy in April-June quarter this year, which at 8.2 per cent was the highest in last two years, thus showing signs of economic prosperity.

India’s external vulnerability metrics, too, look far more stable as of now compared to what the situation was back in 2013 when India was among the worst-hit emerging markets. India’s foreign exchange reserves now provide around 10 months of import cover compared with six months in 2013. While in 2013, India’s foreign exchange reserves were around $285 billion, they stand at $405 billion today. Moody’s, which increased India’s credit rating some time back, have already made it clear  that they see no immediate risk to the country’s credit profile on rupee fall.

There are other significant factors too that support our point! Rupee had fallen 23% between February and August 2013 whereas the fall has been about 12 percent so far between January and September. While the fiscal deficit in 2013 was about 4.8% of GDP, it is around 3.5% in 2018. The Current Account Deficit (CAD) too was 3.4% in 2013 compared to it being less than 2% presently, despite sharp increase in the deficit.

The fall in crude price too has not been as bad this time, as it happened in 2013. While the global crude oil price reached to about $107 a barrel at its peak in February-August 2013, the average price in January-September has remained under $75 a barrel.

It is clear therefore that the situation was far bad in 2013 where we were faced with sharper rupee depreciation; there were much bigger internal and external deficits; oil prices were much higher and the forex reserves were far lower; than the situation is in 2018.

So there is no cause to worry, at least not at this stage. Though RBI’s expected rate hikes, likely to happen anytime now, will complicate matters significantly for the country’s banking sector that is already reeling under a massive bad debt problem, and the move will go on to hamper India’s export considerably, we have reasons to feel comfortable as we are sitting on a strong economic growth – a crucial comforting factor that will serve as a resilient cushion to lead us back to better days.

Coffee Shops Near Me

I read a lot of interesting posts here. Probably you spend
a whole lot of time writing, Thanks!
King regards,
Thomassen Raahauge

Enquiry for Falling rupee: Is the situation as bad as it was in 2013?