India is the second largest producer of fruits and vegetables in the world, but hasn’t replicated the same success in exports. Centre for Advanced Trade Research analysed the growth opportunities for the sector, and how it can leverage its strengths to enhance its export competitiveness and extract higher value. 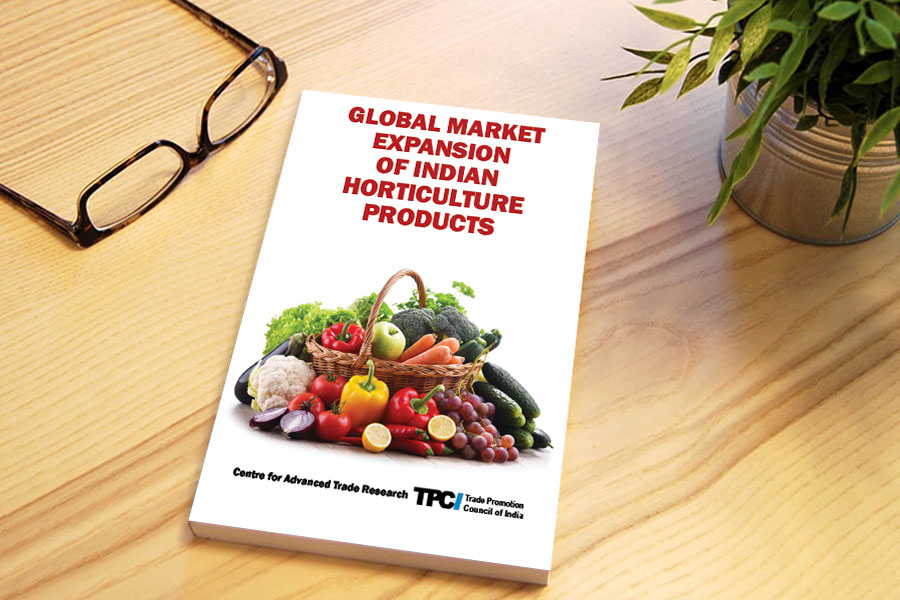 As per the Food and Agriculture Organization (FAO), India is the 2nd largest producer of fruits and vegetables, behind China. The diversified climate has supported availability of the various fruits and vegetables in India throughout the year. Other countries which are leading in the production of fruits are Brazil, the United States of America (US) and Turkey, whereas leading producers of vegetables include Vietnam, US, and Turkey.

There are many fruits in which India leads in terms production. Figure 1 below shows that for fruits like bananas, mangoes and guava, lemons and papaya, India holds first rank among the list of producers. For mango, states like Uttar Pradesh, Karnataka, and Andhra Pradesh account for 40% of India’s production. In case of bananas, some Indian states such as Tamil Nadu, Gujarat, and Maharashtra lead in production and in papaya, states like Andhra Pradesh, Gujarat and Odisha are the best performing states. Furthermore, in the production of orange and citrus fruits, the country is only behind Brazil and China. 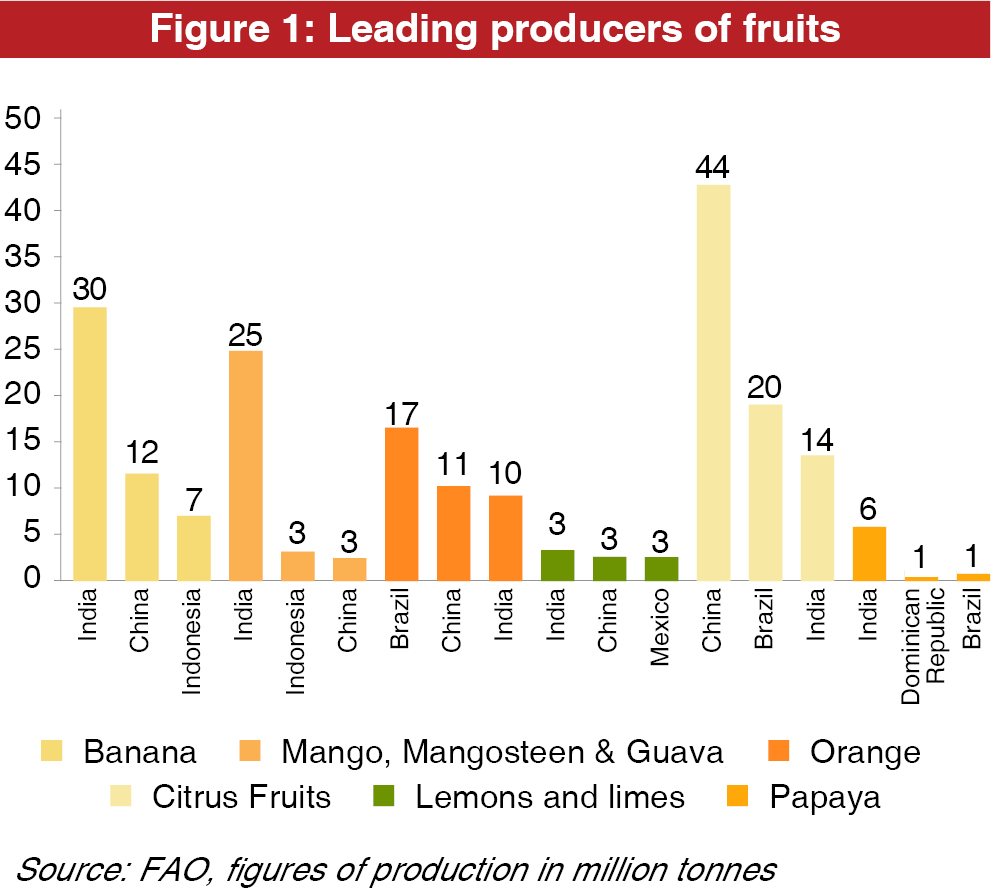 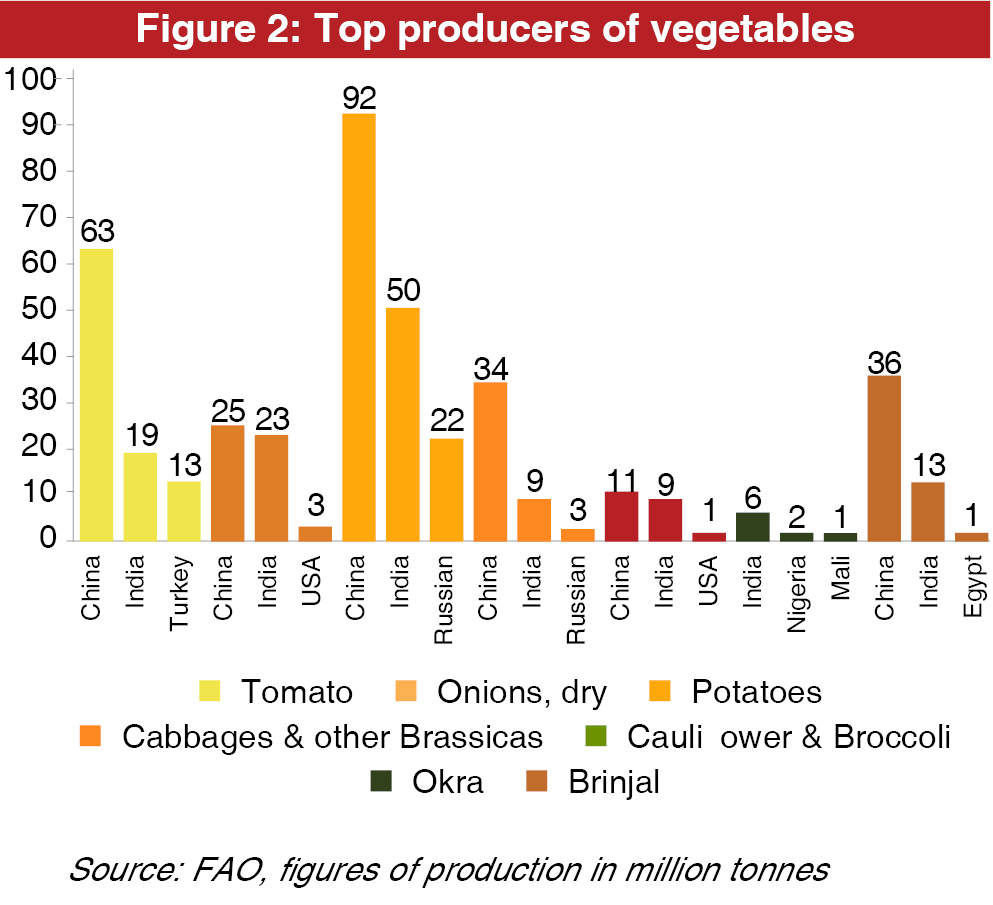 One of the reasons for growing penetration is that the crops can be grown on small farms, which allow such farmers to cultivate them with quick returns. Small and marginal farmers who own less than 2 hectares of land have a share of 86.2% in total farmers of India. The demand for these products has also been rising due to factors like improving income, health consciousness, growing consumption and urbanization. Furthermore, diversified climatic conditions have supported availability of the various fruits and vegetables in India throughout the year.

Despite leading in production of fruits and vegetables, India’s exports of these products have not replicated the same success. During 2010-20, there has been an increase of US$ 2.8 million in the exports of India’s horticulture products, with export value of US$ 3.19 billion in 2020. Some of the major destinations for country’s exports are UAE, Netherlands, US and Saudi Arabia. 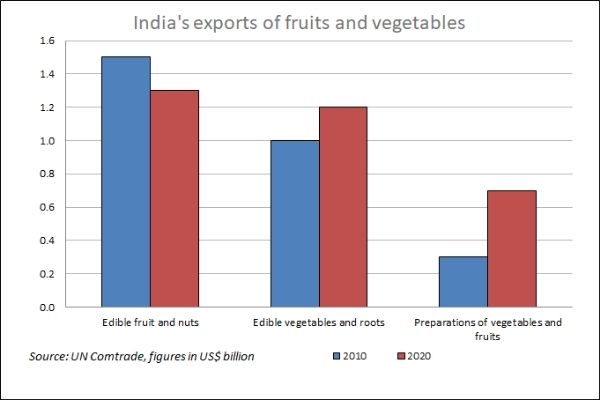 There are certain products which have outperformed the average export performance of horticulture products. These include onions, potatoes, chilled or fresh vegetables n.e.s., grapes etc. Various factors have contributed in the growth of exports of these products. For instance, the export of fresh grapes have increased from US$ 102.5 million in 2010 to US$ 307.9 million in 2020. Initiatives like Agri-export zones (AEZs) and GrapeNet have helped in catalysing this growth.

Similarly, in fresh potatoes, exports increased from US$ 26.9 million in 2010 to US$ 70.7 million in 2020. For potatoes, exports have increased along with a significant increase in the production. However, in global exports of horticulture products, India has less than 2% share. In leading importing markets for fruits and vegetables such as US, Germany, UK, China and France, India’s share is less than 1.5%. With the large base for production of horticulture products, the country has potential to export the products to these countries.

What can be done further?

Centre for Advanced Trade Research developed a research paper on Market Expansion of Indian Horticulture Products, which used Revealed Competitive Advantage analysis to ascertain some of the horticultural products that can be tapped in the short run by India to enhance its exports.

The report concludes that India should focus on the following measures to enhance its horticulture exports to target markets: