• Vietnam and EU have signed a bilateral trade and investment agreement on June 30, at a time when global trade is suffering a setback due to rising protectionism.
• The deal is expected to further increase Vietnam’s trade surplus with EU, which stood at US$ 28.7 billion in 2018.
• The Vietnamese apparel sector is expected to gain the most, but tough rules of origin and long tariff elimination periods would mean delayed gratification for exporters.
• EU will benefit from simpler regulations and greater protection for its GIs, but could face challenges due to corruption and the backlash from state-owned enterprises.

In an era where ‘market access’ appears to have become a closely guarded national asset, ‘liberalisation’ is under siege, and the ‘developed’ vs ‘developing’ debate is getting all the more polarised; there is a desperate need for positive news. And the world got exactly that when the European Commission and Vietnam signed a bilateral Free Trade Agreement on June 30, 2019. It is hailed by the EC as its most ambitious free trade agreement with an emerging economy till date.

The deal will lead to elimination of nearly 99% of customs duties between the two partners, and needs to be ratified by the European Parliament and the Vietnamese National Assembly. Like other major FTAs, this agreement has come after years of difficult negotiations, particularly due to Vietnam’s human rights record. The agreement also includes clauses on IP, labour rights and environmental regulations.

Vietnam has shown a strong commitment to export-led growth roadmap, with around a dozen free trade agreements, including the Comprehensive and Progressive Agreement for Trans Pacific Partnership (CPTPP). It expects strong gains from the agreement with EU, due to a strong trade surplus. Its exports to EU stood at US$ 42.5 billion in 2018, compared to US$ 13.8 billion of imports. The government expects a gain of 20% in exports to EU by 2020, while imports are expected to increase by 15.3% during the period. Furthermore, Vietnam has been quite adept at leveraging FDI to push itself up the manufacturing value chain, and this FTA will help improve investments into manufacturing. 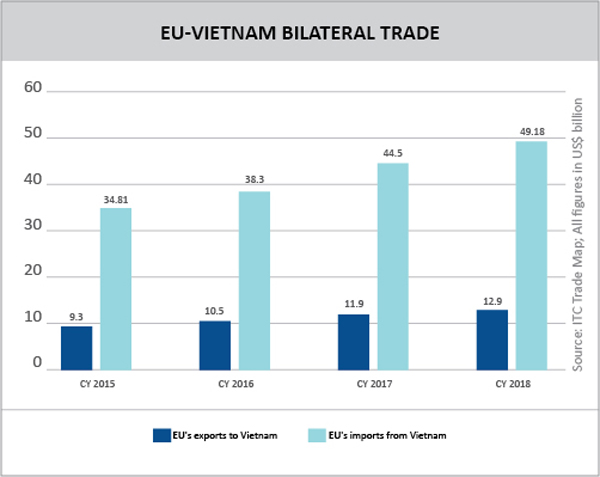 EU-Vietnam trade has grown at a brisk pace over the past decade from € 7.6 billion in 2004 to around € 54.6 billion in 2018. As a result of the agreement, Vietnam will liberalise 65% of import duties on EU goods immediately, while the rest will be removed over a period of 10 years. EU on the other hand will eliminate its duties over a 7-year period.

EU has negotiated longer liberalisation periods of 7 years for some of the products that are sensitive for its companies like textile, apparel and footwear. EU will provide access on sensitive products like rice, sweet corn, garlic, mushrooms, sugar and high-sugar-containing products through tariff rate quotas (TRQs). Vietnam has agreed to remove over 90% of export duties for its products.

The largest export for Vietnam to EU is electrical machinery and equipment, with exports standing at US$ 20.2 billion in 2018. A number of global electronic manufacturers are shifting their production base to Vietnam. Samsung Electronics produces over half its mobile phones there. However there is still a long way to go for Vietnam to match the likes of Malaysia,      as it is still largely involved in low cost assembly.

The sector that is expected to gain the most from Vietnam’s perspective is RMG. Garment exports of Vietnam to EU reached US$ 5.05 billion in 2018 (chapters 61 and 62). Vietnam has gained tremendously from the declining competitiveness of China in this sector due to its low labour costs. Currently, EU sources 50% of textiles, garments and footwear from China and only 8% from Vietnam, making potential gains from an FTA quite lucrative. The catch here is that it depends heavily on imports of primary materials and components.

But with this agreement in place, Vietnamese garment exports will only benefit if the fabric is also manufactured within its own borders. One clause where EU has been particularly strict is on rules of origin for textiles, ostensibly to prevent an onslaught of products from China. This defies the shift towards global and regional value chains on one hand, and also means delayed gratification for Vietnamese exporters; since they will have to invest in an end-to-end production network.

Another flip side of the agreement is for Vietnam’s 2,000 state-owned enterprises, which own around 40% of the economy. Vietnam will have to adopt a policy of non-discrimination, which will allow EU firms to bid for contracts in infrastructure, railways, power generation, etc.

EU businesses will also benefit from the removal of a significant non-tariff barrier in Vietnam – the Economic Needs Test (ENT) that they would otherwise have to undergo before opening a retail outlet. Vietnam will remove this clause within 5 years. Moreover, 169 European food and drink goods will benefit from the strong GI protection under the agreement. Products like Champagne, Roquefort cheese and Scotch Whisky will only sell if they are originating from their respective regions. Furthermore, EU is looking at the larger picture, wherein an agreement with Vietnam could pave the way for a larger agreement with the ASEAN region. So far, the two sides have struggled to build consensus on this front.

But EU businesses will remain wary of the fact that Vietnam remains a considerably difficult country to do business owing to the high levels of corruption. It was ranked 117th out of 180 countries on Transparency International’s Corruption Perception Index. Moreover, they risk facing a strong backlash from the SOEs and public sector employees, who would feel threatened by their entry into the market.