Drone PLI: A flight towards self-reliance

Given its strength in innovation, information technology, prudent engineering, and huge domestic demand, India has bright prospects to be a global drone hub by 2030. A combination of the right policies such as the recent drone PLI scheme as well as industry efforts such as foreign collaboration will be the secret ingredients in India’s journey to success. 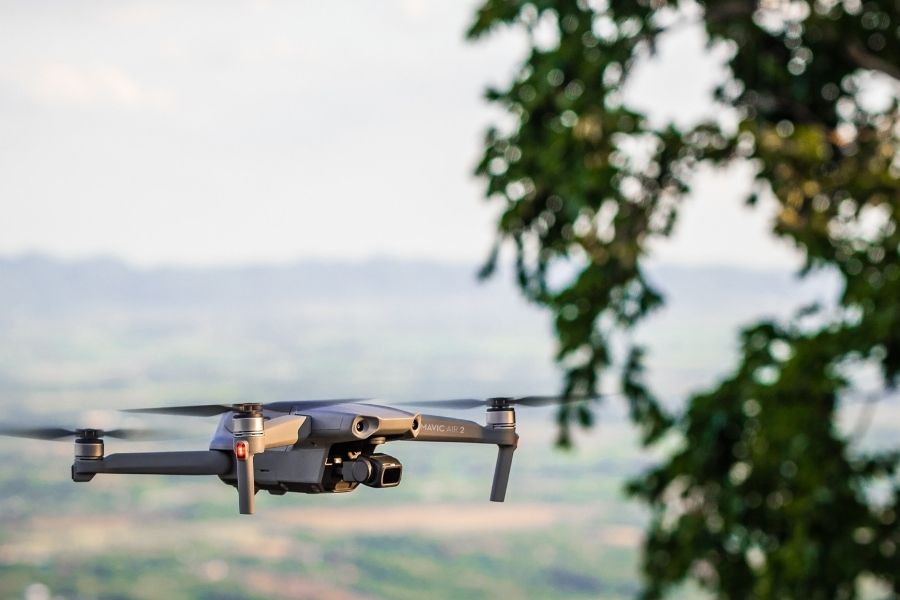 Commonly known as unmanned aerial vehicles (UAVs), ‘drones’ operate without any human presence but are controlled with human involvement. Though they were envisaged for aerospace and military activities, drones have made their way into myriad uses due to the effectiveness and security they bring. Thus, they can be deployed in various sectors such as agriculture, mining, infrastructure, surveillance, emergency response, transportation, geo-spatial mapping, defense, and law enforcement.

Recently, these UAVs have garnered a lot of interest because the government announced new liberalized Drone Rules, 2021 to support the development of the drone sector. The liberalised rules, which have reduced the number of forms to be filled from 25 to just 5, will also provide a thrust to the growth of medium and small enterprises, which are at a nascent stage of growth. Since the fee for remote pilot licenses has been reduced and the validity of license being ten years, it can translate into a phenomenal growth opportunity for the startup ecosystem to thrive in this sector.

The new rules facilitate security clearance for operating and flying tiny drones in air. In addition, the increasing focus on cargo deliveries will be driven through drone corridors. The government has also augmented the payload from 300 kg to 500 kg. While the MSMEs engaging in drone manufacturing need to demonstrate annual turnover of Rs 2 crore, drone component makers will need to show turnover of Rs 50 lakh, encouraging investment from companies to invest in the flourishing ecosystem.

Towards this end, it also introduced the drone PLI scheme. The drone PLI scheme has an outlay of Rs 120 crore spread over three financial years. An incentive of 20% will be offered on the value addition made by a manufacturer of drones and drone components for all 3 years. The government envisages that India can be a global drone hub by 2030. This is attributed to the country’s strength in innovation, information technology, frugal engineering and its huge domestic demand. Commenting on the scheme, the Ministry of Civil Aviation stated:

The drone PLI Scheme will ensure component and drone manufacturers come to India, leveraging the advantageous manufacturing environment. Furthermore, it will allure investor foray and hence is a vital step for achieving India’s vision of an Aatmanirbhar Bharat. The scheme can make India a drone hub by 2030 and make it at par with the other global giants such as US, China and Israel amongst others. It includes a wide variety of drone components:

The Global Drone Market was about US$ 18.28 billion in 2020, which is expected to surge to US$ 40.9 billion by 2027, witnessing a compounded annual growth rate of 12.27%. The US is the largest drone market globally and accounts for 50% of the drone investments. It is estimated that by 2024, US commercial drone unit sales will be four times vis-à-vis 2018.

The west Asian country Israel continues to be a global force in the multibillion-dollar UAV industry. The country commenced experimenting with drones back in 1969 and a study by business consulting firm Frost and Sullivan in 2018 highlighted that it exported a staggering US$ 4.6 billion worth of UAVs, constituting 10% of the country’s military exports. India, which is fast expanding the use of drones, also signed a deal with Israel, that would not just contribute to Israel’s exports but also facilitate access to advanced technology.

While the military segment continues to command over 56.7% of the Global Drone Market in 2020, the increased use of drones for diverse elements is expected to push up demand from other segments in future. According to research reports, North America will continue to dominate the drone market.  However, Asia-Pacific will be the fastest-growing market. For example, the Chinese drone market is catching up quickly, with about 558 thousand  registered drone operators in 2020. India, too, is gearing up to be a force to be reckoned with the global UAV sector. According to the NITI AAYOG, the UAV sector in the country holds tremendous opportunity with the potential to contribute about 4-5% of India’s GDP. Policies like liberalisation and PLI for drones are going to give a major fillip to the sector. Amitabh Kant, CEO of NITI Aayog, opines:

Indian market for UAS will be $50 billion over the next 15 years. India must realize the full potential of this technology and leverage it as a powerful tool not only for the security and safety, good governance, increased productivity, but also to encourage consumers in commercial applications to develop a sophisticated UAS industry sector and make a new India by 2022.

Applications of drones in India

UAVs have seen exponential growth in demand in India over the past few years. India, which is now the third most attractive startup nation globally, has more than 50 start-ups providing services in this new industry. A number of Indian startups, government agencies and PSUs have piloted and even scaled up operations of drones. For instance, Indian Railways is utilising drones for examining and 3D mapping for dedicated freight corridors, while the national mining giant Coal India is harnessing drones for testing illegal mining as well as pilferages. Similarly, in June ’21, the Directorate-General of Civil Aviation gave a nod to a consortium of 13 delivery startups to test fly beyond visual line of sight (BVLOS) drones. These include Dunzo, Swiggy and Zomato, Throttle Aerospace, budget airline SpiceJet and Reliance-backed drone startup Asteria Aerospace.

The table given below enumerates some of the industrial applications of drones in India. In the case of the power and utility sector, UAVs can be used for various applications. For example, GIS data from drones to optimize tower layouts; LIDAR for area measurements in the case of a solar power plant; 3D models and 3D modeling for effective site planning and estimating scope of work; and AR/VR for remotely monitoring the site.

2.       Remotely inspecting a tower from the top using drones and a VR headset.

4.       Creating 3D models of the site from the data collected by drones before construction begins to optimize layouts.

5.       Transferring information from drone to a handheld device through IoT. Agriculture 1.       Enhanced video output augmented with information about crop health overlaid on a drone feed.

2.       Videos and images captured through drones can be used for training farmers.

4.       Planning for contour trenches & estimating the scope of work through a 3D model created from drone feed.

5.       Collecting information from sensors and communicating with the drone remote operating center. Highways 1.       Information for engineers on site highlighting areas identified for maintenance through drones.

3.       Automatically monitoring the progress by calculating the length of the road created through a drone video.

4.       Drone feeding information to create 3D models to estimate the scope of work while building a tunnel.

5. Real-time visibility to remote engineers who can assess road conditions through a drone feed. Mining 1.       Using 3D modeling and AR, engineers can run simulations for blasts to view through AR headsets to identify risks.

2.       3D models created with the help of drone feeds can be consumed by engineers to access and monitor sections of the mine.

3.       Using drones and artificial intelligence we can detect if workers on ground are complying with regulations like wearing hard hats etc.

4.       Using 3D models created through drones for blast planning in a mine.

5.       Drones can act as first responders to an accident site and transmit real time information to rescue agencies. Railways 1.       Site engineers can use AR headsets to consume information captured by drones like broken bolts etc.

2.       General managers in railways can remotely visit a site through virtual reality and inspect the site from the information captured by drones.

3.       Images and videos captured from a drone can be passed into a algorithm to count the number of sleepers laid on track.

4.       3D models prepared through drone feeds can help engineers determine the volume of a hill required to be cut to construct a railway line.

5.       Drones can transmit information through the internet in case of an accident and can help rescue teams plan the best discourse Industry examples 1.       IKEA used AR to showcase to consumers how furniture would look in their homes.

3.       Technology giants like Google and tesla are building self driving cars using AI.

5.       GE is using IoT to monitor and collect data on its aircraft engines.

In addition to the PLI drone scheme and liberalization rules, the government has also come up with some other initiatives to support this sector. Some more schemes in progress are likely to have a transformative impact using drone technology.

SVAMITVA Scheme: Aiming to provide rural India ownership of the property of land parcels, the Survey of villages and mapping with improvised technology in village areas (SVAMITYA) will harness drone technology, from 2020 to 2025. This will enable improvement in financial stability of rural citizens, as they can use the land for financial transactions.

Hara Bharat Project: A unique environmental conservation project in Telangana state aims to plant 1 billion trees by 2030. This gargantuan mission will be achieved in partnership with a drone start-up ‘Marut Drones’, enabling reforestation.

While the government has come up with various supportive measures, industry has an important role to play. For example, the industry must invest in research & development initiatives and look for collaborating with foreign companies to learn from international best practices. In order to enable the market and resolve the supply challenges, training institutes are a must to impart relevant skills and capacity building. Lastly, robust certification programmes for drones can ensure that the industry lives up to international quality standards and India becomes a leading drones exporter.

Information is very useful.
Is ther any way we can see the info on profitability and ROCE on drone manufacturing in india?
Thank you

Enquiry for Drone PLI: A flight towards self-reliance