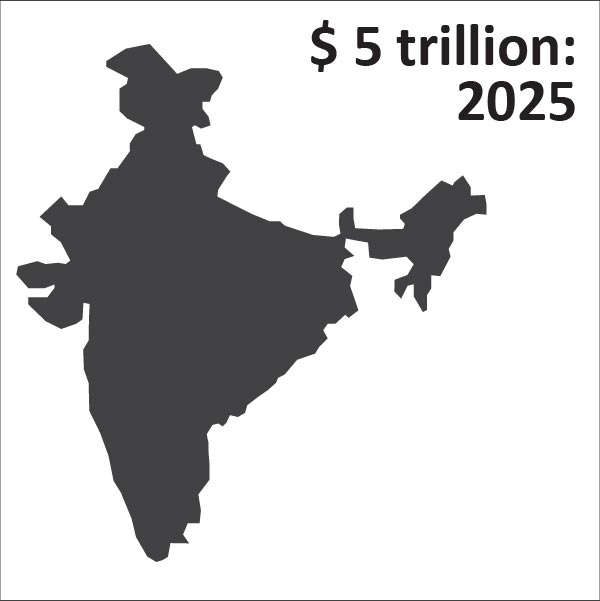 Aim is high but we are already on the course! India that was ranked 142 among 190 nations on the World Bank’s ease of doing business ranking in 2014 has climbed to 77th rank this year. And there seems no stopping! Prime Minister Narendra Modi has now set an ambitious target of India breaking into top 50 countries in the World Bank’s ‘Ease of Doing Business’ ranking and is aiming to nearly double the size of India’s economy to USD 5 trillion. According to him, this growth has been achieved because the policy paralysis has ended and his government was giving policy-based governance that has helped catapult the country from to the 77th position this year.

In the World Bank’s annual ‘Doing Business’ 2019 report, India secured 77th position. New Zealand tops the list, followed by Singapore, Denmark and Hong Kong. The United States is placed at 8th and China ranked 46th. Neighbouring Pakistan is placed at 136. India has improved its ranking by 53 positions in the last two years and 65 places in four years since 2014.

Union Minister for Commerce & Industry Suresh Prabhu too is upbeat at this development. After all, it is his ministry which has done most of the hard-work to lead India to such levels of growth. He is of view that the overall mission of the government, led by Prime Minister Narendra Modi, is public good. Speaking at a public function recently, Suresh Prabhu placed his full trust in central leadership and said he is confident that India will come in the first 50 ranks in the next fiscal. Prabhu also announced that the Government is creating ‘sub-national’ Ease of Doing Business parameters which will be measured at the district level because that is where the local industries are flourishing. “It is going to be bottom-up approach,” he said.

Taking India’s economy to level of USD 5 trillion and leading India to come in the first 50 ranks in the World Bank report for next fiscal is going to be an uphill task. Talking to top industrialists including Mahindra Group Chairman Anand Mahindra, Vedanta Resources Executive Chairman Anil Agarwal, CII President Rakesh Bharti Mittal, Kotak Mahindra CEO Uday Kotak, PayTM founder Vijay Shekhar Sharma and ASSOCHAM President BK Goenka among others, the Prime Minister said the government was working on a new industrial policy to blend realities with progress. “A policy which can understand the industry… This policy will be in line with the vision of a new India,” the PM said.

PM Modi also launched the Ease of Doing Business Grand Challenge with Startup India Portal as the platform. The objective of this challenge is to invite innovative ideas based on Artificial Intelligence, Internet of Things, Big Data Analytics, Block Chain Technology and other cutting-edge technologies to reform the Government processes.

This announcement was made in a meeting ‘Reflections on Ease of Doing Business’ organized by Department of Industrial Policy and Promotion (DIPP) with an aim to gear up for India’s ranking to leapfrog on the ‘Doing Business’ index next  year and boost the country’s investment attractiveness.

The Government has also prepared a Working Group tasked to develop a roadmap towards achieving a five trillion dollar economy by 2025. The group has been constituted by the Department of Industrial Policy and Promotion in the Ministry of Commerce and Industry with participation from the government and industry. India is one of the fastest growing major economies and is currently ranked as the world’s sixth largest economy. Earlier this year, as per the World Bank figures, India pushed France into seventh place to become the world’s sixth-biggest economy. India is now eyeing to climb ahead of United Kingdom to reach the fifth spot.

However, as said, it will not be an easy task to move ahead from here. The higher we reach, the tougher it becomes. The top 50 countries have most business-friendly systems and India will have to transform all government-pubic interfaces, policies and programs, and not just the 10 measured by World Bank, if it wishes to further climb the ladder.

Says Ajay Srivastava, an experienced policy analyst associated with Ministry of Commerce & Industry: “The concept of replacing an existing system with a new one faces resistance at many levels. Love for incremental improvements in the existing system is the primary block. Fear of losing cost already incurred is another. To be successful, such projects must be led by a person with a technology background and proven expertise in delivering complex projects. Simultaneous focus on both the bottoms up and top down approaches will transform governance and make doing business hassle free for ordinary citizens and business alike.”

Citing an example, Srivastava says: “An exporter requires permissions from many government and business agencies like Customs, DGFT, shipping companies, banks, insurance companies and inspection agencies. Time and cost go up as she has to approach each organization separately. Creating a national trade network (NTN) that enables exporters to obtain all approvals, permissions, loan sanctions et all online will reduce time and cost of exporting. This will enable lakhs of small manufacturers to export directly. Today, they rely on middlemen.”

There is a momentous task ahead and combined efforts of all will enable India to reach the next goal towards its movement towards zenith.