• The COVID-19 pandemic is expected to lead to a slowdown in the global economy by about 2% for this year (compared to the forecast in September). This would imply an economic cost of the order of US$ 1 trillion and a job loss of 25 million people according to United Nations.
• United Nations economists are anticipating a US$ 50 billion drop in worldwide manufacturing exports in February alone due to the global economic damage caused by novel coronavirus.
• The Sensex in India is mirroring  as the chart has crashed from 42,000 to a low of approximately 27,000. According to the travel agent association of India, there has been a 70% to 80% cancellation in the bookings by the domestic customer.
• International buyers are asking to hold back shipments which is hurting Indian exporters as their consignments are getting stuck. 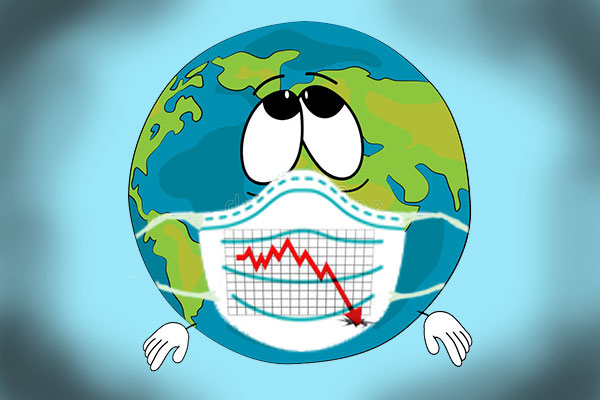 Things are moving swiftly downhill with the COVID-19 novel coronavirus. On March 12, the World Health Organization declared that the virus is now a pandemic and President Donald Trump announced 30 days ban on all travel to selected economies.

There is a strong anticipation of a slowdown in the global economy by about 2% for this year, and that will approximately cost in the order of US$ 1 trillion and job losses for 25 million people according to United Nations. Sensex  is mirroring the sentiment of the economy as the chart has crashed from 42,000 to a low of approximately 27,000.  According to the report published by United Nations, the trade impact of the epidemic for India is estimated to be about US$ 348 million and the country also figures in the top 15 economies most affected as slowdown of manufacturing in China disrupts world trade.

No matter which sector we pick to observe the market trend, the results are same. Be it pharma, energy, automobiles, banking, NBFCs, FMCG, aviation or real estate, their stock prices are plummeting continuously, and this is due to domestic and global uncertainty. German chancellor Angela Merkel has called Coronavirus as the biggest global challenge after World War II.

Global policy makers are working in earnest to limit the fallout of this pandemic. Firstly, to combat the economic fallout, the US Federal Reserve on March 15 cut its key interest rate to near zero. This is expected to escalate some consumption within a highly sceptical market. For the first time after the 2008 economic crisis, central banks of Japan, Australia and New Zealand coordinated their policies in a joint-effort to ease the global consumption, but it failed to shore up global investor sentiment. Thirdly, with oil prices dipping below US$ 30 a barrel on 16 March, and a 9% slump in share values when Wall Street opened, all signals indicate that COVID 19 will bring financial crisis apart from being pandemic. Moreover, since China is the world’s biggest oil importer, the hit on manufacturing, tourism and travel is expected to cause the first drop in global oil demand in a decade, mainly in China, the International Energy Agency (IEA).

United Nations economists are anticipating a US$ 50 billion drop in worldwide manufacturing exports in February alone due to the global economic damage caused by novel coronavirus. Also, citing the China Manufacturing Purchase Manager’s Index,  it had fallen to 37.5, which is a drop of about 20 points for the first time since 2004. This is another catastrophic signal from the point of view of global growth.

The aviation industry is taking the brunt of the impact with global travel being the first major casualty. India is set to give a stimulus package of US$ 1.6 billion to temporarily rescue Indian aviation sector. United States, too, is providing a loan of US$ 50 billion to its aviation industry to pull it out from the pandemic. Passenger operations have collapsed at an extraordinary rate as the virus spreads around the world, with Delta Air Lines Inc parking more than 600 jets, cutting corporate pay by as much as 50%, and scaling back its flying by more than 70% until demand begins to recover. Similarly, Qantas Airways has said to its 30,000 employees to go on leave.

According to the travel agent association of India, there has been a 70-80% cancellation in the bookings by the domestic customer. According to them almost 50% of the annual business in the tourism sector takes place during this period which seems to be collapsing. Adding to this, the UN’s International Civil Aviation Organization (ICAO) forecasts that Japan could lose US$ 1.29 billion of tourism revenue in the first quarter of this year due to the drop in Chinese travellers, while Thailand could lose US$ 1.15 billion.

As international buyers are now asking to hold back shipments, this is hurting Indian exporters as their consignments are getting stuck.  These exporters are expecting that in the coming days, significant numbers of such requests would lead to cancellation of orders. Employment intensive sectors like apparels, footwear carpets, handicrafts, gems and jewellery, and marine are likely to be worst affected, particularly in the first quarter of 2020-21 as per the current scenario.

The coronavirus outbreak will have a significant impact on developing Asian economies through numerous channels, including sharp declines in domestic demand, lower tourism and business travel, trade and production linkages, supply disruptions, and health effects. Now, it seems that whole world has to pass Charles Darwin’s  litmus test of survival of fittest as this seems to be a global recession.