• India’s solar industry was enmeshed in a number of issues like low tariffs, sub-par quality and dependence on China for components.
• COVID-19 has added to woes of the sector owing to cash flow crunch, recovery of payments from distribution companies and supply chain disruptions.
• So far, the government’s approach towards the situation has been quite positive, thereby reducing the negative effects caused by the pandemic.
• Going forward, however, the industry must develop a mitigation plan. Stakeholders must identify the supply chain, labour requirements and operational needs of current projects, assess what consequences may occur and manage risks that may emanate. 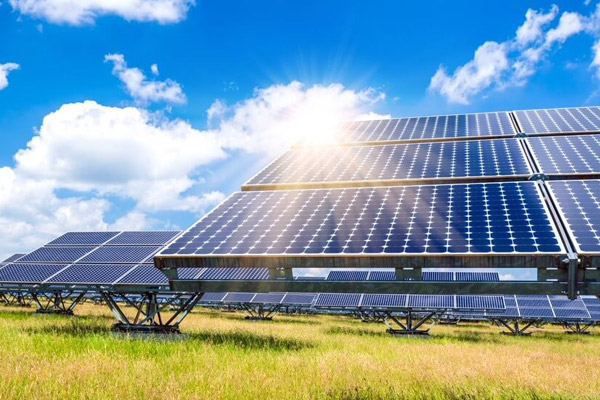 As the effects of greenhouse gases & global warming effectuated by environmental pollution have become apparent, the international clamour to protect the planet has mounted up over the years. This has cascaded into milestone developments such as the Paris Agreement (COP21) of 2016. Like any other responsible country, India – reckoned as one of the world’s largest greenhouse gas emitters – too, did not shy away from making its share of contribution. One of the commitments made by India under the deal was to ensure that at least 40% of its electricity will be generated from non-fossil sources by 2030.

In line with this international pact, India is planning to deploy 100 GW of solar power projects by 2022 through the National Solar Mission; of which it has already installed around 35 GW of solar projects. Industry estimates suggest that India even attained a fair amount of success when it came to solar exports. Thus, in 2019-20, India’s exports of solar modules and cells amounted to US$ 212.69 million, nearly doubling from US$ 121.08 million (₹ 847 crore) in the preceding year. In terms of volume, the country’s exports surged 175% to 6.9 million units in 2019-20, compared with 2.5 million in the year before. However, COVID-19 has derailed the progress significantly.

In the last few years, slowly and steadily, India is embracing the transition to cleaner forms of energy, including solar energy. However, this is not to say that the domestic solar industry is not plagued with its own share of teething problems. These existed even prior to the onset of this global health exigency.

One problem that the sector faces is that solar energy tariffs in India are among the lowest in the world, with state governments keen to reduce them further. While this may auger well for patrons, these dangerously low tariffs are turning unsustainable for some developers. Consequently, large banks like State Bank of India stopped lending to renewable energy projects that sell power at below ₹3 a unit. This leads to further bottlenecks such as the uncertainty in payments from discoms & paucity of working capital.

Another ripple effect that will have repercussions far beyond the narrow interests of power sector incumbents, is the dismal quality of solar energy installations in India, most of which are sourcing cheaper panels from China to make the cut. Animesh Damani, Managing Partner at Artha Energy Resources, said that “there is enough data available to show higher-than-expected degradation levels in the solar modules that Indian developers are using.”

Industry estimates suggest that India imports 90% of its solar cell and module requirements from China, Malaysia and Taiwan. According to India’s Renewable Energy Minister, Shri R K Singh, India imported solar cells and modules worth US$ 1.18 billion from China during April-December, 2019-20. 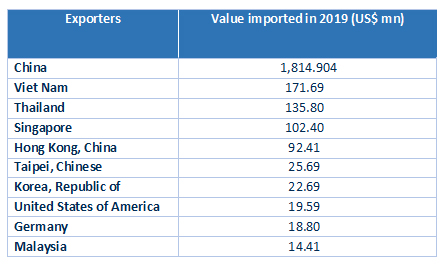 COVID-19 has added to the woes of Indian solar sector. The first strike was the disruption in supply chain due to the outburst of COVID-19 in China – which was both the epicentre of the virus & accounts for 80% of India’s solar imports. The industry was hopeful that as China resumed production, raw materials would soon come in. 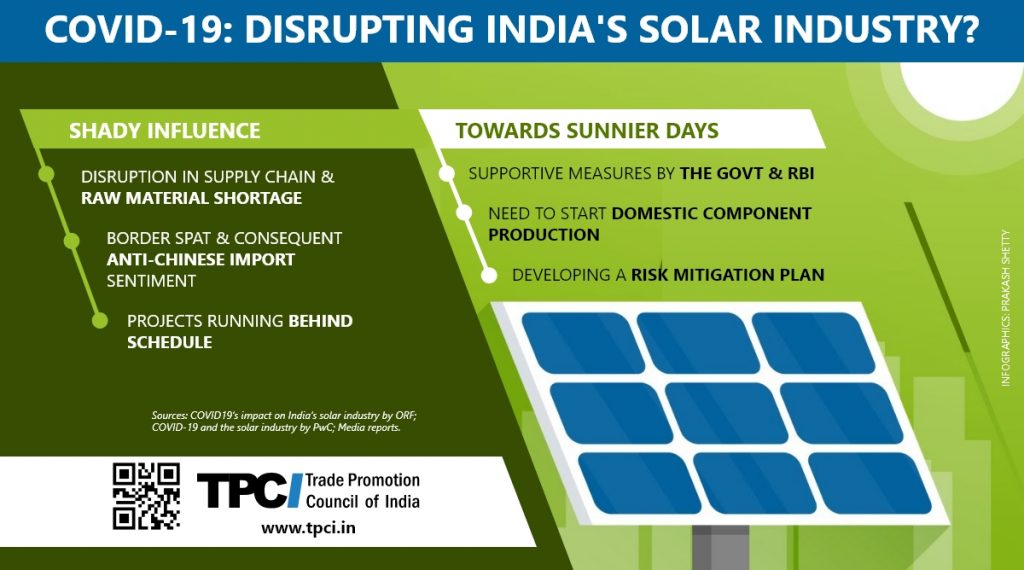 However, the border turmoil and the widespread sentiment to ban imports from China has made the situation grim for the sector. India is planning to impose a 20% Basic Custom Duty (BCD) on solar modules, solar cells and solar inverters from August. This move is detrimental for the country, as per industry insiders, since it is not economically viable for most developers to switch to other countries, as they have bid for projects on the basis of the Chinese module cost structure.

Another challenge that the industry is facing is that approximately 2.3 GW of solar plants are running behind schedule. This is because the deadline of commissioning projects was between June to August. Industry experts think that this situation is expected to further impact the capacity and future bids as it will alter the working capital cycle of the solar industry with deferred payments.

States like Madhya Pradesh and Andhra Pradesh have already expressed their inability to pay to the generators as they are unable to collect dues from distribution companies. Industry experts believe that this can affect solar project developer ratings in the future and lead to higher costs of debt, causing dent in investor confidence. Further, speculations in the industry regarding the reneging of power purchase agreements (PPAs) are rife. This can seriously deter the solar industry at large in the long-term.

The sunny side up

COVID-19 has played a spoilsport when it comes to the country’s solar industry. Taking note of this situation, the Indian government took a timely decision to declare this as a force majeure situation for project developers, keeping in mind the deadlines and the related penalties. Another step in the right direction is the RBI’s announcement to allow a moratorium on the payment of installments for all term loans and working capital loans.

Going forward, the industry must develop a more foolproof mitigation plan. Stakeholders must identify the supply chain, labour requirements and operational needs of current projects, assess the consequences that may occur and manage risks that may materialise. They must also assess contractual options. It would also make sense to consider what amendments may be necessary to ensure parties are not exposed to unreasonable risk, if Project Agreements have not been executed yet.