India faces a tough challenge in generating jobs for returning diaspora post-COVID-19. A multipronged strategy would be needed to resolve this issue, which entails investments in human capital, revival of productive sectors, and programs to stimulate entrepreneurship. 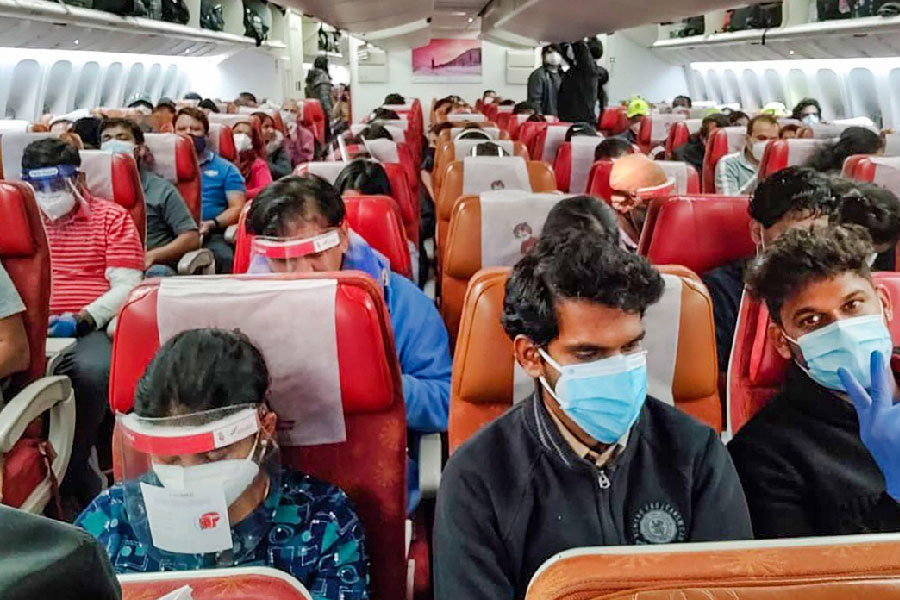 According to the UN’s International Migrant Stock 2019, brought out by The International Organization for Migration, a UN agency, India has the largest diaspora in the world, with around 17.5 million of its citizens living in other countries. Further, Indian diaspora now comprises 6.4% of the total global migrant population, with the United Arab Emirates emerging as the top destination of Indian migrants. The US, Saudi Arabia, Pakistan and Oman emerged as the other popular choices for Indian emigrants to move to. 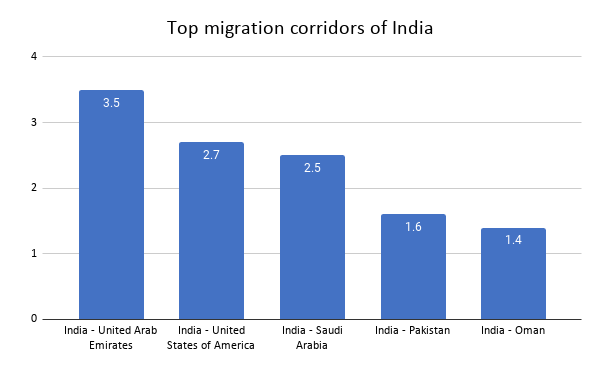 Source: World Migration Report 2020; all figures are in millions.

It is interesting to note that India is also the highest recipient of remittances (US$ 79 billion) in the world, according to the UN agency. These money transfers from citizens working abroad are not merely funds for the folks back home, but also a major pillar of strength for the Indian economy. Data from the Reserve Bank of India reveals that inward remittances helped to finance 43% of the country’s trade deficit in 2017-18.

The onset of COVID-19 has significantly compromised on the ability of migrants to send remittances home. The Asian Development Bank in its August 2020 brief titled ‘COVID-19: Impact on International Migration, Remittances, and Recipient Households in Developing Asia’, recently predicted that India will be one of the most severely impacted regions to see remittances plunge. The World Bank also states that remittances to India are likely to drop by 23% in 2020 from US$ 83 billion last year to US$ 64 billion, owing to the economic distress induced by the Coronavirus. 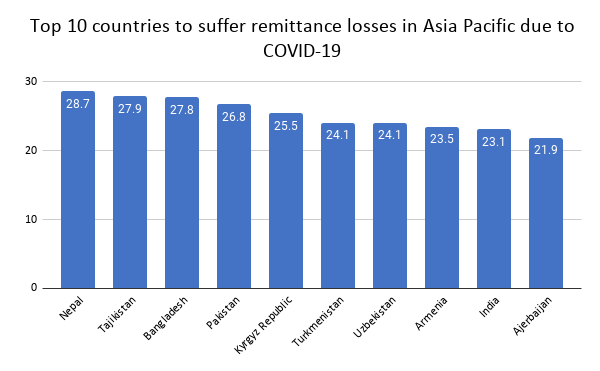 There’s another simmering crisis on the horizon – the return of overseas Indians in the light of the pandemic. It is being reported that in the Gulf countries alone, 300,000 Indians have registered to return for the country’s very own repartition mission – Vande Bharat. Further, around 400,000 Indians were expected to be brought back from the United States and the United Kingdom, besides Southeast Asia and the Gulf. According to the government, the first round of evacuations would bring back around 200,000 people by the middle of May and then by mid-June, a total of 350,000-400,00 would be flown back.

This raises a string of important questions for a nation, which prides itself on the strengths of its diaspora. The first question that the nation is facing relates to the choice of those who were eligible for Vande Bharat. This question arose because who was “selected” for repatriation depended on the discretion of local diplomatic missions. The question of what will happen, for example, to Indian parents with dependent infants who hold foreign passports, became pertinent.

The second question that arises is associated with the health and wellbeing of those who’re returning home. A number of these Indians who were stranded abroad and have returned home have either become the carriers of this disease or developed symptoms on arriving into the country. India has already laid out a stringent set of measures to address this challenge.

The third question is a relatively complex one – how can the authorities ensure that returnees are able to reintegrate with minimum disruption & what should be done to make them a part of the Indian economy? This question is indeed a compelling one, which requires a deep understanding of the dynamics of the Indian diaspora settled abroad. Finally of course, the impact of reduced remitances needs to be addressed  Dr Arpita Mukherjee, Professor at ICRIER, comments:

There is need for policymakers to engage proactively with the destination markets and provide support to migrants in their destination countries. On its own, India should avoid protectionist policies. It is important to examine thoroughly the reasons for return migration and reduction in remittances flow and have country specific strategies.

One size does not fit all

According to the Ministry of External Affairs (MEA), approximately 50% of India’s 17.5 million international migrants are in the Gulf Cooperation Council (GCC) countries of Bahrain, Kuwait, Oman, Saudi Arabia, Qatar and the United Arab Emirates (UAE). This was fueled by the economic boom in the Gulf region coupled with the dearth of labour. Kerala is the major source region for these migrants.

The Ministry estimates that 70% of them are semi-skilled blue-collar workers while 30% are skilled white-collar professionals. These include sectors such as oil and gas, aviation, construction, tourism & hospitality and IT & ITeS.

The US is the next big destination for Indians according to the UN’s International Migrant Stock 2019, as mentioned before. In contrast to the Gulf regions, the Indian diaspora in USA enjoys the distinction of being one of the highest paid, best educated and fastest growing ethnic groups. In fact, according to data compiled by US Citizenship and Immigration Services, about two-thirds of the total 85,000 new H1B visas were bagged by Indians in FY’18 & FY’19.

Source: US Citizenship and Immigration Services

Professor Irudaya Rajan, a migration expert with the Centre for Development Studies explains:

Countries world over have started talking about visa restrictions and are shutting their borders to ‘outsiders’. Every nation wants employment opportunities to go first to locals, given the global economic crisis.

A case in point is the US and its decision to temporarily suspend new work visas at least until the end of the year, thereby barring thousands of foreigners from seeking employment in the US. Kuwait, too, has taken a similar move in the ‘interest of its citizens’. Kuwait’s National Assembly has approved the draft expat quota bill, according to which Indians should not surpass 15% of the population. This may force around 8,00,000 Indians to leave Kuwait, a nation which has a population of 4.3 million people, with 3 million of them being expats. The Indian community is estimated to constitute the largest expat community in Kuwait, totaling 1.45 million.

Clearly, a number of skilled and unskilled workers are expected to enter the country over the next few months and it is imperative that the government think of ways to include them into the Indian economy. On the brighter side, the government is mapping the skills of this diaspora under SWADES (Skilled Workers Arrival Database for Employment Support) initiative.

“The (SWADES Skill) card will facilitate a strategic framework to provide the returning citizens with suitable employment opportunities through discussions with key stakeholders including State Governments, Industry Associations and Employers,” according to a government statement. This will help bridge the demand-supply gap in the Indian job market, taking into account the lopsided nature in which these people are interspersed across Indian states.

Further, the pandemic has created new job opportunities in some sectors in the country. According to LinkedIn’s 2020 Emerging Jobs in India Report, jobs in sectors like blockchain, cybersecurity, AI, robotics, digital marketeers and engineers are selling like hot cakes. These could be promising areas for white collar workers. At the same time, reviving the economy and manufacturing sector can be the key in offering jobs to blue collar workers. The pandemic also presents the perfect ecosystem for individuals to become entrepreneurs. Prime Minister Modi’s call to become ‘Atma Nirbhar’ is a step in the right direction, for it will not only reduce the country’s import dependence, but also help generate jobs.

Another step that must be taken to address this problem is to invest in human capital. As mentioned above, the demand for software & IT-based professionals coupled with digital marketers is on the rise in the country. Programs designed for reskilling and training these individuals will make them more employable and therefore facilitate their integration into the economy. This will, in turn, help arrest the loss in international remittances to some extent.

To sum up, India faces a tough challenge in ensuring livelihood options for its returning diaspora. A multipronged strategy would be needed to resolve this issue, which entails investments in human capital, revival of productive sectors, and programs to stimulate entrepreneurship. This will not only engage those returning to their motherland from foreign countries, it will also enable India to make effective use of the strengths of its diaspora in its quest to revive economic growth.