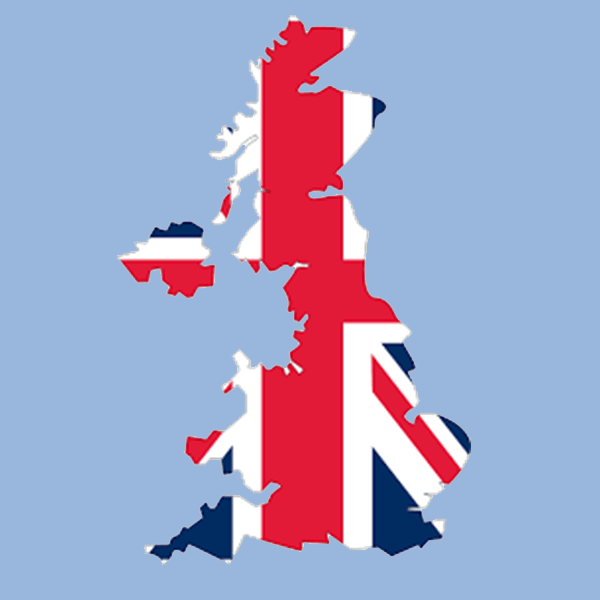 The United Kingdom – comprises of England, Scotland, Wales, and Northern Ireland – is an island nation in the North-Western Europe.

The United Nations Development Programme ranks the UK 16th in terms of Human Development Index. This rank is above the likes of France and Belgium. They are also ranked 7th in ‘Ease of Doing Business’ by World Bank with a Distance to Frontier (DTF) of 82.22.

According to IMF’s World Economic Outlook 2018, it is the 5th biggest economy in the world. The UK Office for National Statistics reports that GDP in the first quarter of 2018 was almost US $653 billion.

UK is one of the world’s biggest trade nations, according to ITC Trade Maps. In 2017, the UK imported US $640 billion of products. This was only a 1% increase from the previous year.

Its exports were over US $442 billion in value in 2017 which accounted for 2.5% of the total exports in the world.

The top trading partner of UK was Germany, followed by United States of America and China. India ranks 19th in the list of UK’s largest trading partner in 2017, with a trade surplus of US $3.9 billion due to huge imports by UK. 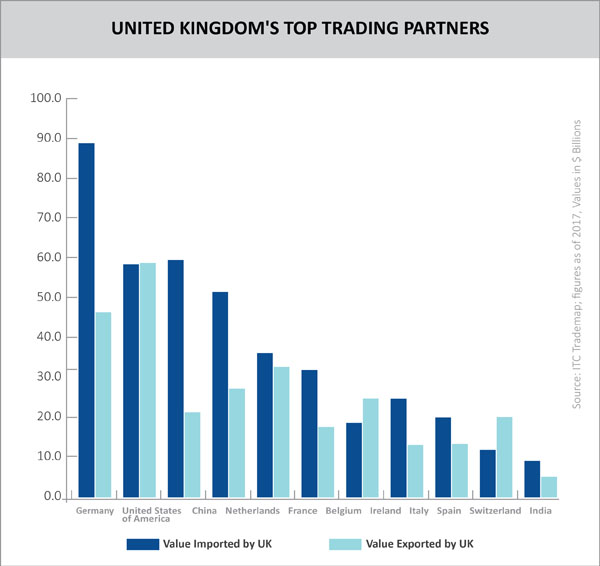 UK’s exports from the world have followed its path of imports throughout, as can be seen in the graph below. The country has maintained a trade deficit throughout the past decade. In 2017 it had a trade deficit of US $199.3 billion, witnessing the highest deficit in 2016 of more than US $225 billion. 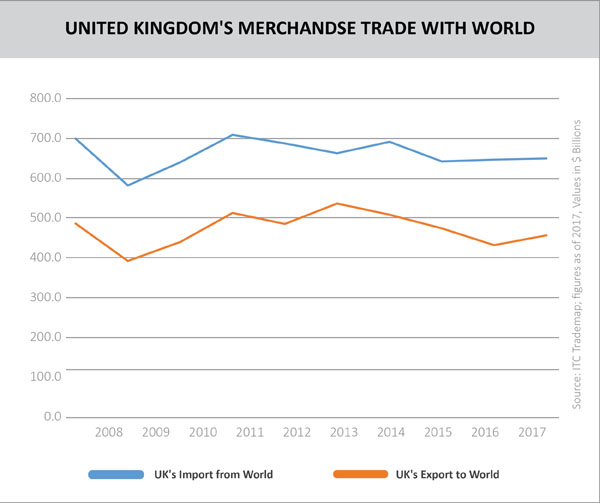 India’s import from UK has witnessed a continuing decline in the past decade. It lies well below its exports to the country, thus enjoying huge trade surplus with the United Kingdom. India recorded highest trade surplus with UK in 2014 of more than US $4.8 billion. 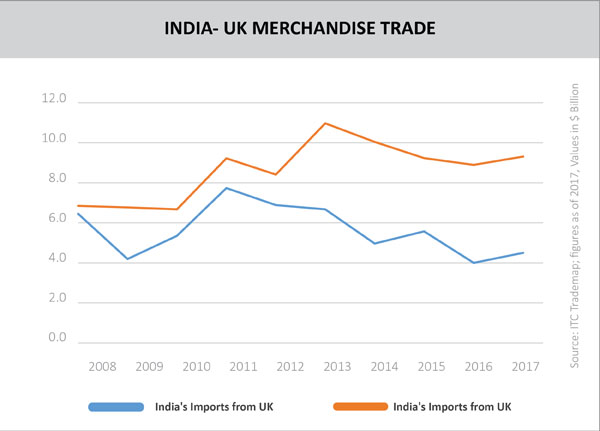 UK’S EXPORTS TO THE WORLD

UK’s total export in 2017 amounted to US $442.1 billion. Its top export product at HS-6 digit level last year was Crude Oil, Gold, Medicaments, Motor Cars and Parts of aeroplanes with a total top 5 share of 18.6% in its export basket. 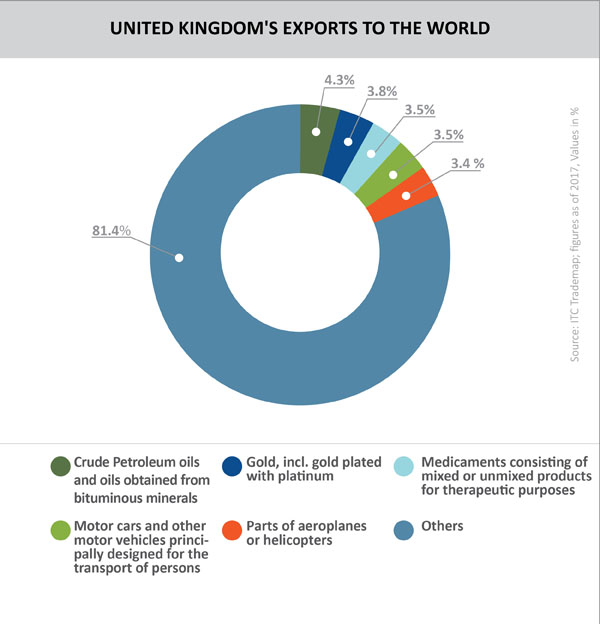 UK’S IMPORTS FROM THE WORLD

UK’s import basket resembles its export basket with continued domination by products like Gold, Crude Petroleum, Motor Cars, Medicaments and Medium Oils which together made up Top 5 imports of UK with a 15.7% share in its total imports (US $640.4 Billion) at HS-6 digit level. UK’s heavy dependence on imports is visible with its very high trade deficit levels. 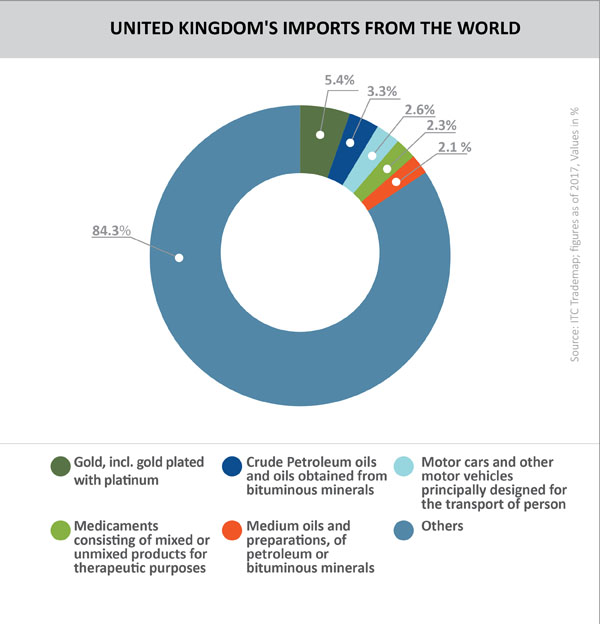 India’s total exports to UK amounted to US $9 billion in 2017. Its top three exports at HS-6 digit level were Medicaments (US $342.3 million), Articles of jewellery and parts thereof (US $236 million) and Parts of aeroplanes or helicopters (US $200 million). 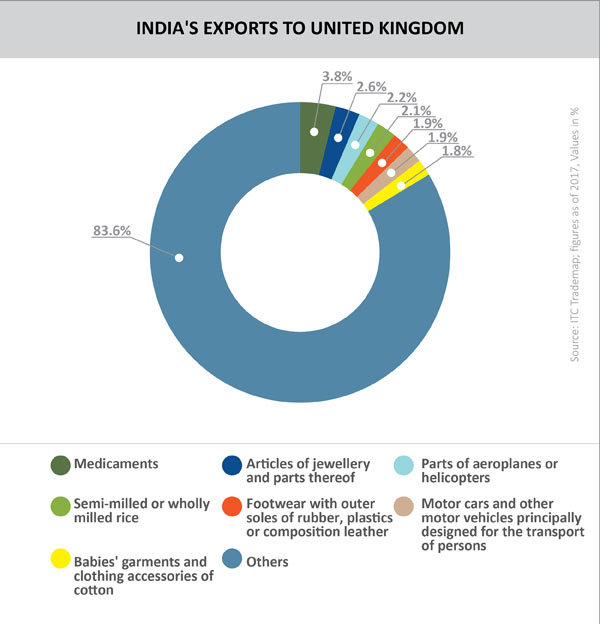 India’s total imports from UK in 2017 were US $4.3 billion, leading India to have a huge trade surplus with the United Kingdom. India’s import was dominated by Silver (US $305.6 million) and Waste and scrap, of aluminium (US $251.1 million). 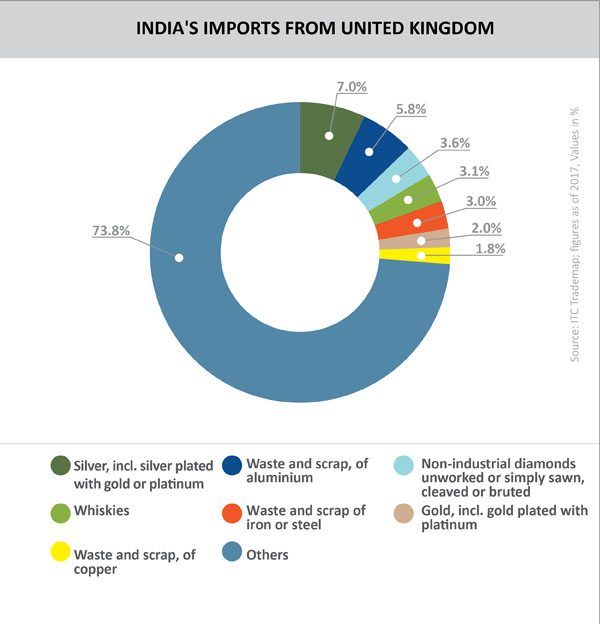 While UK-India trade grew strongly since the start of the century, greater efforts need to be made to re-set the bilateral trade relationship. This needs to be a joint effort between businesses and the governments. There is enormous potential, in both directions, given the close and frequent political engagement, a common language, similar legal systems, and frequent business delegations. A further reason to have high ambitions is the strong complementarity between the UK and Indian economies, and the fact that both are large and growing markets

India is the third largest foreign investor in the UK, while UK ranks third after United States and Japan as an investor in India. The growth of India’s multinational companies contribute greatly to UK’s business and economy.

Currently there are many bilateral trade agreements between the two nations designed to strengthen the bilateral ties.

To improve the bilateral trade a re-examination of what constitutes trade and investment; close involvement and consultation with UK and Indian businesses; analysis of why UK-India trade in the top 5 imported/exported goods of each country is so low; development of the UK’s Department for International Trade’s Export Opportunities programme which identifies opportunities in India for UK exporters and then connects these potential exporters to the Indian business that is looking to import; and a similar Export Opportunities programme by the Government of India should be introduced to showcase to Indian businesses the opportunities to sell to the UK.