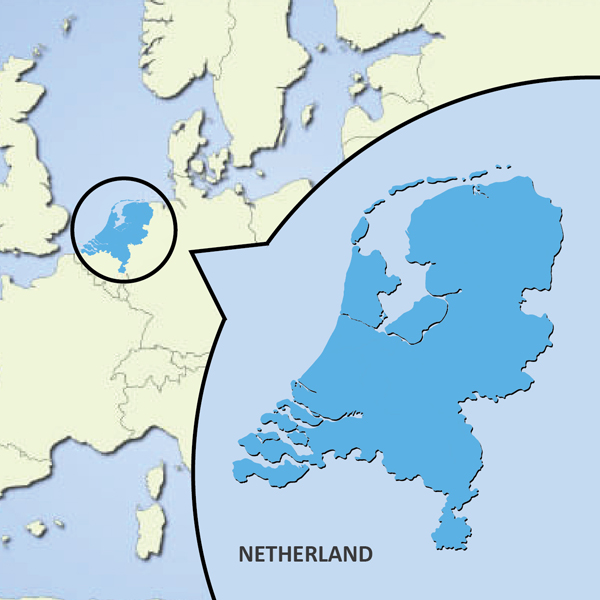 Located in the North-Western Europe, The Netherlands is actually a kingdom which also consists of the Islands of Bonaire, Sint Eustatius and Saba apart from the Netherlands.
The United Nations Development Programme ranks Netherlands 10th in terms of Human Development Index. It is ranked 32nd in ‘Ease of Doing Business’ by World Bank with a 1st rank in trading across borders and 8th in resolving insolvency.
The Netherlands reported a GDP of US$ 830 billion in the year 2017, registering a GDP growth rate of 2.9%.

TRADE STATISTICS
In 2017, the Netherlands imported US $450 billion worth of goods. Its exports were over US $506 billion in value in 2017 which accounted for 2.6% of the total exports in the world. As per ITC trade map, Netherlands ranks 7th among the top world exporters; this list is led by China.
The top trading partner of Netherlands was Germany, followed by Belgium and United Kingdom. India does not rank in the list of top 10 trading partners of Netherlands, but has a significant trade with Netherlands with an export of US$ 5.4 billion, while import by India from Netherlands was at US$ 2.3 billion, resulting into a trade surplus of US$ 3.1 billion in favour of India. 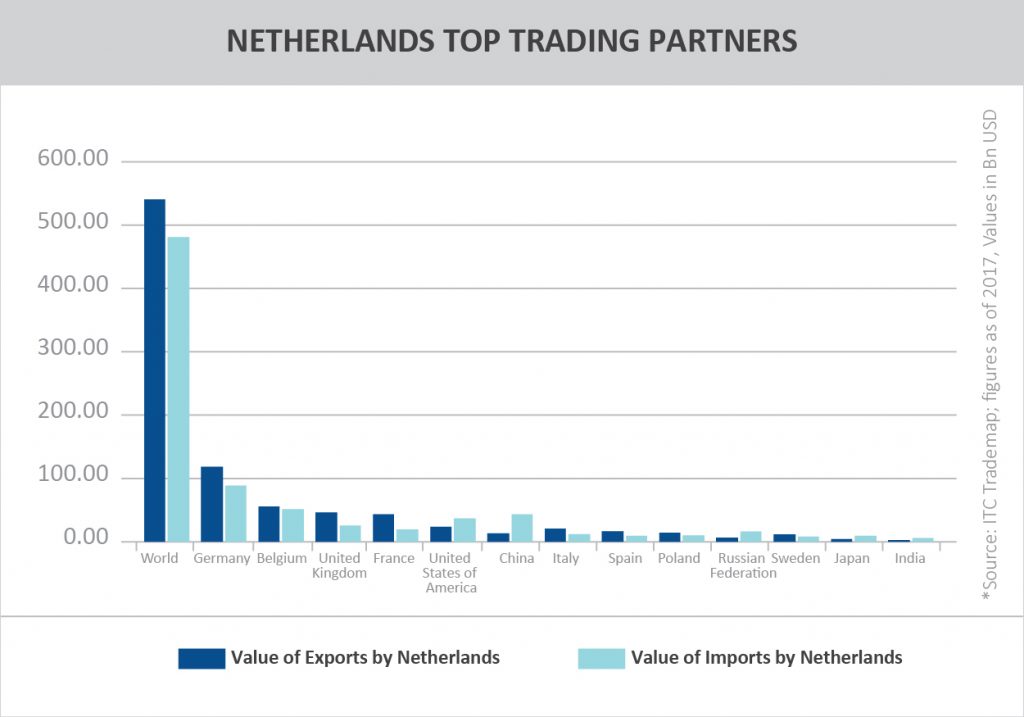 NETHERLANDS’ MERCHANDISE TRADE WITH WORLD
Netherlands’ exports from the world have followed its path of imports throughout, as can be seen in the graph below. The country has maintained a trade surplus throughout the past decade. In 2017 it had a trade surplus of US $55.8 billion, the trade balance is positive but doesn’t follow an increasing trend. In the last 10 years, trade surplus was highest in the year 2013 at US$ 65 billion; it has consistently declined since then. 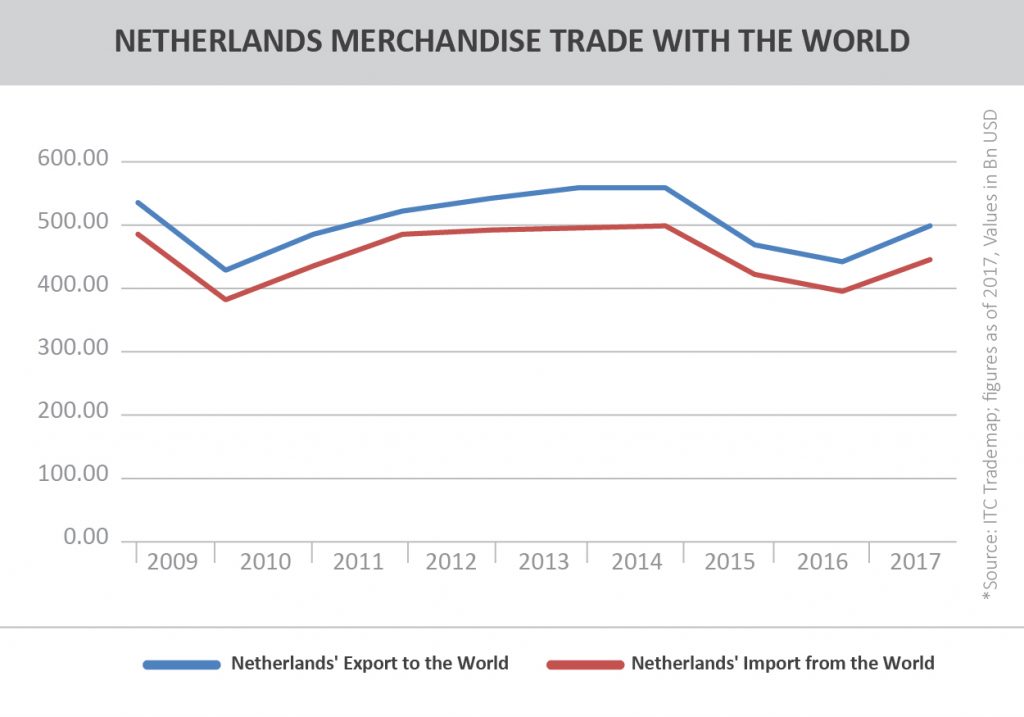 NETHERLANDS’ EXPORTS TO THE WORLD
Netherlands’ total export in 2017 amounted to US $505.9 billion. Its top export product at HS-6 digit level last year was Medium Oils, Light Oils, Medicaments, Machines for the reception, conversion and transmission or regeneration of voice and images and Parts and accessories of automatic data-processing machines with a total top 5 share of 15% in its export basket. 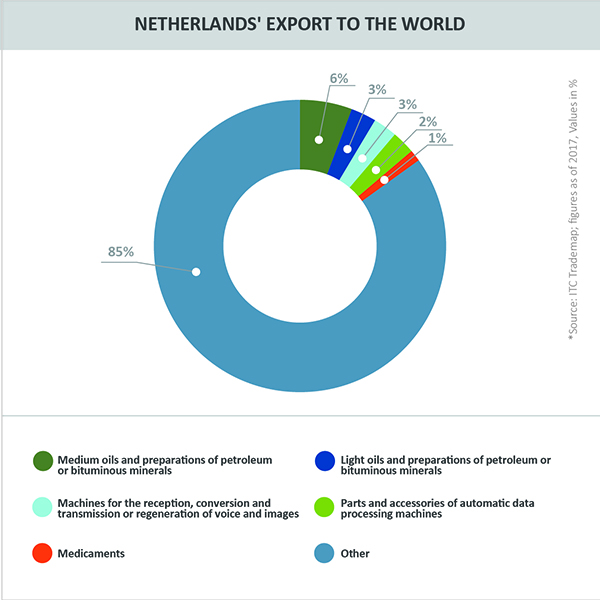 NETHERLANDS’ IMPORTS FROM THE WORLD
Netherlands’ import basket resembles its export basket with continued domination by products like Light Oils, Medium Oils, Medicaments and Machines for the reception, conversion and transmission or regeneration of voice and images apart from Crude petroleum oil which together made up the Top 5 imports of Netherlands with a 17% share in its total imports (US $450.0 Billion) at HS-6 digit level. 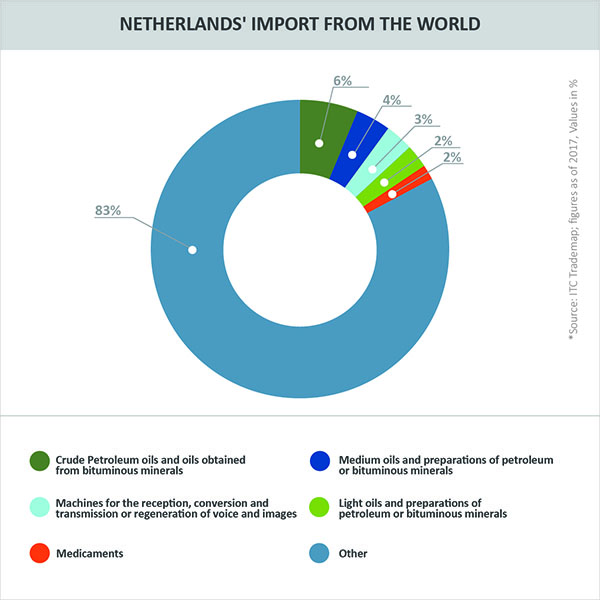 INDIA-NETHERLANDS MERCHANDISE TRADE
India’s import from Netherlands has remained approximately steady in the range of US$ 2.7 to 1.7 billion. No clear trend is discernible. Imports lie well below India’s exports to Netherlands, thus enjoying huge trade surplus with the Netherlands. India recorded highest trade surplus with Netherlands in 2011 of more than US $7.5 billion. 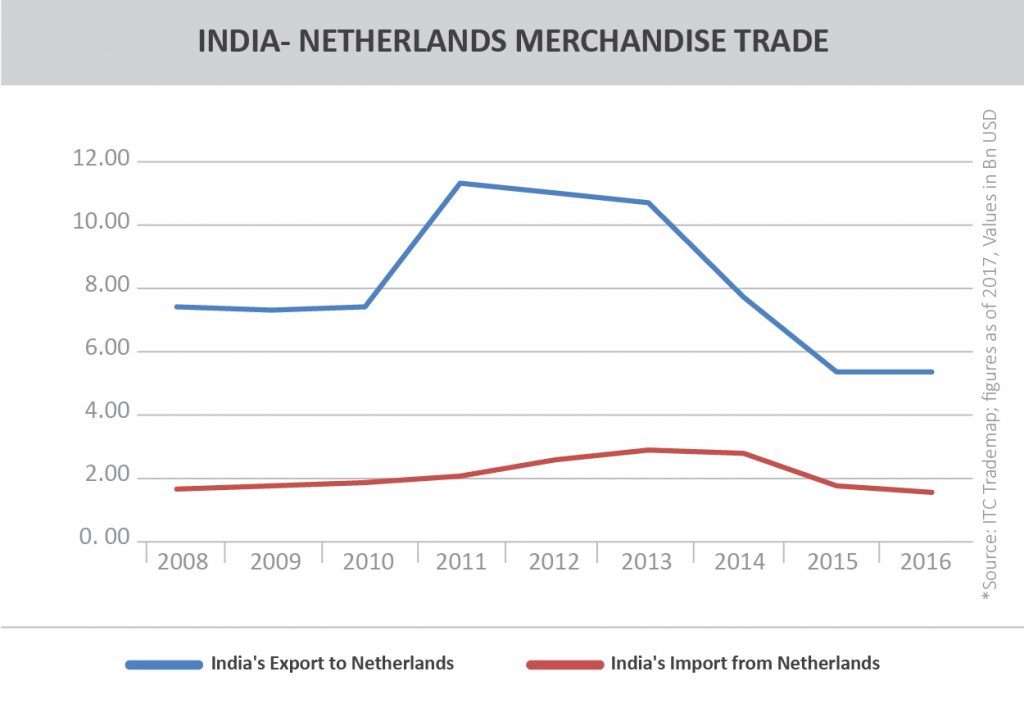 INDIA’S EXPORTS TO NETHERLANDS
India’s total exports to Netherlands amounted to US $5.4 billion in 2017. Its top five exports at HS-6 digit level were Medium oils and preparations (US $1.4 billion), Castor oil and fractions (US $127 million), Frozen shrimps and prawns (US $105 million), Fresh grapes (US $92 million) and Fresh or dried cashew nuts(shelled) (US $82 million). 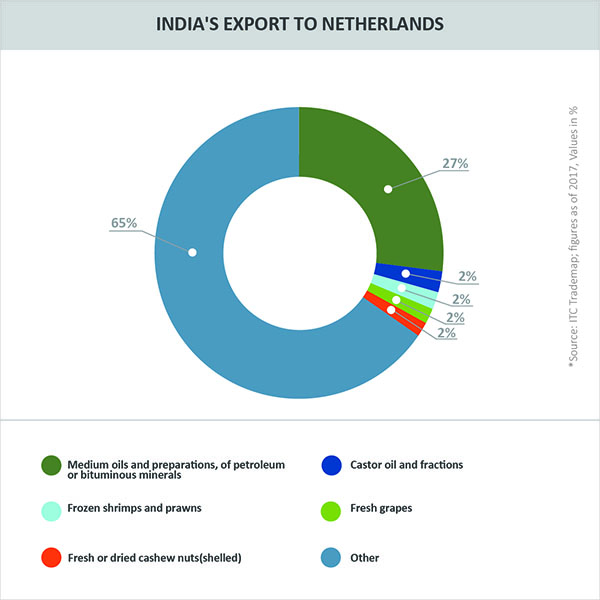 INDIA’S IMPORTS FROM NETHERLANDS
India’s total imports from Netherlands in 2017 were US $2.3 billion. India’s import was dominated by Dredgers (US $347.3 million), Waste and scrap of stainless steel (US $106.4 million), Waste and scrap of aluminium (US $99.3 million), Reaction initiators, reaction accelerators and catalytic preparations (US $59.6 million) and crude oil (US $57.1 million). 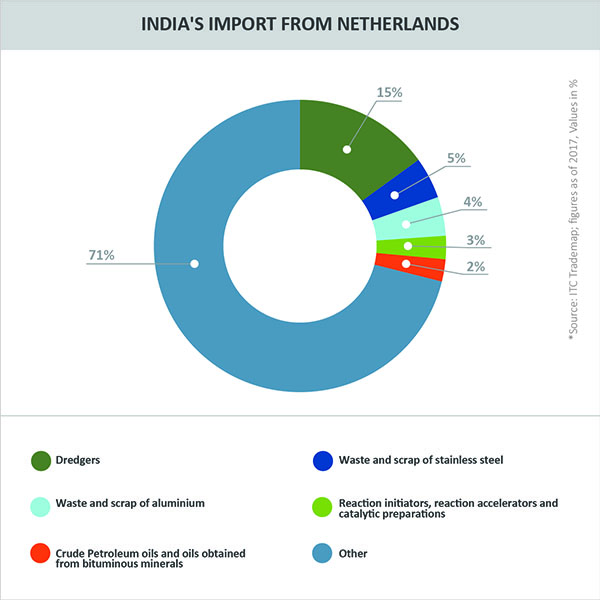 While Netherlands-India trade grew strong since the start of the century, but greater efforts needed to double the bilateral trade between India and Netherlands. There is an enormous potential, in both directions, given the close and frequent political and business engagement.
The Netherlands has attracted most of the outward foreign direct investments from India. It has become the new gateway to Europe. Indian corporations are increasingly looking at expanding their global footprint by investing overseas; the business friendly climate of the Netherlands has led to increase in the total Indian foreign investments in the Netherlands amounting to $2.9 billion.
Netherlands is the 5th largest investment partner globally. It has also emerged as the 3rd largest source of FDI for India. Currently there are many bilateral trade agreements between the two nations designed to strengthen the bilateral ties e.g. tax treaty.
In order to better utilise the cordial relationship, India needs to diversify its engagement with the Netherlands to other sectors such as agricultural waste technology, water treatment technology and clean energy in which the Netherlands is a world leader.

Enquiry for Country Profile- The Netherlands