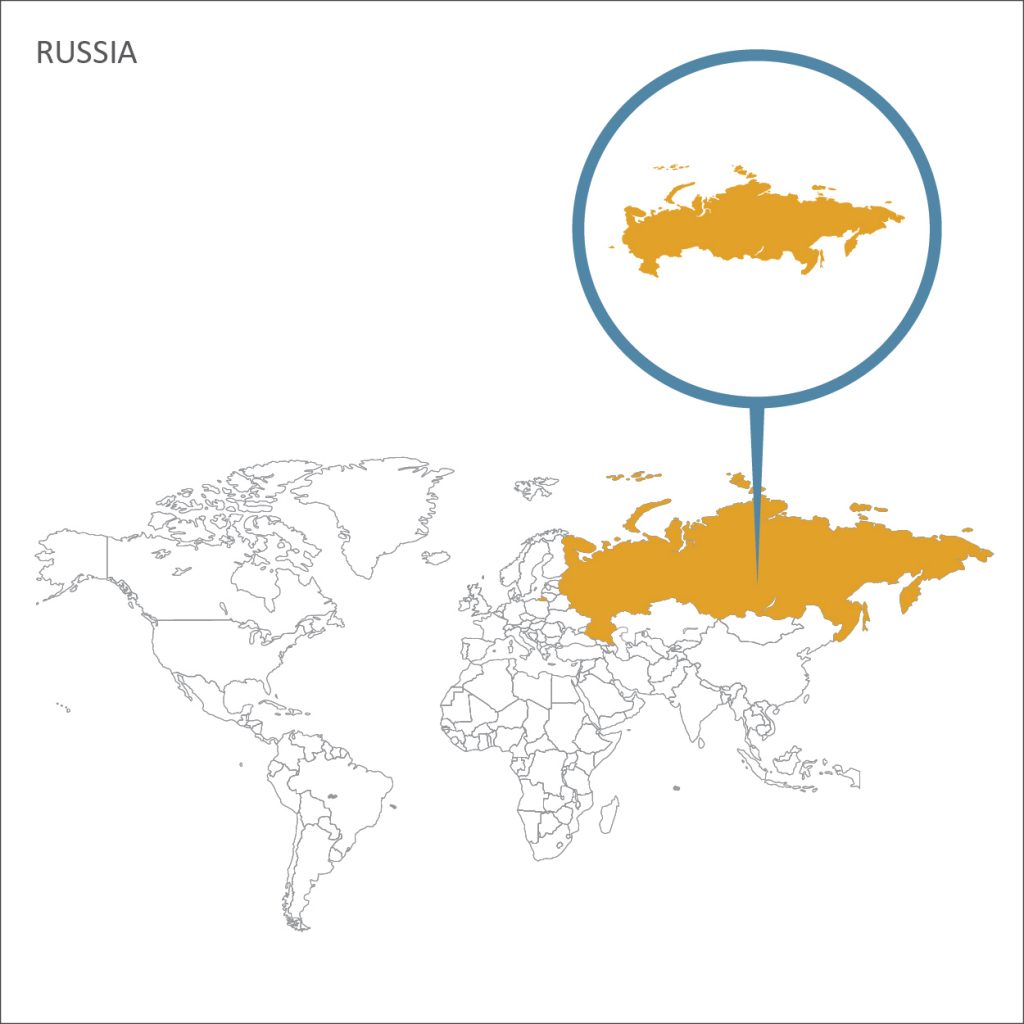 Russia is located in both Asia and Europe, it is a transcontinental country. Its major part lies in Asia. It is the world’s largest country in terms of area.

The United Nations Development Programme ranks Russia 59th in terms of Human Development Index with the value of 0.816. It is ranked 31st  in ‘Ease of Doing Business’ by World Bank released in 2018 with 9th rank in property registration and 12th rank in enforcing contracts.

The top trading partner of Russia is China, followed by Netherlands and Germany. India does not rank in the list of top 10 trading partners of Russia, but has a significant import from Russia of worth US$ 7.99 billion and an export value of US$ 2.14 billion from India to Russia, resulting into a trade deficit of US$ 5.85 billion for India. 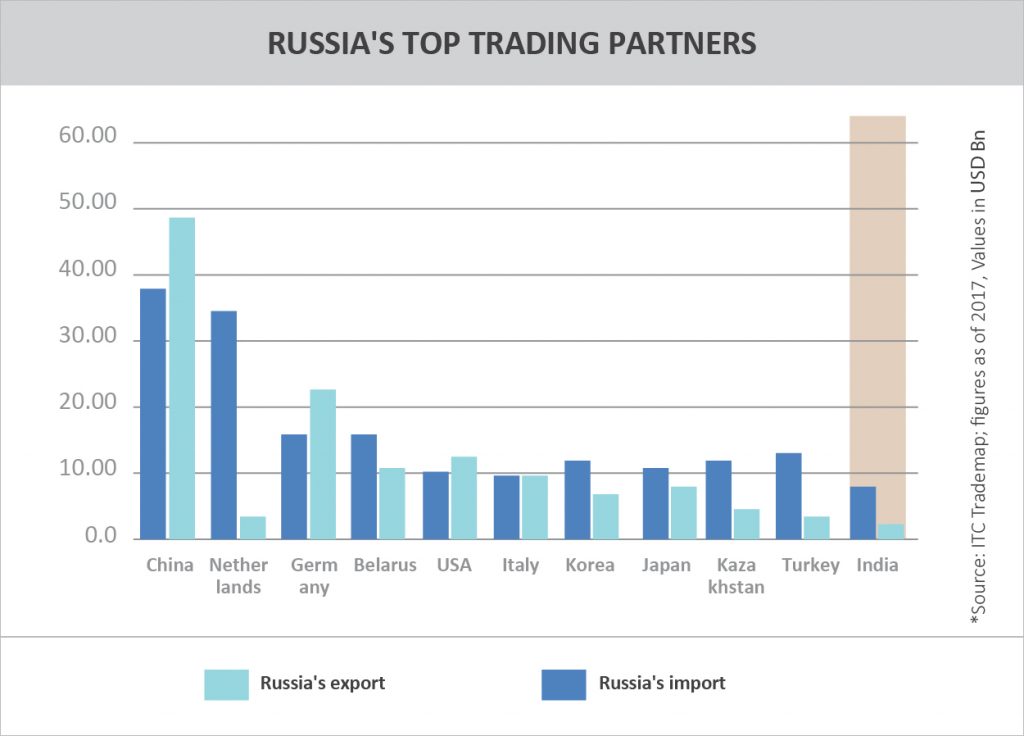 Russia’s exports to the world have followed its path of imports throughout, as can be seen in the graph below. The country has maintained a trade surplus throughout the past decade.  In 2017 it had a trade surplus of US $ 130.94 billion. In the last 10 years trade surplus was highest in the year 2013 at US$ 212.32 billion. 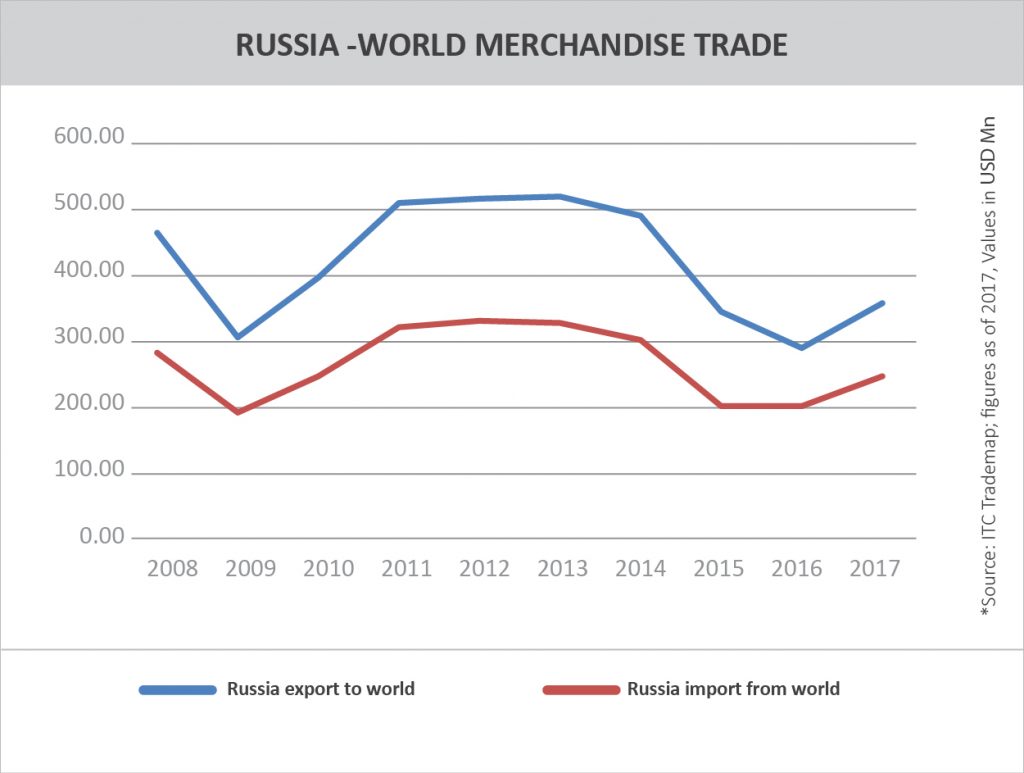 RUSSIA’S EXPORT TO THE WORLD 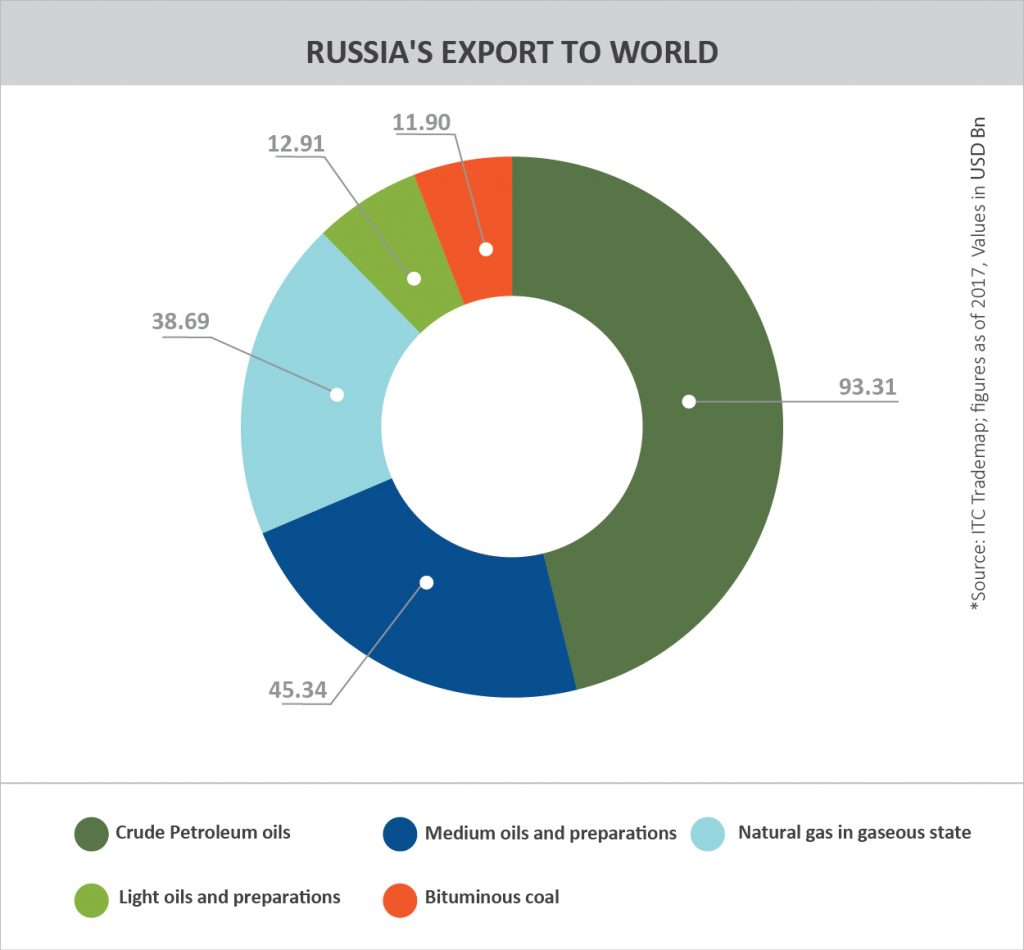 RUSSIA’S IMPORTS FROM THE WORLD

Russia’s import basket is primarily led by Medicaments, Telephones for cellular networks, Aeroplanes and other powered aircraft, Machinery for liquefying air or other gases and Motor cars and other motor vehicles which together make up the Top 5 imports of Russia. The import basket is diversified. 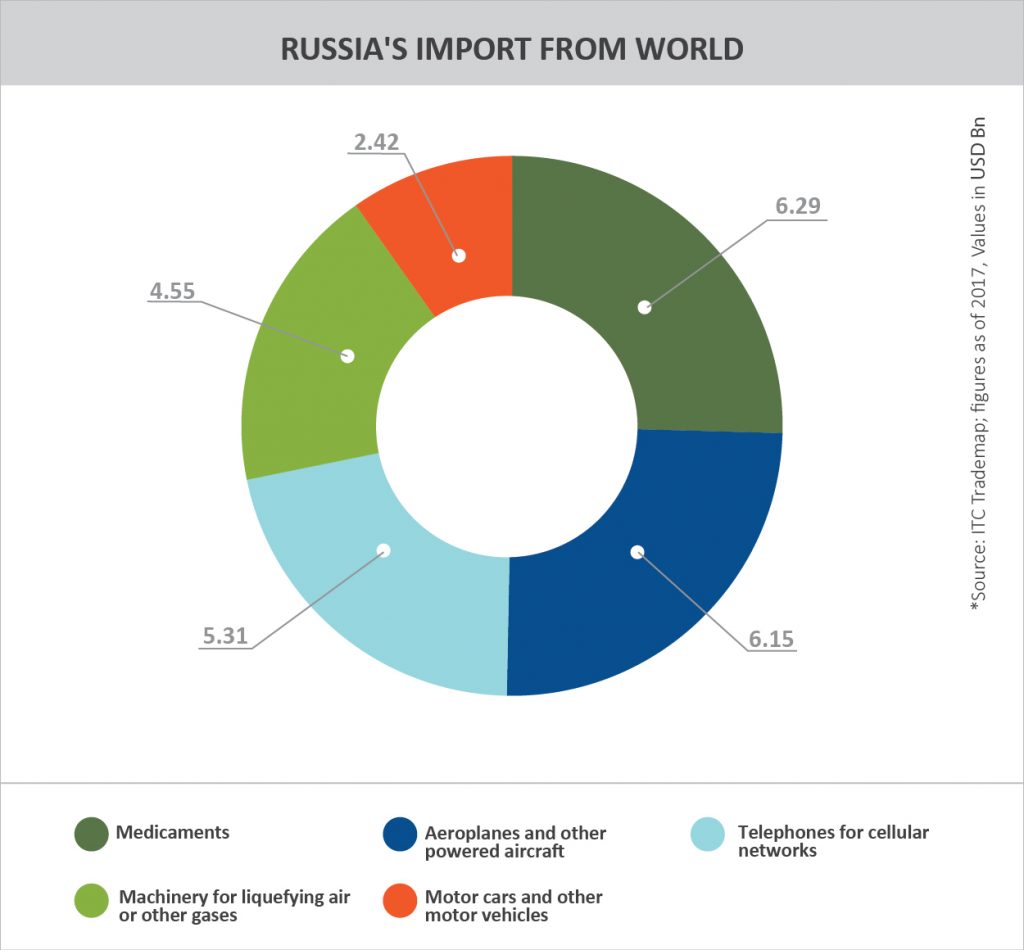 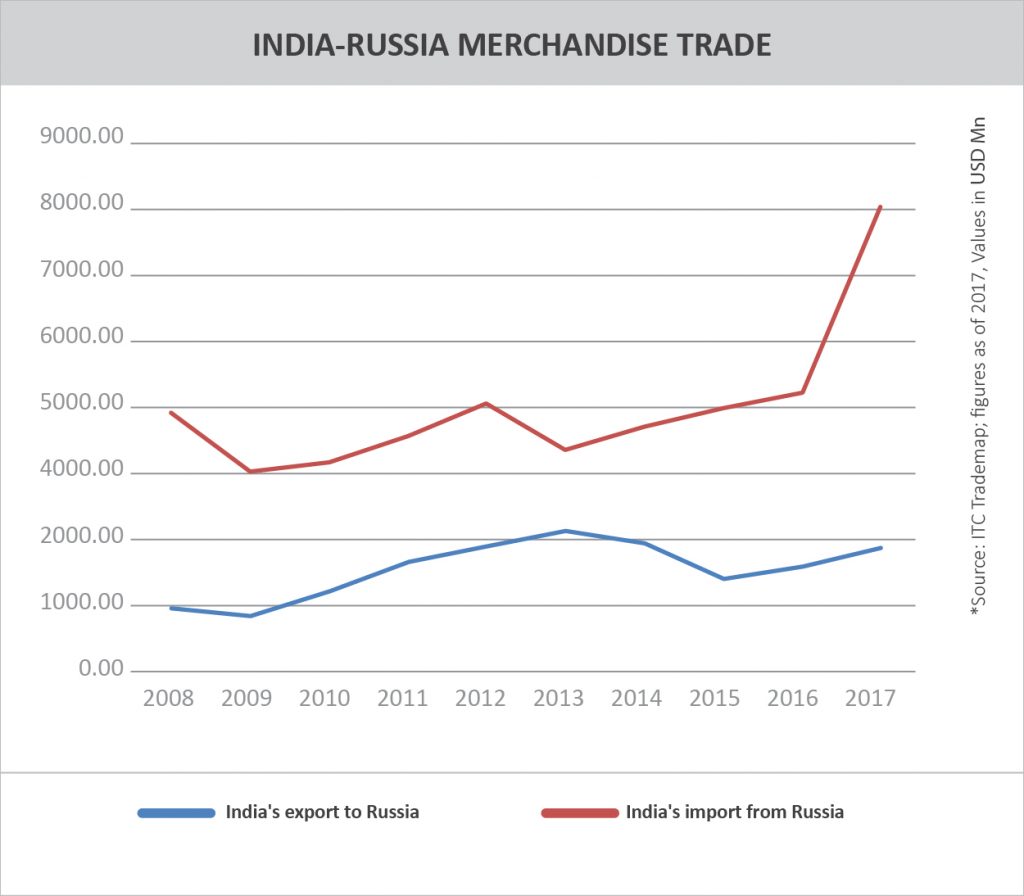 India’s total exports to Russia amounted to US $ 2.14 billion in 2017. Its top five exports at HS-6 digit level were Medicaments, Tea, Coffee extracts, Parts of aeroplanes or helicopters and frozen shrimps and prawns. 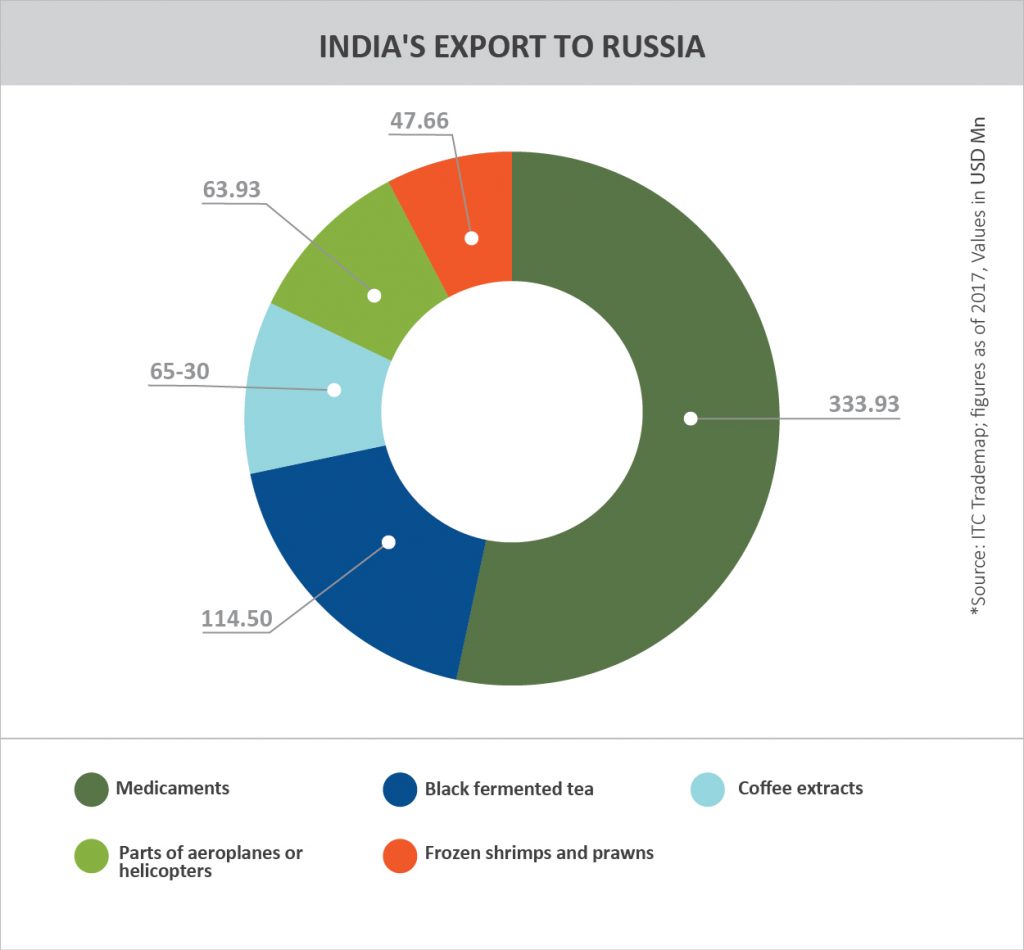 India’s total import from Russia in 2017 was US $ 7.89 billion. India’s import was dominated by Unworked diamond, Crude Petroleum oils, Unwrought silver, Coal, Newsprint in rolls of a width > 36 cm and Potassium chloride for use as fertiliser. The import basket of India for the products imported from Russia is highly skewed, such that the top 5 products amount to 71 % of total imports by India from Russia. 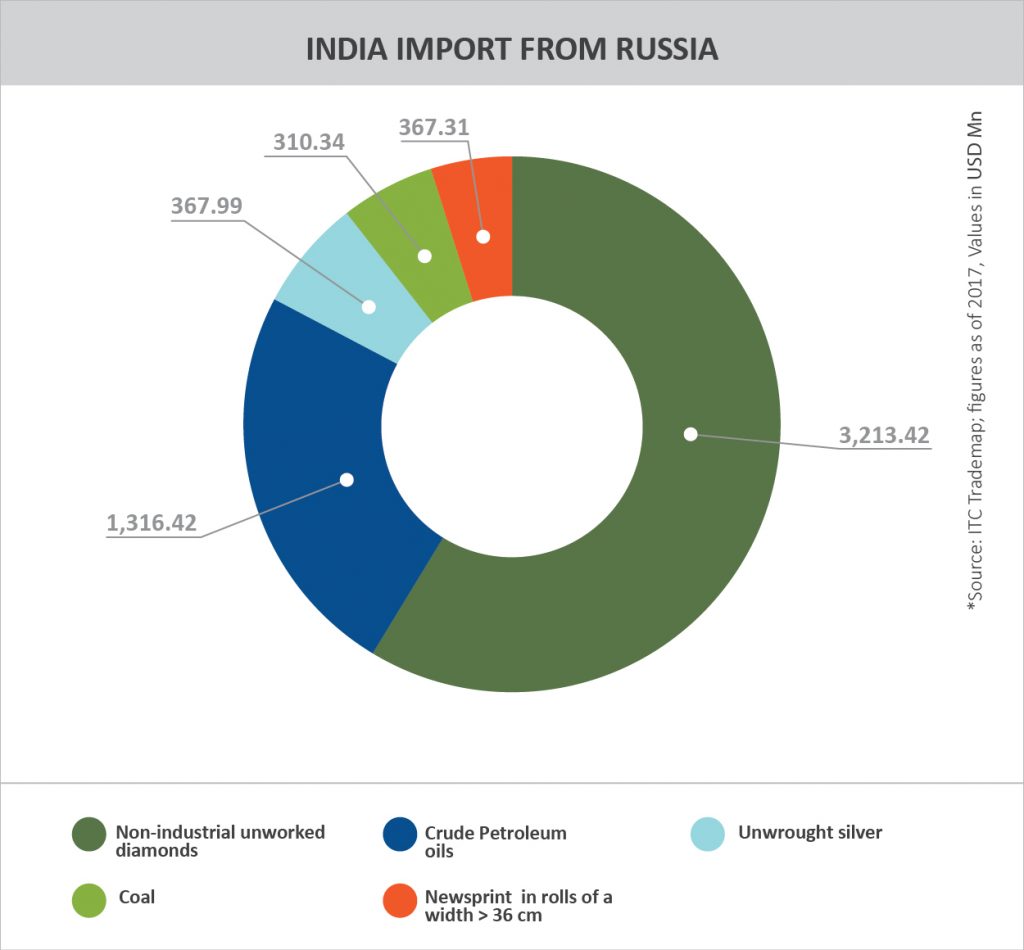 India-Russia share a very special political and economic relationship. Apart from energy diplomacy, the economic relationship between the two nations is majorly dependent on two commodities diamond and Petroleum oil with two signing numerous pacts on the same. Besides the traditional source of energy the two nations are also collaborating on clean nuclear energy since Russia is endowed with large nuclear reserves and India is a large energy consumer. As per InvestIndia, Russia has invested US$ 1.2 billion from 2000 to 2018, with key investment areas being oil & gas, aerospace, defence and financial services. The bilateral trade between India and Russia is targeted to reach US$ 30 billion by the year 2025 and the level of mutual investments is expected to reach US$ 15 billion by 2025. Both nations have sought to establish extensive collaboration and commerce in field of infrastructure, information technology, space research and defence technology.