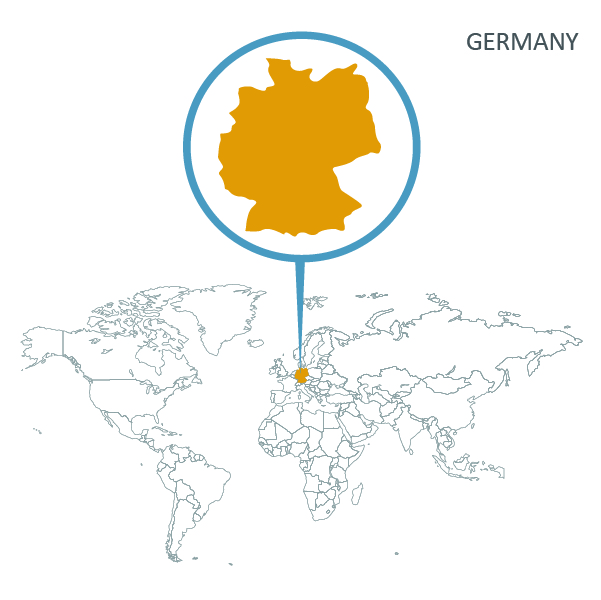 Germany is located in the Centre-Western Europe. It is one of the most populous countries in the European Union.
The United Nations Development Programme ranks Germany, 5th in terms of Human Development Index with the value of 0.936. It is ranked 20th in ‘Ease of Doing Business’ by World Bank with 5th rank in getting electricity and 4th in resolving insolvency.
As per World Economic Outlook Database, 2018 estimate Germany is ranked 5th in world in GDP in PPP terms at a value of US$ 4.3 trillion while ranked 4th in GDP in nominal terms at a value of US$ 4.2 trillion. The per capita GDP of Germany in PPP terms is estimated to be US$ 52801 and in nominal terms it is estimated to be US$ 50841 in 2018 by World Economic Outlook Database.

In 2017, Germany imported US $1.17 trillion worth of goods. Its export was over US $ 1.45 trillion in value in 2017 which accounted for 8.2 % of the total exports in the world. As per ITC trade map Germany ranks 3rd among the top world exporters, list is led by China.
The top trading partner of Germany was China, followed by USA and France. India does not rank in the list of top 10 trading partners of Germany, but has a significant trade with Germany with an export by India to Germany of US$ 8.2 billion, while imports by India from Germany was at US$ 12.6 billion, resulting into a trade deficit of US$ 4.4 billion for India. 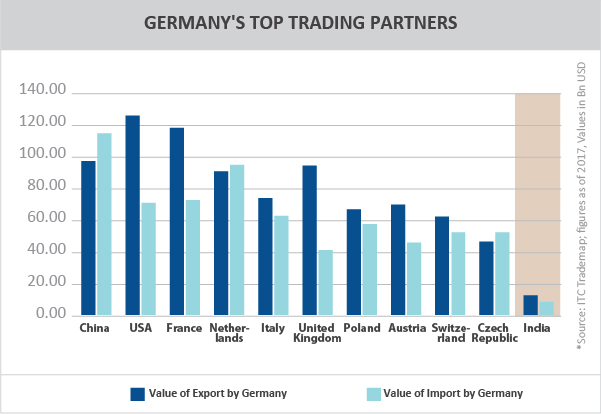 Germany’s exports from the world have followed its path of imports throughout, as can be seen in the graph below. The country has maintained a trade surplus throughout the past decade. In 2017 it had a trade surplus of US $ 276.5 billion, the trade balance is positive but doesn’t follow an increasing trend. In the last 10 years trade surplus was highest in the year 2014 at US$ 283.2 billion, it has remained steady on an average throughout the decade. 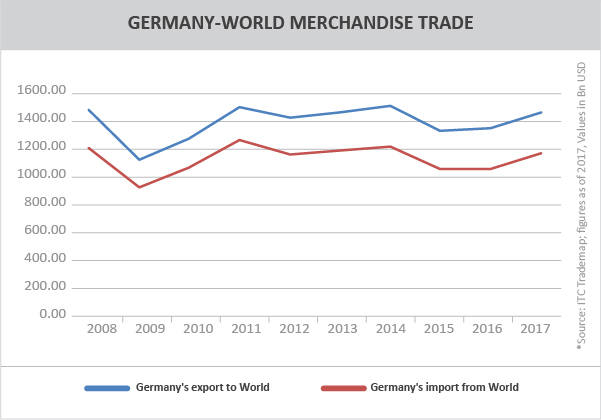 GERMANY’S EXPORT TO THE WORLD

Germany’s total export in 2017 amounted to US $1.45 trillion. Its top export product at HS-6 digit level last year was motor cars and its parts, immunological products, aeroplanes and its parts and medicaments with a total share of 13% of the top 5 products in its export basket. 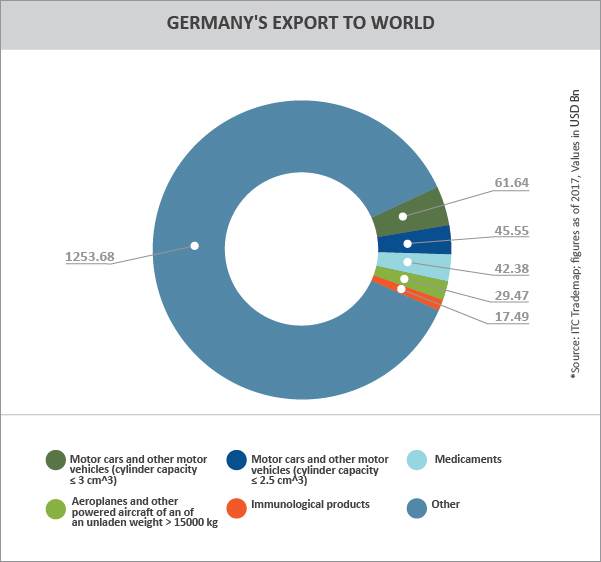 GERMANY’S IMPORT FROM THE WORLD

Germany’s import basket is primarily led by crude petroleum oil, Natural gas, Medium oils, Motor cars and its parts and Medicaments which together made up the Top 5 imports of Germany with a 10% share in its total imports (US $ 1.17 Trillion) at HS-6 digit level. 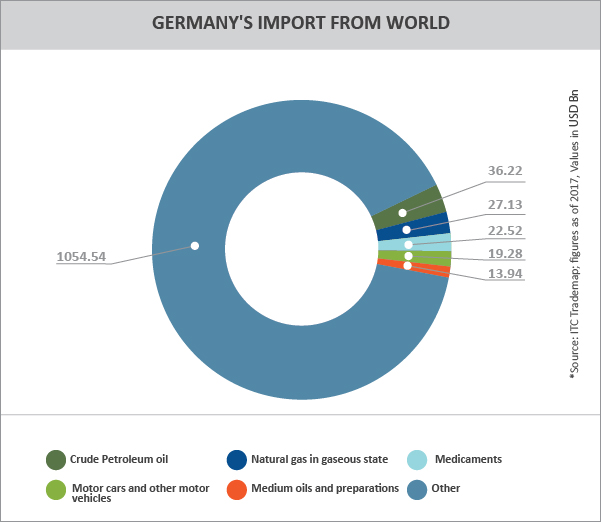 India’s trade balance with Germany saw an (negative) upward trend till 2012 reaching a deficit of US$ 7.6 billion, declining since then. In the last decade it primarily stayed in the range of US$ 7.6 to 4.3 billion. India’s export and import followed a similar trend year on year in the last decade barring 2012 in which export from India to Germany saw a dip. 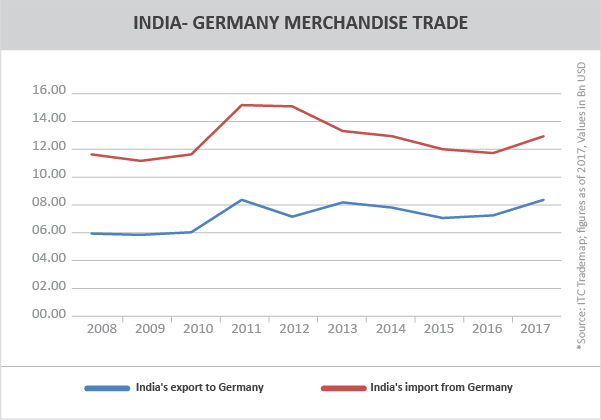 India’s total exports to Germany amounted to US $ 8.2 billion in 2017. Its top five exports at HS-6 digit level were turbojets, motor vehicles and parts, t-shirts, singlet, other cotton vests, footwear and with outer soles of plastic or rubber and parts of tractors and motor vehicles. It amounts to 14% of the total export to Germany from India. 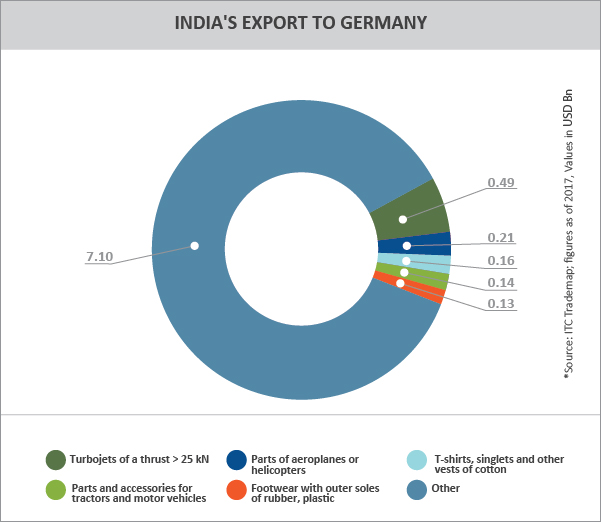 India’s total import from Germany in 2017 was US $ 12.6 billion. India’s import was dominated by Aeroplanes and parts, motor vehicle and parts, surgical and medical instruments, static convertors and parts of tractors and other appliances. The import basket of India for the products imported from Germany is highly diversified, such that the top 5 products amount to just 8% of total imports by India from Germany. 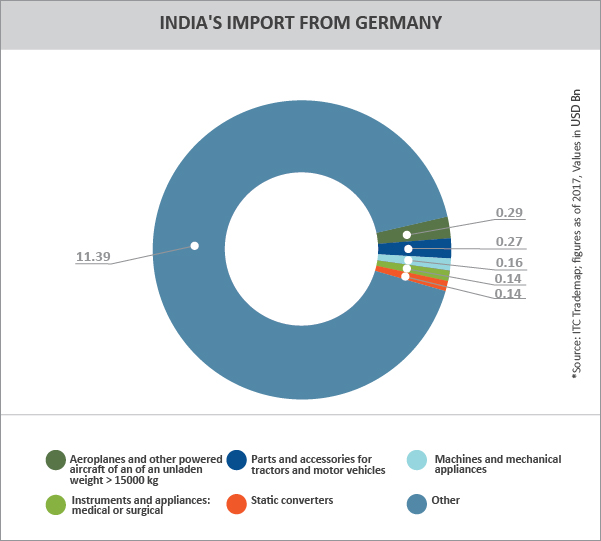 Germany is India’s largest trading partner in Europe. As per MOCI report 2012-13, Germany ranks 9th among India’s 10 top trading partners, with accumulated FDI by Indian companies in Germany exceeding 6 billion Euros. Germany is the 8th largest foreign direct investor (FDI) in India. Approximately, 17% of India’s total outward foreign direct investment (FDI) projects in Europe flowed to Germany, between the years 2010 to 2016. Indian investors appreciate Germany’s high-quality infrastructure, business friendly governance, favourable R&D and innovation environment, political stability, and the workforce’s high skill and educational levels. Britain’s exit from European Union has increased Germany’s importance as a gateway to Europe.
The signing of Agenda for Indo-German Partnership in early 2000s and later in 2007 a Joint Statement on the Further Development of the Strategic and Global Partnership between Germany and India cemented the India-Germany relations.
Greater push for technology transfer and emulation of the successful SME model of Germany may further boost the role of Germany in India’s economic growth.

0
Reply
Most Popular
Editor's Pick
India and the FTAs: Heralding hope and harnessing opportunities
India: The hottest market for carbon trade?
Negotiating the Rules-of-Origin (RoO) in trade agreements
Labour Codes & the future of agile workforce in India
Shaping the future of India’s Exports
View All
Shaping the future of India’s Exports
Agrarian Society in Pursuit of Prosperity
National Logistics Policy must include components on green hydrogen economy
India and Romania: Advancing synergies
Is national monetisation of assets essential?
View All
TPCI Latest Activities