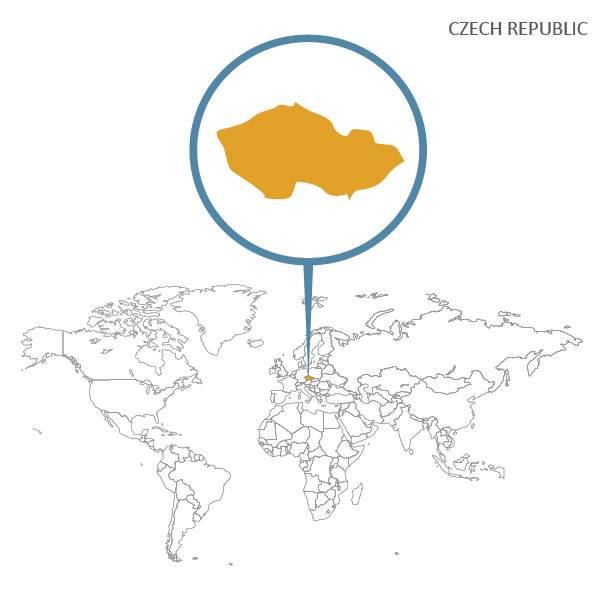 Czech Republic is located in the Central Europe and is a landlocked country and recognised as a manufacturing powerhouse. It is an export led economy.

The United Nations Development Programme ranks Czech Republic 27th in terms of Human Development Index with the value of 0.888. It is ranked 35th in ‘Ease of Doing Business report’ 2019 by World Bank with 1st rank in trading across borders. As per World Economic Outlook Database, 2018 estimate Czech Republic is ranked 50th in world in GDP in PPP terms at a value of US$ 368.7 billion while ranked 49th in GDP in nominal terms at a value of US$ 238.0 billion. The per capita GDP of Czech Republic in PPP terms is estimated to be US$ 36784 and in nominal terms it is estimated to be US$ 22468 in 2018 by World Economic Outlook Database. 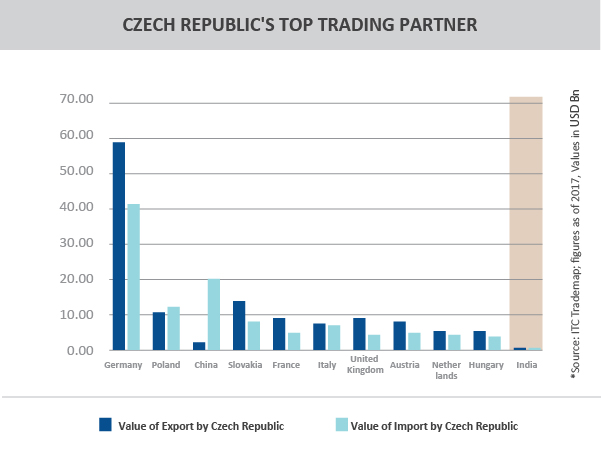 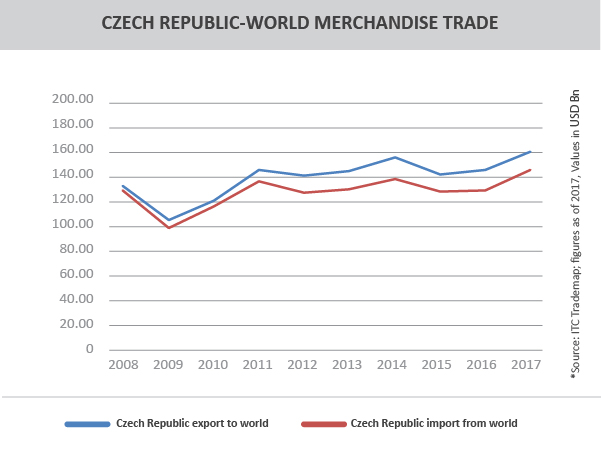 CZECH REPUBLIC’S EXPORT TO THE WORLD

Czech Republic’s total export in 2017 amounted to US $180.01 billion. Its top export products at HS-6 digit level last year were Motor cars and its parts under different heads of HS code 87, automatic data-processing machines and telephones for cellular networks. More than 21% of Czech Republic’s total export is motor vehicle, cars and related parts, making it one of the biggest exporter of the same. 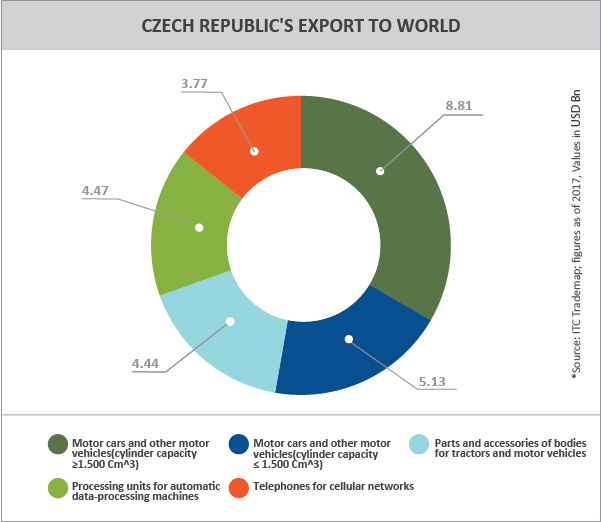 CZECH REPUBLIC’S IMPORTS FROM THE WORLD

Czech Republic’s import basket is primarily led by Telephones for cellular networks Crude petroleum oil, Data-processing machines, Medicaments and Electronic integrated circuits which together made up the Top 5 imports of Czech Republic.(Total imports – US $ 162.06 billion) at HS-6 digit level. 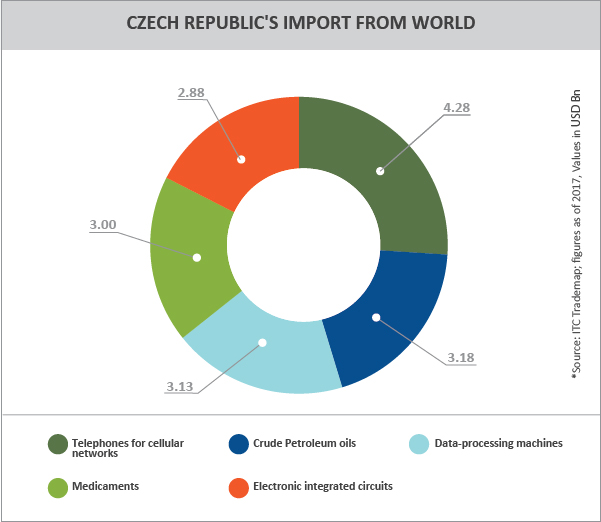 India’s trade balance with Czech Republic in the past decade may be divided into 3 phases – pre 2016, 2016 and post 2016. Till 2015, trade balance was negative i.e. there was a huge trade deficit till 2015 for India vis a vis Czech Republic. In this phase it primarily saw an (negative) upward trend till 2011 reaching a deficit of US$ 462.0 million, declining since then, till 2015. In 2016, India had a trade surplus with Czech Republic of US$ 4.8 million. Again in 2017 trade deficit plummeted to US$ 237.2 million for India vis a vis Czech Republic. India’s export and import followed a ‘scissor’ shaped trend year on year in the last decade conjoining in the year 2016. 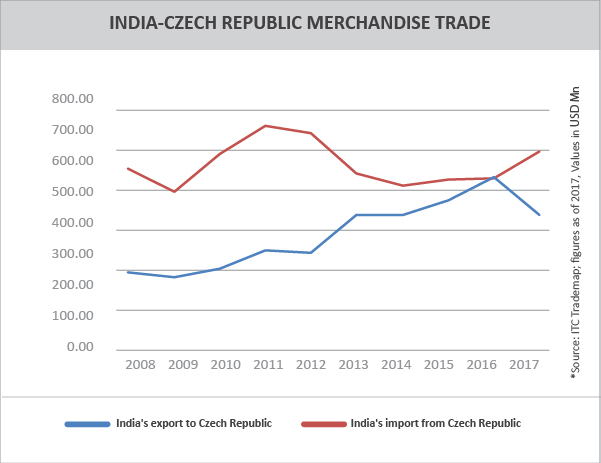 India’s total exports to Czech Republic amounted to US $ 393.5 million in 2017. Its top five exports at HS-6 digit level were Medicaments, Cast articles of iron or steel, Engines and motors, Parts and accessories for tractors and Men’s or boys’ shirts of cotton. It amounts to 29% of the total export to Czech Republic from India. 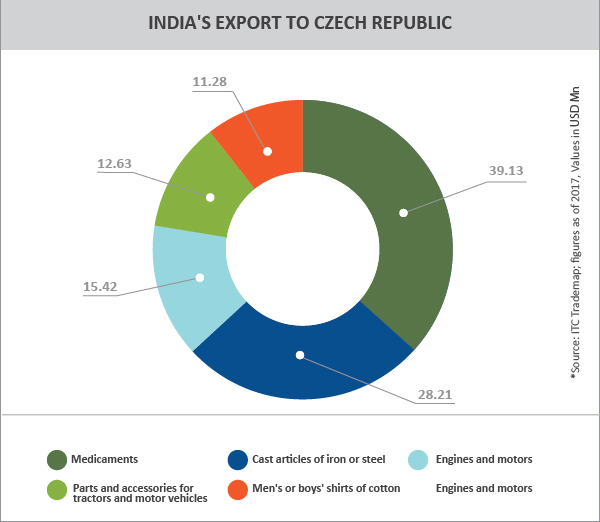 India’s total import from Czech Republic in 2017 was US $ 630.8 million. India’s import was dominated by Gear boxes and parts, Parts and accessories for tractors and motor vehicles, Spark-ignition reciprocating piston engine, Parts and accessories of machines for sizing man-made textile and Drive-axles. The top 5 products amount to 22% of total imports by India from Czech Republic. 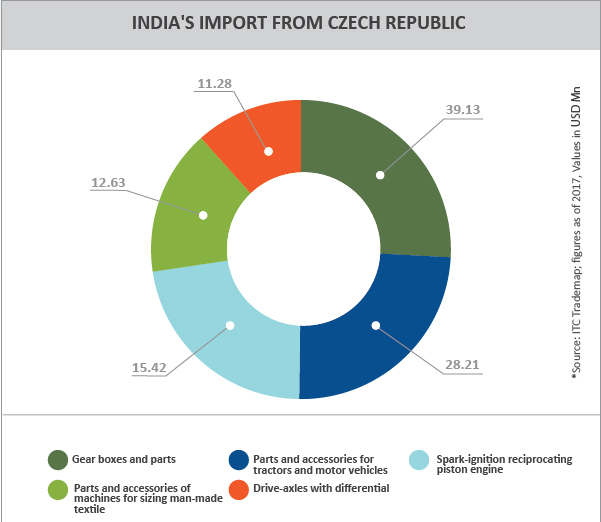 Czech Republic’s technology and engineering prowess may boost India’s “Make in India” initiative and ascertain its movement up the value chain. Czech Republic and India has moved further and have initiated engagement in exploring opportunities in sectors such as civil aviation, civil nuclear energy and solar energy.  It is a step in the right direction.