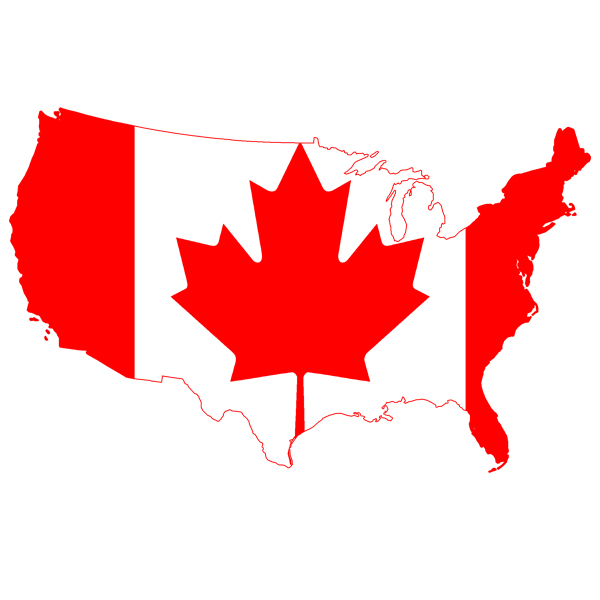 Canada’s economic competitiveness has been sustained by strong rule of law and the solid institutional foundations of an open-market system.

Canada boasts of an economic freedom score of 77.7, making the economy the 9th freest in the 2018 index. The country also has an ‘Ease of Doing Business Rank’ of 18 among 190 countries.

The 1989 Canada-US Free Trade Agreement and the 1994 North American Free Trade Agreement (which includes Mexico) dramatically increased trade and economic integration between the US and Canada. Also, due to its location, trade with the US is unavoidable for Canada. An estimated 80% of the country’s population lives within 100 miles of the US border, meaning that its regional economies have become integrated with and reliant on those of the US.

Canada and the US enjoy the world’s most comprehensive and highly balanced bilateral trade and investment relationship, with two-way investment stocks of nearly $700 billion. Over three-fourths of Canada’s exports are destined for the US each year. Canada is the largest foreign supplier of energy to the US, including oil, natural gas and electric power, and a top source of US uranium imports.

Canada resembles the US in its market-oriented economic system, pattern of production and high living standards. Since World War II, the impressive growth of the manufacturing, mining and service sectors has transformed the nation from a largely rural economy into one primarily industrial and urban.

It has a large oil and natural gas presence with the majority of crude oil production derived from oil sands in the western provinces, especially Alberta. Canada now ranks third in the world in proved oil reserves behind Venezuela and Saudi Arabia and is the world’s sixth-largest oil producer.

Given its abundant natural resources, highly skilled labour force and modern capital stock, Canada enjoyed solid economic growth from 1993 through 2007. The global economic crisis of 2007-08 moved the Canadian economy into sharp recession by late 2008, and Ottawa posted its first fiscal deficit in 2009 after 12 years of surplus only to emerge soon. Since the fall in world oil prices in 2014, Canada has achieved modest economic growth.

Canada exported US $420.5 billion worth of goods around the world in 2017, making it the 12thlargest exporter in the world. This figure represents roughly 2.4% of the overall global exports, estimated at US $17.5 trillion last year.

The country was also the 12th largest importer last year, importing a total of US $432.7 billion (2.4% of the total world imports) worth of products. 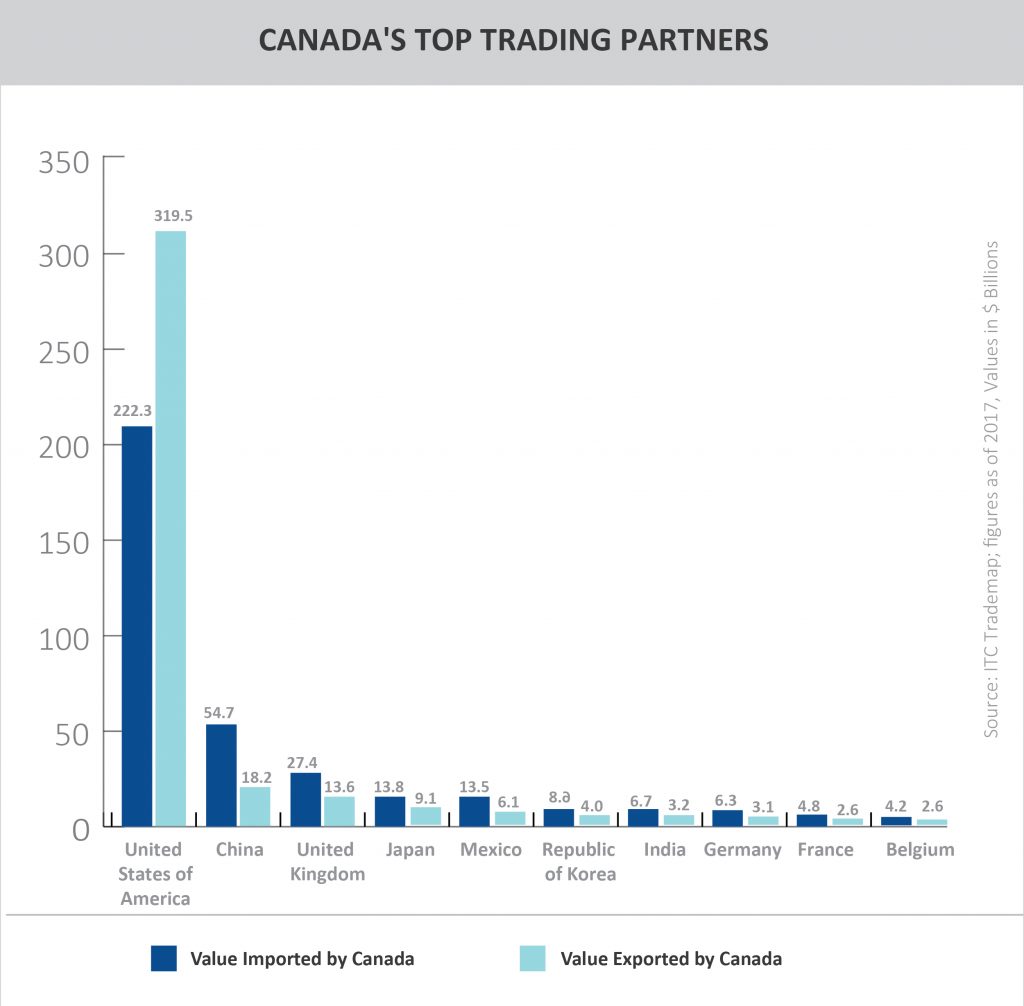 Canada’s exports from the world have followed its imports throughout.  In 2017, Canada had a trade deficit of US $12.2 billion. Its trade with the world has been going down since 2013. 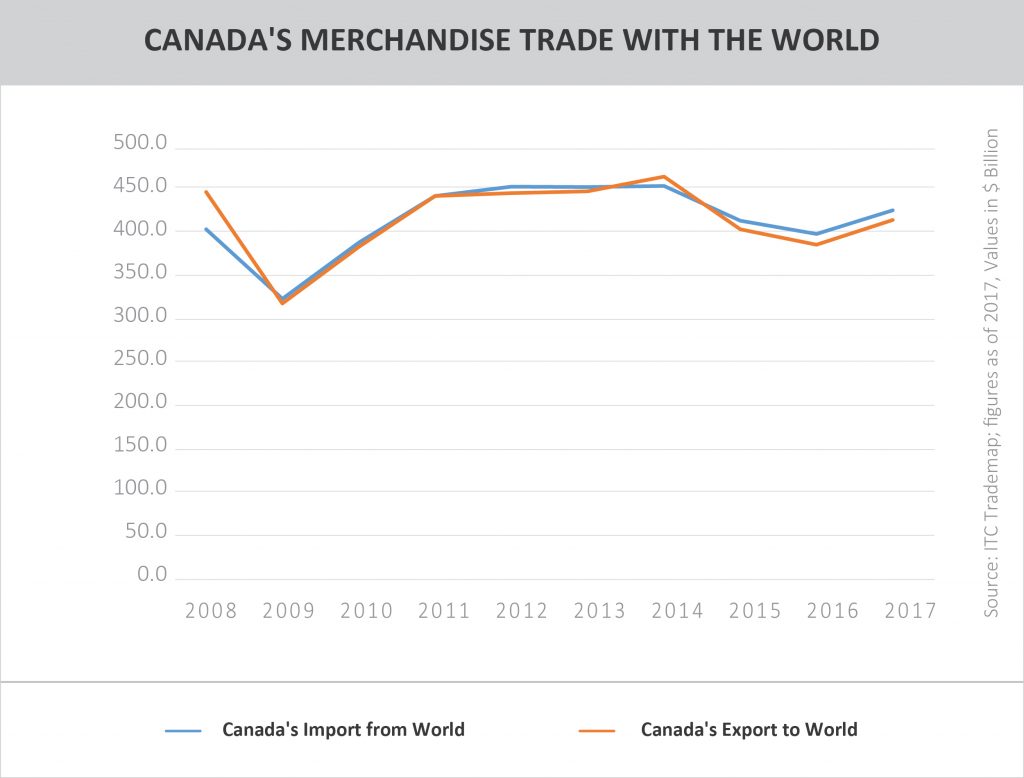 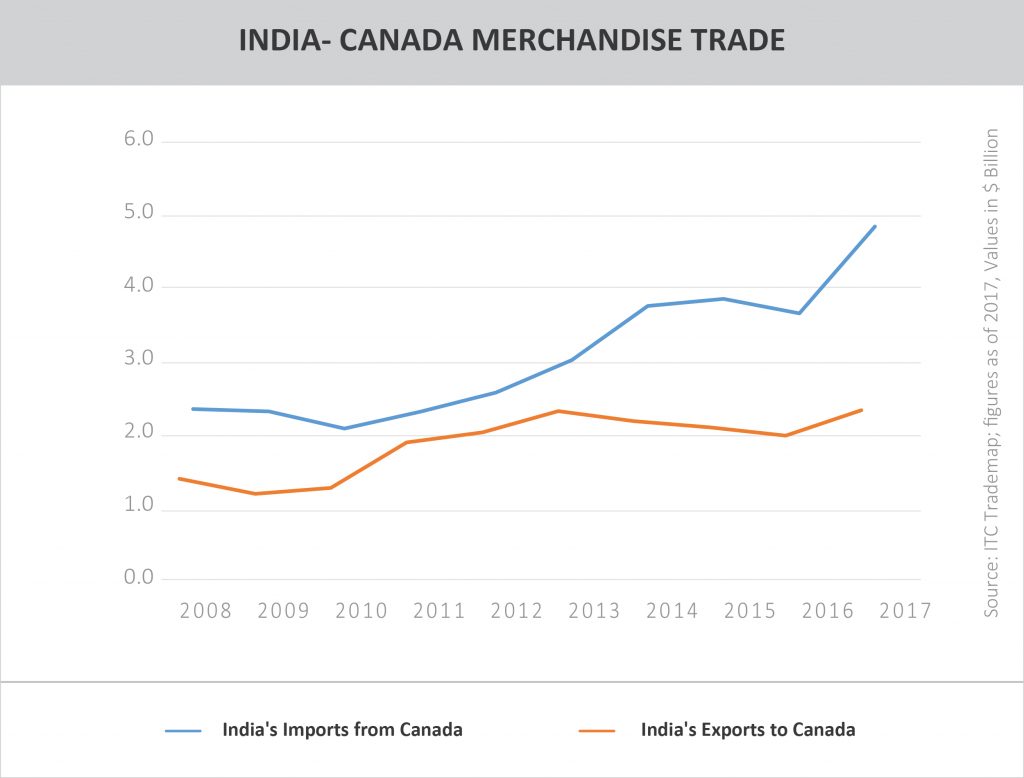 CANADA’S EXPORTS TO THE WORLD

Canada’s total export in 2017 amounted to US $420.5 billion. Its top export product at HS-6 digit level last year was Crude Petroleum oils and oils obtained from bituminous minerals, with a share of 12.9% in its export basket. This was followed by motor vehicles, unwrought gold, natural gas, medium oils and preparations & rape or colza seeds. 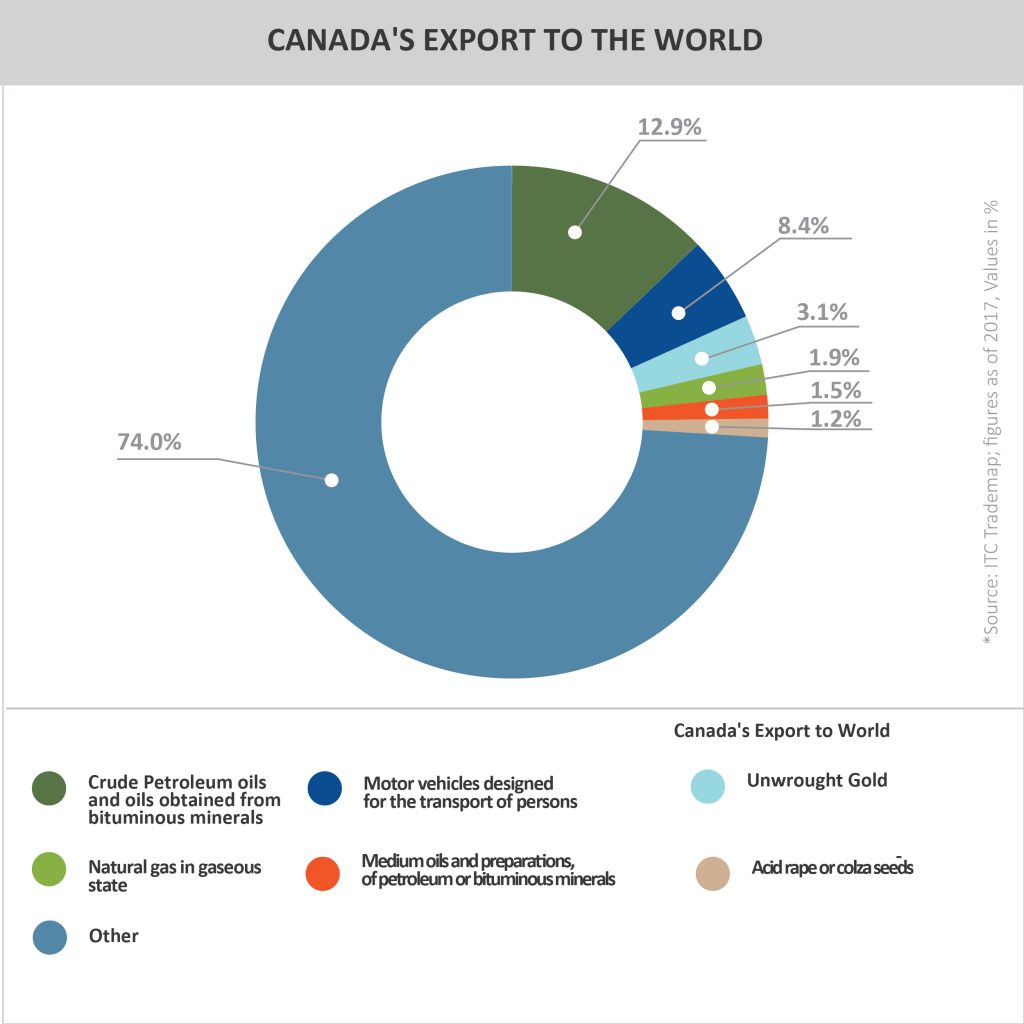 CANADA’S IMPORTS FROM THE WORLD

Canada’s import basket continued to be dominated by motor vehicles (US $13.8 billion) and petroleum oils (US $12.8 Billion), which together accounted for 8.6% of its total imports (US $432.7 Billion) at HS-6 digit level. For most of the products that Canada imported in 2017, there was a rising trade deficit on yearly basis, which shows Canada’s increasing quantum of imports. 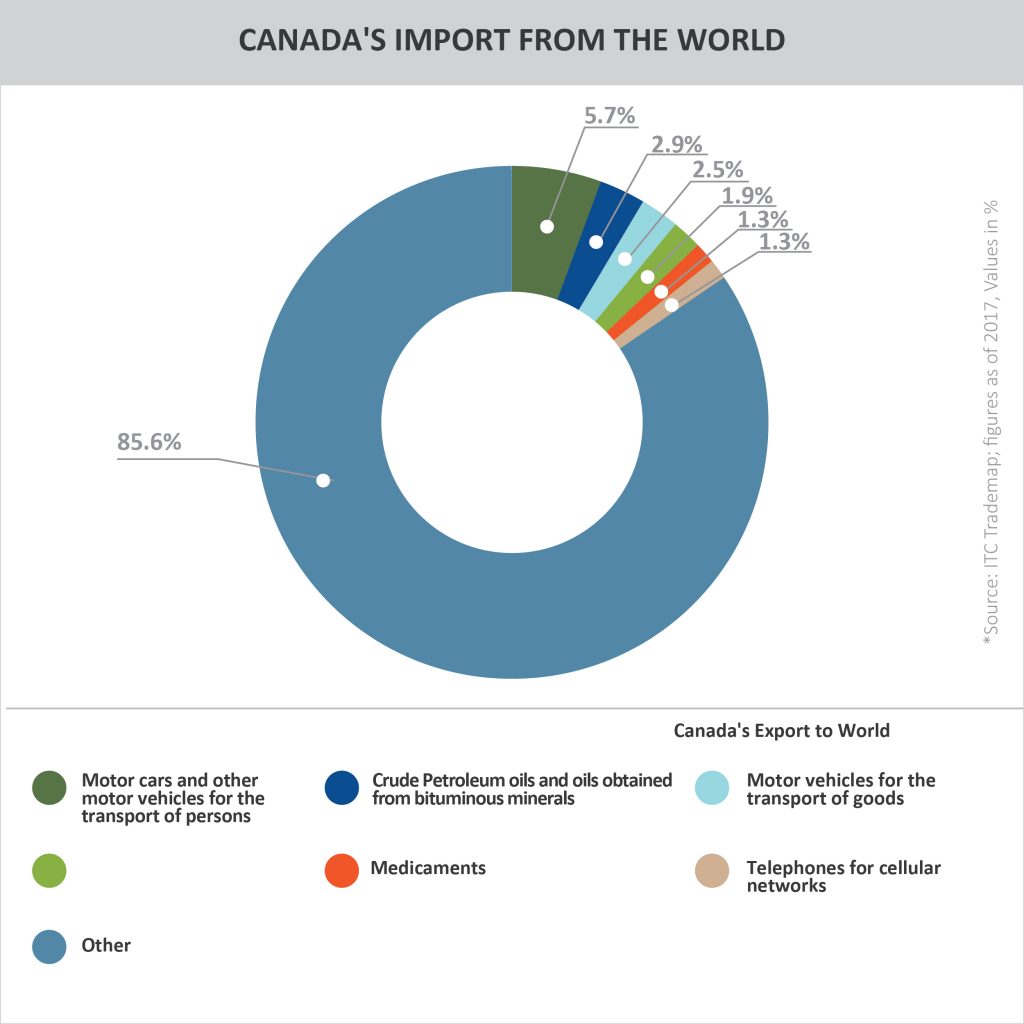 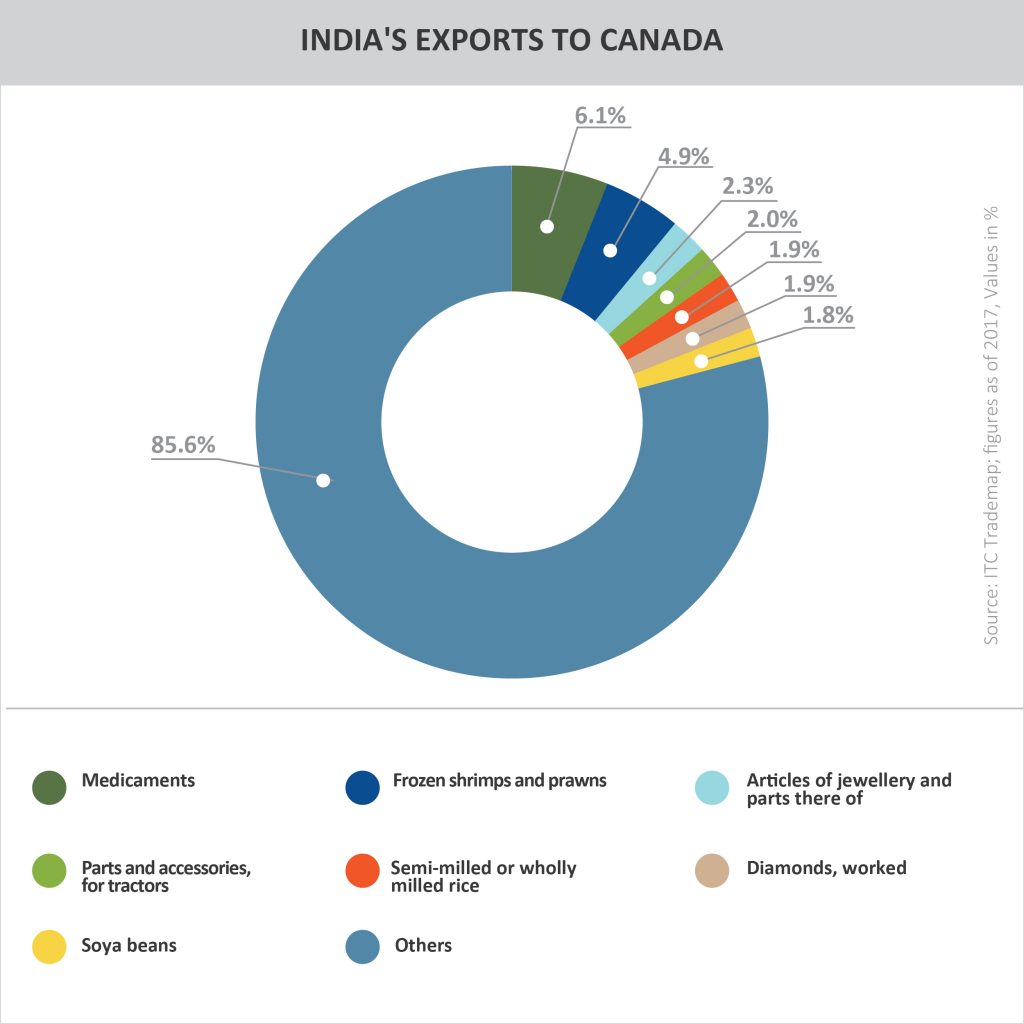 India’s total imports from Canada in 2017 were US $4.8 billion, leading India to have a trade deficit with Canada. India’s import was dominated by non-industrial diamonds (US $1.1 billion) and coal (US $598.8 million). 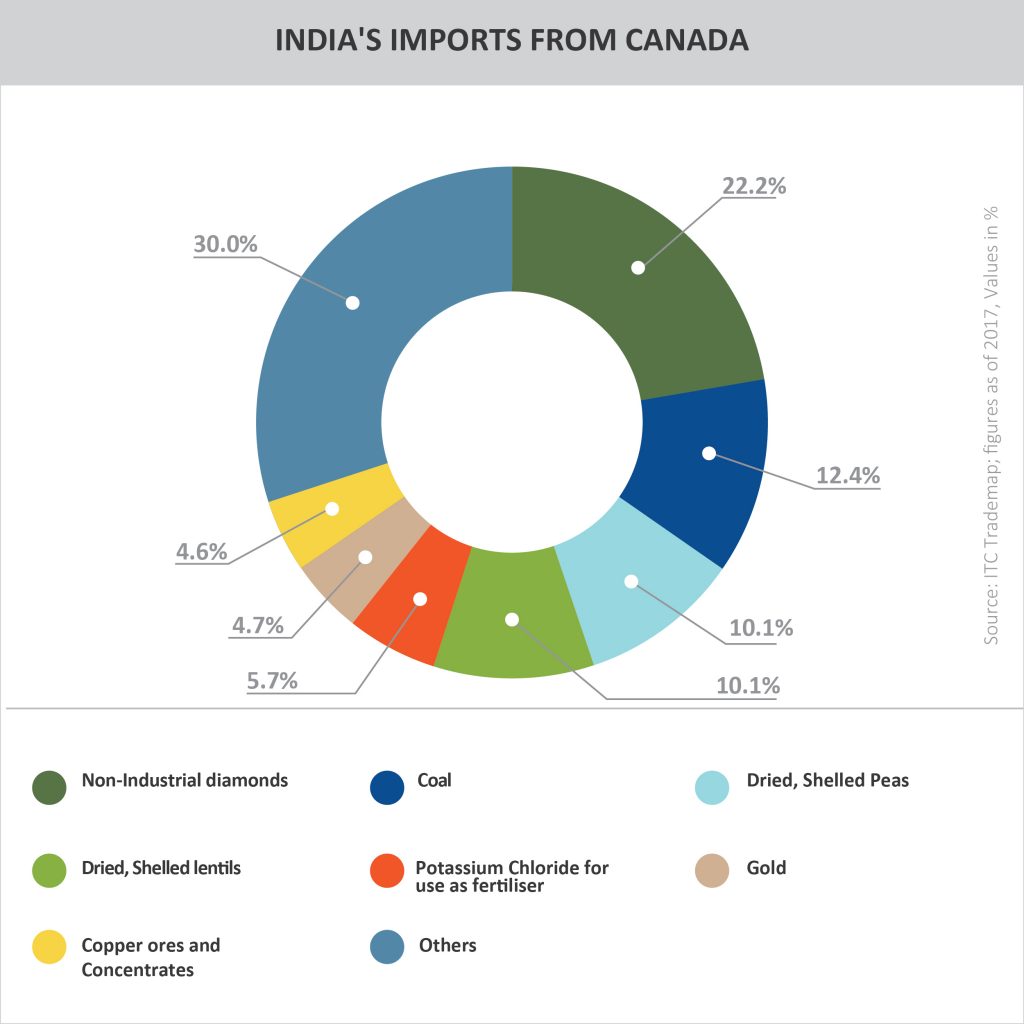 India and Canada are making efforts for expeditious conclusion of the Comprehensive Economic Partnership Agreement on goods and services. The agreement is focusing on some of the key commercial drivers to enhance the existing bilateral partnership between the two countries. The negotiations for this agreement were launched in November 2010 to boost the bilateral trade & investments and successful conclusion of the same will open up huge opportunities for both the countries in trade.